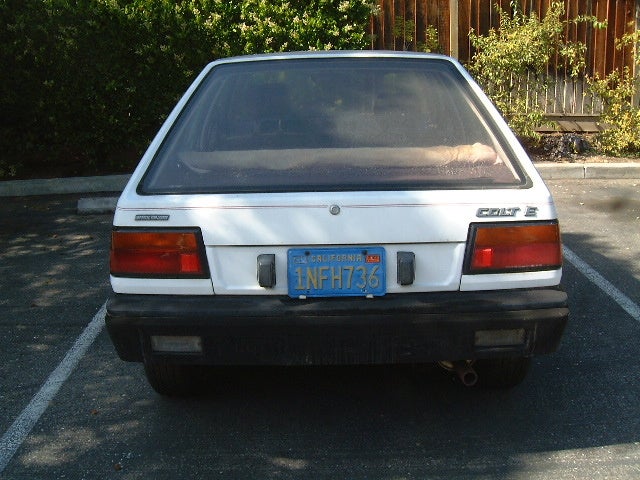 Have you driven a 1986 Dodge Colt?
Rank This Car

Small car but does the job for the type of vehicule it is, really solid car, it rarely ever breaks (excelent mitsubishi mechanic). I still own it and even tough I'd feel like changing, I can't find th... Read More

Wow! This Is Something Else For A Cheap Entry Level Lil Car! By P.J.

awesome handling, accelerates like a shot, hangs onto the road like it's on rails, seats are comfortable too... Read More

This was my first car ever. It got 50 miles to the gallon but it was very plain inside. Everything was plastic. It had a small tear in the door panel that always drove me crazy. I drove too quickly... Read More

The car is small so therefore it should be easy on gas. The car is also light weight so the insurance and registration should be fairly cheap. The cars also in great condition. It really benifits me b... Read More

My first car which I bought with just 4000km on it. Fantastic on gas and was great on reliability until it hit the 200k mark when the cooling system, tranny, suspension and brakes gave out, then a bi... Read More

If I Could Find Another I'd Buy It And Another As A Spare. By Clark_Hill

I bought the car new from a dealer in 1991 have now 433000 km on the clock. It has a two litre fuel injected engine and a 5 speed manual transmission. Its upright seating position huge green... Read More

Excellent For A Commuter , And Great All Around Prices By Spherris

I just bought mine but from what ive seen and heard they are very reliable and great $$$ savers on gas. Its quiet and has excellent space even room for a rack on top :) and affordable. Ty dodge please... Read More

Commuting To Work Or Family Transportation By Jessie

its performance is good but not the best dew to lak of acceleration it has very good braking handling is like every other car for the build quality its just the things basics that it needed in repairs... Read More

This car looks good. Has good gas millage, acceleration and is easy to work on. Hope to drive it until it falls apart has given us great service and still does. I have never had any regrets about own... Read More