As far back as 1970, an unlikely alliance between Mitsubishi Motors and the Chrysler Corporation led to the remarketing of Mitsubishi cars in the United States. Thus, the Galant became known here as the Dodge Colt, a subcompact car built on a Japanese platform. The result was affordability, durability, and great fuel economy.

The 1971 Dodge Colt was sold as a 2-door coupe or 4-door sedan. A more family-oriented 5-door wagon was also available. The Colts featured rear-wheel drive and a choice of two 4-cylinder engines, either a 1.4-liter or 1.6-liter rated at 85-hp. All came standard with a 4-speed manual transmission, and a 3-speed auto tran was optional. The basic interior was not a head-turner and certainly exemplified the term "no frills," but it did feature bucket seats in the front and rear, with the front seats able to recline or adjust for maximum legroom, and a tilt steering wheel column.

Though never as popular as its Pinto and Vega competitors, the Dodge Colt has held up well over the years due to its durable engine and Japanese engineering. Many show few signs of rust or wear, and its small size and gas mileage have made it a great first-timer car or bang-around city car.

Have you driven a 1971 Dodge Colt?
Rank This Car 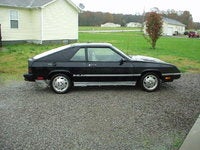