Filter Results
Made between 1979 and 1993, Fox Body Mustangs are regarded as the last old school square body Mustang, without the hefty price tag of 60s and early 70s models. Fox Body Mustangs underwent a few minor facelifts and were equipped with engines ranging from a 2.3L I4 to the famous 5.0L (well, actually 4.9L) small-block V8. A V8 Fox Body can be tuned to make some serious power, making these cars a popular choice for enthusiasts. Fox Bodies are far from rare, but many have been modified and driven hard. Be sure to look out for common issues, including: 1. Underbody rust, particularly by the strut towers, quarter panels, floor pans, and frame. Where the car has spent its life will determine the degree of rust. Cars from areas without much snow & rain will be much cleaner. 2. Body warping and deformities. The Fox Body's unibody design is not very stiff and can warp when driven hard. 3. Poorly executed modifications. Try to find a close-to-original example or one with clean build records if reliability is a concern. Shop the best deals and largest selection of Fox Body Mustangs on CarGurus: 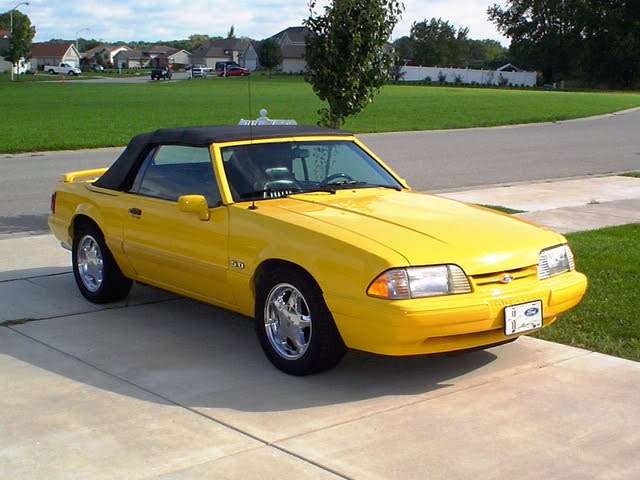 Save this search to get alerted when cars are added.
By clicking "Email me," you agree to our Privacy Policy and Terms of Use.
Image Not Available

David was extremely helpful throughout the whole process and went above and beyond for my first car purchase. This place has great cars, great prices, and great people.

Even though I ended up buying a vehicle I liked better elsewhere, I found battenkill to be very friendly and knowledgeable. They had a good selection at very good prices.

Dealer responded promptly and informed me the car is on hold pending a sale. They will let me know if and when the car may be again available .

Excellent service and overall experience purchasing a car here, didn't feel pressured and everything was completed in a timely manner. They even registered and did my plates for me. Honestly one of the best car buying experiences I've ever had

Excellent customer service. Replied right away to my inquiry. Very honest and transparent sales manager. Now if I can only get them to lower their price more. :-)

Completely rude and unwilling to answer questions. Even after explaining I would be coming from a distance and was very interested. Overall the customer service was seriously lacking.

Overall a short but pleasant experience. The ad had not been taken down and the car was sold. They did continue to try to get me to come up and look at a car, but I live 1000 miles away and was going to fly in if the car was available so that ended our buyer seller relationship. But they were very professional.

We purchased the vehicle sight unseen, everything done remotely. Colleen was great, very sweet and responsive. The car is perfect, exactly as described and shown in the pictures. Caesar was nice to work with through financing and at the pick up. Great overall experience. We would definitely use them again and would recommend to a friend.

Sal was honest and truck was as described. Solid transaction.

Best of the best ,5 out of 5 excellent customer service ,great dealer ,thank u for such a great service and I look forward doing business with U in the future

Very nice speaking to the owner cars are super nice and definitely looking to purchase my next car here.