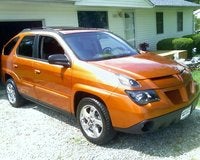 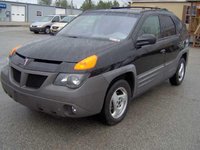 How To Tell If Vehicle Is A Base Model By Vin?

2001 Aztec Will It Start In Neutral Position Besides Parked Position

My '05 Aztek Vibrates While In Park Idling And During Accelerating

what is causing my '05 Aztek to vibrate through steering wheel, floor, and seat during idle...no matter if in Park, Neutral, or Drive?

Aztek Replaced The Thermostat And Know It Runs Hit And I Have No Heat In Ca...

i had to replace a bad radiator hose , it ran hot again not munch but enough i replaced the thermostat now it really gets hot . the gage gets up there fast. in a few minutes, no heat in car now i d...

04 Pontiac Aztek Overheating And Has Meal Debree On Engin

OK so we have a 04 pontiac aztek all wheel drive, we have changed several things in the car due to over heatin, new pluggs new water pump new wires .. at first it worked good then driving it to work...

How do you survive being called "the ugliest car in American history?" Sure, that comment came from Mad Magazine, but it reflected a general view of Pontiac's foray into the crossover market with the Aztec. Introduced to America as a grand prize on the first season of "Survivor" in 2001 (and like that show, people either loved it or hated it), that TV series has proved to be much longer lasting.

The Aztek was the first U.S.-produced crossover vehicle, a happy medium between station wagon and SUV for those wanting the versatility and solidity of an SUV with more car-like handling and better safety ratings. But the Aztek's Achilles' heel was its strange looks. Based on the Montana minivan platform, it looked like it had grafted the front end of a minivan to the bulk of an SUV and the rear body of a souped-up hatchback. It's too bad that we focus so much on appearance in this country, because according to owners, the Aztec handled smoothly, was incredibly comfortable and had more storage configurations and capacity than any SUV.

Aimed at an adventurous youth market, the Aztec offered some unique features. One was a removable front console that doubled as both a CD holder and a cooler. In the back, a special package included a built-in tent and blow-up mattress for car camping, enhanced by rear stereo controls and a lighter. A drop-down tailgate made loading and partying easier. Another unique feature was the fold-down front passenger seat. With the fold-down rear seats, this created 93 cubic feet of cargo space and could easily fit oversized or long objects. The dash was designed by a former NASA engineer, and another unique option here was the heads-up display, a design that's used by fighter pilots to access readouts in the least distracting way.

Sales were disappointing for the Aztek, and some feel that Pontiac never spent enough time marketing what made the crossover so cool and fun to drive. Owners say it was responsive, handled easy, got great gas mileage and was fairly speedy. The cargo capabilities were its biggest draw. Beyond the funky looks, other complaints centered on poor rear visibility due to the spoiler placement, and a heavy hatch that never closed properly. An underpowered engine and poor depreciation also did not sit well with owners. We wonder if "Survivor" winner Richard Hatch still owns his.