Looking for a New Volvo XC60 in your area?

The XC60, the “just right” midsize crossover SUV, rolls on as one of Volvo’s best-selling models. 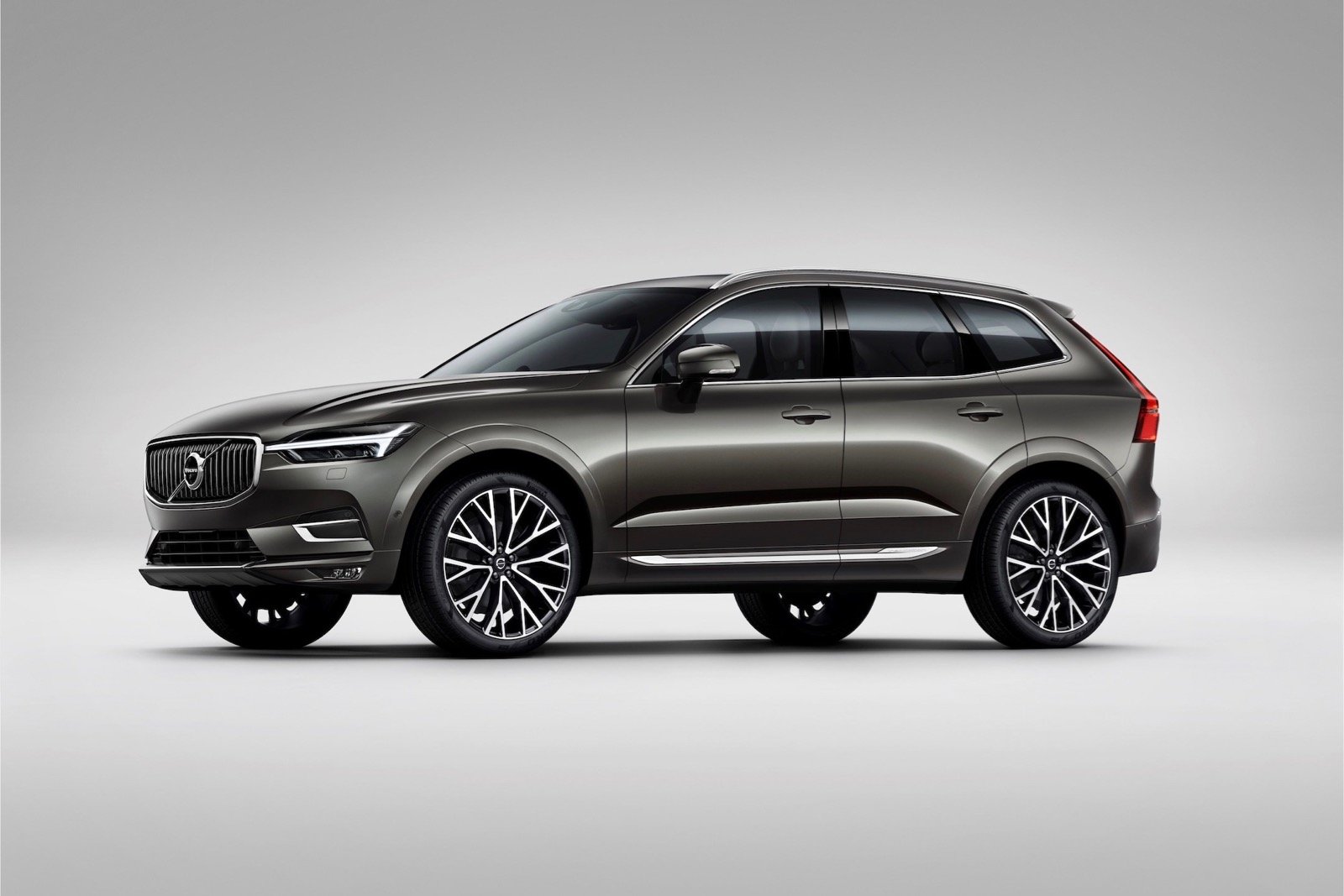 In the middle of a very competent trio of crossover SUVs, the 2021 Volvo XC60 impresses with luxury-level appointments, cool Scandinavian style, exceptional safety features, and a lusty powertrain. Volvo makes a case for its inclusion in the premium vehicle class with the XC60, and it manages to squeeze value out of every drop of gas, too. 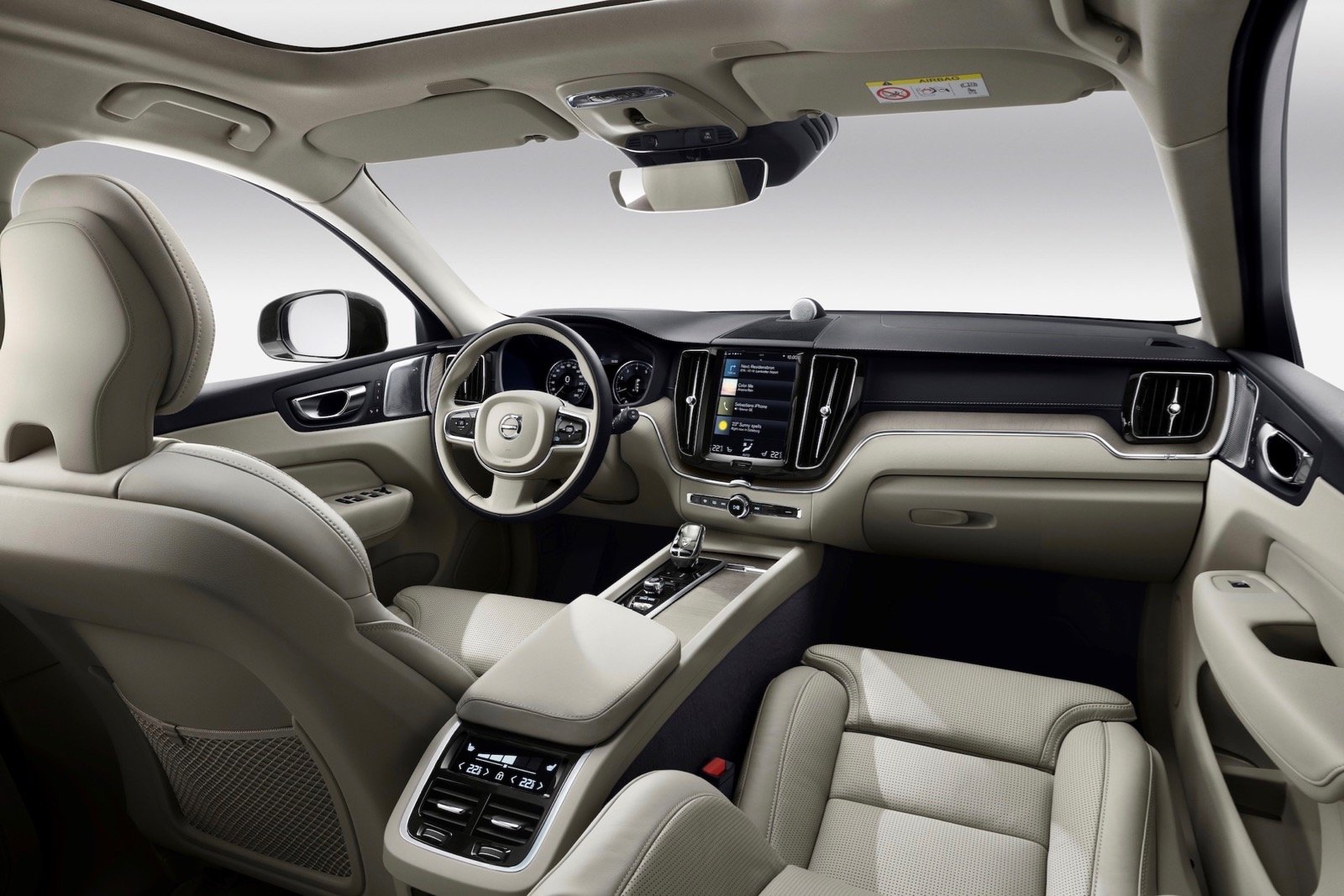 Though it’s not news any longer, it’s worth noting: Volvo, the Swedish car brand, hasn’t been purely Swedish in a long time. After 72 years of independence, the company was purchased by Ford in 1999. Ford owned Volvo until 2010. During that ownership, Volvo cars were forced to share platforms and engineering with Ford brands, leading to some very odd “synergy,” with some Ford, Mazda, and Volvo models riding on the same platforms and using a lot of shared parts. Soon after the economic crisis of 2008, Ford sold Volvo (and a lot of other brands) to outside buyers. Volvo was snapped up by Geely Holding Group, a gigantic Chinese company. The move turned out to be a rebirth for Volvo, as they could shed their Ford shackles and behave like a startup car company with new platforms, engineering, and goals. With Geely’s support, Volvo became a startup with nine decades of experience in the car business. The product lineup has emerged as a near-luxury collection of cars and crossover SUVs, consistently among the safest-rated and most innovative lineups anywhere.

Right in the middle of the Volvo crossover lineup, between the compact XC40 and larger mid-size XC90, sits the 2021 XC60. Now in its second generation of production, the XC60 has been built on Volvo’s SPA (Scalable Product Architecture) platform since the 2018 model year, a platform it shares with the other 60-series (S60 sedans, V60 wagons) and 90-series (XC90 crossovers, S90 sedans, V90 wagons) vehicles.

Volvo’s crossovers share a common look, an elegant, tailored crossover two-box design with short front and rear overhangs. The body sides are tucked in athletically, and crisp details across the body emphasize a very agile form. The upright grille at the front of the XC60 proudly wears Volvo’s iron mark logo, and the front headlights have an LED daytime running light in the shape of Thor’s hammer, the most Swedish design element you’ll ever find on an SUV.

Paint quality, chrome, and trim are all beautifully executed, and the big alloy wheels (up to 21 inches on top trim levels) are fashionable and attractive.

Inside, things are even better. We hate to fall back on “Scandinavian” as a style descriptor so frequently, but the clean lines, authentic materials, and serene aura in the cabin define the term. Volvo was early to the party with big, portrait-oriented infotainment touchscreens, and the 9-inch display at the top of the XC60’s center stack is much easier to accept now than it was in 2018.

As with any interior, it’s the little details that elevate XC60 to near-luxury status. The elegance of the HVAC vents, often an afterthought in interior design, impresses with both shape and operation. A single, grooved, chromed knob controls lateral direction, vertical direction, and airflow—simple, elegant, and beautiful. Textures and colors throughout the cabin are harmonious and rewarding. It’s a very nice place to spend time. 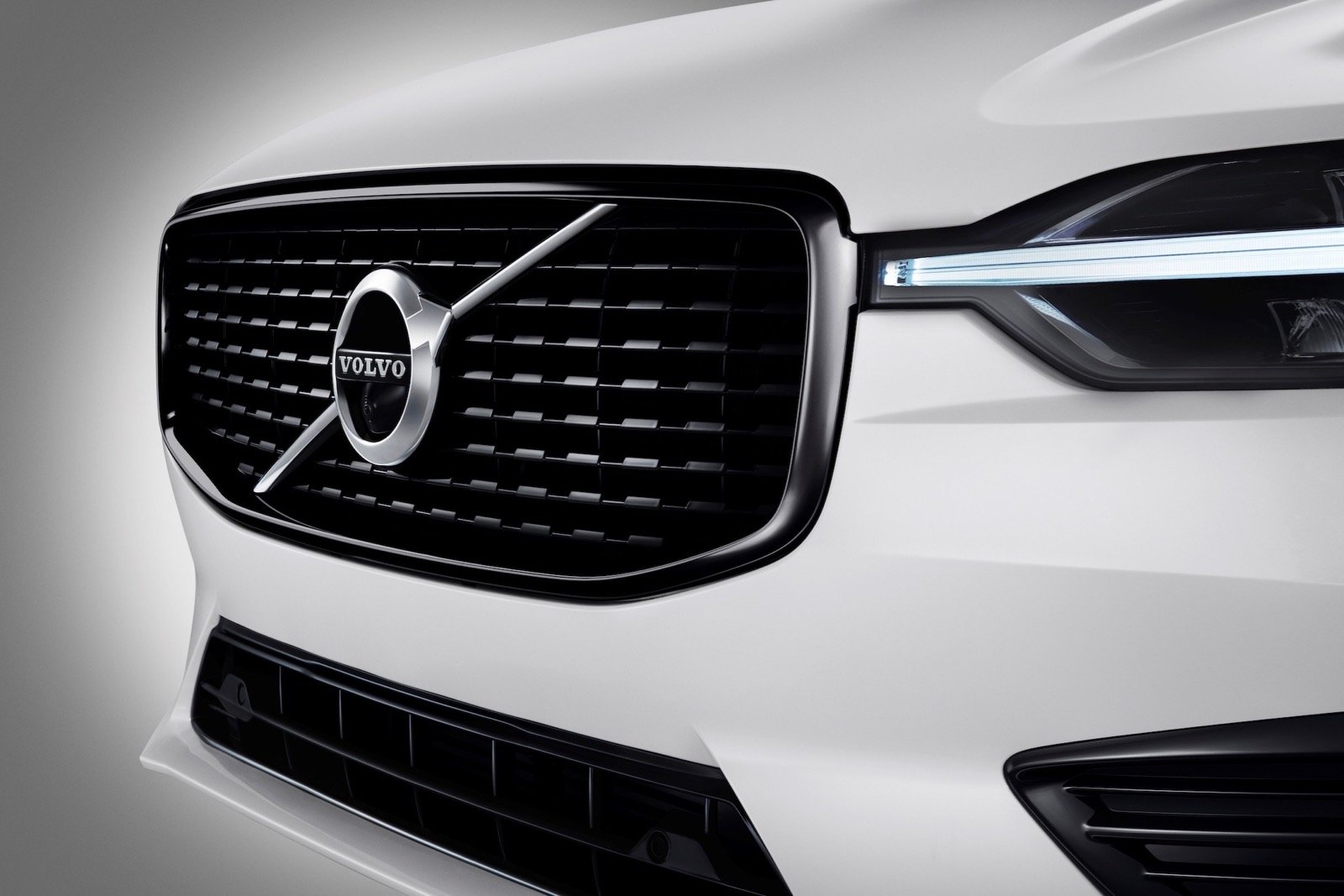 Each XC60 uses a four-cylinder, 2.0-liter gasoline engine and an eight-speed automatic transmission. T5 models come with front-wheel drive (FWD) or all-wheel drive (AWD), while T6 and T8 models get AWD only.

T5 models use direct gasoline injection and a turbocharger to produce 250 horsepower and 258 pound-feet of torque; T6 models use direct gasoline injection, a turbocharger, and a supercharger to produce 316 hp and 295 lb-ft of torque; T8 models add an 87-hp electric motor to the mix, bringing horsepower up to 400 hp (combined), and torque up to 472 lb-ft (combined). Finally, the T8 Polestar Engineered model gooses things a little to a state of tune that pumps out 415 hp (combined) and 472 lb-ft of torque (combined).

Our test vehicle was a top-of-the-line XC60 T8 Polestar Engineered, the most potent variant in the lineup. T8 models are also plug-in hybrid vehicles (PHEV), which means that you can drive for limited distances (up to 19 miles) on electric power. At other times, the XC60 behaves like a hybrid gasoline-electric vehicle (which it is), making smart decisions about when to engage the electric motor, when to recapture energy from the brake system, when to throw caution to the wind and boost gasoline engine performance.

The XC60 benefits from that “just right” size and bulk, and feels solid and secure on the road without feeling like a truck. Thanks to the AWD system and torque vectoring, XC60 glides around corners without drama and is very easy to drive quickly. The cabin is serenely quiet, and the suspension smooths out all of the bumps. The XC60 would be a great road-trip car for a small family. 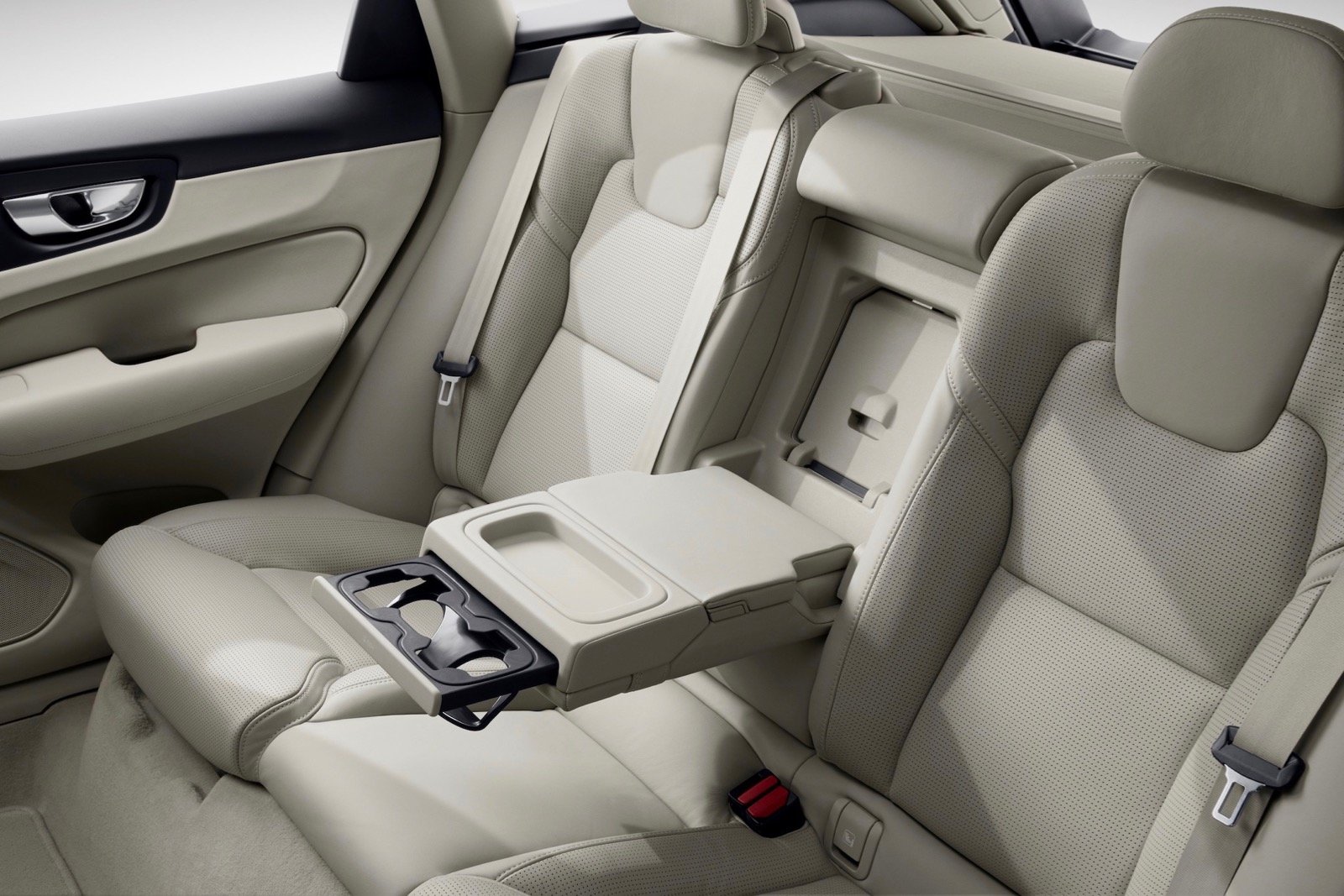 The XC60 is very well-designed for its intended purpose—getting people safely from point A to point B in comfort and style with serenity, and even some fun.

Volvo’s seats rightly garner praise, especially in the front row, where adjustability is king. Our testing period was in the dead of winter, and the XC60 showed off the Swedish ability to deal with nature. The crossover’s heating system up to the challenge of sub-freezing Michigan winter temperatures, while the heated driver and front-passenger seats warmed very quickly to give comfort. Not only that, the assertive rear glass heater and windshield defroster, washer, and wipers conquered ice and snow buildup better than almost any other vehicle we’ve tested. We’ll have to spend some time driving an XC60 in the summer in Arizona for a complete evaluation, but Sweden seems to have this winter thing licked.

We’ve already mentioned the elegance and functionality of the HVAC vents. That theme continues throughout the cabin, with smart storage in the center console, dashboard, and door panels up front. In the second row, secure storage in the seatbacks, in the lower center console, in the door panels, and in the center armrest is very useful, and all of the controls for passengers are intuitive and glove-friendly (there’s that Swedish winter genius again). 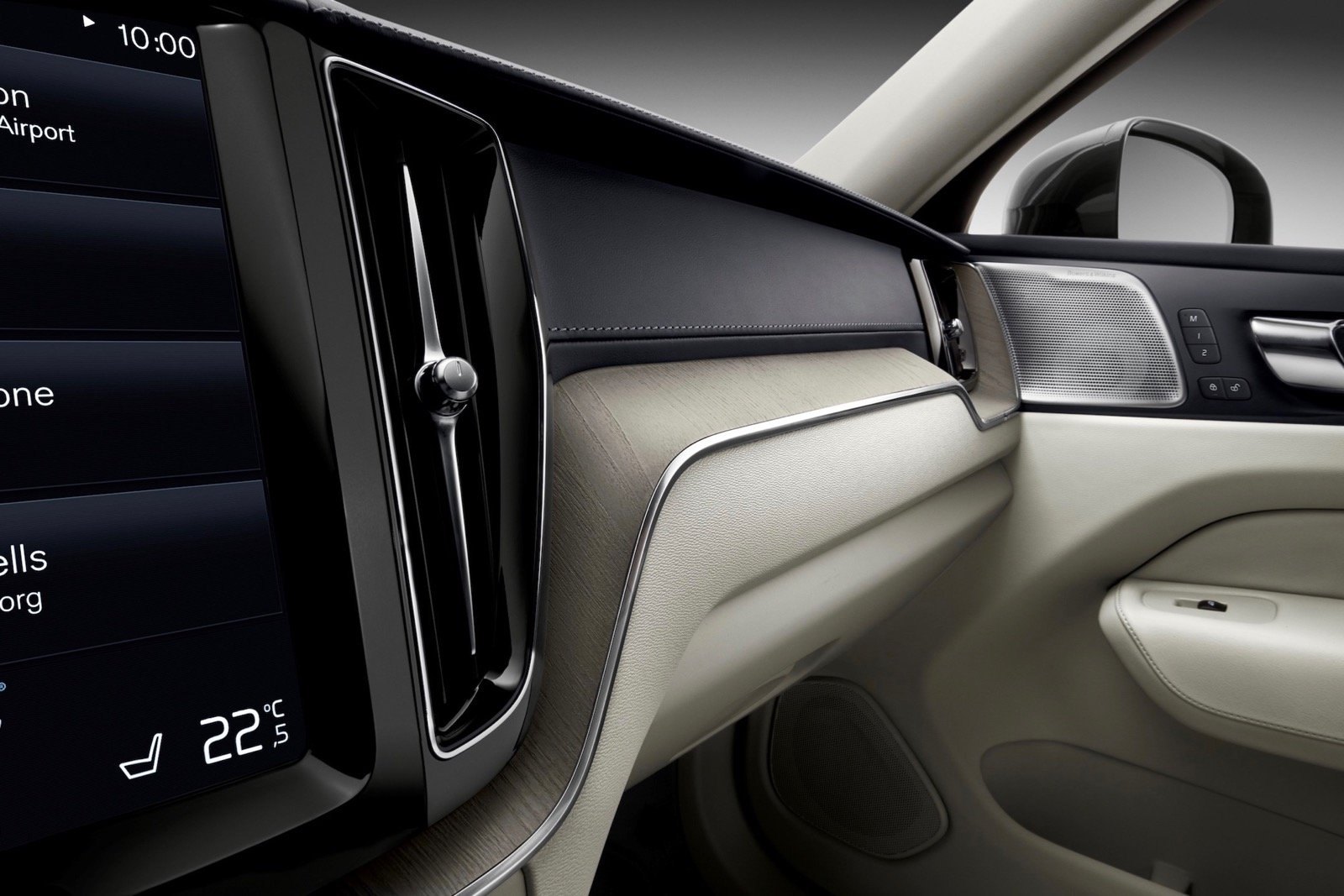 Volvo’s infotainment technology is centered around its Sensus system. The infotainment system, which uses a tablet-style touchpad interface, is a love-it-or-hate-it affair, capable of inspiring devotion or rage, depending on who is using it and how they engage with technology. Frequent iPad users will find its swipe, pinch, and pull gestures very familiar. The portrait orientation of the Sensus touchpad even resembles an iPad mounted into the dash. The Sensus innovation, which has since been duplicated by other systems, was the segmenting of the screen into function quadrants. At startup, the home screen displays horizontal bands of function – audio, navigation, vehicle, communications, for instance. Touch the quadrant you wish to activate, and it takes over the screen so you can input commands. Touch a conveniently located hard button at the bottom of the screen, and you return to the home screen, ready to engage other functions. It can be intuitive, simple, and easy to operate, but there is a learning curve and you have to be willing to put in the time to get familiar with it when you’re not driving. Trying to figure out nested functions, like fundamental settings, can be distracting and infuriating while you’re driving. Don’t do it.

Volvo’s audio systems are always good, but the Bowers & Wilkins premium audio system on our test XC60 was really exceptional, with good looks to boot. 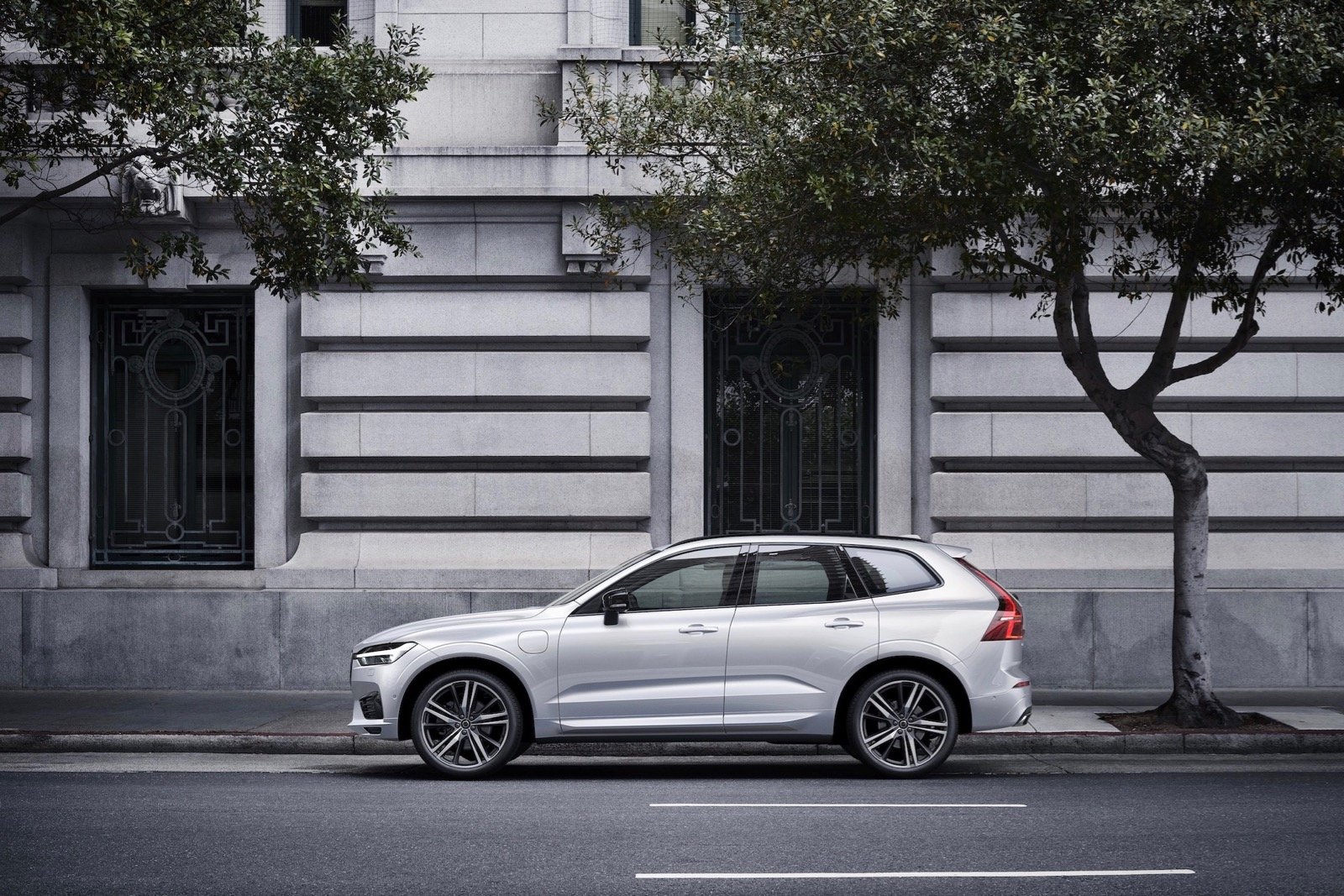 Volvo is justifiably proud of its heritage of safety innovations and has made continuous commitments to occupant and pedestrian safety over the years. Any Volvo employee will be proud to tell you the company invented the three-point safety belt, one of the most important innovations in the history of car safety. Though the company’s Vision 2020 goal, “that by 2020 no one should be killed or seriously injured in a new Volvo car,” did not come to pass, the philosophy led to safety improvements and harm reductions, and it still guides the company.

The XC60 is a beneficiary of this heritage and philosophy in practice. The 2021 XC60 was awarded a Top Safety Pick+ rating from the Insurance Institute for Highway Safety (IIHS), and the XC60 T5/T5 AWD and XC60 T6 AWD received five-star ratings from the National Highway Traffic Safety Administration (NHTSA).

Volvo’s semi-autonomous driving system, Pilot Assist, is available. This hands-on-the-wheel system integrates adaptive cruise control with lane-keeping assist and other technologies to maintain speed and position relative to other vehicles and road markings, and it can bring the XC60 all the way to a complete stop when necessary.

Volvo is one of the few manufacturers to boast about restricting the top speed of its vehicles for safety’s sake. XC60 is governed to a top speed of 112 mph, which should account for most driving situations in the United States.

Though it’s not a safety feature, per se, the gold safety belts on the T8 Polestar Engineered model add a flair to the concept of safety in a way few features can match. 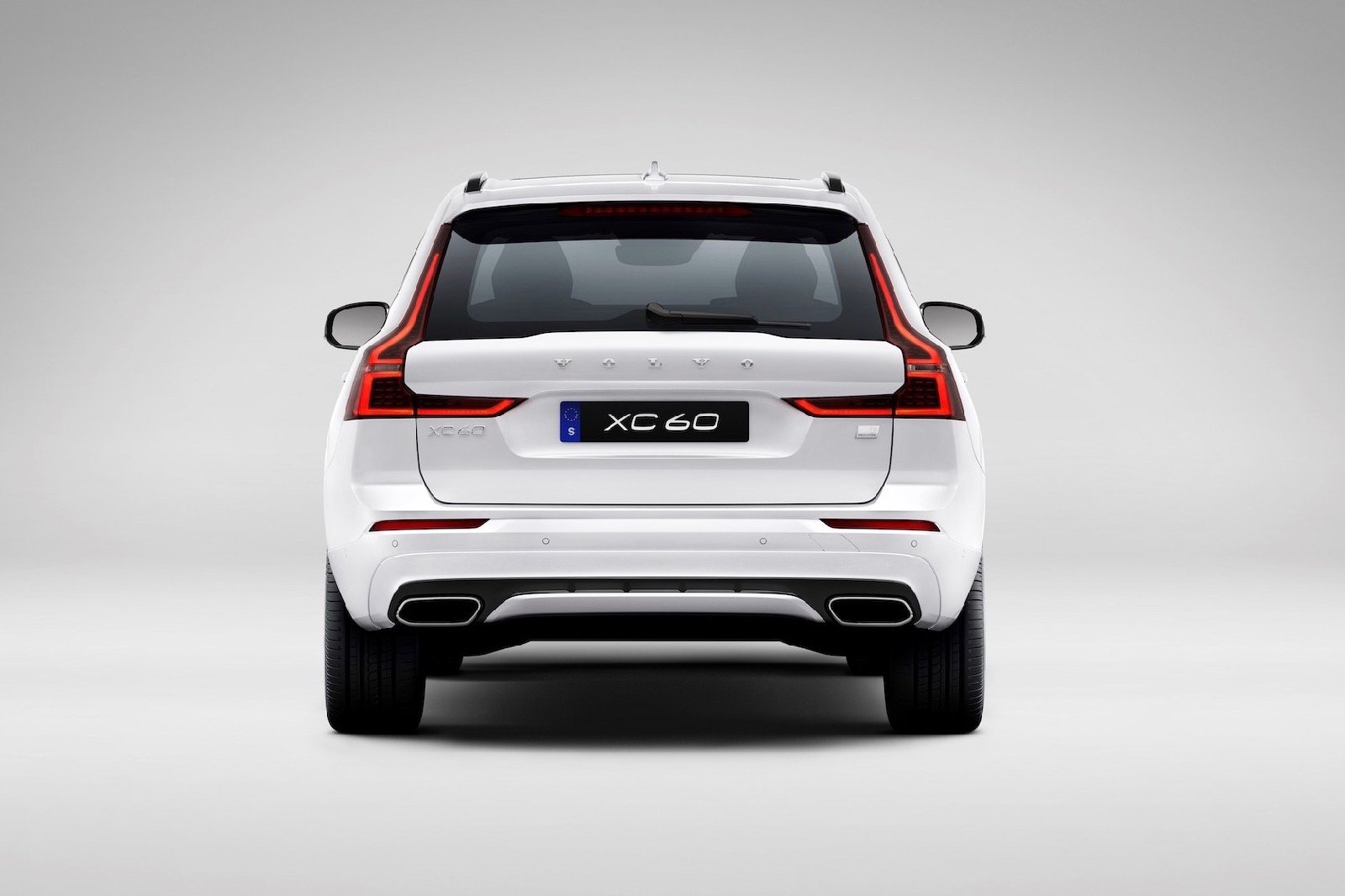 The two-row crossover class has a lot of worthy competitors for the XC60. Be sure to check out the Cadillac XT5, Audi Q5, Mercedes-Benz GLC-Class, Range Rover Velar, Lincoln Nautilus, Acura RDX, and BMW X3 on the luxury side, and the Volkswagen Atlas Cross Sport, Nissan Murano, and Jeep Grand Cherokee on the popular side. As you can see, the XC60 really is in the thick of it.

Volvo is never going to take over the automotive industry, nor is the XC60 destined to be among the top-sellers. But for a certain kind of driver, a certain kind of owner, the Volvo mythos, philosophy, and aesthetic is a perfect match, and the 2021 Volvo XC60 is the perfect vehicle. Are you that owner? You’ll only know if you drive an XC60 and test it against its competitors.

Enter your zip to see incentives for a new XC60 in your area.