Looking for a New Toyota Camry in your area? 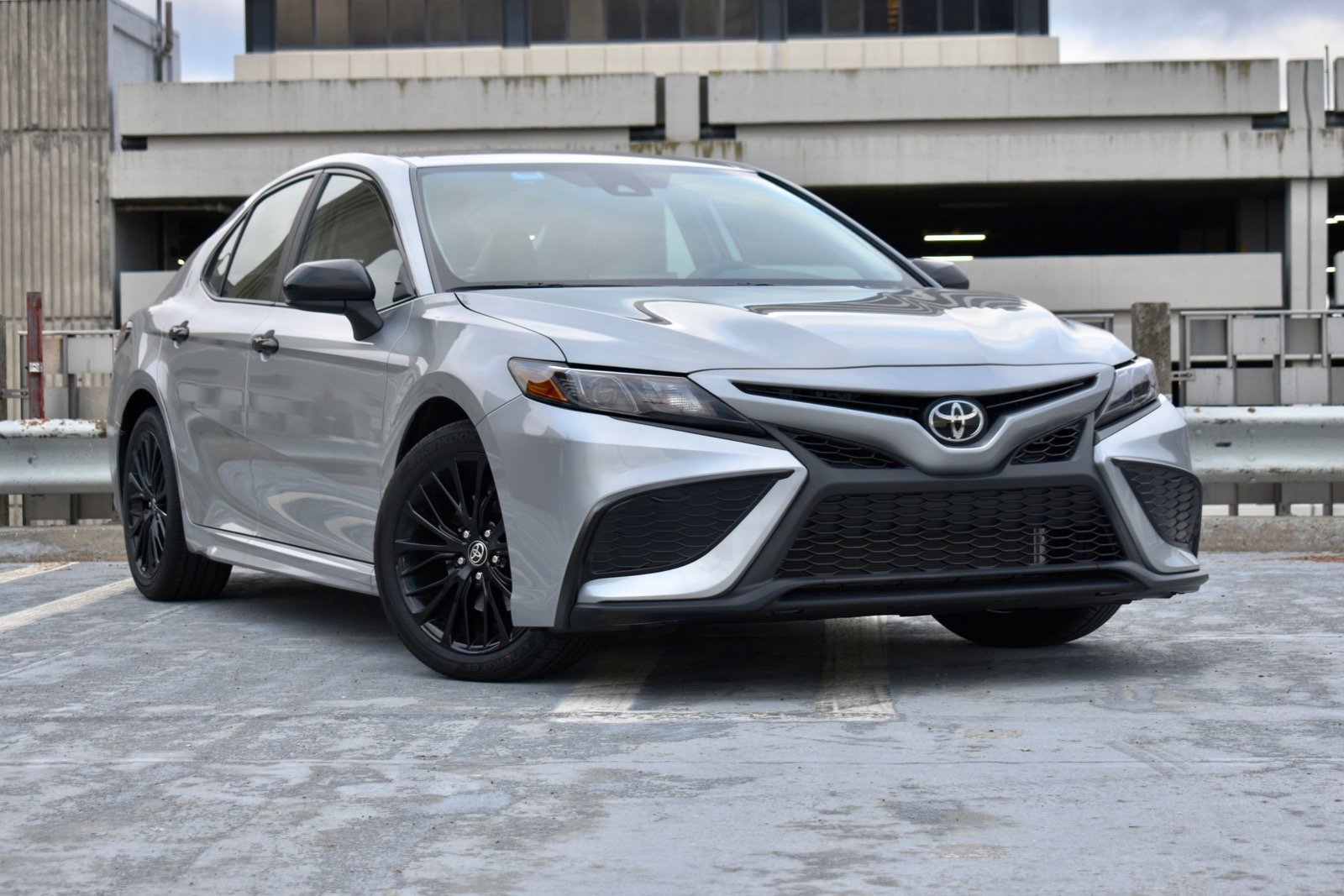 The Toyota Camry has long been many new-car buyers’ default choice—but not because it’s interesting. Reliability and practicality have traditionally been the Camry’s strengths, not sportiness or style.

Toyota tried to change that for the 2018 model year, when the Camry was last redesigned. The current-generation Camry adopted more extroverted styling, and engineers tried to make the driving experience more exciting, too. While Toyota’s approach has changed, the Camry still competes against the same array of midsize sedans, including the Honda Accord, Hyundai Sonata, Mazda 6, Nissan Altima, Subaru Legacy, and Volkswagen Passat.

Changes for the 2021 model year include subtle styling tweaks, new infotainment displays, an upgrade to the Toyota Safety Sense 2.5+ (TSS 2.5+) package of driver aids, some changes to the dashboard trim, and the discontinuation of the Camry L trim level. That leaves the Camry LE as the new base trim level. 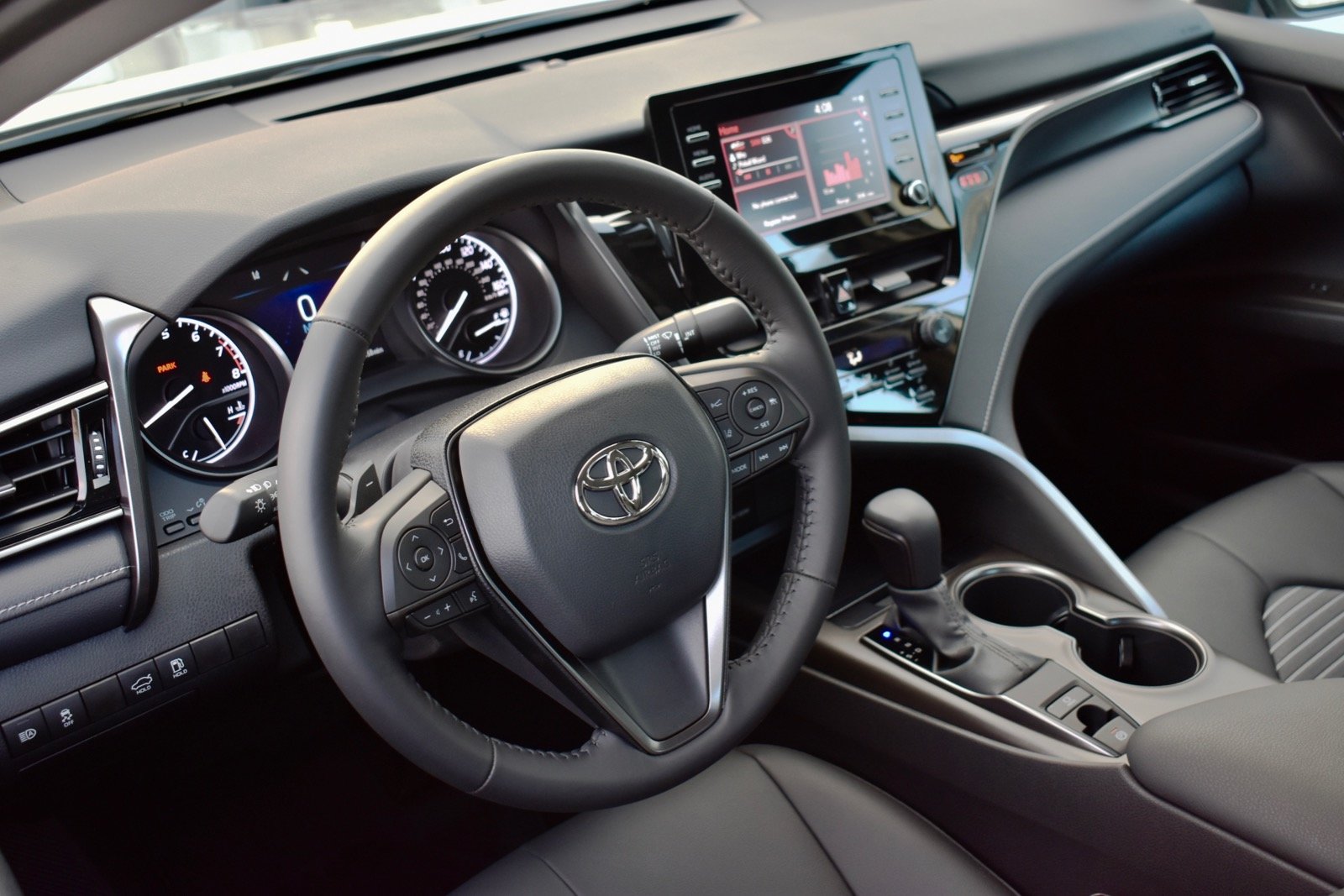 The 2021 Toyota Camry works hard to distance itself from past Camry models, which often looked like the generic cars from driver’s ed textbooks. Like other recent Toyota models, designers tried to make the Camry exciting by piling on styling details.

Some of the styling elements work, such as the flared wheel arches and thin headlights and taillights, which visually widen the car. However, if you opt for the SE, XSE, or TRD trim levels, the Camry is festooned with fake vents that add a lot of visual clutter. LE and XLE models get a different grille that’s somewhat cleaner, but still massive. Under the skin is the ubiquitous TNGA-K platform shared with many other Toyota models, including the larger Avalon sedan and the RAV4 SUV.

Toyota changed the front-fascia styling on most trim levels for the 2021 model year, but the differences aren’t too dramatic. As before, the TRD performance model gets some unique styling elements like a larger rear spoiler.

The Nightshade Edition also carries over from the 2020 model year. It’s based on the SE trim level, but it features blacked-out exterior trim and wheels. Speaking of wheels, 17-inch alloy wheels are standard on the base LE trim level, with 18-inch and 19-inch wheels available on other models.

The interior has the same chaotic styling as the exterior. The dashboard of our SE Nightshade Edition tester looked like it was made from the parts of two separate cars. Toyota threw a lot of different trim elements at the interior—including contrast stitching, piano black plastic, and plastic trim that looked vaguely like carbon fiber (XLE and XSE models get leather upholstery)—but there doesn’t seem to have been an overall design theme. The materials also looked and felt low-rent. 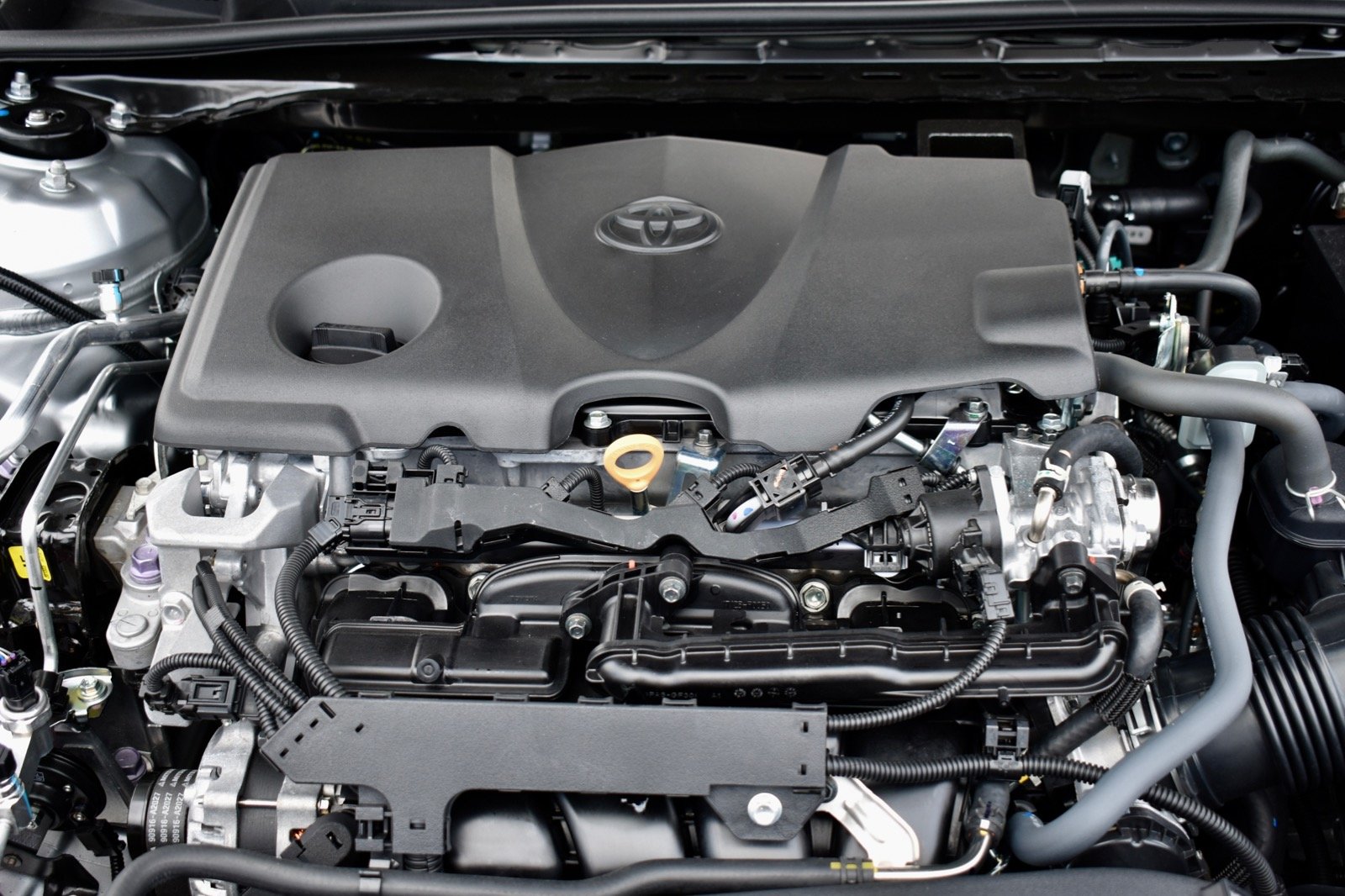 While most other automakers have opted for downsized turbo-four engines, Toyota still offers a naturally-aspirated 3.5-liter V6 in the Camry, with 301 hp and 267 lb-ft of torque, and the same eight-speed automatic as the four-cylinder engine. Finally, the 2021 Toyota Camry Hybrid combines a 2.5-liter four-cylinder engine with electric assist, for a total system output of 208 hp. The V6 and hybrid powertrains are only available with FWD.

Our SE Nightshade Edition test car had the base four-cylinder and AWD. That might not sound like the most exciting setup, but that’s where the Camry surprises. Besides offering a decent amount of grunt, the Dynamic Force engine lived up to its name with a bubbly, eager-to-rev nature worthy of a sports car or hot hatchback, let alone a family sedan. It even had a nice sound.

Chassis tuning struck a good balance between handling and ride quality. The Camry was surprisingly fun to toss into corners but didn’t punish the driver with a stiff ride. Steering lacked feel, but was very responsive and precise, making it easy to set up for corners. Overall, this Camry wasn’t as sharp as a Honda Accord or Mazda 6, but still above average for this segment. In stark contrast to previous generations of Camry, it actually rewards people who enjoy driving.

The driving experience was also impressive because we didn’t even have the sporty Camry TRD model. Introduced for the 2020 model year, the TRD (short Toyota Racing Development) pairs the stock V6 powertrain with a handful of chassis upgrades, including lowered suspension with stiffer coil springs and sway bars, and TRD shocks, bigger brakes, and available Bridgestone Potenza summer tires.

Toyota brought back AWD for the 2020 model year (it was previously offered on the Camry from 1988 to 1991), and the setup remains the same for 2021. Derived from the RAV4 AWD system, it can send up to 50% of torque to the rear wheels but reverts to FWD when extra traction isn’t needed. Toyota says the added hardware doesn’t impact passenger or cargo space. 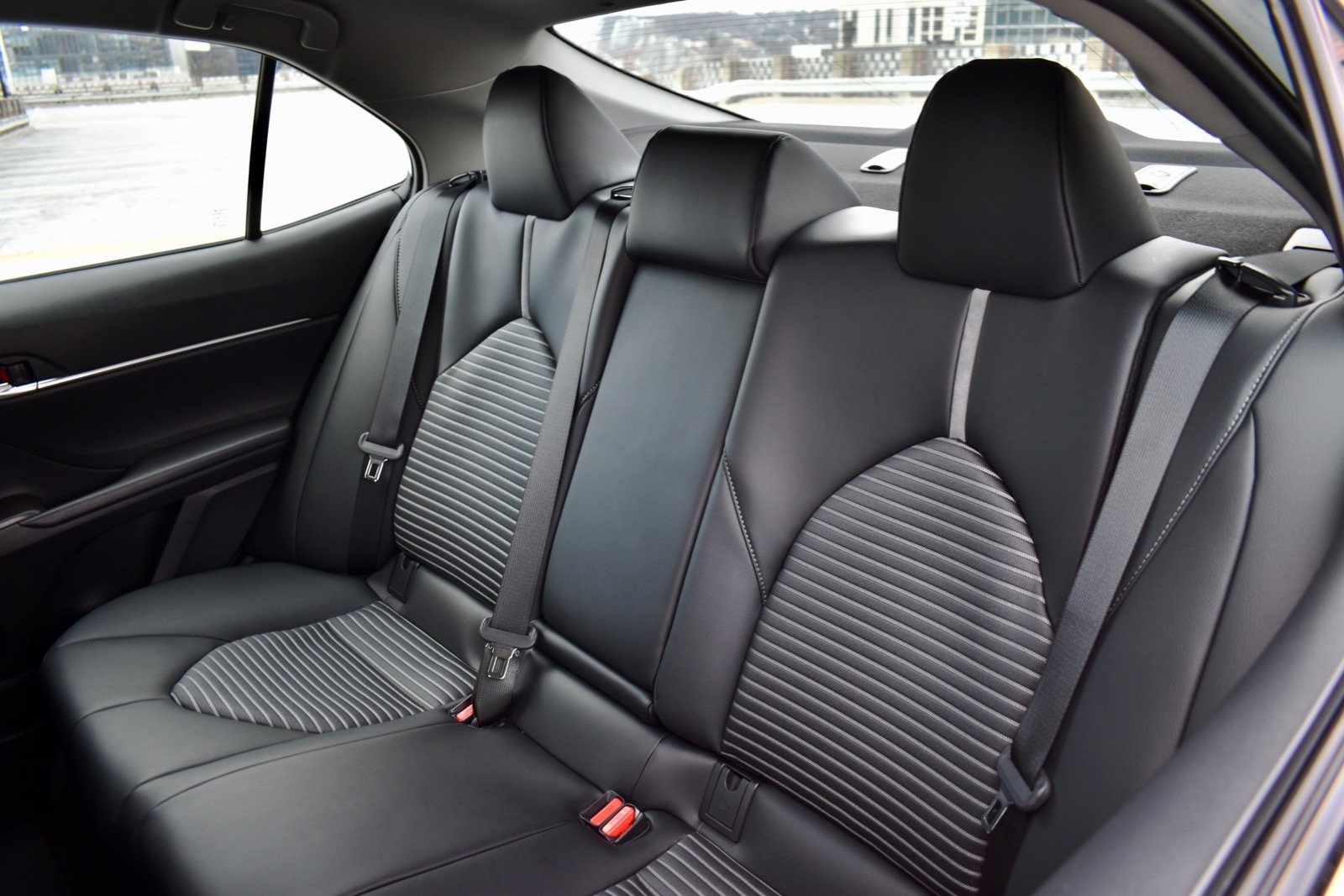 Compared to other midsize sedans, the Camry has a generous amount of rear headroom and legroom, but that seems to come at the expense of front headroom and legroom, which are below average. That wasn’t too much of an issue for us, however, as the front seats offered enough adjustability to find a suitable position. The seats themselves were also comfortable and supportive, and outward visibility was excellent.

At 15.1 cubic feet, cargo space is about average for a midsize sedan, but far behind the 16.7 cubic feet of the Honda Accord. In-cabin storage space was fairly limited, but that’s typical of a sedan. The cupholders and door bottle holders were on the small side, and items tended to get stuck in the crevices of the door storage bins.

Helpfully, Toyota included analog controls for important functions, so drivers don’t have to rely on the touchscreen. The large knobs for audio volume and tuning (with rubberized grips), and shortcut buttons for touchscreen menus improved ease of use, but the locations of these controls could be improved. The angle and size of the center stack meant some controls—such as the audio tuning knob—were a long reach from the driver’s seat. Dual-zone automatic climate control is available on higher trim levels. 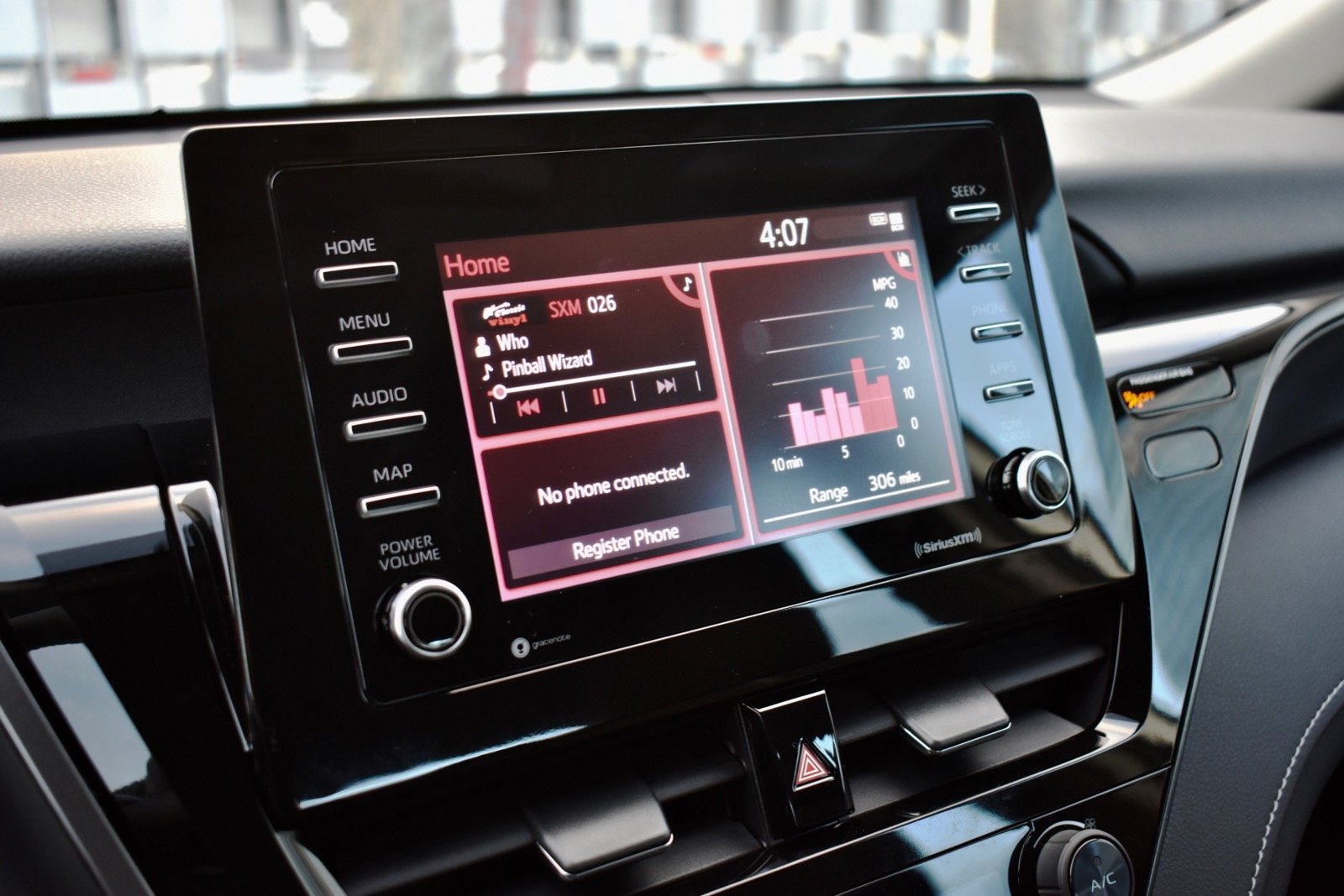 A single USB media port and two USB charge ports are both standard, along with a 12-volt outlet (all are located in the cubby hole ahead of the shifter). You don’t get any more places to plug in on higher trim levels.

As with other recent Toyota models, the touchscreen’s menus were easy to navigate, but the graphics were somewhat plain. Toyota’s infotainment system is very functional; it’s just not a standout feature. 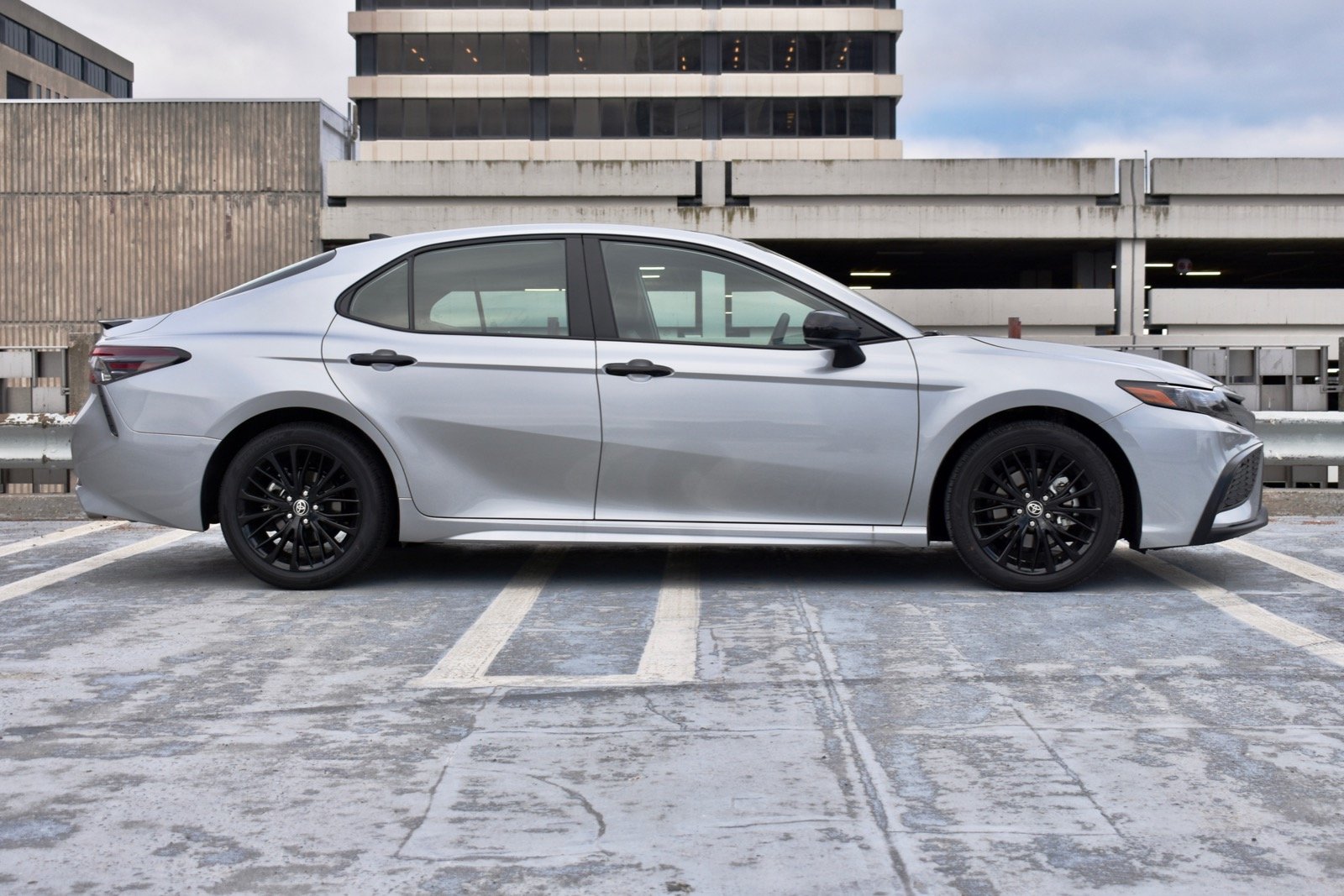 For the 2021 model year, the Camry gets the new TSS 2.5+ package of safety features as standard equipment. The list of standard features—including adaptive cruise control, automatic emergency braking, forward-collision warning (with pedestrian detection), lane-departure warning, automatic high beams, and traffic-sign recognition—is largely unchanged, but many of the safety systems get enhanced capabilities, according to Toyota.

For example, when the adaptive cruise control is active, the car will automatically provide a burst of acceleration when the driver engages the turn signal and begins to steer, to assist with lane changes. Forward-collision warning can now detect not only the vehicle ahead, but also a preceding cyclist (in daytime only), as well as detect oncoming vehicles or pedestrians while making a left-hand turn, according to Toyota.

Also new for the 2021 model year is Toyota’s Rear Seat Reminder. Standard on all trim levels, it’s designed to prevent children or pets from being left unattended in the back seats, using beeps and a message on the dashboard. Similar features have been available on Chevrolet and Nissan vehicles for a few years and, as with those versions, it’s unclear if a person too distracted to remember that the back seat is occupied will be reminded this way. That’s especially true in the Camry, where the Rear Seat Reminder beep could easily get lost amid the various other audio warnings issuing from the speakers.

Blind-spot monitoring and rear cross-traffic alert are also available as standalone options. They're standard on the XLE and XSE trim levels, and optional on the LE and SE grades. 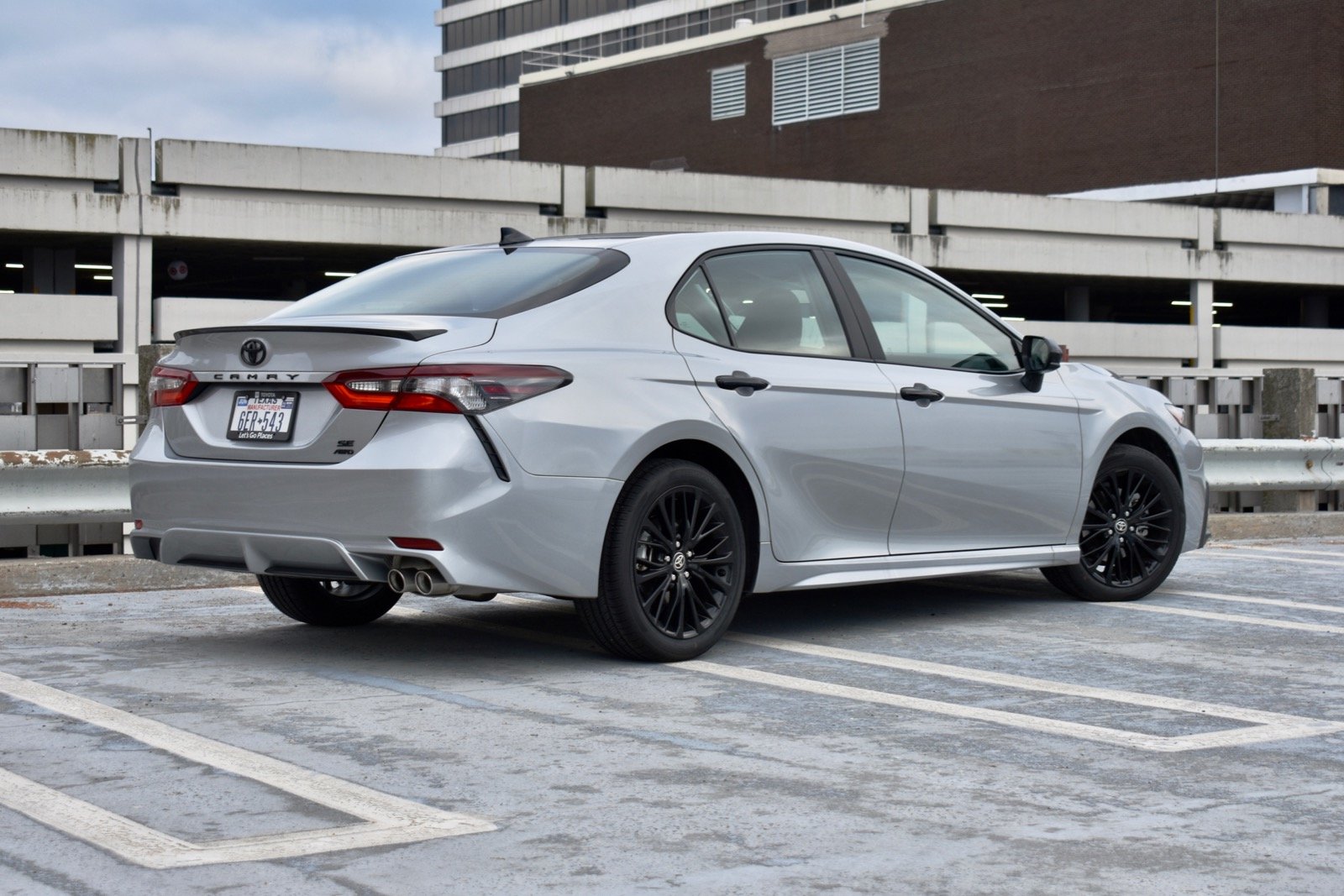 Similarly, the V6 engine is rated at 26 mpg combined (22 mpg city, 33 mpg highway), but only in XLE trim; the XSE and TRD models get slightly lower mpg in at least one category. Overall, gas-mileage figures are competitive but not class-leading. However, Toyota also offers the Camry Hybrid, with a maximum 52 mpg combined—the same as a base Prius.

Toyota offers a three-year, 36,000-mile, basic warranty and a five-year, 60,000-mile, powertrain warranty. Those are average terms for this segment, although the Hyundai Sonata and Kia K5 get a five-year, 60,000-mile limited warranty and a 10-year, 100,000-mile, powertrain warranty. Toyota retains an excellent reputation for reliability, which has traditionally been one of the most attractive things about the Camry.

Pricing starts at $25,965 for a base four-cylinder FWD LE model, while the range-topping XSE V6 has a $36,540 starting MSRP (all prices include a mandatory $995 destination charge). Our AWD SE Nightshade Edition tester had a $29,580 base price. Those prices are about average for a midsize sedan these days, but the Camry is significantly undercut by the Hyundai, Sonata, and Subaru Legacy—the latter offering standard AWD.

Where it was previously a boring appliance that sold mostly on a good reputation for reliability, the Camry is now a well-rounded product. Toyota’s midsize sedan remains competitive on interior space, fuel efficiency, and standard driver aids, but now adds a great driving experience to its resume—even with the base four-cylinder engine. The availability of AWD should also help retain some customers who might otherwise defect to SUVs.

Toyota rested on its laurels for a long time, knowing buyers would habitually buy its cars on name recognition alone. That’s no longer the case. The 2021 Camry is a good car that legitimately deserves its loyal following.

Guru3M1FH 2021 LE needs a little more under the hood

Have you driven a 2021 Toyota Camry?
Rank This Car

Enter your zip to see incentives for a new Camry in your area.

Can u put a 2011 toyota camry front driver's side door on a 2021 model?? Need info asap as someone parked their car behind my driveway and I backed out into it

After engine is warm

WHERE IS THE FUEL PUMP RELAY LOCATED