Looking for a New Subaru Forester in your area?

Mostly unchanged for 2021, the Forester remains a solid choice. 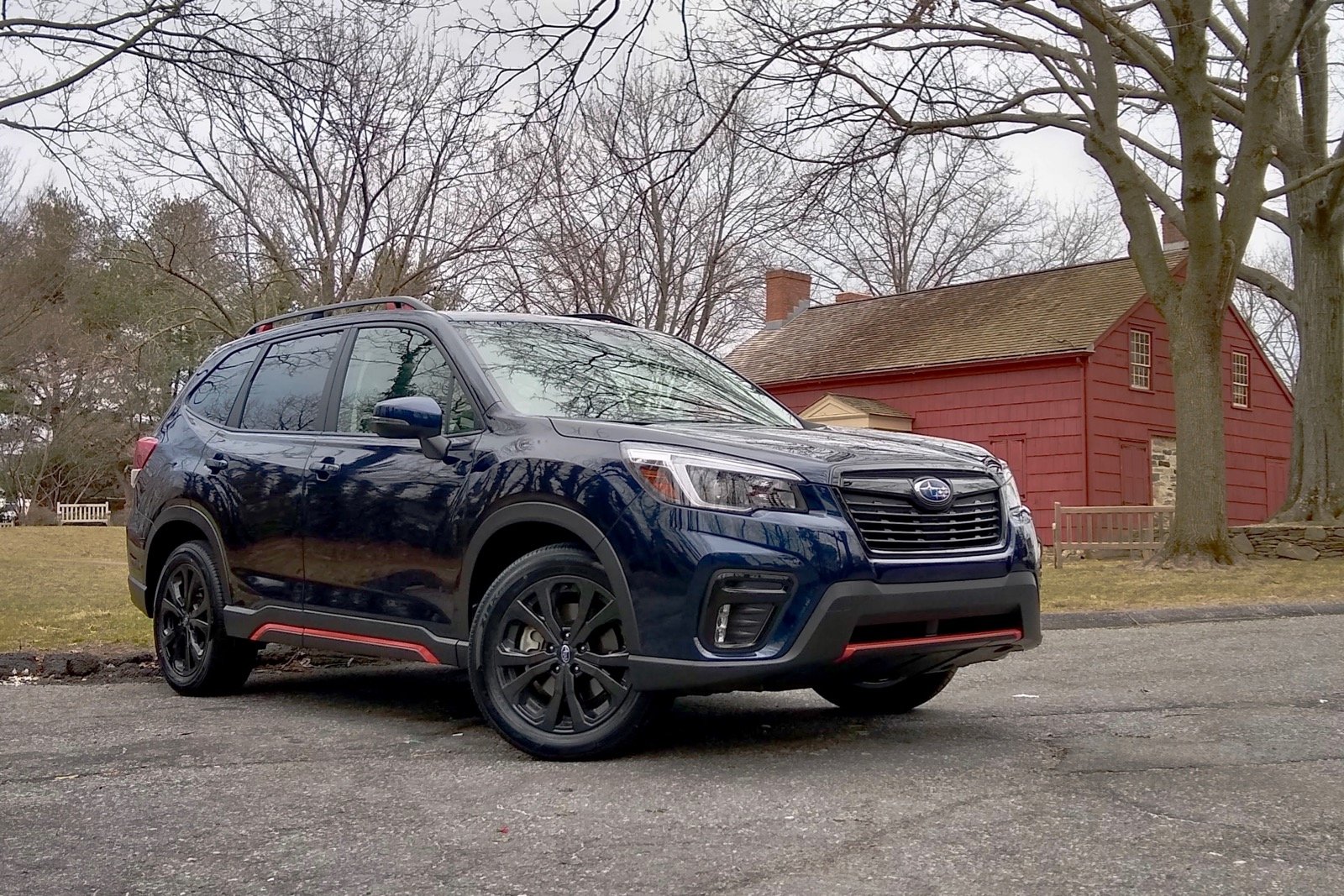 The Subaru Forester was one of the original compact crossover SUVs. Along with the Ford Escape, Honda CR-V, and Toyota RAV4, it helped introduce a vehicular genre that is now displacing traditional sedans from American driveways. That means the Forester has more competition than ever.

What was once a small market segment has swelled with the addition of compact SUVs like the Hyundai Tucson, Kia Sportage, Mazda CX-5, Nissan Rogue, Volkswagen Tiguan, and the modern version of the Jeep Cherokee.

To keep pace with the competition, the Forester has packed on technology—and pounds. While the first-generation Forester (affectionately nicknamed “toaster” by fans because of its boxy shape) was genuinely compact, the current version has the footprint of a midsize SUV from two decades ago. This version was introduced for the 2019 model year, so it doesn’t change much for 2021. The only news is the addition of three standard safety features—steering-responsive LED headlights, automatic high beams, and a rear seatbelt reminder—standard fog lights and keyless access with push-button start for the Premium trim level, and additional equipment reshuffling on other trim levels. 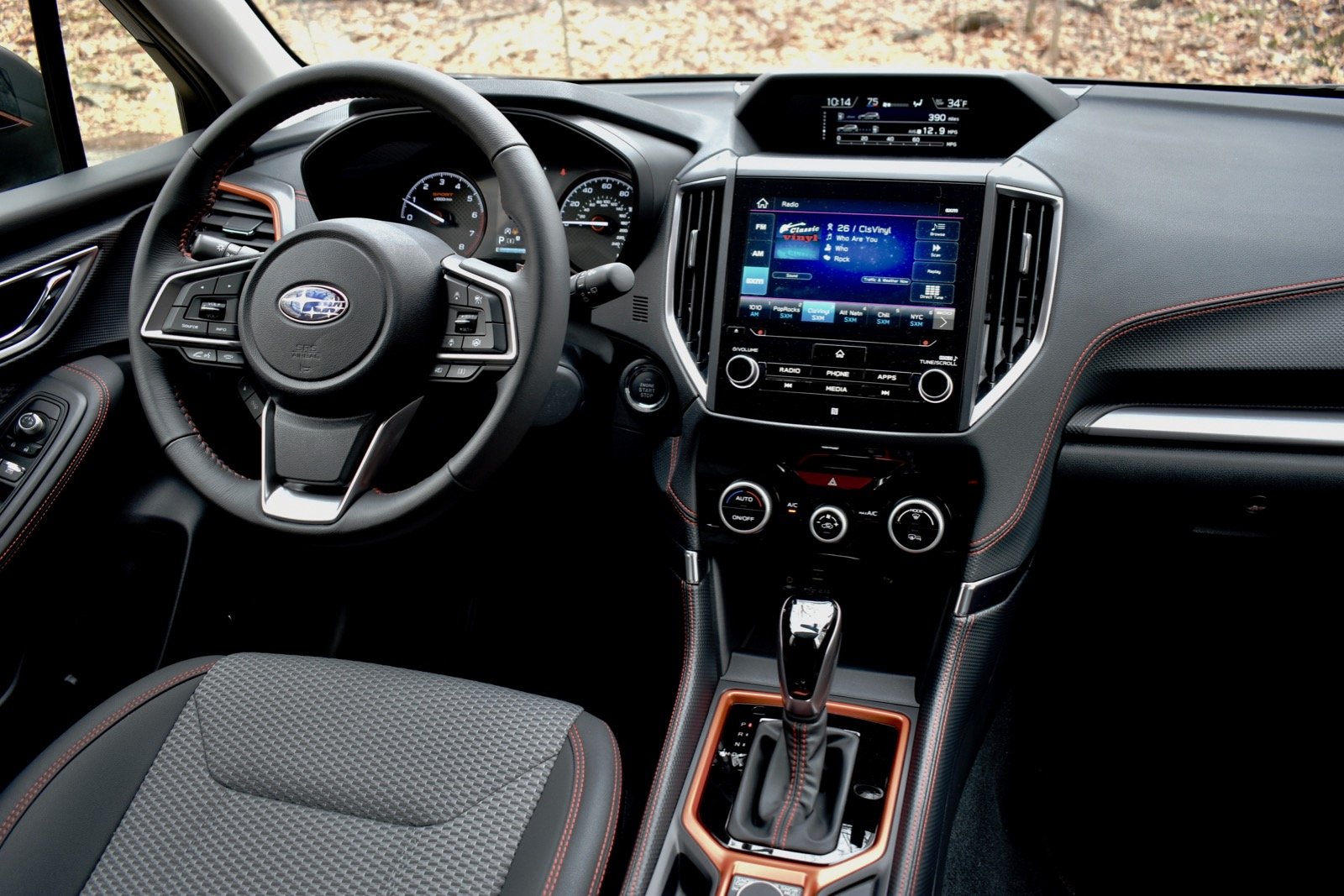 While the Forester was redesigned for the 2019 model year, the styling looks a lot older. That’s because it largely carried over from the previous-generation Forester. The biggest difference is actually the taillights, which have a distinctive cross shape on the current, fifth-generation Forester.

This was likely a case of Subaru not trying to fix something that wasn’t broken. With its boxy, upright shape, the Forester has exactly the kind of styling many SUV shoppers want. While the Base trim level looks a bit plain with its 17-inch steel wheels (17-inch alloy wheels are also available), the Forester also has a clean and unpretentious look compared to many other compact crossovers, in our opinion.

Forester Sport models like our test car get orange striping around the lower edges of the body and roof rails, plus a rear spoiler and black 18-inch alloy wheels. Those relatively small changes make a surprisingly big difference, especially if you pick a complementary paint color (our test car’s Dark Blue Pearl provided a nice contrast).

Under the sheet metal and orange striping, the Forester rides on the same Subaru Global Platform as most of the automaker’s other models, including the Impreza, Crosstrek, Legacy, and Outback, as well as the larger Ascent crossover. While Subaru markets the Forester as a rugged SUV, it’s shared underpinnings with sedans, hatchbacks, and wagons since the beginning, so this isn’t really a change in formula.

Like most other Subaru models, the Forester’s interior is a no-nonsense mix of materials that don’t look very pretty but are likely to stand up to years of abuse from the school runs and kayaking trips you see in the automaker’s ads. As with the exterior, the Sport trim level adds a splash of orange to the interior, in the form of both colored trim and cross-stitching.

Base, Premium, and Sport models get cloth upholstery, while the Limited and Touring get leather upholstery. An All-Weather Package (standard on Premium and higher trim levels) adds heated front seats, along with heated exterior mirrors and a windshield de-icer. 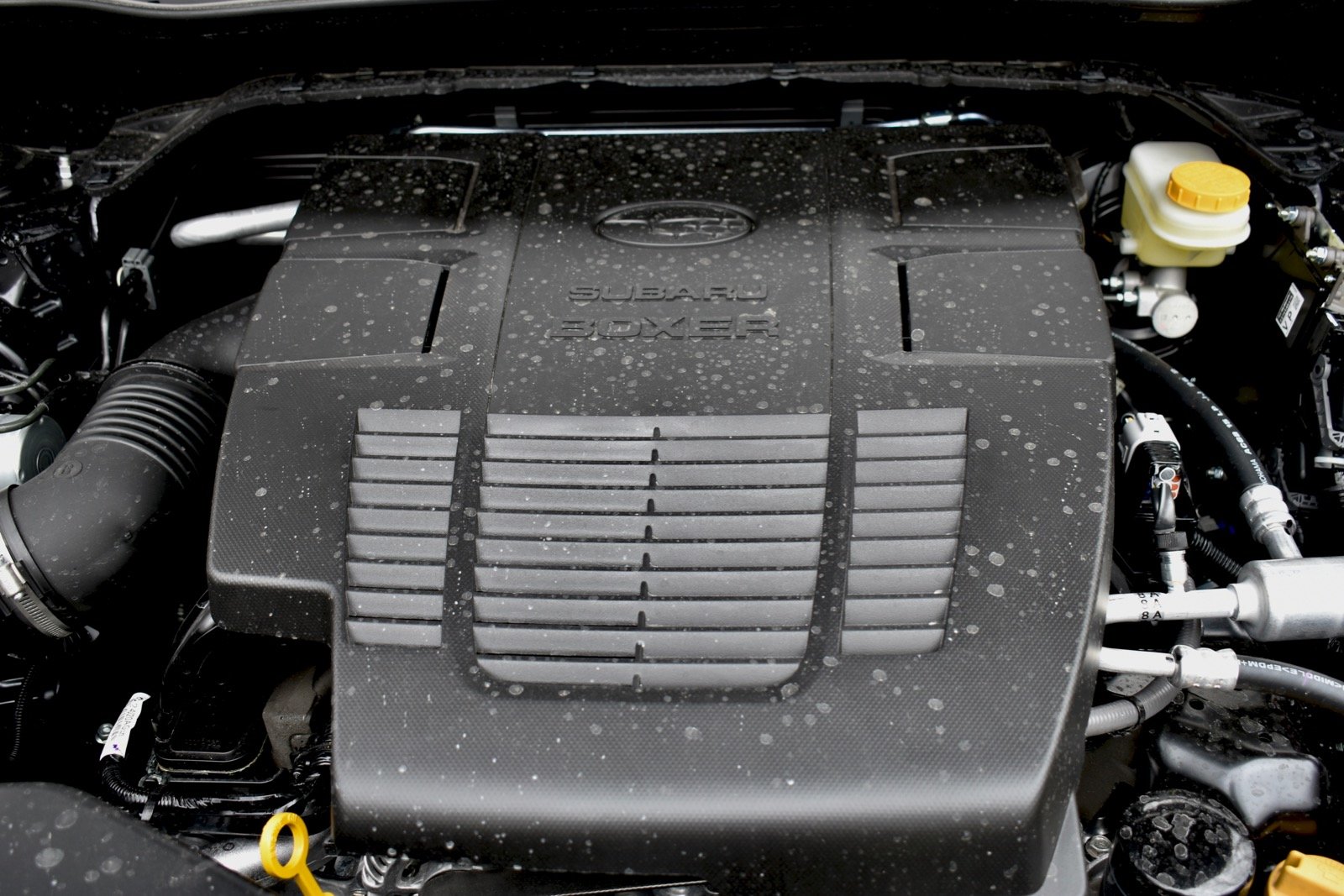 The 2021 Forester is available with only one powertrain: a 2.5-liter four-cylinder engine that produces 182 horsepower and 176 pound-feet of torque, connected to a continuously variable automatic transmission (CVT), with a manual mode and paddle shifters on certain trim levels. Because this is Subaru, the engine has a boxer configuration, with a lower center of gravity than the inline-four engines used by most competitors. With this powertrain, Subaru quotes a 1,500-pound maximum towing capacity, and Trailer Stability Assist is standard.

Subaru no longer offers a turbocharged engine option in the Forester, but it might be a good idea to bring the turbo back. Power felt adequate in most situations, but the engine didn’t provide the thrust we would have liked when merging onto highways or overtaking. At highway speeds, we also noticed a lot of wind noise.

The Forester wasn’t designed to handle like a Subaru WRX, but the suspension tuning still underwhelmed. This SUV felt very softly sprung, which helped soak up bumps but resulted in poor body control. We experienced lots of body roll in corners, which isn’t surprising in a tall vehicle tuned for comfort rather than handling, but also lots of bounce in straight lines on uneven pavement. That means, while you don’t really feel the impact of bumps, the body is still moving around so much that the ride isn’t exactly comfortable.

AWD is a major part of Subaru’s identity, and the Forester is the only vehicle in its segment to get AWD as standard equipment. The drivetrain is also a bit more sophisticated than what you get in most competitors, thanks to a standard X-Mode that can tweak throttle response, the AWD system, transmission, and other vehicle parameters for different surfaces. Sport models get Dual X-Mode, with “Snow/Dirt” and “Snow/Mud” modes.

Forester Premium and higher trim levels also get standard hill-descent control, and all models have a respectable 8.7 inches of ground clearance, which should allow the Forester to handle mud and dirt better than the average compact crossover. However, for serious off-road capability, you’d be better off with the Jeep Cherokee Trailhawk, or the newly-launched Ford Bronco Sport. 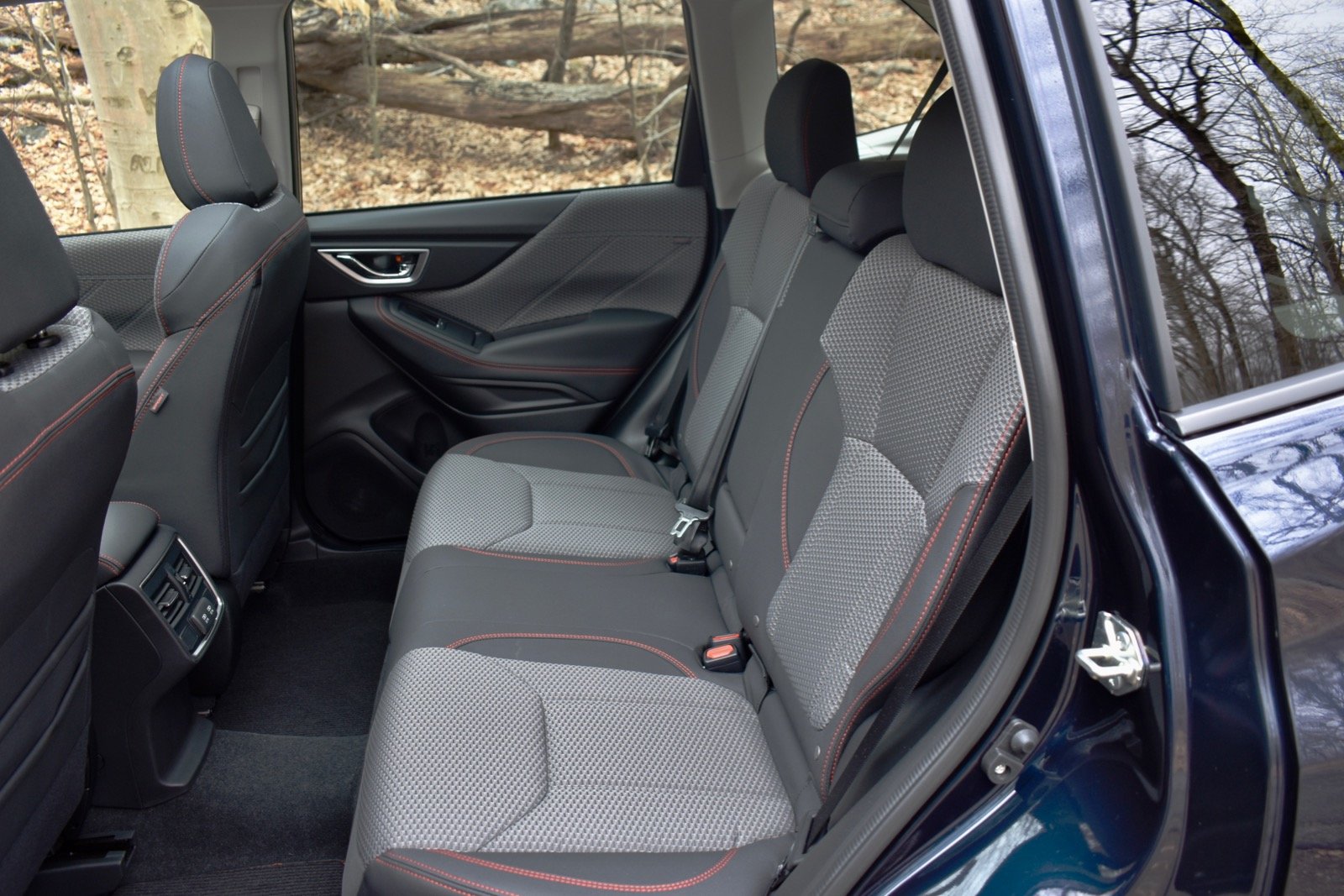 The five-seat Forester offers above-average headroom and legroom in both rows, likely a result of that tall, relatively flat roof. That roofline also leaves lots of room for glass, giving the Forester a roomy feeling and excellent outward visibility, but also letting in lots of sunlight that can quickly raise the ambient cabin temperature on sunny days.

The Forester may not have the epic 19 cupholders of its three-row Ascent sibling, but the cupholders you do get are decently sized, without getting in the way. The center console is also reasonably sized, but the phone-storage cubby was too small for an average-size phone, and Subaru doesn’t offer wireless charging. A power-adjustable driver’s seat isn’t standard, either; you’ll have to upgrade from the Base to the Premium trim for that.

We liked the large knobs for audio volume, tuning, and climate control, but the number of buttons and switches on the steering wheel caused a bit of confusion. 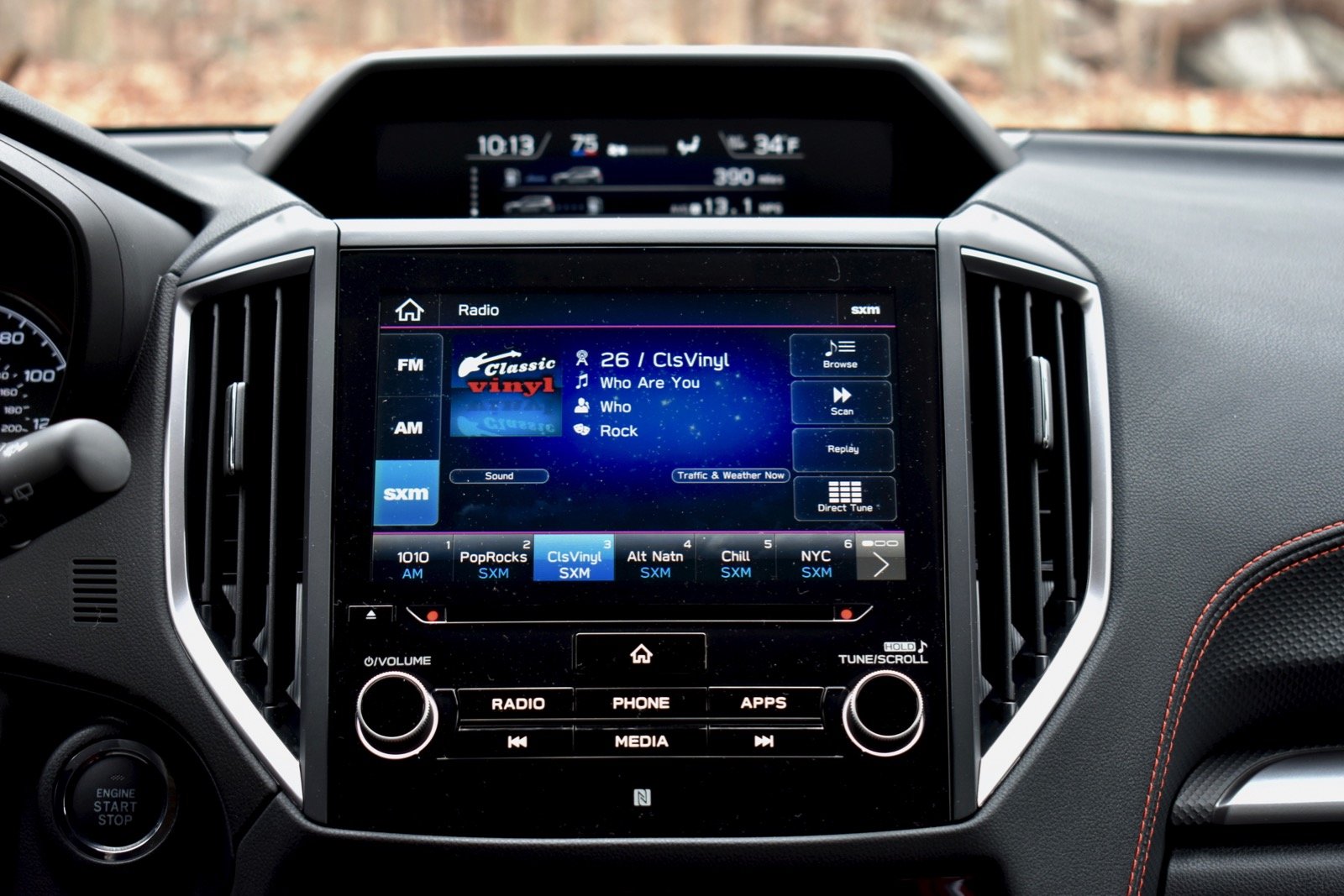 We found the Forester’s infotainment system easy to use, thanks to well-designed graphics and backup analog controls—including physical shortcut buttons for the home screen, phone, and radio. However, the screen was very slow to boot up when starting the car.

In addition to the main touchscreen, Subaru includes a small secondary screen in the center of the dashboard, as well as a small screen in the instrument cluster between the analog speedometer and tachometer. Both displays show secondary information like fuel economy, tire pressure, and an inclinometer. The setup seemed a bit overly complex, since much of the same information can be displayed on both screens, and it seems unlikely that drivers will need to have so much information on display at once. 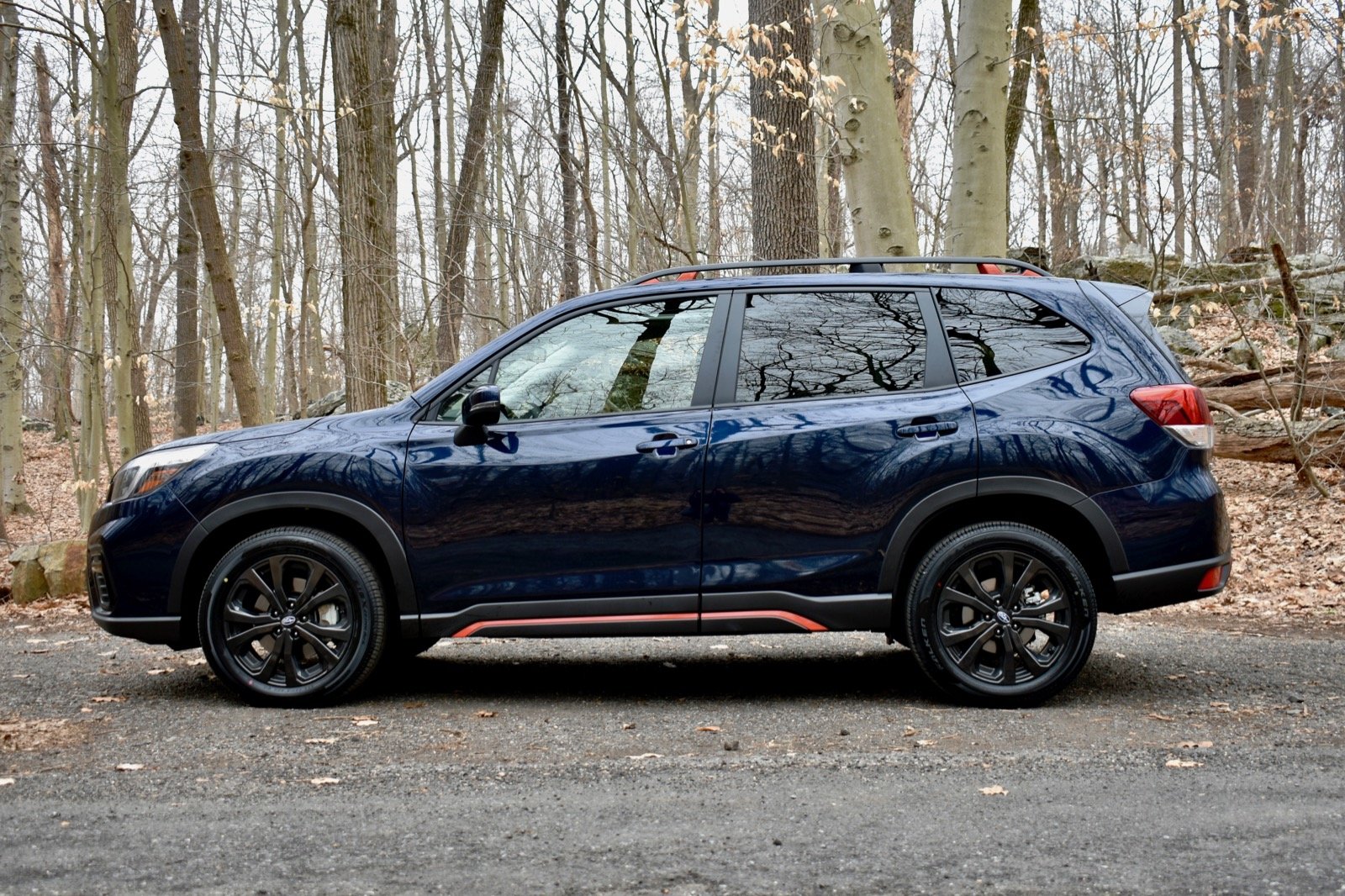 Safety is a Subaru strong suit, as demonstrated by the Forester’s crash-test results. The 2021 Forester received the highest “Top Safety Pick+” award from the Insurance Institute for Highway Safety (IIHS), with top “Good” ratings in all crash tests, the top “Superior” rating for front-crash prevention tech, and a “Good” rating for headlights.

Like most other Subaru models, the Forester comes standard with EyeSight, a group of driver-assist features enabled by a pair of cameras mounted near the rearview mirror. The camera-based system is cheaper and easier to package than rival systems, which typically rely on grille-mounted radar units. That allowed Subaru to roll out EyeSight more quickly across its lineup, although competitors are catching up with standard safety features.

However, Subaru remains the only mainstream brand to offer a driver-monitoring system. Dubbed DriverFocus, it uses a camera to check for signs of distraction, ensuring drivers aren’t misusing the EyeSight tech. EyeSight and comparable systems don’t allow cars to drive themselves and still require an attentive driver.

On the highway, EyeSight’s adaptive cruise control and lane-centering functions performed adequately, but the latter’s steering inputs felt jerky, lacking the smoothness of a competent human driver. While lead-vehicle start alert will help you avoid holding people up at traffic lights, we noticed that cars rolling at red lights could trigger false alarms. 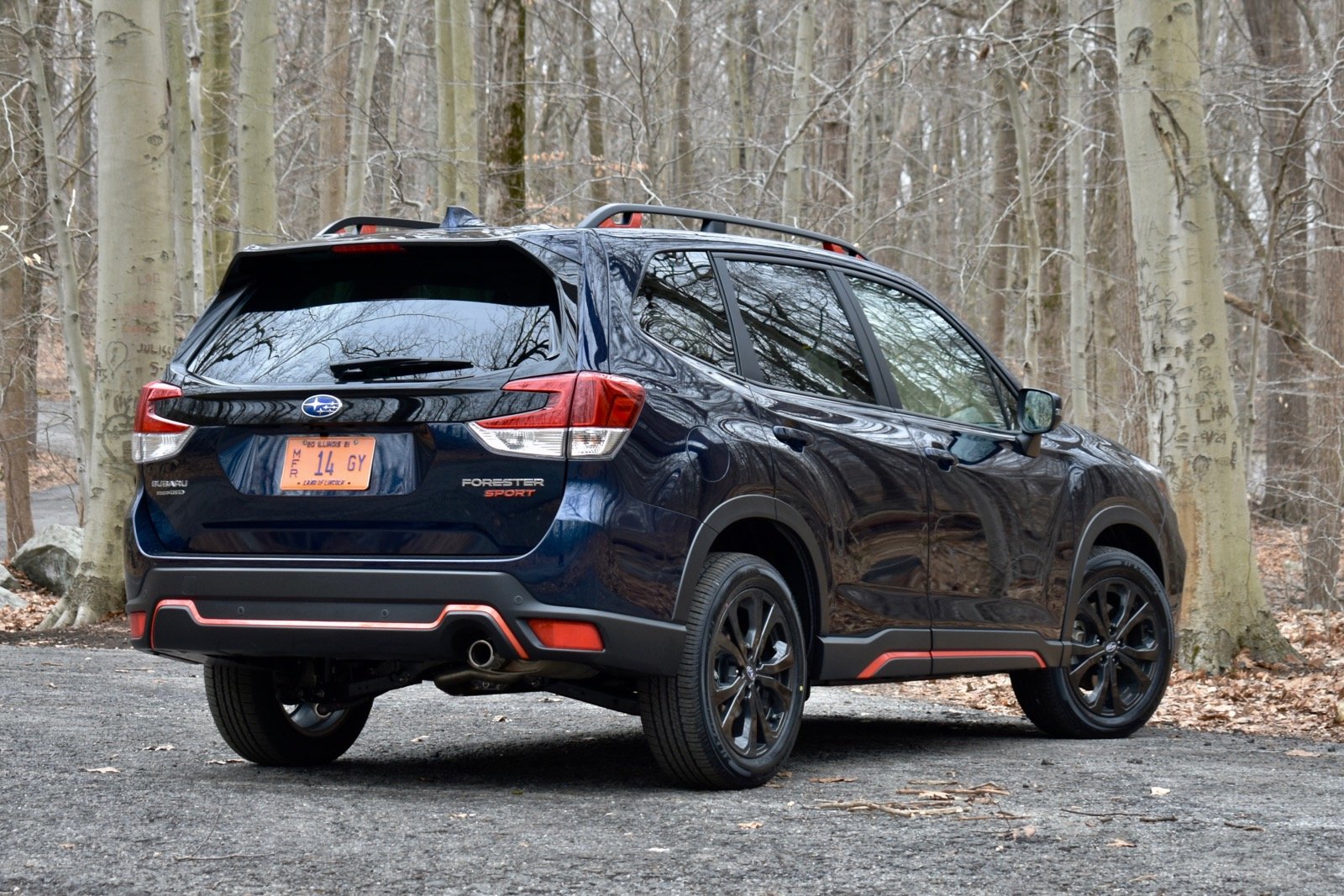 The 2021 Subaru Forester gets an EPA-rated 29 mpg combined (26 mpg city, 33 mpg highway). We managed 26.8 mpg over a week of driving in mixed conditions, according to the car’s dashboard displays. Those fuel-economy figures are pretty good for a compact SUV, but some rivals also offer more efficient hybrid and plug-in hybrid powertrains. Subaru does have a Toyota-derived plug-in hybrid powertrain in its lineup, but only on the smaller Crosstrek.

Pricing for the 2021 Subaru Forester starts at $25,845 for the Base trim level, while the range-topping Forester Touring starts at $35,945 (all prices include a mandatory $1,050 destination charge). Our Forester Sport test car had a base price of $29,395, but was also equipped with an option package (including reverse automatic braking, 8-inch touchscreen, a power liftgate, and Harman Kardon audio system), giving it a $32,090 MSRP.

Pricing is competitive with other compact crossovers, especially considering that Subaru makes AWD standard, where rivals like Honda and Toyota only offer front-wheel drive (FWD) on base models. Add to that the Forester’s impressive passenger and cargo space, and its functional interior and tech, and you’ve got a very practical, if somewhat vanilla, small crossover.

What's your take on the 2021 Subaru Forester?

Have you driven a 2021 Subaru Forester?
Rank This Car

Enter your zip to see incentives for a new Forester in your area.

Here is a recording of the sound: https://streamable.com/tp3muh I bought this car a month ago. It has 480 miles on it. It has an auto shut off feature when I come to long stops. Since I got the ca...

drywit asked a 2021 Subaru Forester 2.5i Wagon AWD Maintenance & Repair question about a month ago

Are the 2021 Subaru Foresters less prone to battery discharge problems than previous models?

Here is a recording of the sound: https://streamable.com/tp3muh I bought this car a month ago. It has 480 miles on it. It has an auto shut off feature when I come to long stops. Since I got the ca...

Does The 2021 Subaru Forester Have An Inner Fuel Flap?

Left the gas cap AND gas door open while gong through car wash! Is there an inner fuel 'flap' that keeps the water out, or should I take car to dealer for service? It's running fine, only 1,000 mil...

I have a 2021 Forester Sport I'm going to be camping in. How can I lock the doors at night while I'm sleeping in it? I'm assuming that having the key fob in the car with me will keep the doors unloc...