Looking for a New Subaru Crosstrek in your area?

The 2021 Subaru Crosstrek is a hatchback in hiking boots. 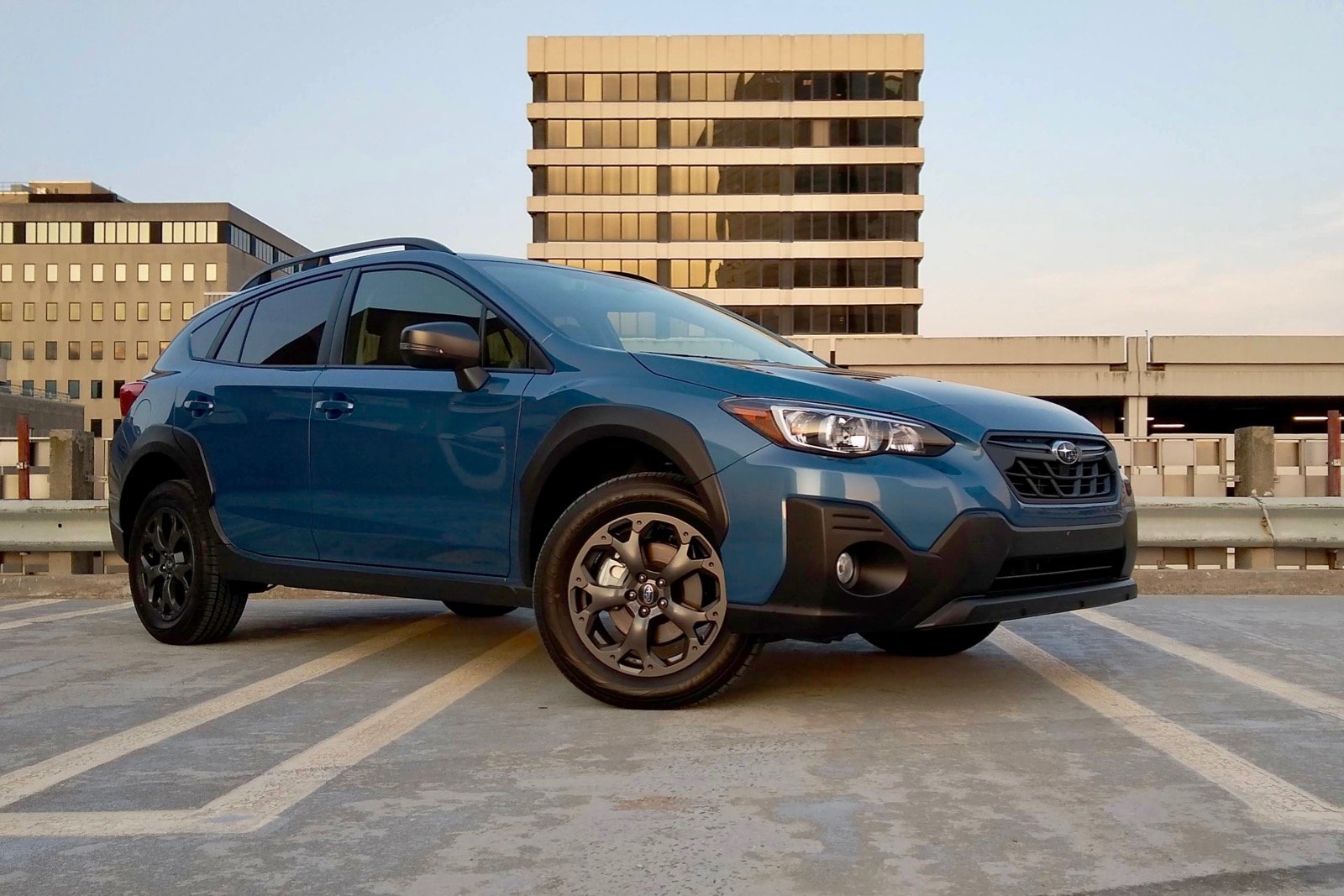 The 2021 Subaru Crosstrek is the same basic vehicle as before, but gets a handful of notable updates. A new Sport trim level joins the previous base, Premium, and Limited trim levels in a lineup, and a 2.5-liter engine is now available alongside the previous 2.0-liter engine. The 2021 Crosstrek also gets an upgraded version of Subaru’s EyeSight driver-assistance system. 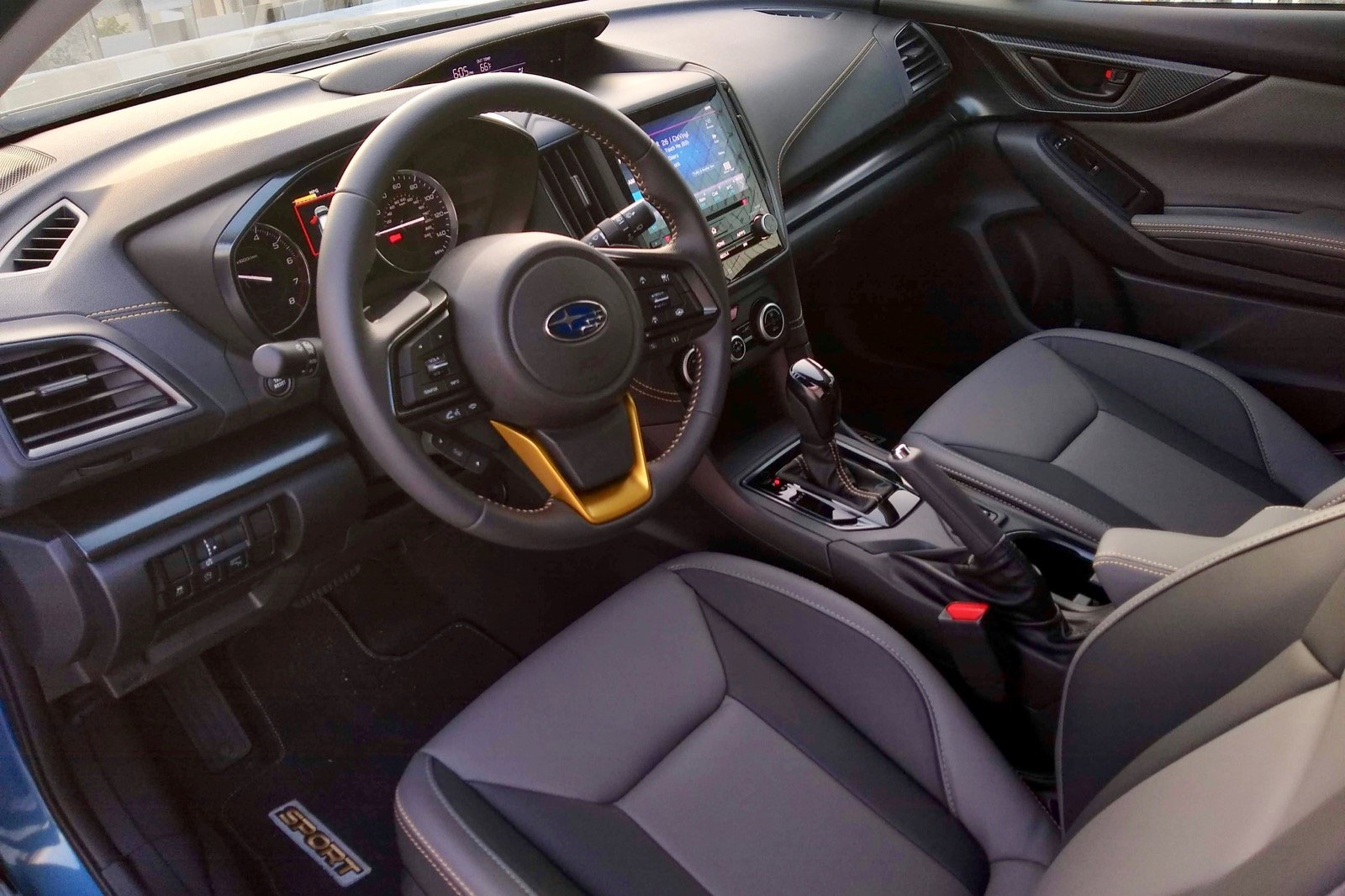 The Crosstrek embodies the adage “if you can’t beat ‘em, join ‘em.” Car shoppers are flocking to crossovers for their rugged looks, available all-wheel drive (AWD), and tall driving positions, so Subaru decided to imbue its Impreza hatchback with those same characteristics. It’s the same strategy that has allowed the larger Outback to outlast nearly every other station wagon in the United States.

Like most Subaru models, the Impreza hatch already comes standard with AWD. Visually, the Crosstrek is differentiated from an Impreza by black body cladding model-specific 17-inch wheels and a taller ride height that affords 8.7 inches of ground clearance, according to Subaru. That’s a pretty good number for dedicated SUVs, let alone an ordinary car.

The changes have a big impact, allowing the Crosstrek to do a reasonably good impression of an SUV, and giving it more character than the base Impreza hatch. It also helps that Subaru typically offers more vibrant colors on the Crosstrek, including Plasma Yellow Pearl for the 2021 model year.

Under the plastic body cladding, the Crosstrek rides on the same Subaru Global Platform as most of the automaker’s other models, including the Legacy/Outback, Ascent, and Forester. It’s proven to be a fairly good design across the board, with all models exhibiting a greater level of polish and refinement than their predecessors.

The interior is virtually unchanged from the Impreza hatchback. That means it’s functional but somewhat plain-looking. Bizarrely, Subaru decided to jazz up our Sport-trim-level test car with Plasma Yellow Pearl accents, which clashed with the Horizon Blue Pearl exterior. The simulated carbon-fiber trim pieces included on the Crosstrek Sport also looked cheap, but the model does get water-repellant StarTex upholstery, which should come in handy on trips to the beach. 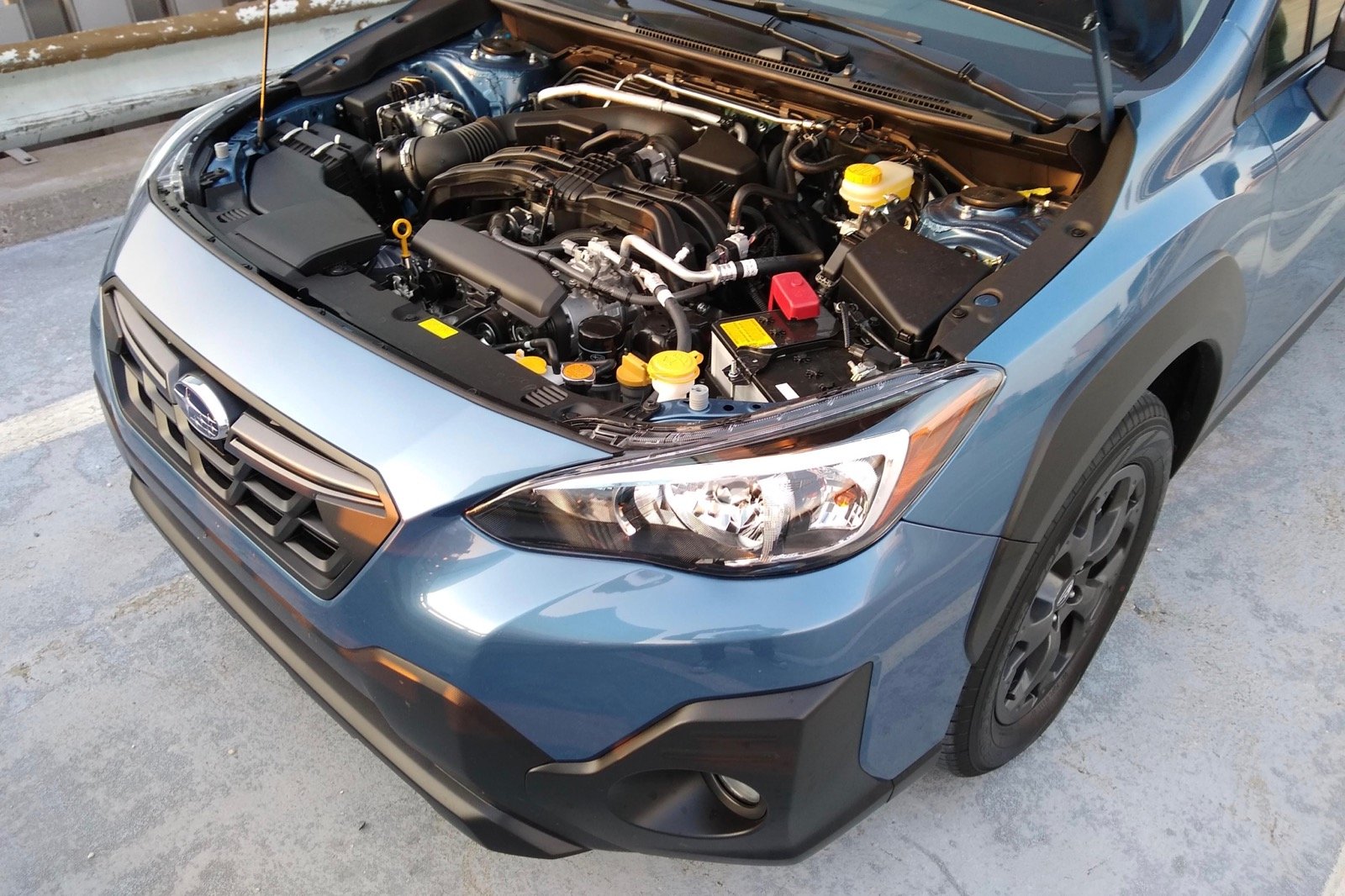 For 2021, the Crosstrek gets a second gasoline powertrain option. Standard on the Sport and Limited trim levels, the new 2.5-liter boxer-four engine makes 182 horsepower and 176 pound-feet of torque. The base and Premium trim levels continue with the previous 2.0-liter boxer-four, which produces 152 hp and 145 lb-ft of torque. Subaru has also offered a Crosstrek Hybrid plug-in hybrid since the 2019 model year, but hasn’t announced an updated 2021 model.

The boxer engine, with cylinders running parallel to the ground, is a Subaru trademark. It has a lower profile than the upright inline-four engines used in most other small cars, providing a lower center of gravity that can improve handling. Granted, raising the ride height to create an SUV-like stance likely negates some of that benefit.

A six-speed manual transmission is still standard on Base and Premium trim levels, but most buyers will likely upgrade to the optional continuously variable transmission (CVT). The Sport and Limited trim levels are CVT only, so you have to go automatic to get the bigger engine.

All trim levels get standard AWD—something that can’t be said of many of the small crossovers the Crosstrek competes with. The system includes torque vectoring, which can shunt power side to side to help turn the car into corners, and the X-Mode previously seen on the Ascent, Forester, and Outback. X-Mode is designed for loose surfaces, and it incorporates hill descent control. The new-for-2021 Sport trim level also gets Snow/Dirt and Deep Snow/Mud modes. These features don’t exactly make the Crosstrek super capable off-road, but they may come in handy during bad weather.

Despite the gestures at SUV ruggedness, most Crosstreks will probably spend their entire lives on the pavement, and this hatchback is fairly well suited to that as well. In corners, it has the predictable handling feel of the standard Impreza, although the higher center of gravity is noticeable in the form of increased body roll. This was at least balanced with a comfortable ride and a low level of wind noise—even at highway speeds.

Our Sport test car had the new 2.5-liter engine which, despite an additional 30 hp and 31 lb-ft of torque over the base engine, didn’t feel dramatically different. Acceleration is still adequate, but accompanied with plenty of droning from the CVT. 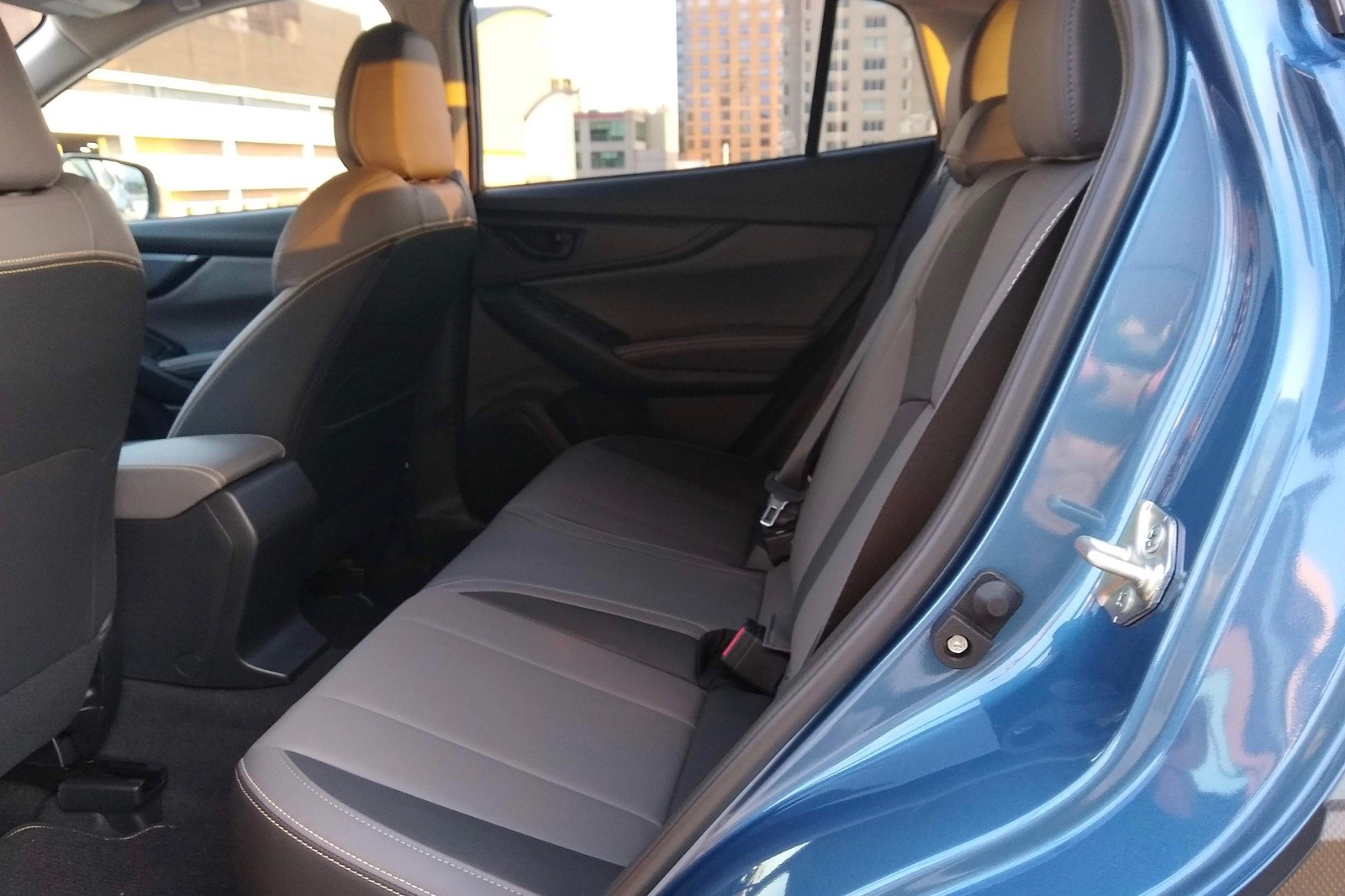 The Crosstrek offers the same front and rear legroom as the Impreza hatchback. Front headroom is the same as well, but Subaru lists the Crosstrek as having slightly more rear headroom than the Impreza. At 20.8 cubic feet with the rear seats in place, and 55.3 cubic feet with the rear seats folded (the rear bench seat has a 60/40 split fold), both models have the same amount of cargo space.

This also means the Crosstrek is competitive against other small crossovers on passenger space, but not cargo space. While the Subaru does offer more cargo space than the Hyundai Kona and Jeep Renegade, it’s behind the Honda HR-V, Kia Seltos, Mitsubishi Eclipse Cross, and Nissan Rogue Sport. It’s worth noting that, despite being marketed as SUVs, all of these vehicles are fairly stingy on passenger space and cargo space due to their compact footprints.

CVT-equipped Crosstrek models also get a rear-seat reminder intended to stop drivers from leaving children or pets unattended in the back seats. It sounds a chime and displays a message in the instrument cluster when the ignition is turned off. Subaru is not the first automaker to offer this feature, and it’s unclear how effective it is. If a person is already distracted enough to forget their child or pet, will they notice the alerts?

Up front, Subaru provided a handy cubby hole ahead of the shifter to place a phone—complete with USB port and auxiliary port. The maximum number of USB ports available is two, however, and they’re both located in this space. That’s not good for rear-seat passengers. Other storage space is minimal—another reminder that the Crosstrek is more compact car than crossover—but that at least includes decent-sized bottle holders in the doors.

While the driving position feels appreciably higher than an Impreza’s, the Crosstrek doesn’t allow you to tower over other vehicles like traditional crossovers or SUVs. However, outward visibility is good, thanks to a large amount of side glass that comes down fairly low for a modern vehicle, and that car-like front fascia and hood. 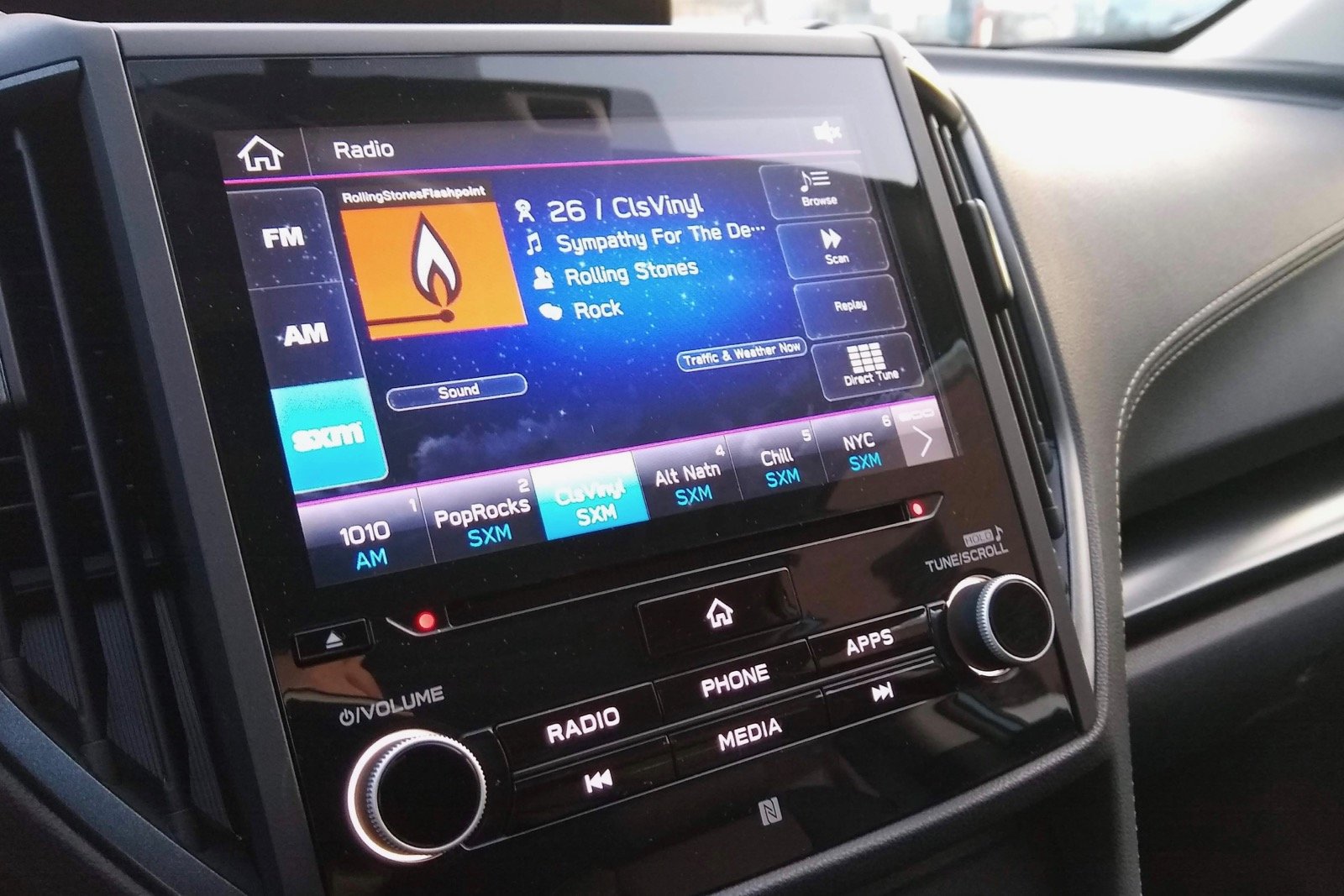 The Crosstrek uses Subaru’s Starlink infotainment system, with a standard 6.5-inch touchscreen, Apple CarPlay/Android Auto compatibility, and Bluetooth. Premium and Sport trim levels get a Multimedia Plus setup that adds WiFi, a SiriusXM satellite radio receiver and—for those who never left the 1990s behind—a single-disc DC player. An 8-inch touchscreen with navigation is standard on the top Limited trim level and optional on lower trim levels.

Subaru is unusual in displaying some information on a second screen above the main touchscreen. It seems a bit redundant, as much of the same information can be displayed in the instrument cluster as well.

Our test car had the 8-inch touchscreen, which was easy to navigate and responsive. Just as important as the screen itself, Subaru equipped the Crosstrek with large analog knobs and buttons for vital functions like audio volume and climate control. Chunky buttons on the steering wheel control EyeSight driver-assistance features, helping to ensure the driver doesn’t make mistakes. 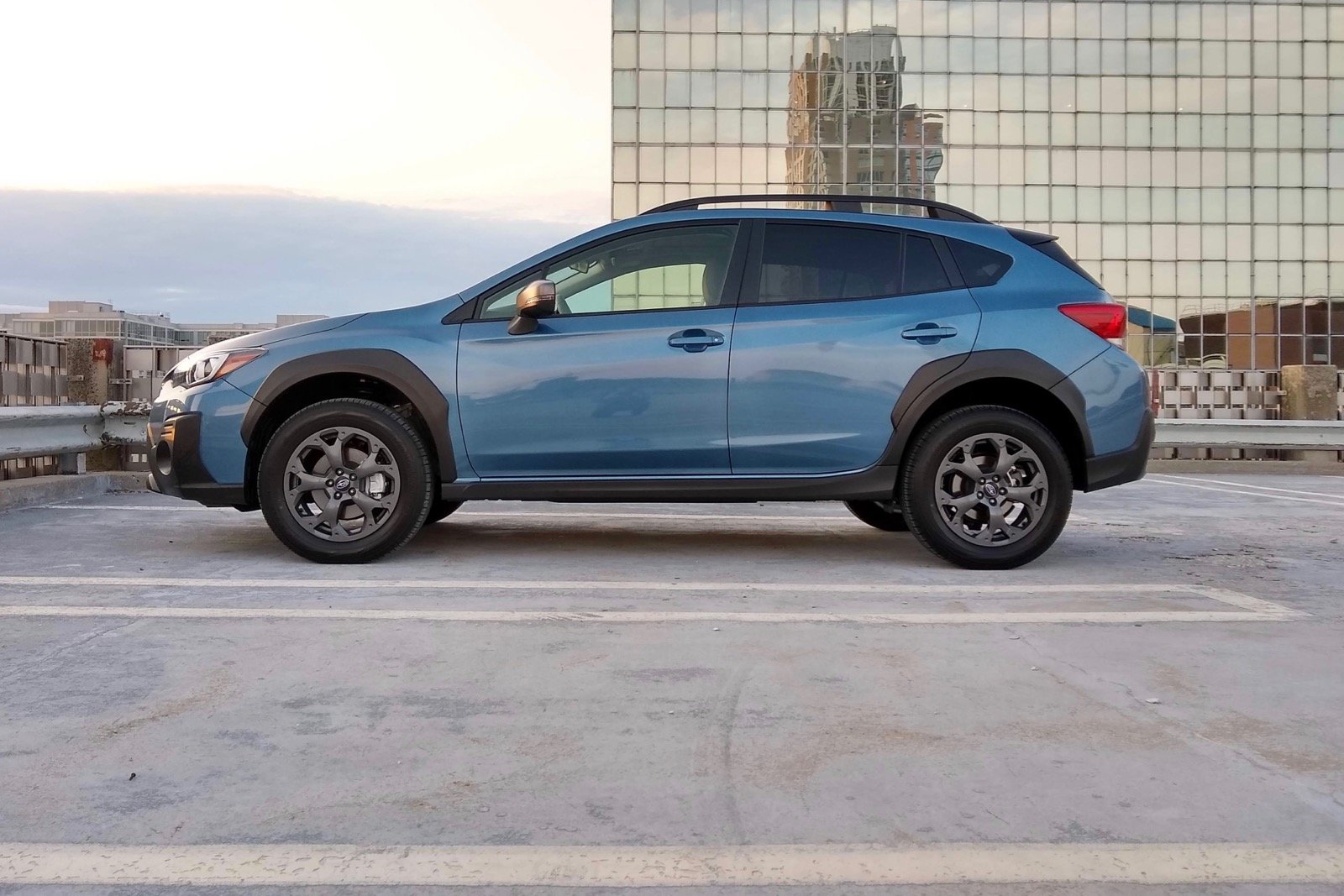 The 2021 Subaru Crosstrek received a five-star overall safety rating from the National Highway Traffic Safety Administration (NHTSA), with five stars in side crash tests and four stars in frontal and rollover crash tests.

The Insurance Institute for Highway Safety (IIHS) hasn’t tested the 2021 Crosstrek, but the virtually-identical 2020 model received the organization’s “Top Safety Pick” award, with the highest “good” rating in all crash tests, and for front-crash prevention tech. However, that rating only applies to models with some optional EyeSight driver-assist features, as well as optional Steering Responsive Headlights.

Subaru’s adaptive cruise control works just about as well as systems from other mainstream brands, which is to say, it’s not perfect. It was able to keep the car centered in its lane while driving in a straight line, but steering inputs weren’t sufficient for even gentle highway curves. However, the optional blind-spot monitoring system featured big warning lights on the exterior mirrors that were impossible to miss—making the feature more effective.

It’s also worth noting that the positioning of EyeSight’s cameras limits the system’s functionality. They get blocked by the windshield wipers and can wash out in direct sunlight as well (the car automatically disables driver aids if this occurs). The flipside is that the cameras are much better protected than the grille-mounted cameras and radar used by other automakers—potentially avoiding expensive repair bills after a fender bender. 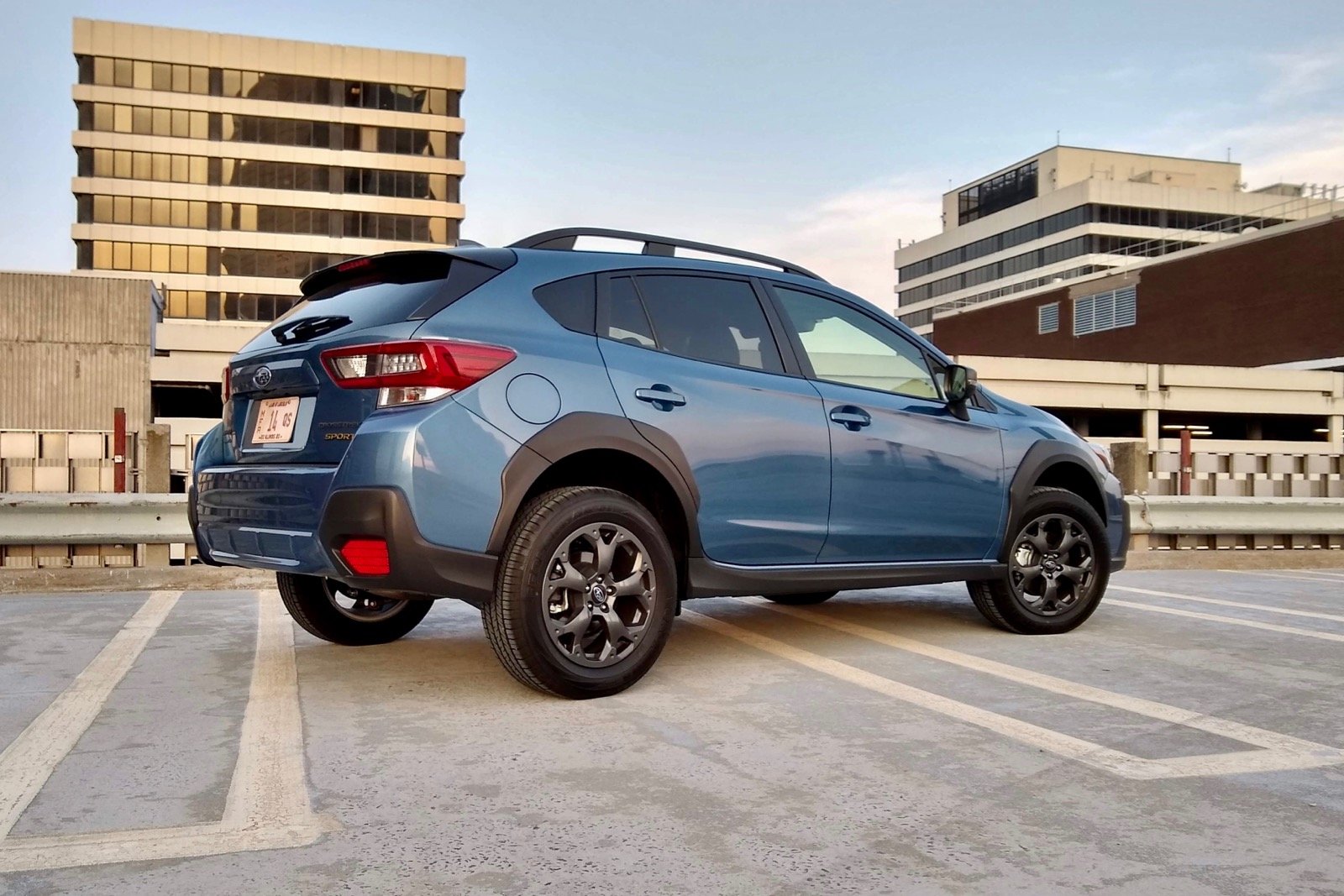 Gas-mileage ratings are fairly good, nosing ahead of small AWD crossovers like the Honda HR-V, Hyundai Kona, and Chevrolet Trailblazer. Note that Subaru also offered the Crosstrek Hybrid plug-in hybrid for the 2020 model year, but hasn’t announced a 2021 model. The 2020 Crosstrek Hybrid was rated at 35 mpg combined in hybrid mode, and 90 MPGe combined in electric mode, with 17 miles of electric range.

The Crosstrek’s size, AWD, and styling put it in the same arena as those crossovers, and so does its price. The 2021 Crosstrek starts at $23,295 for a base model with the manual transmission (all prices include a mandatory $1,050 destination charge). The range-topping Limited model starts at $31,440.

Our Sport test car had a base price of $26,495, but had the optional 8-inch touchscreen, blind-spot monitoring, rear cross-traffic alert, lane-change assist, and Horizon Blue Pearl paint. Along with the destination charge, that brought the as-tested price to $29,145.

This pricing makes the Crosstrek a fairly good value. It’s well equipped, with a much more sophisticated AWD system than most crossovers in this segment, and plenty of safety tech. Subaru also has a fairly good reputation for reliability, so it’s likely the Crosstrek will make a good long-term investment.

However, if a small, AWD vehicle is what you want, you might also want to consider an Impreza hatchback. It doesn’t have the Crosstrek’s SUV-like looks, but it does have the same amount of cargo space and similar features—all at a base price of a few thousand dollars lower than the Crosstrek’s.

What's your take on the 2021 Subaru Crosstrek?

Have you driven a 2021 Subaru Crosstrek?
Rank This Car

Enter your zip to see incentives for a new Crosstrek in your area.

Is it redundant to use the android auto app if I already have a base Starlink subscription?