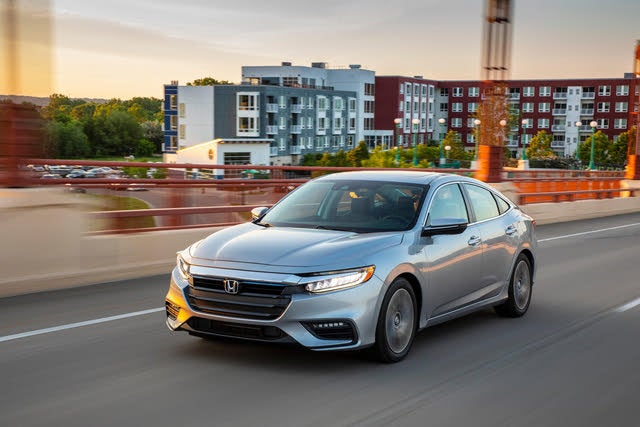 Looking for a New Honda Insight in your area?

Added safety comes to Honda’s little hybrid for 2021, as blind-spot monitoring with rear cross-traffic alert finally becomes standard on EX and Touring trims. That’s a big change, as these very popular features weren’t previously available, even as options. Because of this, the other change for 2021 is likely to be overshadowed, but pay attention because Radiant Red Metallic paint is also debuting as a new option.

While the Insight never lacked for safety—the “Honda Sensing” suite of safety features is standard throughout the lineup—the lack of a nearly ubiquitous feature like blind-spot monitoring was a definite weak point in an otherwise very solid offering. After all, the Insight boasts being the most efficient sedan around town on the market, offering up to 52 mpg combined and 55 mpg around the city. Those are impressive numbers, even for a hybrid, and the only vehicle that can currently compete is the Toyota Corolla Hybrid, which also manages 52 mpg, but instead prefers to concentrate on highway efficiency rather than city efficiency. If you want better numbers than that, you’re going to have to find a plug-in.

And how the Insight achieves those numbers is no secret. Honda first experimented with hybrid tech with the first generation Insight back in 1999. Since then several versions of the car have come and gone, but they’ve all had the same fuel-efficient focus. Today, the Insight is powered by a 1.5-liter Atkinson-cycle engine paired with an electric motor powered by a lithium-ion battery pack. With this setup, power is primarily delivered via that electric motor to the front wheels, and the gasoline engine works largely as a generator to power the battery packs. And while the combined 151 equivalent horsepower doesn’t sound like much, 60 mph will still come in around 7.7 seconds, which is fast enough to at least keep pace with most compact cars. However, if you push the car that hard, the engine will kick in to supplement the power, and when the 1.5-liter is strained, it doesn’t exactly sound good.

Thankfully, the Insight is well insulated, so the noise doesn’t intrude too much. And in normal use, it’s a very quiet and composed ride. Most buyers will look beyond the base LX trim, as it offers a different infotainment system that doesn’t handle smartphone integration and has a smaller, 7-inch touchscreen display. That said, push-button start, a tilt-and-telescoping steering wheel, and LED lights throughout are nice features to be found at this base level. And with standard Honda Sensing, you won’t be left in the lurch when it comes to safety, either.

Moving up to the EX will get you an upgraded infotainment system and an 8-inch screen with the very desirable option of utilizing Android Auto and Apple CarPlay, and that alone will be enough for some people to spend a little extra. The fact that you also get remote engine start, an upgraded stereo with Sirius and HD radio, and two 2.5-amp USB ports only sweetens the deal, not to mention the extra safety this year.

The Touring adds a lot and takes away a little at the same time. You’ll get power heated leather seats, navigation, dual-zone climate controls, LED foglights and turn indicators, an even more powerful stereo, and a power moonroof, but for all that you’ll lose a couple of combined mpgs, as well as a small amount of trunk space, dropping from 15.1 cubic-feet to 14.7 thanks to a subwoofer in the trunk.

Have you driven a 2021 Honda Insight?
Rank This Car

Enter your zip to see incentives for a new Insight in your area.