The Canyon receives a freshened face and new AT4 off-road-inspired trim, but it’s largely the same truck as before. 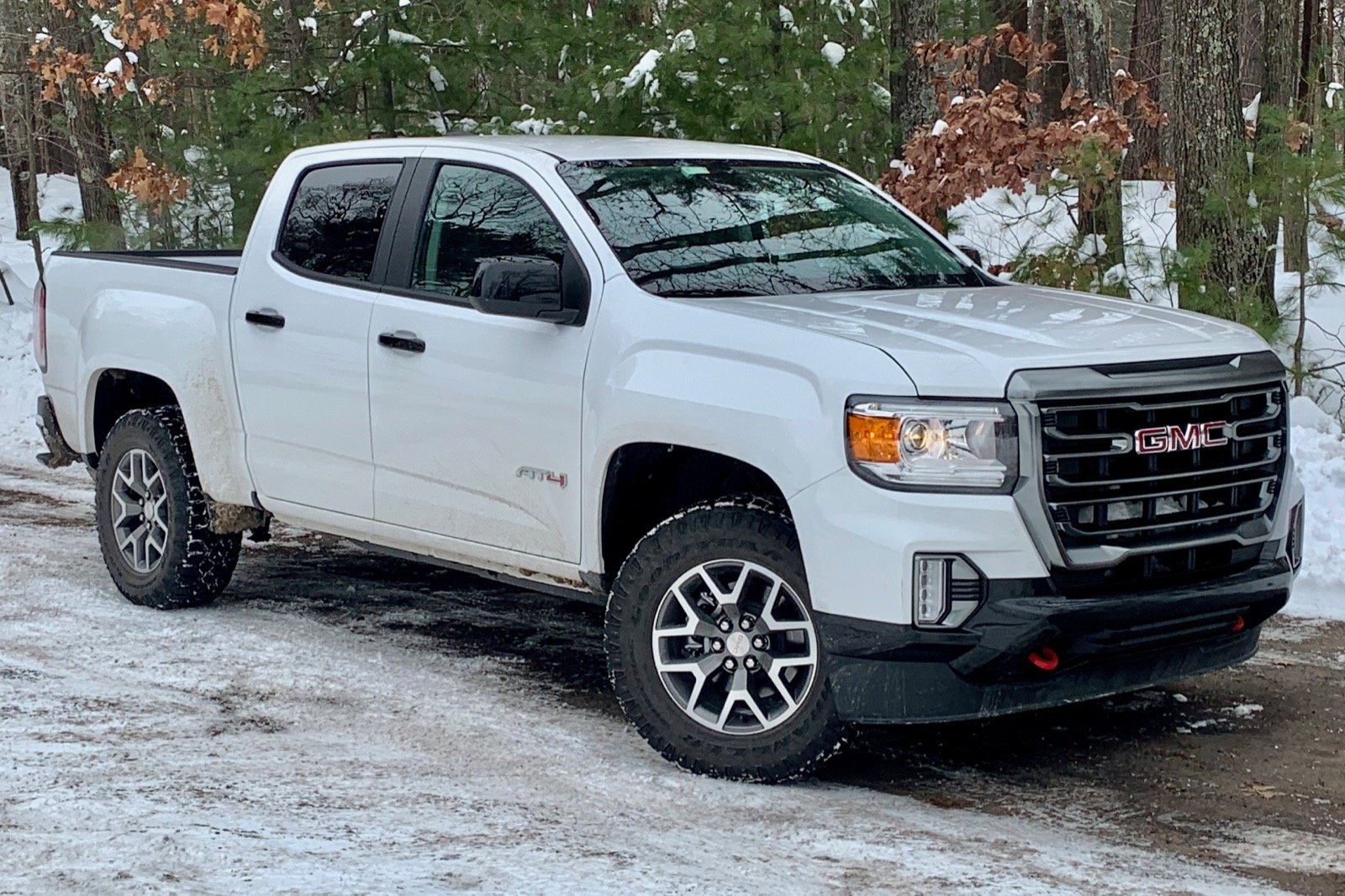 Midsize trucks are in a funny place. Despite being smaller and less capable than their full-size counterparts, they often command prices that are nearly as high. This is a tough spot from a value standpoint, making them more lifestyle vehicles than work trucks. For many truck owners, a full-size pickup is more truck than they need. If you’re longing for the biggie-biggie styling of a full-size truck, the refreshed 2021 GMC Canyon has you covered.

The Canyon has a new look and a new, capable AT4 trim, but still shows signs of aging. Were half of its competitors not in the same boat, this would be a bigger issue. Plus, the Canyon offers some helpful features to make it a fun vehicle for the weekend adventure or project. As long as bang-for-buck is not top-of-mind, the Canyon is a capable, enjoyable pickup. 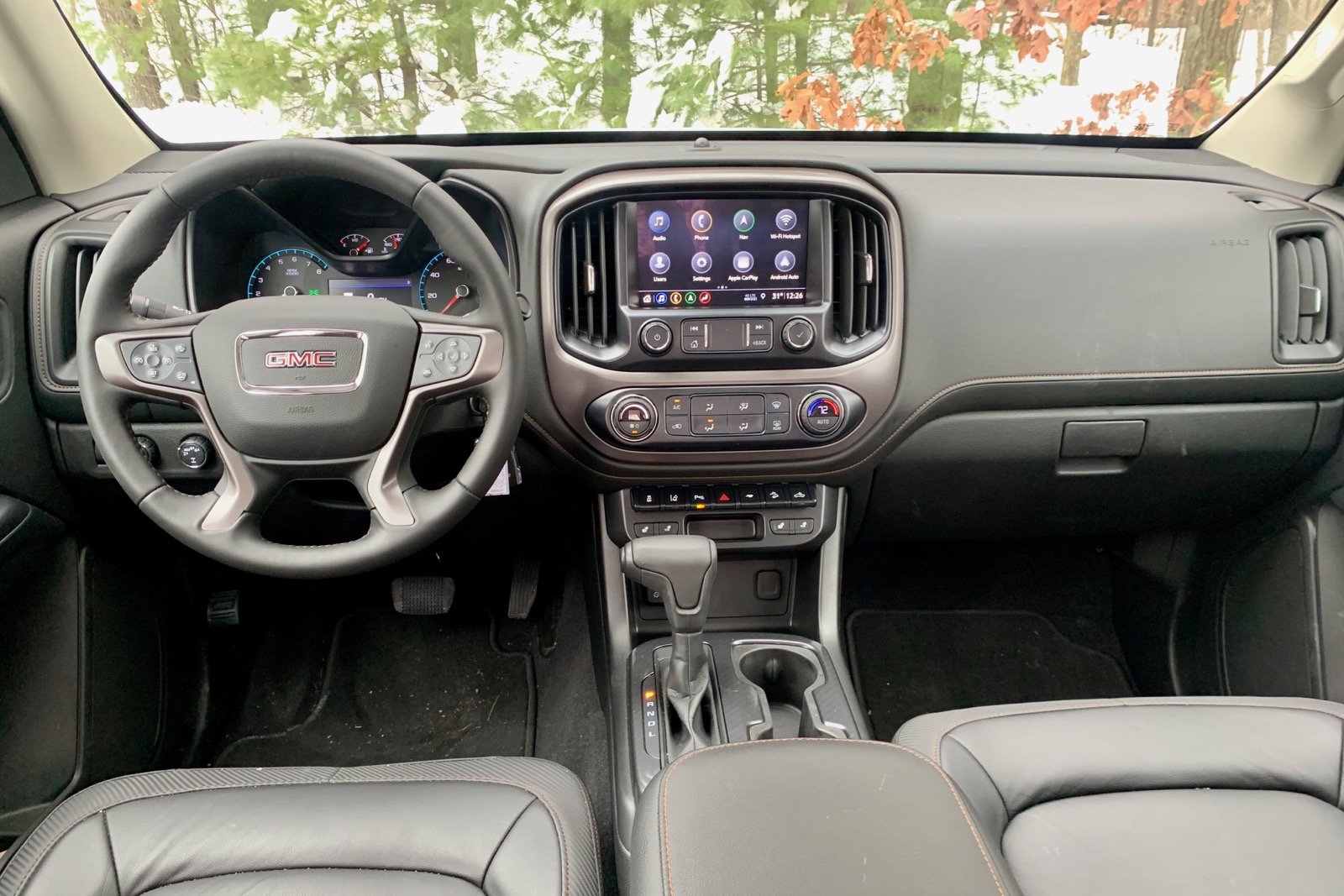 The second-generation GMC Canyon has been around for a while now. It first arrived as a 2015 model, after a two-year hiatus. Considering how woeful the first-generation truck was, the multi-year break was probably a good palate cleanser. The average lifecycle of a car or SUV is about six years, with a mid-cycle refresh after three. The Canyon (and its corporate fraternal twin, the Chevrolet Colorado) are receiving their first refresh after six years. Boy, does time fly!

The most notable changes to the Canyon include the enlarged grille and a revised front bumper. These changes bring the Canyon more in-line aesthetically with its full-size sibling, the GMC Sierra Otherwise, it’s largely the same truck. This would be an issue in the full-size truck market, where competition is stiff and pickups are updated on a shorter cycle. But look around the midsize pickup space, and you’ll see older rivals like the Nissan Frontier and Toyota Tacoma. The Ford Ranger is a relatively recent addition to the segment, but it arrived with an already-dated design. The only real contemporary offering is the Jeep Gladiator. A redesigned Nissan Frontier will join it in the next year. These two will make buyers seriously reconsider some of these older options. There is also the Honda Ridgeline to consider, which is less capable, but more comfortable than any other midsize pickup.

The cabin does not look as old as it could, thanks to the fact the larger Sierra carried on a largely similar cabin aesthetic—even through a redesign. The Canyon puts function first with a sensible layout for controls. That means the quality of materials comes second. There are plenty of hard plastics and mediocre fit-and-finish. But given this is the midsize truck market, that’s not as big an issue as it could otherwise be. And in that context, the Canyon has a handsome, but mainly useful interior.

Trims for the Canyon are Elevation Standard, Elevation, AT4, and Denali. The Elevation Standard is the base trim. It comes standard with 18-inch gloss-black aluminum wheels, signature LED running lights, the helpful CornerStep rear bumper, and black door handles and side mirrors. Inside, the Elevation Standard comes with manually adjustable front seats, power locks, two USB ports, and a standard 7-inch touchscreen infotainment system.

We drove the Canyon AT4, which is GMC’s new off-road-inspired premium trim level. It’s nearly on the same level as the Denali, without the glitz and chrome. It comes with 17-inch dark metallic aluminum wheels, aggressive Goodyear all-terrain tires, red tow hooks, off-road suspension, and added underbody skid plates. The AT4 is available with leather seating and heated front seats. 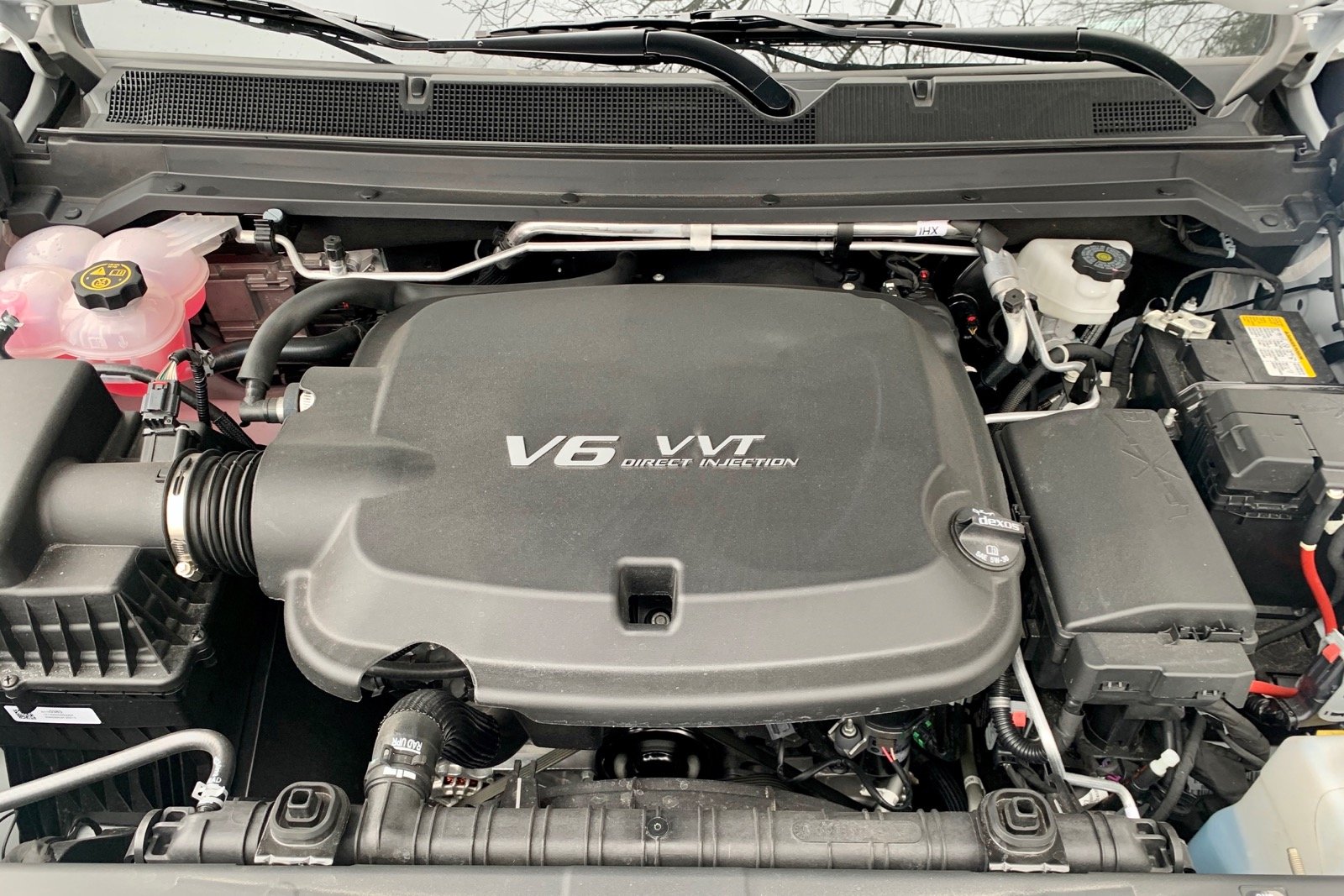 The Canyon is also available with a 2.8-liter Duramax four-cylinder turbodiesel engine. It puts out 181 hp and a stout 369 lb-ft of torque, routed through a six-speed automatic transmission. Power is sent to the rear wheels or available four-wheel drive (4WD).

The base gasoline four-cylinder engine has to work hard to move the Canyon around. Moving up at least to the V6 is a must. Even then, the V6 doesn’t feel that lively unless you punch it. With the pedal buried, the Canyon can move, but the throttle response isn’t progressive. The Duramax has the potential for real punch, but the pairing to the six-speed (rather than the eight-speed) limits its ability to always stay in the powerband.

We drove the AT4, which comes standard with the gas V6 and 4WD. It also comes with an automatic locking rear differential and hill-descent control for off-roading. On the trail, the AT4 is confident, and its added capability does not hinder its on-road driving manners. There’s the occasional shudder from a bump in the road, but it's otherwise well composed in most driving situations.

When equipped with the turbodiesel engine, the GMC Canyon can tow up to 7,700 pounds. That’s tied with the Chevy Colorado for best-in-class towing capacity. The Canyon also has a 1,605-pound payload capacity, which is above average for the segment. 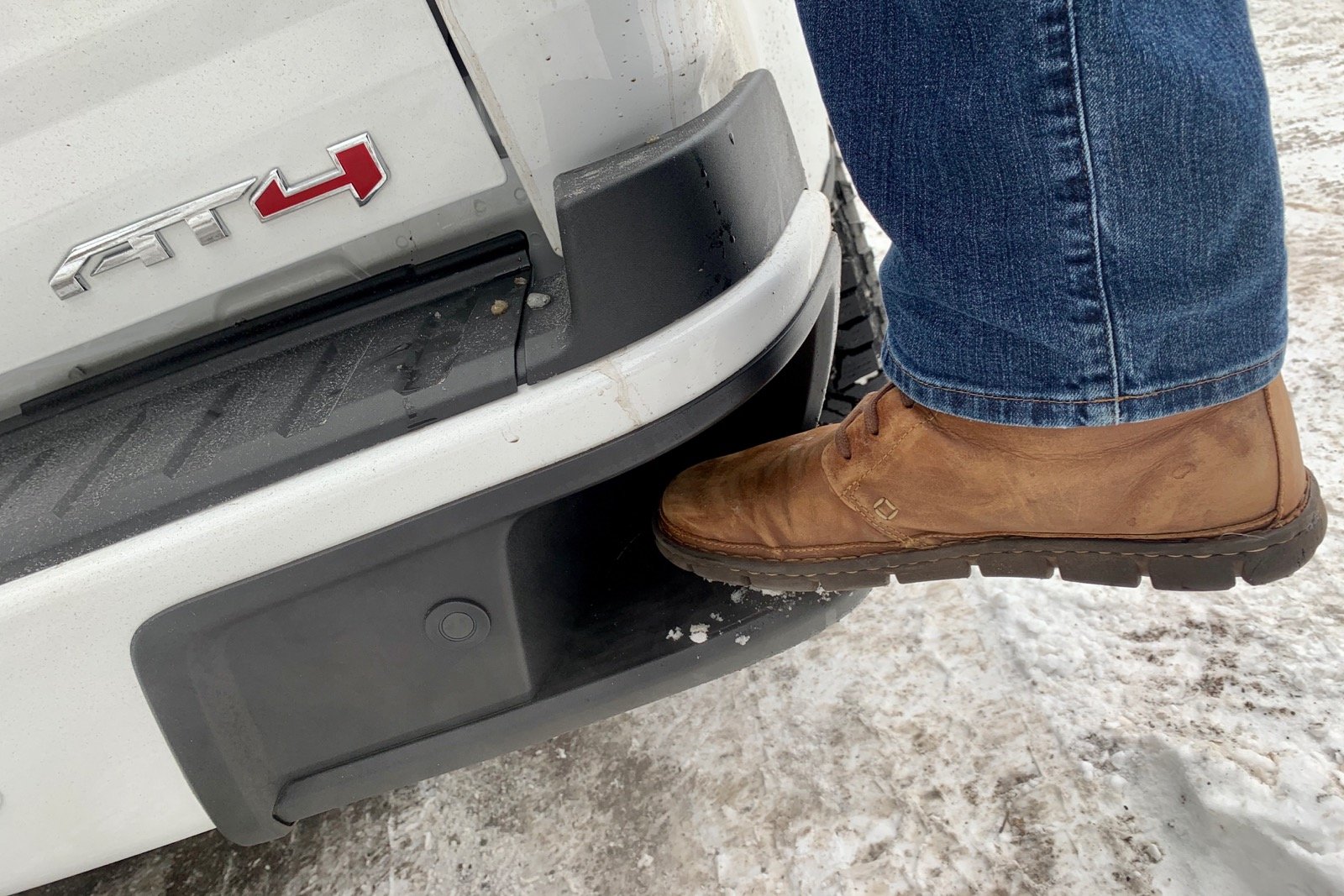 The 2021 Canyon is available in Extended Cab and Crew Cab variants. The Extended Cab features rear-hinged half-doors and small, second-row jump seats. These rear seats are best suited for children, or maybe a large gym bag. If you plan on using the rear seats, go for the Crew Cab, which has four full doors. It still doesn’t have a ton of rear-seat space but is far more usable.

The Canyon provides a commanding driving position, but the actual seat adjustment is a bit awkward. It’s hard to get a comfortable seating position. The Canyon has some usable space in the center console and center stack below the climate controls. The doors have small trays and cupholders, but it won’t hold any medium-sized items or even a large water bottle. The center cupholders are decently sized.

There are two bed sizes; a short (5-foot-2) box and a long (6-foot-2) box. The Extended Cab only comes with a long box, while the Crew Cab offers the choice of both. No matter the configuration, the Canyon comes with GM’s helpful CornerStep rear bumper. It consists of bed step-ups cut into either side of the rear bumper. It’s a simple solution for bed access, as opposed to some of the deploying bed-steps found on other trucks. 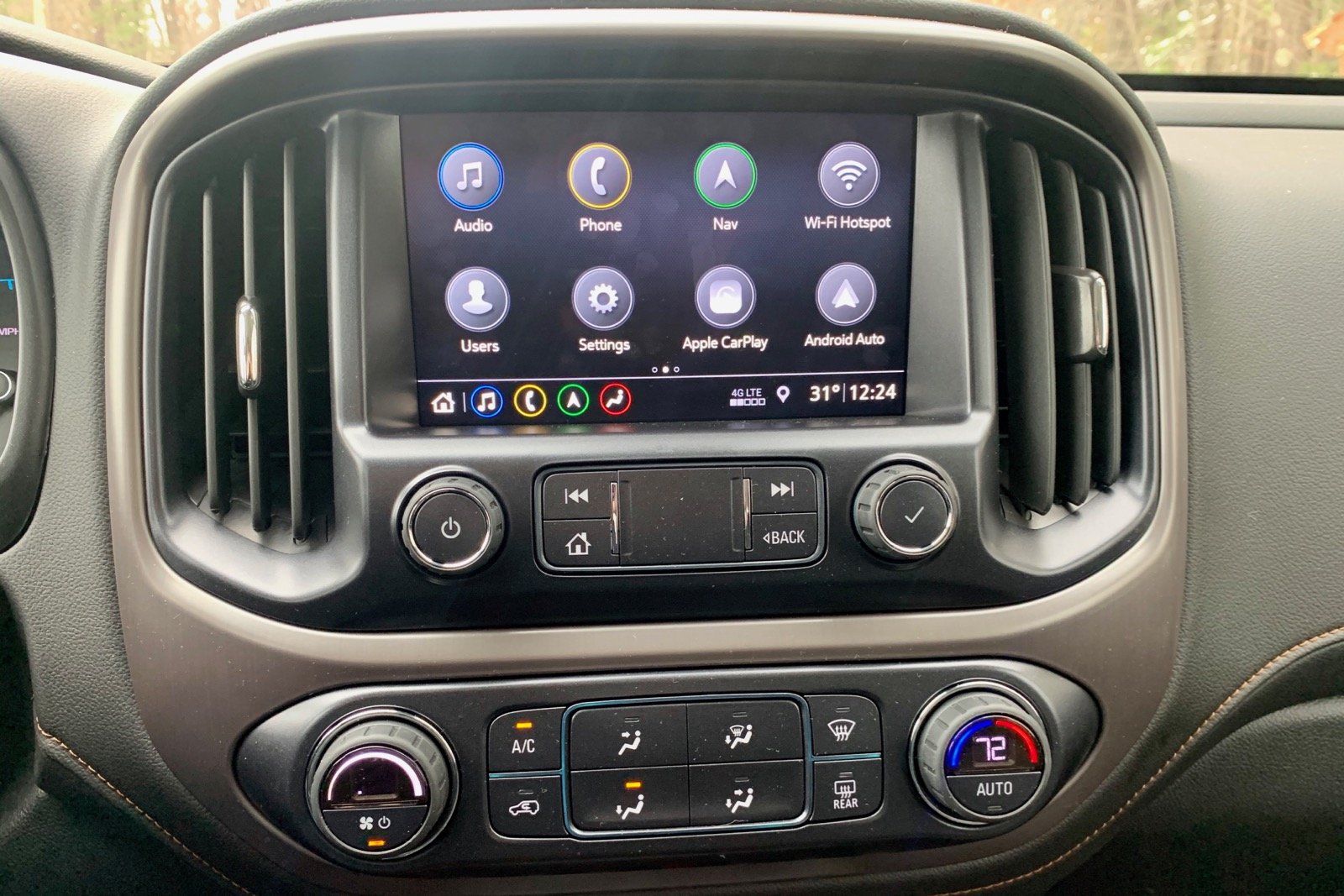 As mentioned, the Canyon comes standard with a 7-inch touchscreen. It runs the latest GMC infotainment system and includes Apple CarPlay and Android Auto. This touchscreen setup has crisp graphics and an easy-to-use menu layout. When in doubt, there are helpful hard buttons and dials below the screen. A larger 8-inch screen is optional on the Elevation and AT4 trims and is standard on the range-topping Denali. The Denali also comes with navigation, HD radio, and a wireless charging pad. The Denali also comes with a helpful 4.2-inch color driver display in the center of the instrument panel. It is operated via a directional pad on the steering wheel and allows for easy cycling through presets, vehicle settings, and driver information. 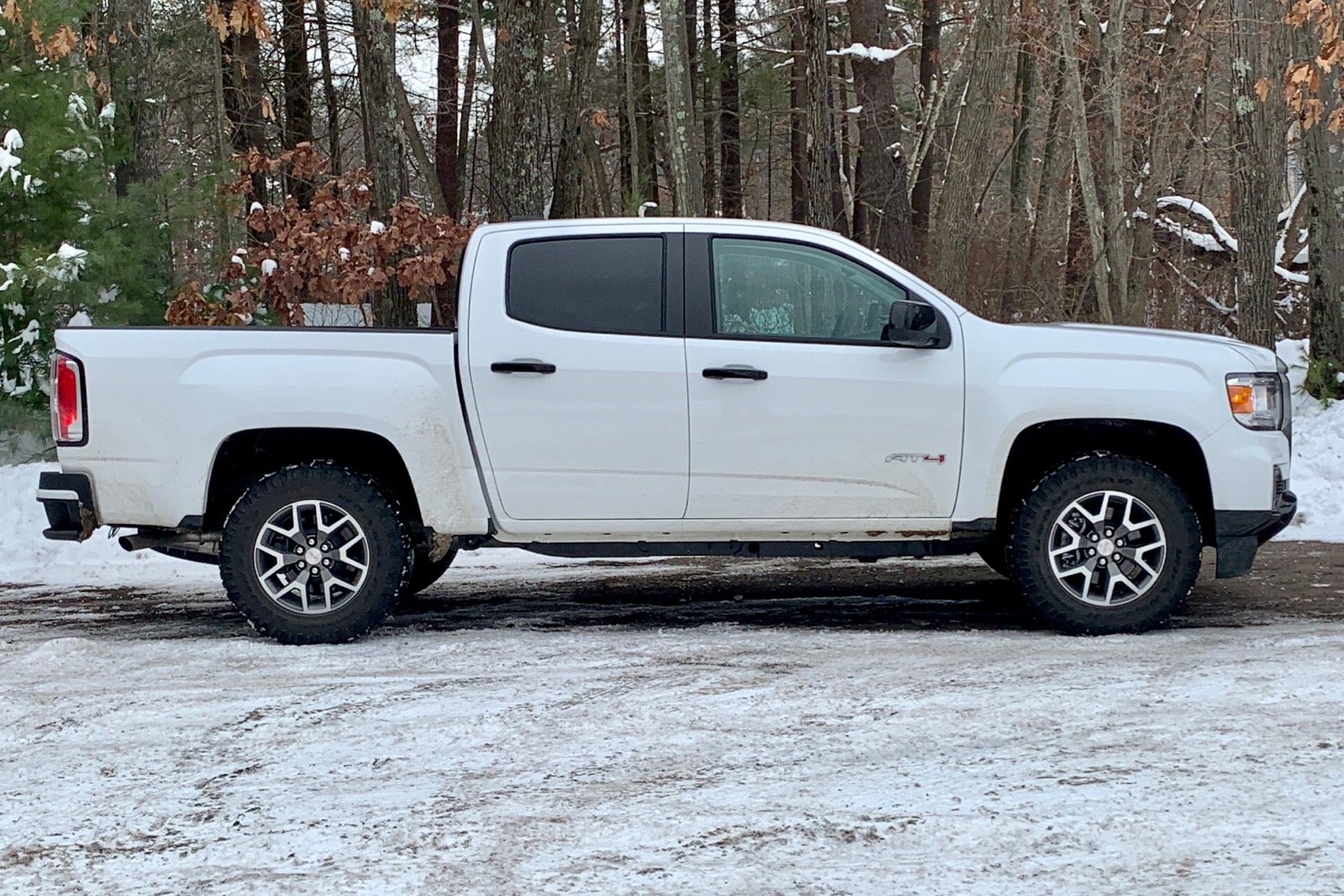 Standard safety features include a rearview camera, tire pressure monitoring system, front-and-side-impact airbags, traction control, and the Teen Driver system. Teen driver lets the owner limit speed and volume settings for secondary (aka teen) drivers. The Canyon is also available with the Driver Alert package. This includes forward-collision warning, lane-departure warning, and rear parking alert. This is standard on the Denali and optional on other trim levels. Many of these features are standard on other trucks, such as the Toyota Tacoma.

The Denali also comes with an upgraded HD backup camera and Hitch Guidance. The latter provides a helpful center guideline to line up the back of the Canyon to a tow hitch. 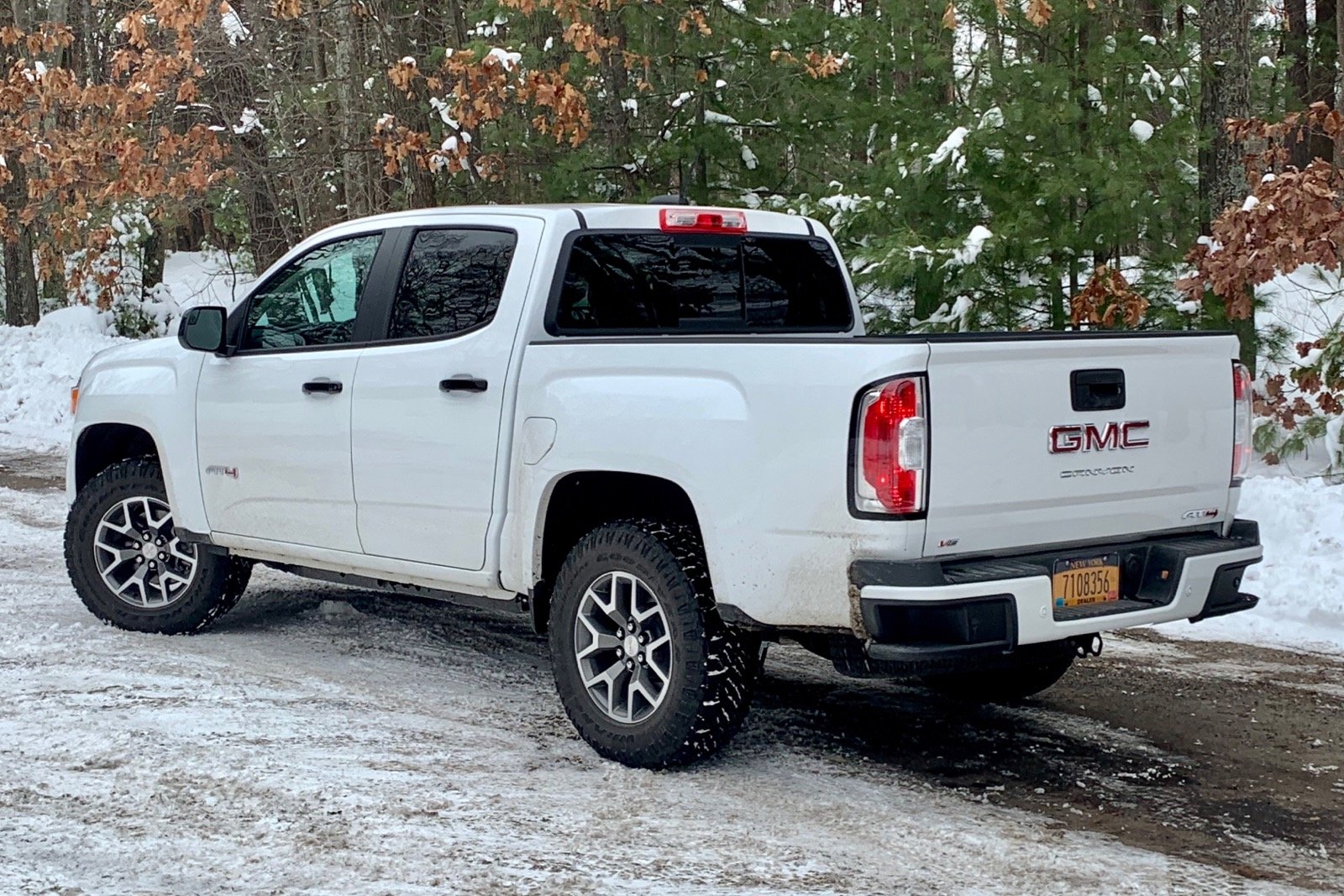 When equipped with the optional diesel engine, the Canyon is one of the more efficient midsize pickup trucks on the market. The rear-wheel-drive (RWD) version returns EPA-rated fuel economy of 20 mpg city, 30 mpg highway, 23 combined. With four-wheel drive, those figures fall to a still-respectable 19 mpg city, 28 highway, 22 combined.

That’s a considerable sum for a small pickup. Like many midsize trucks, the base version of the truck doesn’t offer much. And while the entry-level Jeep Gladiator costs thousands more ($33,565), it comes standard with V6 power, 4WD, and a full quad cab—all things most midsize truck buyers are looking for. Once you load up the Canyon with these features, the GMC truck costs about the same, if not more. That continues to ensure the Canyon and trucks like it are lifestyle vehicles. If the weekend warrior thing is for you, the Canyon combines big-truck styling with some capability for adventures. Just don’t expect it to do big-truck work.

Have you driven a 2021 GMC Canyon?
Rank This Car