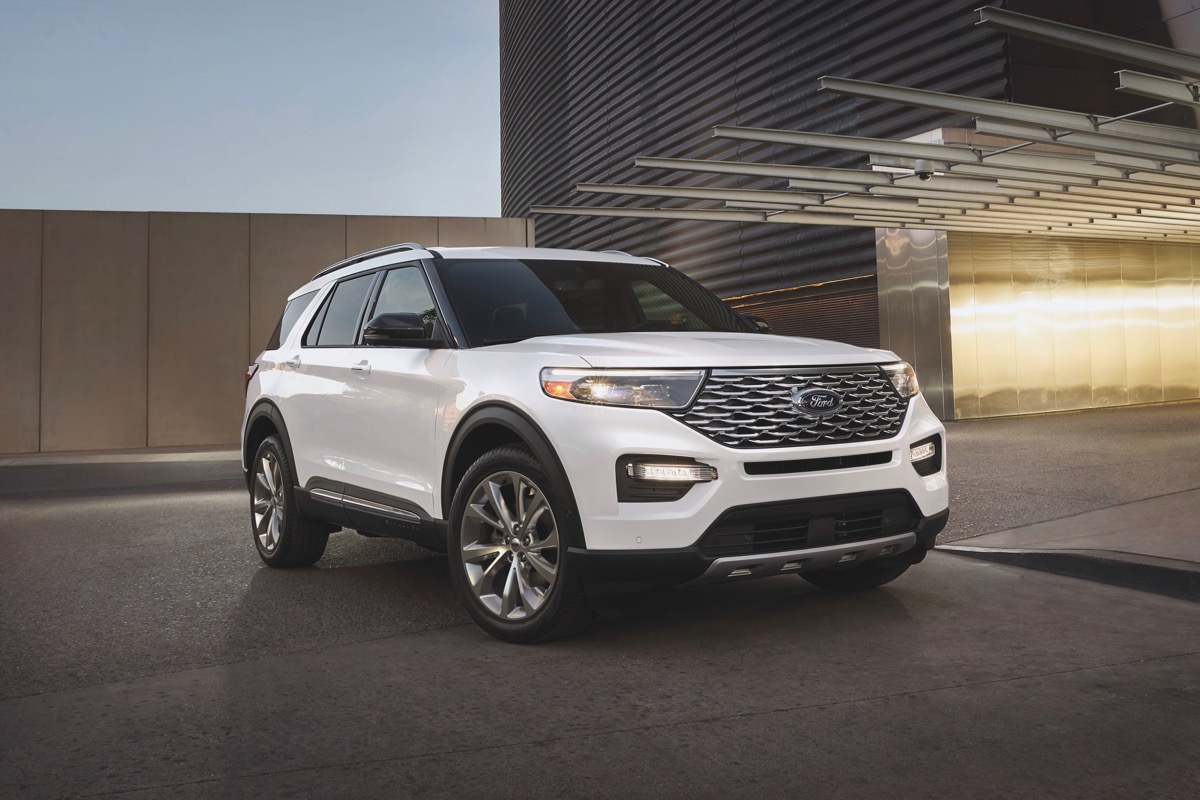 Looking for a New Ford Explorer in your area? 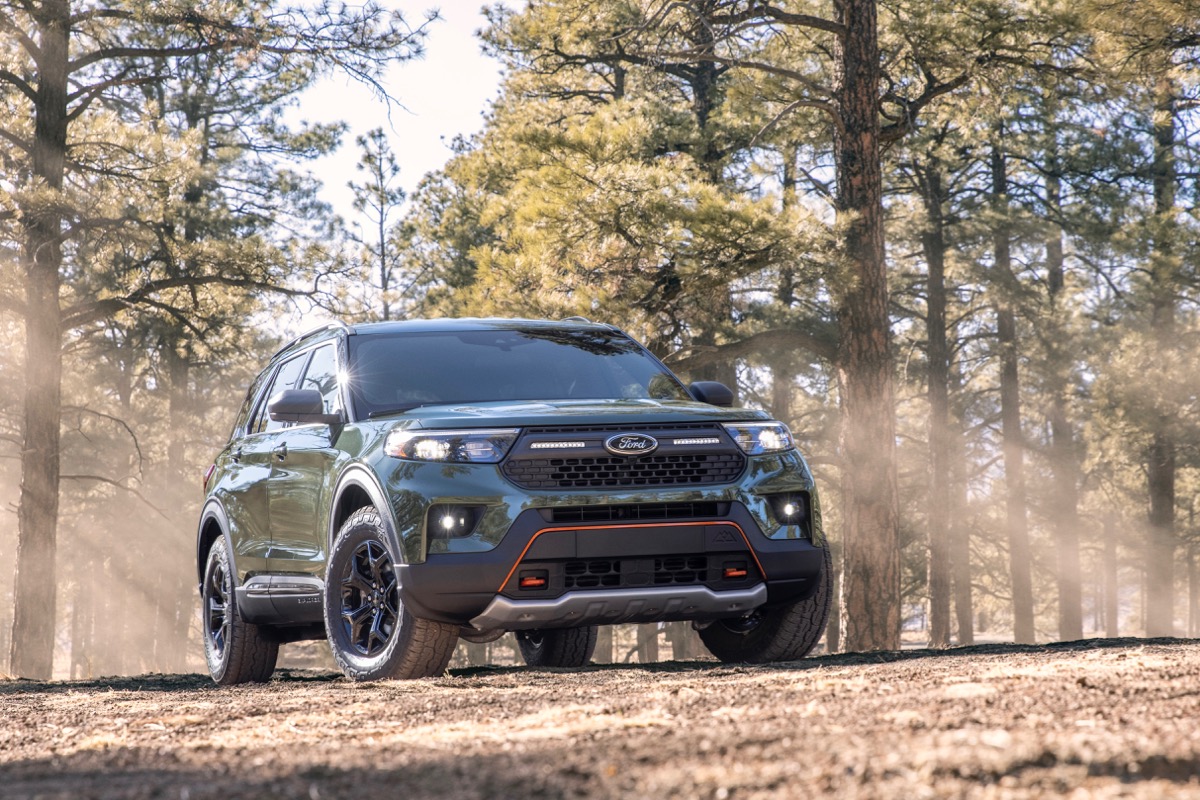 There was a time when everybody in America seemingly drove an Explorer. That may be an exaggeration, but not by much. In its first four years of production, Ford sold over a million examples. In 1998, Ford was selling its second-generation Explorer at a rate of nearly 440,000 per year. Whether your family purchased an Explorer or not, this was the nameplate that invented the midsize SUV segment.

Fast forward to the 2021 model year and the Explorer is in its sixth generation. It's now a three-row SUV that clocks in at a maximum of 4,700 pounds, with a price tag north of $50,000 for the Explorer Platinum trim level. Long gone are the days when it was the only game in town. Almost every automaker has a competitor. So how does the Explorer shake out for 2021? 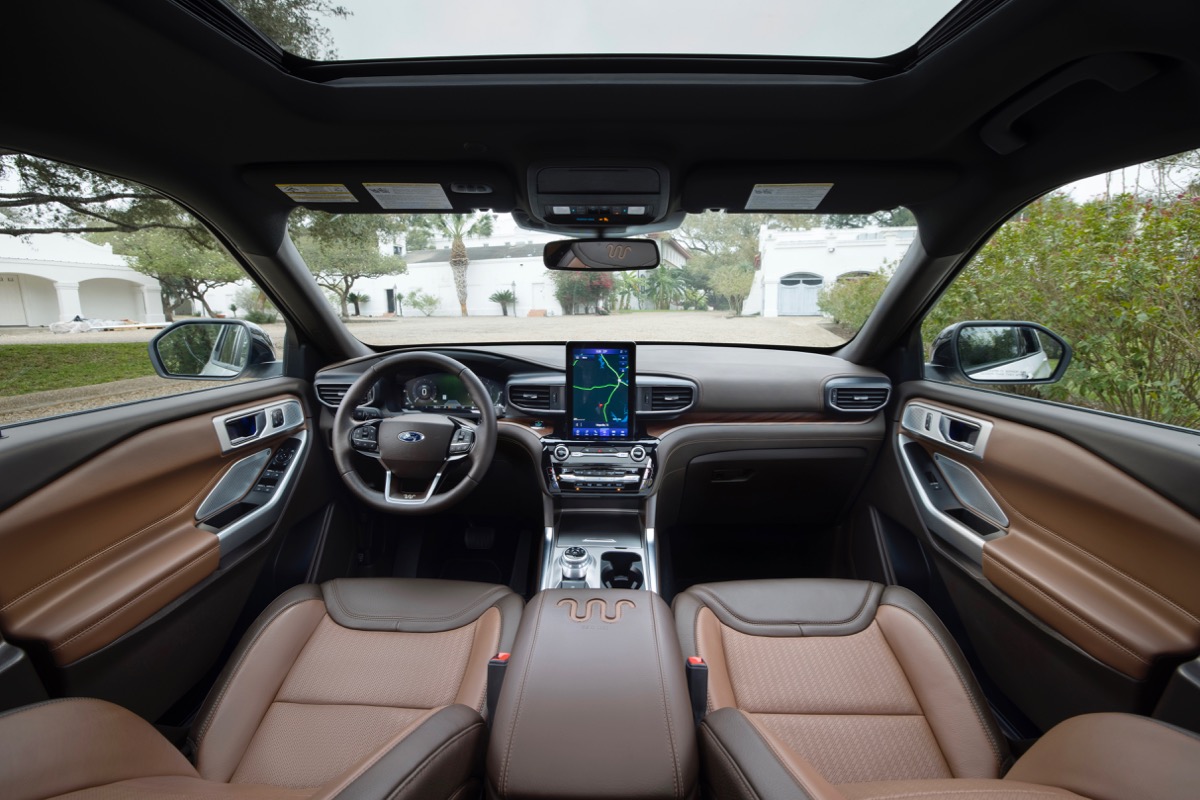 Ford has taken the “small, medium, large, XL” approach to SUV production. Whether you choose the Escape, the Edge, the Explorer, or the Expedition, you get a vehicle that bears a striking family resemblance, all starting with “E.” That’s almost a quaint throwback to the 1950s, when Ford and every other manufacturer hoped you’d buy one car and stick with the brand, ascending the price ladder for the rest of your life.

The Explorer definitely looks good from the outside. It’s a bit difficult to discern whether you’re looking at an Edge or an Explorer at a quick glance, but they certainly are distinctive from other brands' SUVs, with their sporty, raked belt lines and squinting visages.

Depending on the trim, you’ll have either a black grille, a bit of chrome, a black grille with a red stripe, or a full chrome grille. That’s the other thing about the Explorer: It has six separate trim levels, ranging from the rental car spec base trim, to the XLT, Limited, Limited Hybrid, Explorer ST, and finally, the Platinum. Prices ascend from $32,925 all the way to $52,730 and the exterior and interior look and feel gets better as you climb the ladder.

Inside, the Explorer delivers three rows of chairs as standard equipment, regardless of trim level, with cloth upholstery on the base model. Even the base model's seats are fairly comfortable but, as with all vehicles in this segment, adults likely wont' want to spend much time in the third row.

The dash is clean, with familiar gauges in the instrument panel, and a not-too-busy center stack dominated by an 8-inch LCD touchscreen, with large redundant knobs and buttons for the audio system and climate controls below. The center console houses the rotary gearshift, which frees up a lot of space for storage. There’s a covered bin ahead of the shifter, and two cupholders beside, plus the big storage bin covered by the center armrest.

By far, most consumers buy the XLT, at an expected rate of 56 percent according to the Explorer Order Guide. That opens up some better equipment like a power front passenger seat, nicer finishes, and a 6.5-inch instrument panel screen. You’ll have to step up to the mid-tier Limited trim to get leather upholstery. Leather is also standard on the ST, Platinum, Timberline, and King Ranch models. 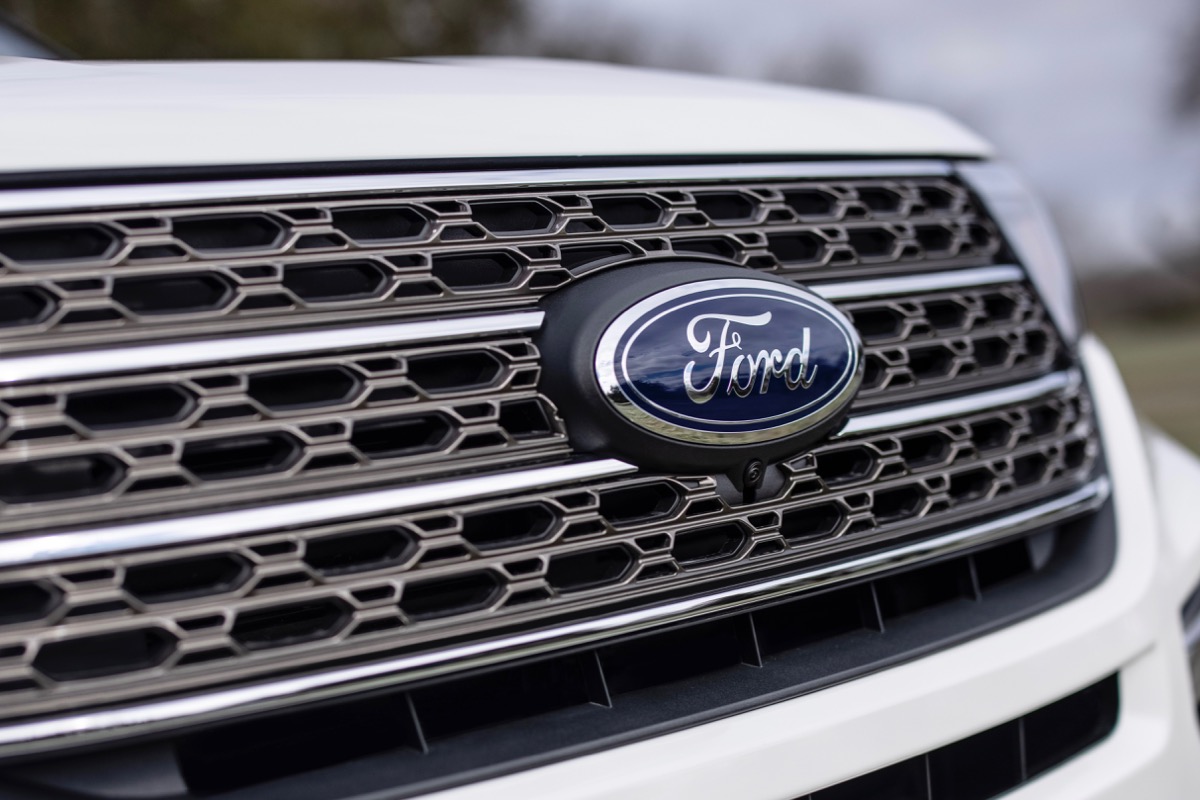 At its lightest, the Explorer tips the scales at 4,345 pounds. That makes its base 2.3-liter EcoBoost turbocharged four-cylinder powertrain sound outmatched, but it provides a surprising 300 horsepower and 310 pound-feet of torque, which beats out the Kia Telluride’s 291hp/262 lb-ft V6 engine by a fair margin. However, the Telluride is a few hundred pounds lighter than the Explorer, so that makes up for it a bit. Each Explorer trim is equipped with the same 10-speed automatic transmission, with SelectShift capability.

The Explorer Limited Hybrid offers a V6 hybrid drivetrain that increases power to 310 hp and 331 lb-ft of torque. All of the higher trims feature a 3.0-liter EcoBoost twin-turbo V6. This engine delivers 365 hp and 380 lb-ft of torque in most trims. The sport-oriented Explorer ST offers 400 hp and 415 lb-ft of torque. Of all the Explorer trims, the ST is the one that provides the most engaging driving experience, but if you’re buying what amounts to a full-size, three-row SUV, “engaging performance” is a stretch until you get into BMW and Porsche territory.

The Explorer is more about towing power than anything. Depending on trim, engine, and option packages, an Explorer will tow between 5,000 pounds and 5,600 pounds, according to Ford, making an 18-foot dual axle Airstream an easy tow. But that’s not exceptional in this class. The Subaru Ascent will tow 5,000 pounds with its turbo four-cylinder engine. To get a substantially higher towing capacity, you’re looking at something like the Chevrolet Tahoe, or the Ford Expedition, which offers the highest towing capacity of any SUV at 9,300 pounds. 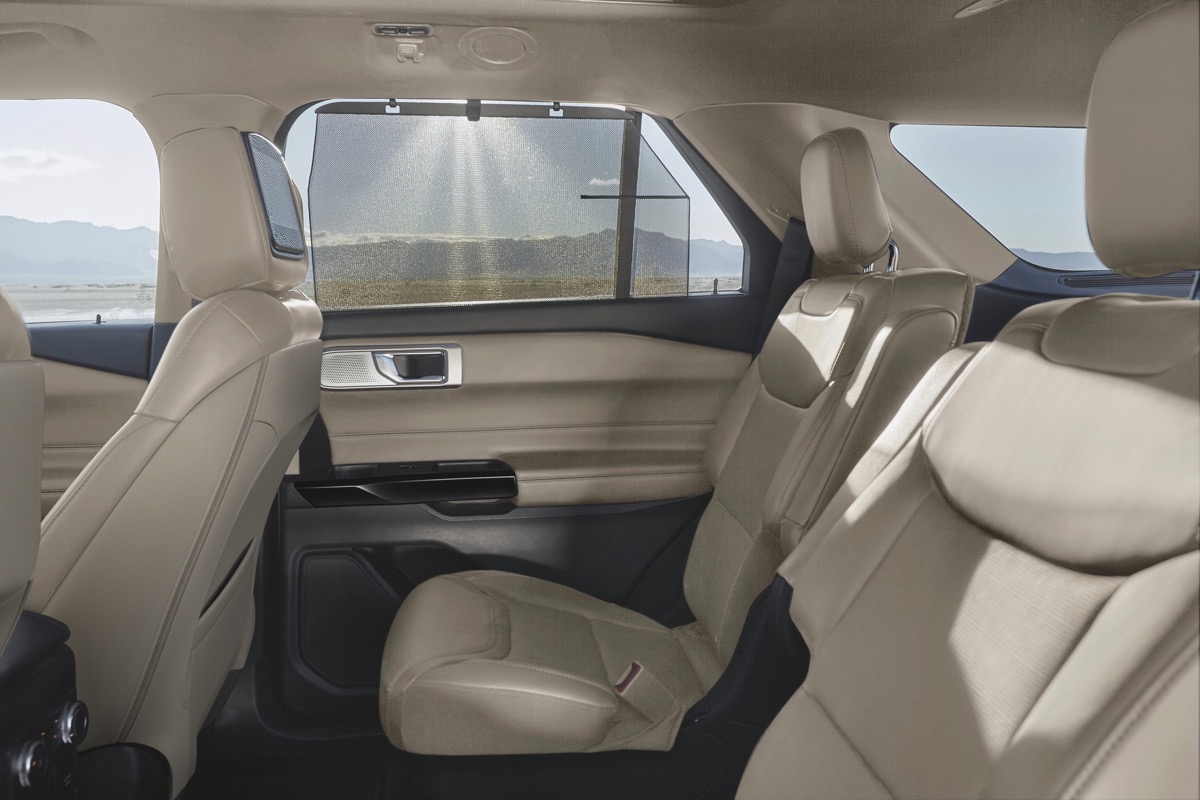 The base Explorer has seating for seven. Every other trim has captain’s chairs in the second row, so seating capacity goes down to six. The Explorer also offers 39 inches of legroom for second row passengers, which puts it ahead of vehicles like the Nissan Murano, and Buick Enclave, very slightly behind the Mazda CX-9 and Chevrolet Blazer, and far behind the Kia Telluride and Hyundai Palisade twins. You’ll also get more second row legroom out of the Ford Edge, but you lose the third row seat. 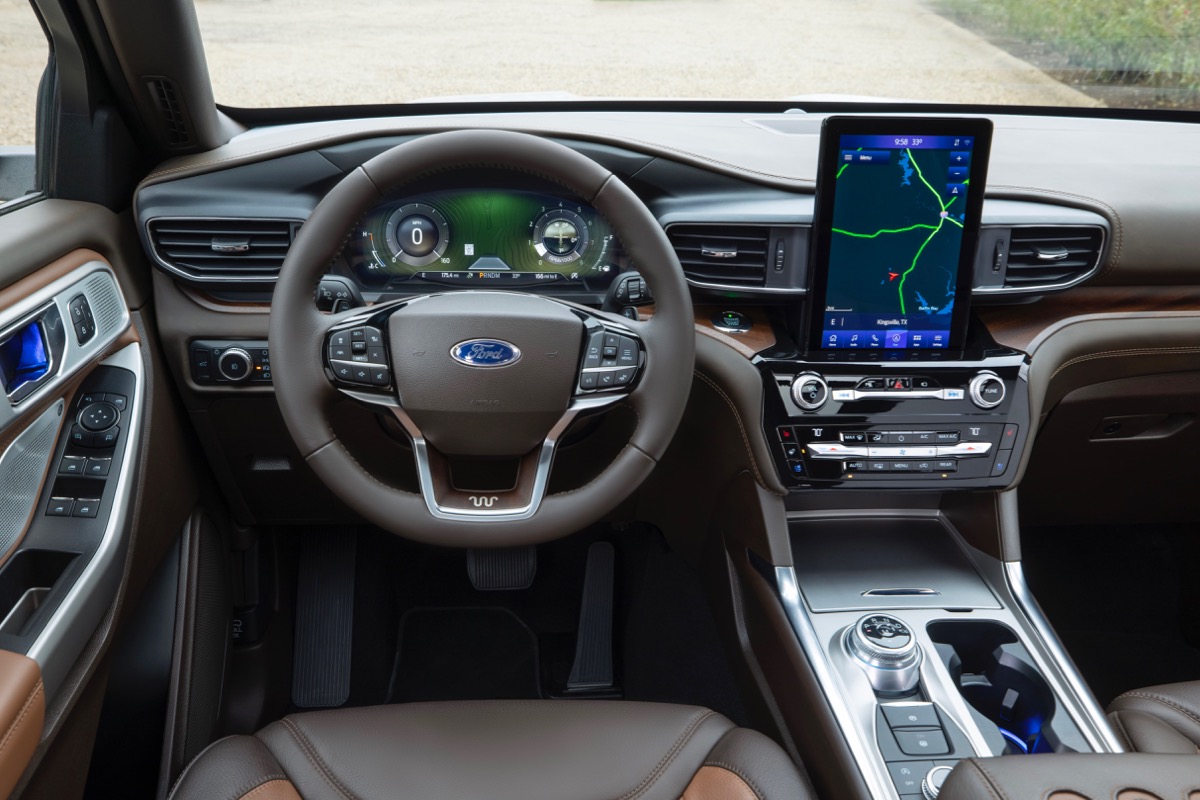 Even the base Explorer trim offers a fair amount of tech. Thankfully, the era of equipping lower trims with Chiclet-sized screens is over, so you get an 8-inch touchscreen as standard equipment. That offers the AM/FM radio, SiriusXM satellite radio, Apple CarPlay and Android Auto wired functionality, a 4G WiFi hotspot for up to 10 devices, Ford’s Sync 3 infotainment system with voice recognition, and a six-speaker audio system.

Stepping up to the Limited nets a 12-speaker Bang & Olufsen audio system and HD radio. Higher trims offer an upgrade to a 10.1-inch touchscreen and up to 14 speakers in the B&O sound system.

The Explorer provides charging access from two USB ports in the center console, plus five 12-volt power points (two up front, two at the rear of the center console and one in the cargo area). The ST replaces one of those power points with a 110-volt AC power outlet as standard equipment (it’s also available as an option on the Limited). From the Limited trim up, there’s a wireless charging pad mounted in the console. 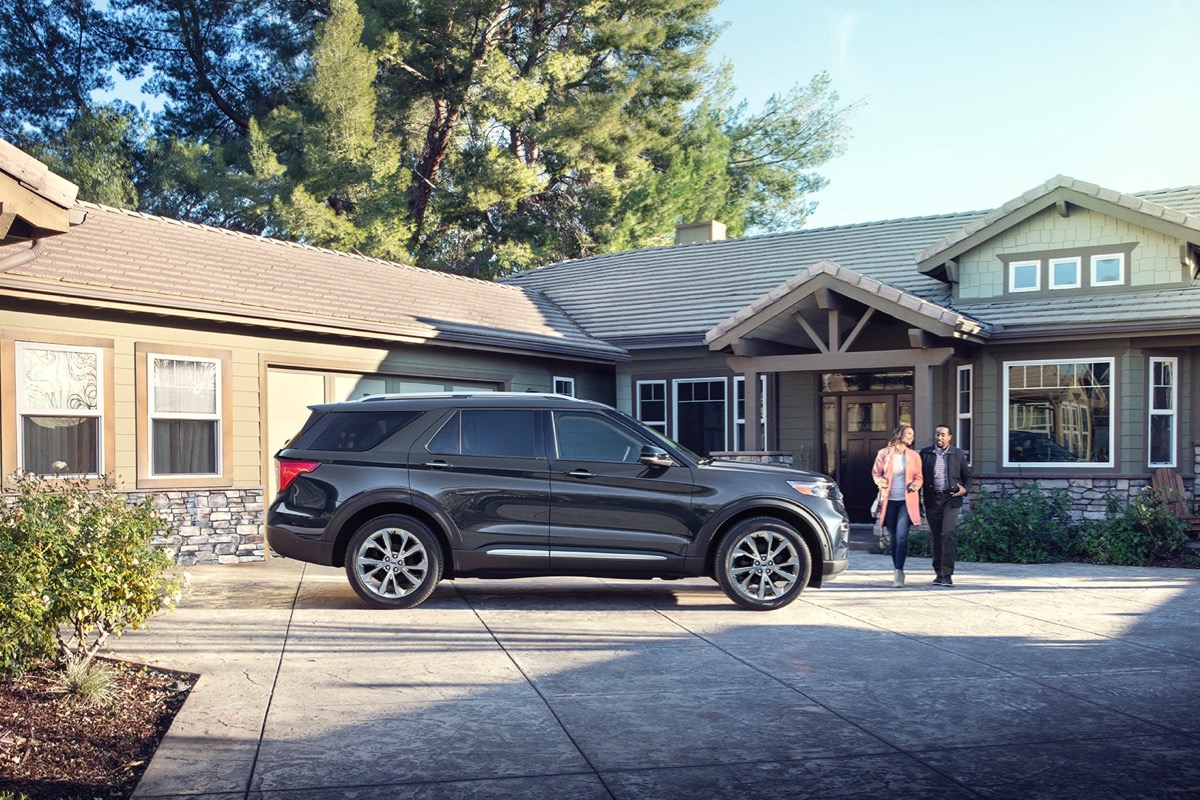 The Ford Explorer is rated as a Top Safety Pick+ by the Insurance Institute for Highway Safety (IIHS)—the highest rating. It achieved that rating with top “Good” scores on all of its crash tests, and an “Acceptable” rating for the availability of adaptive headlights.

We’re in a weird netherworld of advanced automotive safety where all of this equipment is available, but not necessarily standard on all vehicles, forcing customers to spend a ton of money and navigate packages to secure equipment that could save their lives. Forcing consumers to choose how safe they'd like to be by paying more is all that keeps the Explorer from a perfect rating here.

The Explorer offers an impressive list of active safety features at the base level. Every Explorer is equipped with the Ford Co-Pilot360 suite of technology, including auto high-beam headlights, blind-spot monitoring, rear cross-traffic alert, lane keeping assist and alert, forward-collision warning, pedestrian detection, automatic emergency braking, and dynamic brake support. If you’re looking at the Blazer, the Dodge Durango, the GMC Acadia or the Jeep Grand Cherokee, that equipment is all optional.

You will have to step up to at least the Limited trim to get some of the more helpful driver-assistance features that Ford reserves for the Ford Co-Pilot360 Assist+ suite, though. That includes adaptive cruise control with stop-and-go and lane centering, evasive steering assist, a forward sensing system, and rain-sensing front wipers. It also includes speed sign recognition, which shows speed limits on the instrument panel. 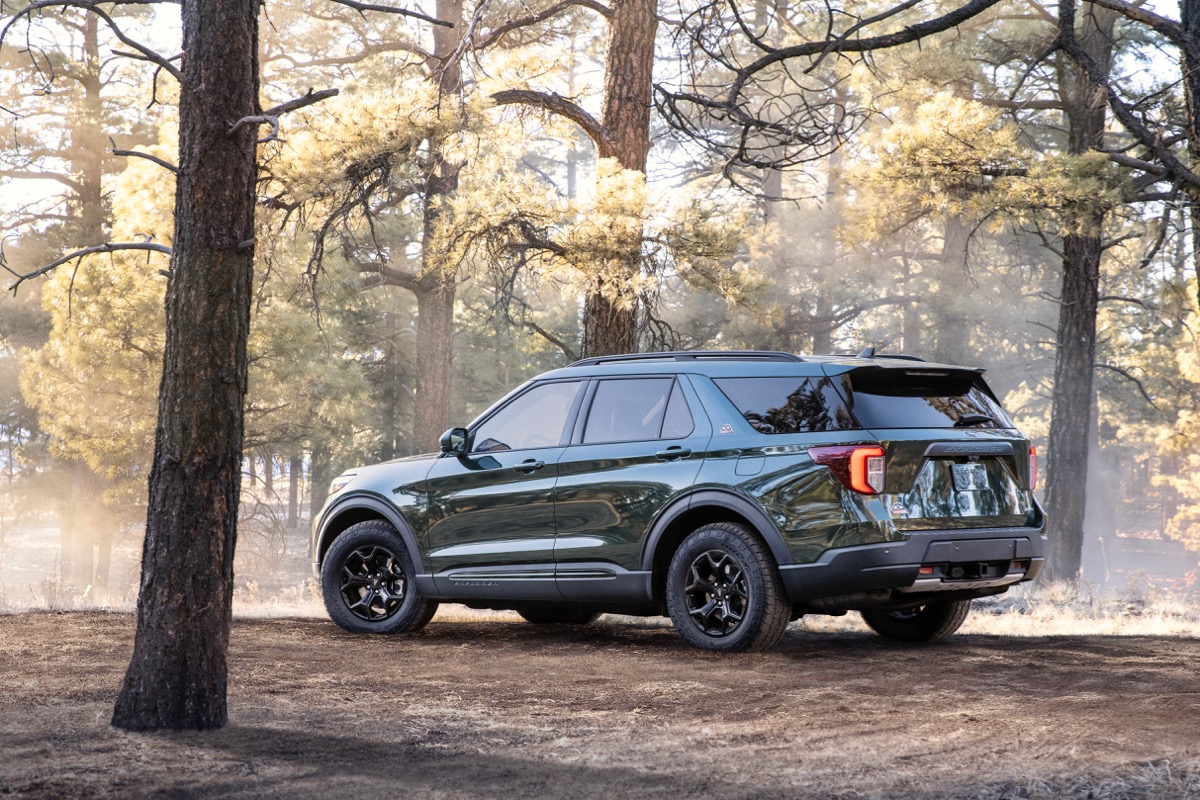 EPA fuel economy ratings for the Explorer is pretty grim, but that's also the case with most other three-row SUVs. With the 2.3-liter EcoBoost four-cylinder and rear-wheel drive (RWD), it’s possible to achieve 21 mpg highway and 28 mpg city, with a 24 mpg combined rating. Most buyers will likely opt for the turbo-four engine and all-wheel drive (AWD), which drops those numbers 1 mpg across the board.

The Explorer manages to beat the Jeep Grand Cherokee on price in almost every configuration, from base RWD, all the way up to the high trims. Where it loses is against newcomers like the Kia Telluride. The Kia's base price is comparable with the base Explorer, but the Telluride SX tops out at $53,755 MSRP with every single possible conceivable option. Even before you get to the long array of accessories offered in the Ford catalog, an Explorer Platinum maxes out at $60,780 MSRP.

The biggest issue Ford has with the Explorer is massive competition in this segment. Whatever the Explorer does well, some other manufacturer does it better, whether you’re looking for cargo space, technology, performance, passenger volume, or off-road ability. There’s nothing wrong with the Explorer, but at this price, there are a lot of newcomers like the Kia Telluride and the Hyundai Palisade that nuke it right out of the water. That’s why you’ll drive by Ford dealerships with plenty of Explorers on the lot, and not be able to find a Telluride in inventory anywhere.

Have you driven a 2021 Ford Explorer?
Rank This Car

Enter your zip to see incentives for a new Explorer in your area.

How Do I Reconnect The Rear Wipers?

With a bike rack on my Ford Explorer, the park sensor screams every time I back up. Disconnecting the sensor also disables the rear window wipers. I'd like to find a plug diagram to see which wires ...

2021 Ford Explorer ST: Hoe do you move the speedometer display from left to center? Is there any variables I should know? Thank you.