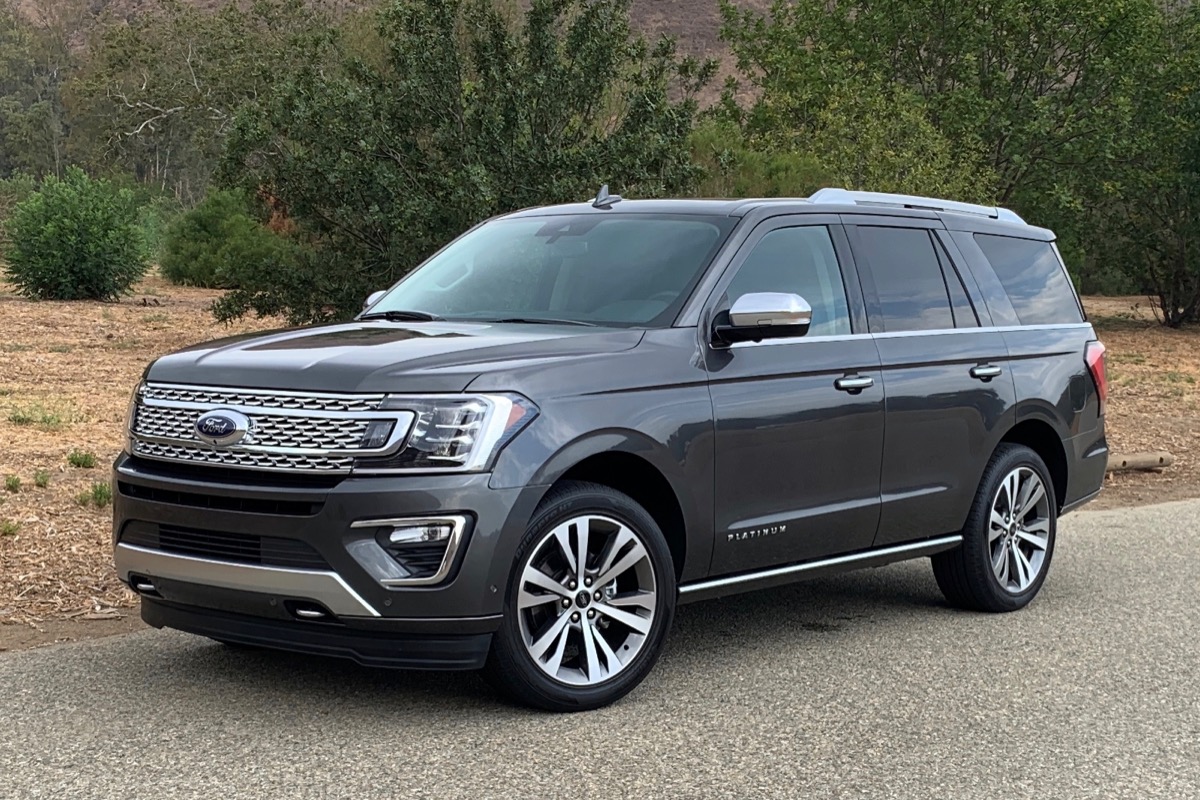 Looking for a New Ford Expedition in your area?

When towing, hauling, and carrying are a regular part of your life, the 2021 Ford Expedition stands ready to serve. 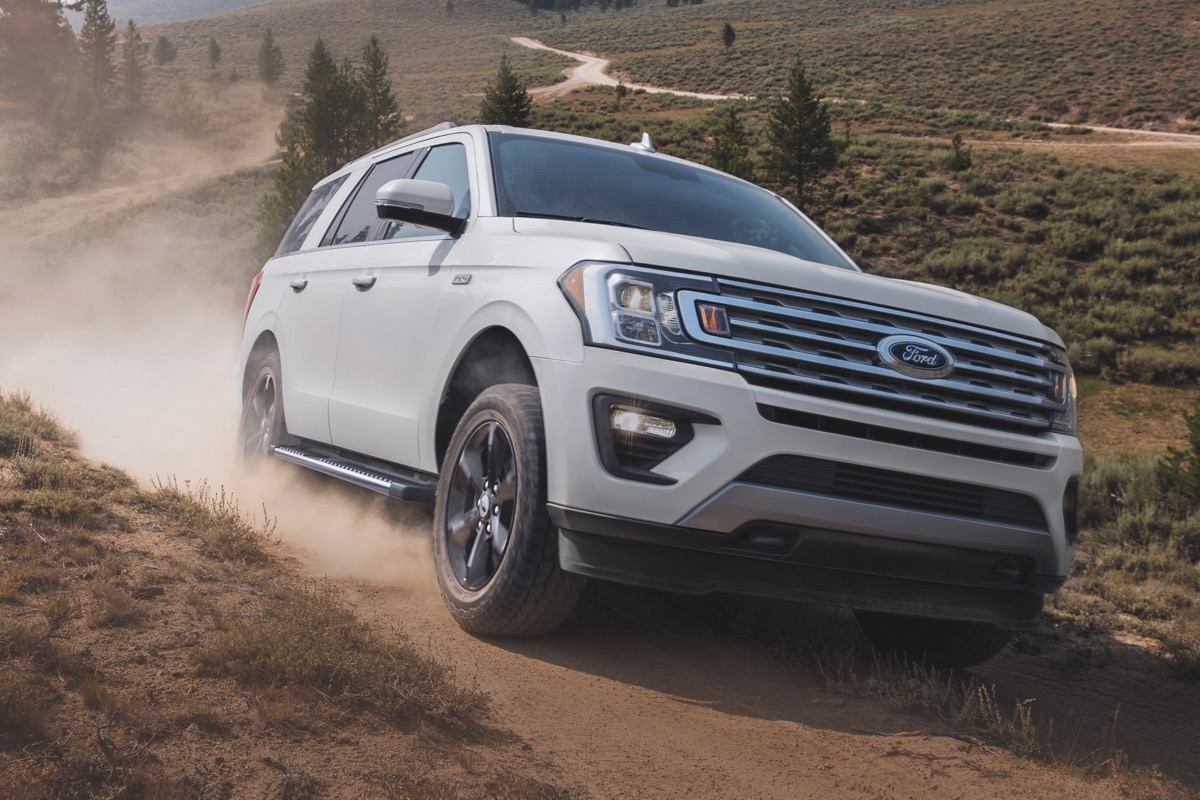 More full-size SUV buyers should consider the 2021 Ford Expedition. Undeniably appealing and unendingly useful to anyone who tows a trailer, hauls cargo, or carries people on a regular basis, the Expedition is a competitive alternative to the Chevrolet Tahoe/Suburban, and GMC Yukon/Yukon XL. And it remains so, despite recent redesigns of the triplets from General Motors. 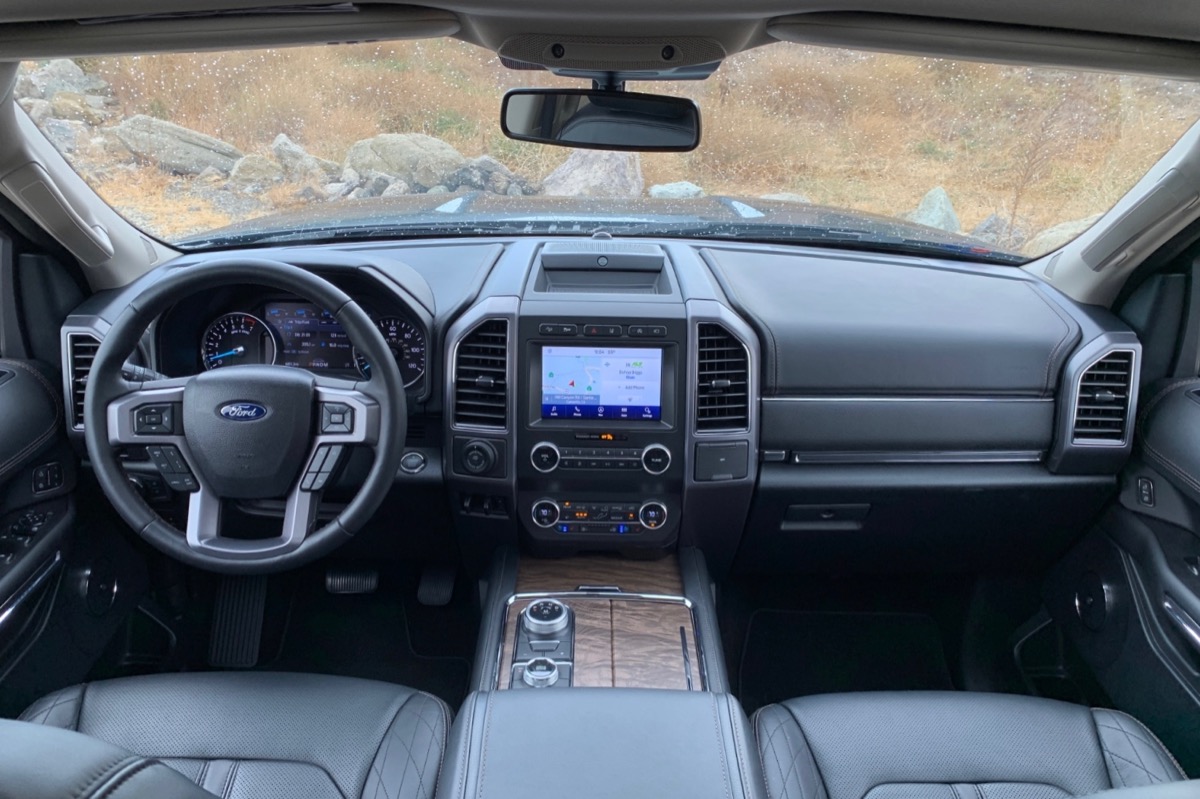 Six of us landed at Los Angeles International Airport after a restless redeye flight from Maui. Each of us had a carry-on suitcase and a backpack, and after riding around in a rented Dodge Grand Caravan for a week, the plush and roomy 2021 Ford Expedition Platinum was a sight for sore, bleary eyes and tired, surf-worn bodies. But there was a problem, as you’ll see.

Platinum trim denotes the most luxurious version of the Ford Expedition. It caps a lineup that starts with the XL STX (starting at $50,595) and includes the XLT, Limited, and King Ranch before culminating with the Expedition Platinum ($74,375 MSRP). Upgrading from the standard-length model to the extended-length Ford Expedition MAX runs an extra two grand, and is worth every penny.

Ford left our test vehicle at the airport for us. In addition to Platinum trim, it had Magnetic gray paint, four-wheel drive (4WD), a Heavy Duty Trailer Tow Package, an electronic limited-slip differential, and second-row captain’s chairs. The grand total came to $80,510, including the $1,695 destination charge to ship it from Ford’s Louisville, Kentucky, assembly plant to the dealership.

Power-deploying running boards welcomed us as we unlocked the SUV and powered open the rear liftgate. Immediately, it was obvious that the Expedition would be unable to accommodate our cargo, nearly all of which had fit into the storage well aft of the Grand Caravan’s third-row seat. So we stacked what we could behind the Expedition’s third row and started filling the floor space within the cabin. One unlucky passenger carried her suitcase on her lap for the 40-mile ride into the suburbs.

While this experience definitively underscores how minivans are incredibly useful tools for daily living, they certainly don’t have the big and bold presence of a full-size SUV like the Expedition. That’s especially true of the Expedition Platinum, which wears an intricately detailed chrome grille, massive 22-inch machined-face aluminum wheels, and tastefully applied brightwork all around. It is a good-looking vehicle.

Besides, the easy fix to our predicament would’ve been the extended-length MAX version, which easily carries up to eight people and their luggage all at the same time. At a minimum, had the test vehicle included the standard 40/20/40-split folding second-row bench seat, we could have folded down half of the third-row seat, likely giving us just enough room to make the roll-aboards fit somewhere other than a passenger’s lap. But with the captain’s chairs, this wasn’t possible.

After arriving home and unloading the luggage, the Expedition’s leather-lined cabin served our six-person crew well. To outfit the Expedition, Ford pulls from the same parts bin as the previous-generation F-150 pickup truck, and while much of the interior’s materials and fittings justify the Platinum’s price, acres of hard plastic serves as a reminder of the Expedition’s origins. If that’s a problem, know that a Lincoln Navigator is basically the same thing as the Expedition, but much nicer inside. 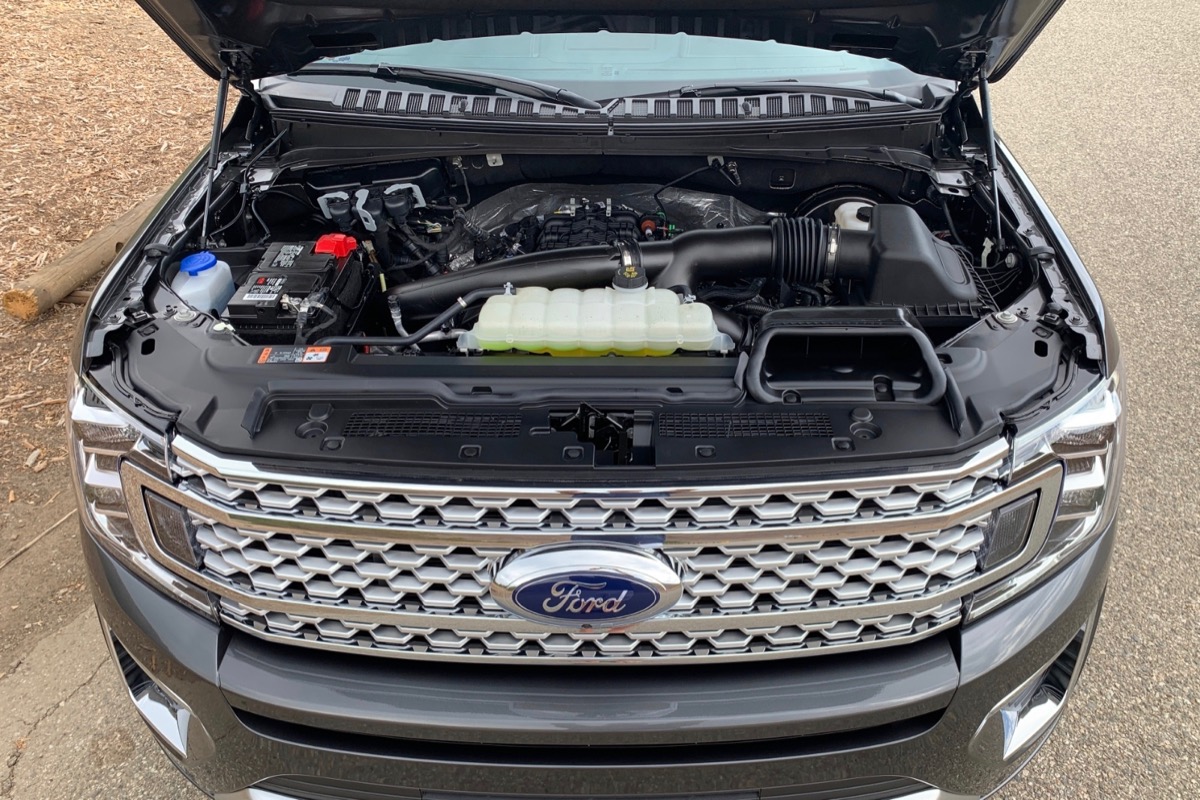 Towing capacity ranges from 9,000 pounds to 9,300 pounds, depending on specification. Ford offers its Pro Trailer Backup Assist technology on the Expedition, which allows the driver to “steer” the trailer using a knob on the dashboard while the SUV takes control of the actual steering to maneuver the trailer exactly where you want it to go.

Acceleration impresses, even with a full load of passengers and cargo. The twin-turbo V6 emits a slightly guttural chuff of an engine note, and while it’s not the resonant rumble of a V8, it is nevertheless pleasant to hear. The transmission draws no undue attention to itself, and both the steering and the brakes work as expected.

Ride quality suffers from the Platinum’s 22-inch wheels. The Platinum includes a standard adaptive damping suspension, but the shorter-sidewall tires transmit plenty of road shock into the cabin. However, because the Expedition rides on a four-wheel independent suspension, it remains glued to the road rather than feeling loose and jittery over bumps.

Our Expedition Platinum did not have this option, so we stuck to the pavement, where the SUV averaged 17.1 mpg on our evaluation loop. Official fuel economy ratings from the Environmental Protection Agency (EPA) say the Expedition 4WD should get 19 mpg in combined driving. 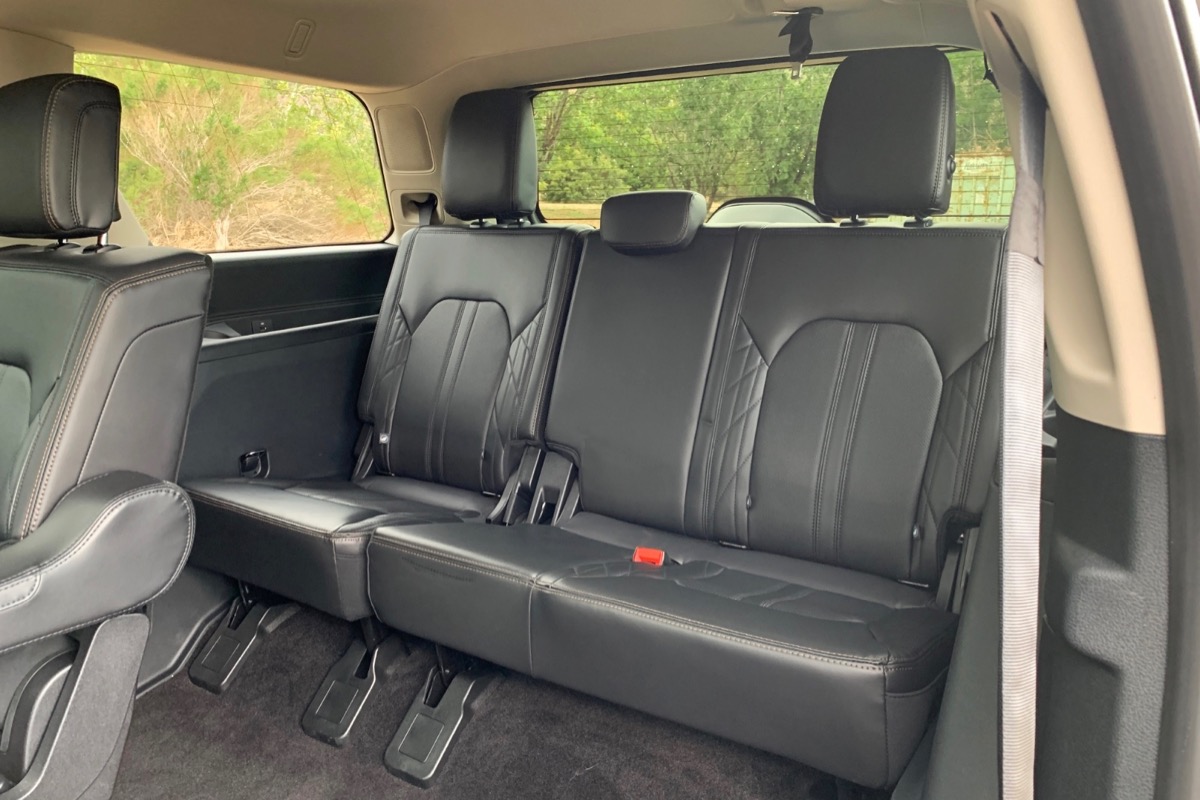 We’ve already addressed the regular-length Expedition’s primary form-and-function shortcoming. Namely, it can’t transport more than five people and their luggage at the same time. If you need an SUV for that purpose, be sure to choose the long-wheelbase Expedition MAX.

Otherwise, the 2021 Ford Expedition excels when it comes to comfort and utility. Climb aboard using the power-deploying running boards, and you’ll find large, wide seats for every passenger—including adults assigned to the third row. However, only the test vehicle’s front seats offered a massage function, sparking jealousy from the offspring.

The Expedition’s independent rear suspension has long ensured comfort in every seating position, and now Ford’s competition from General Motors has finally adopted the same approach with the new 2021 Tahoe, Suburban, and Yukon models.

Storage for odds and ends is plentiful, and with the third-row seat folded down cargo volume expands from 19.3 cubic feet to 57.5 cubic feet. The maximum volume behind the front seats measures 104.6 cubic feet. When loading heavy items, keep in mind that the cargo floor’s liftover height is high. 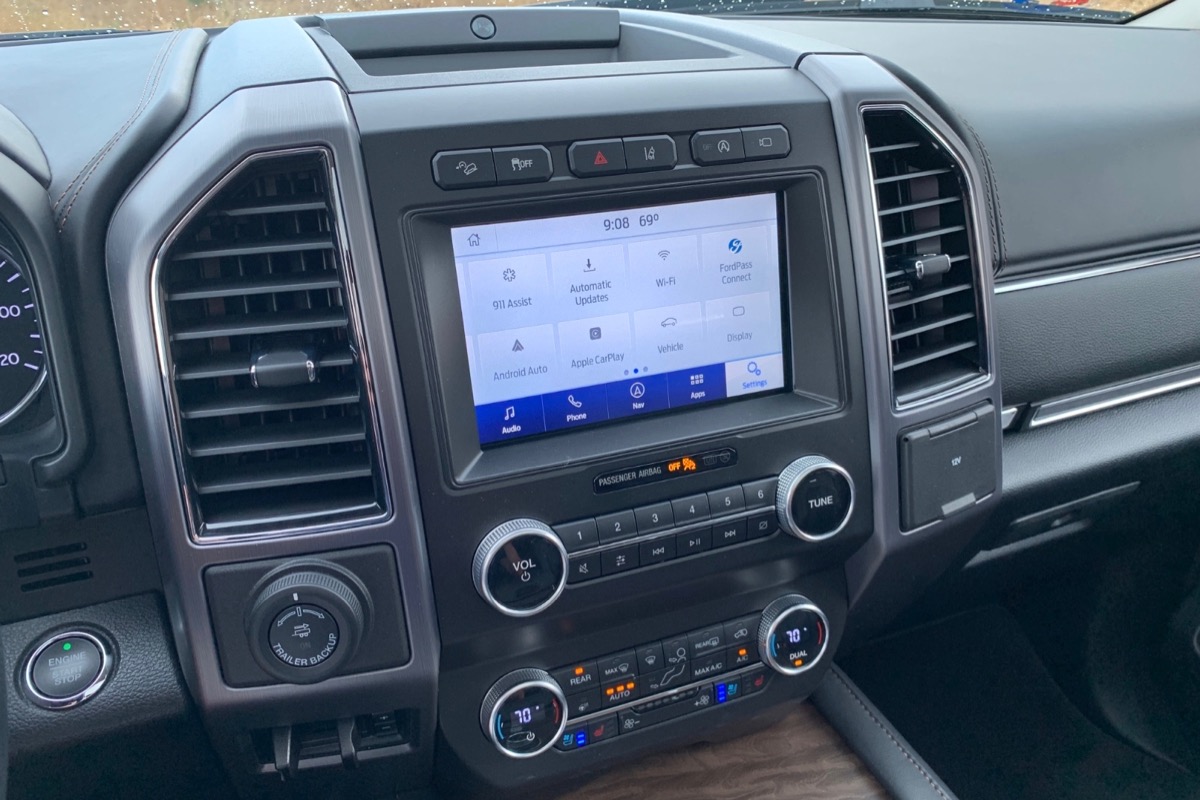 Ford’s Sync 3 infotainment system is rapidly advancing in age. Though the user interface remains friendly, its recessed 8-inch touchscreen display looks positively tiny nestled into the center of the Expedition’s dashboard, and the system is sometimes slow to respond to physical and voice inputs.

If the display and underlying platform are getting old, Sync 3 nevertheless supplies the features people seek from a modern infotainment system. They include Apple CarPlay and Android Auto, SiriusXM satellite radio, FordPass Connect services, an available 4G LTE WiFi hotspot, and a navigation system.

Amazon Alexa compatibility is also a part of Sync 3, and Ford says the voice recognition system is enhanced for 2021. Based on our evaluation, this means it can respond to basic naturally spoken commands but requires more specific language to execute more complicated requests.

The test vehicle had an impressive 12-speaker Bang & Olufsen premium sound system and wireless smartphone charging but did not include the available dual-screen rear-seat entertainment system. Offered for all Expeditions except the XL STX, this setup includes dual viewing screens, a DVD player, gaming system inputs, the ability to stream content from a mobile device, and Slingbox compatibility. 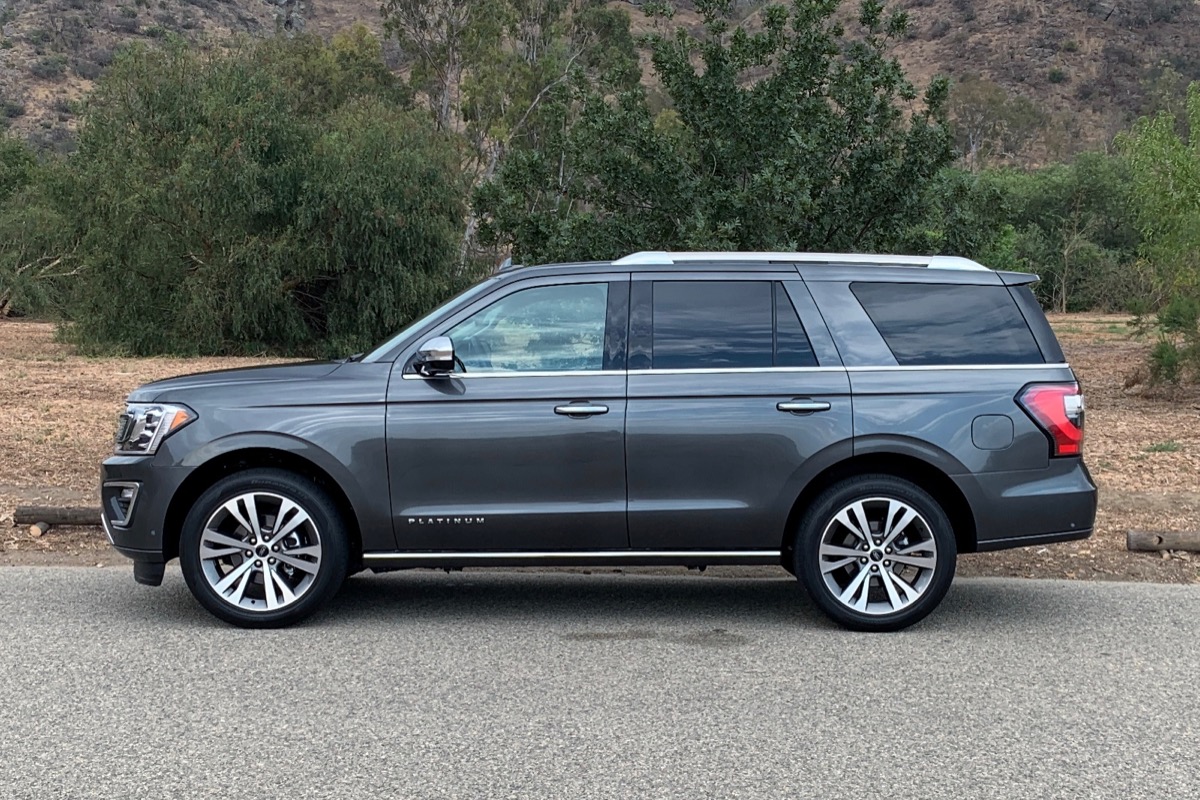 With a minimum 5,368-pound curb weight, the 2021 Expedition has a safety advantage over most other vehicles on the road. However, the Insurance Institute for Highway Safety (IIHS) hasn’t performed crash-tests on this SUV in order to ascertain what happens when it collides with something of a similar size and weight or a stationary obstacle like a bridge abutment.

According to the National Highway Traffic Safety Administration (NHTSA), however, the Expedition earns a five-star overall crash-test rating, the highest one available. Do note, however, that with RWD the Expedition’s rollover-resistance rating is just three stars. With 4WD, the SUV earns a four-star rating in this regard.

Starting with Limited trim, the Expedition offers an available adaptive cruise control system with stop-and-go capability as well as a semi-autonomous parking assistance system that steers the SUV into and out of parking spaces. A 360-degree surround-view camera system is also available.

Considering the Expedition’s size and the narrow lanes of Los Angeles freeways, the SUV’s lane-keeping technology was helpful without proving irritating. However, Ford does not offer a more-advanced driving system pairing the adaptive cruise control with lane-centering assistance. Given the company’s imminent rollout of its new BlueCruise technology, we’re betting the Expedition adds it as an option sooner than later. 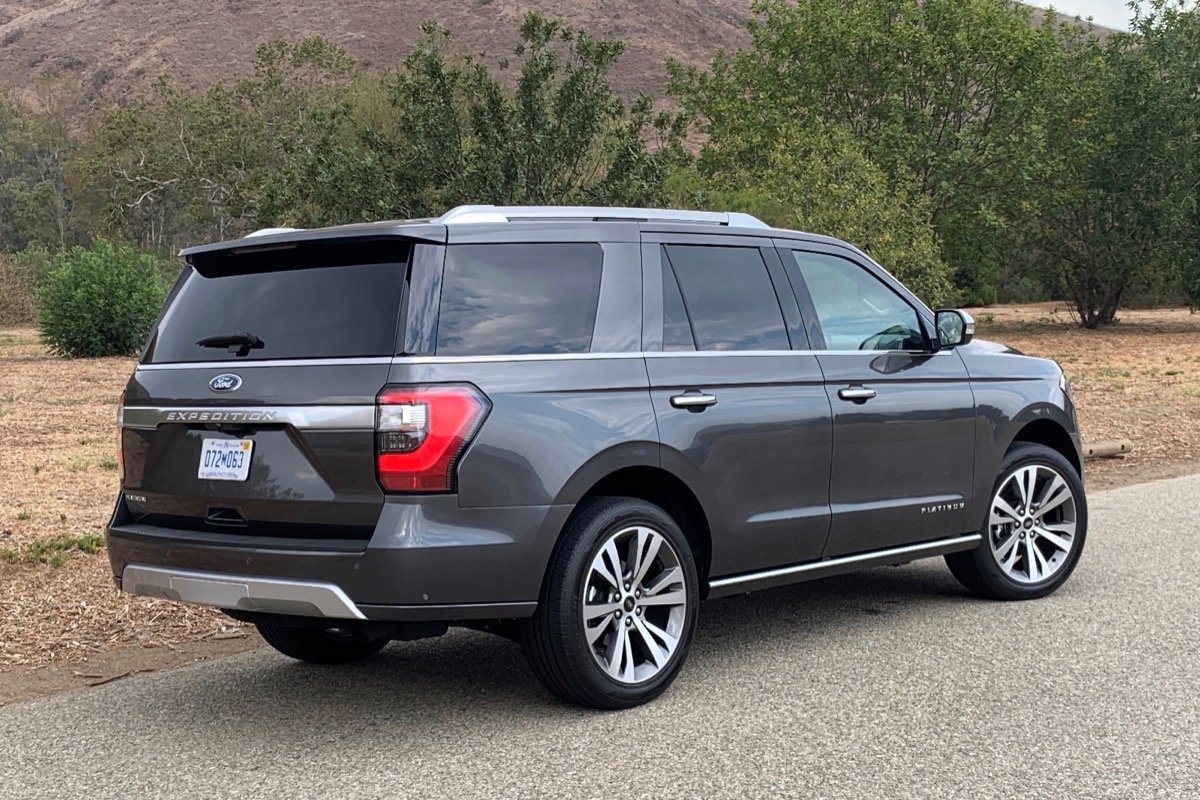 Full-size SUVs cost about $50,000 before you add any options or upgrade to higher trim levels. Plus, they typically consume plenty of gas, and the replacement cost for 22-inch tires isn’t cheap. In other words, they’re expensive to buy and to own. In turn, that means they’re cost-effective only when you use them for towing heavy trailers and hauling lots of cargo, lots of people, or both at the same time.

For lighter-duty lifestyles, a three-row crossover SUV or a minivan makes more sense. For what you’ll pay for a base-trim full-size SUV you can get a nicely equipped midsize crossover or minivan, and in most cases also enjoy a lower refueling bill and cheaper maintenance. Or, instead of dropping 80 grand on a loaded Ford, you could get a very nice Audi, BMW, or Mercedes-Benz.

In comparison to other full-size SUVs, the 2021 Ford Expedition makes a strong case for itself. It is more efficient than a Toyota Sequoia, roomier inside than a Nissan Armada, and a credible alternative to the redesigned Chevys and GMCs that are its primary rivals. However, if you buy a Tahoe, Suburban, or Yukon equipped with the surprisingly affordable Duramax diesel engine, the Expedition can’t come close to matching the GM trio when it comes to fuel efficiency.

What's your take on the 2021 Ford Expedition?

Susan Wowxa ! Theyre Sure Exspensive As All Get Out ! ? Sadly Id Loved One But Cannot Afford To Even Look At Them .

Have you driven a 2021 Ford Expedition?
Rank This Car

Enter your zip to see incentives for a new Expedition in your area.