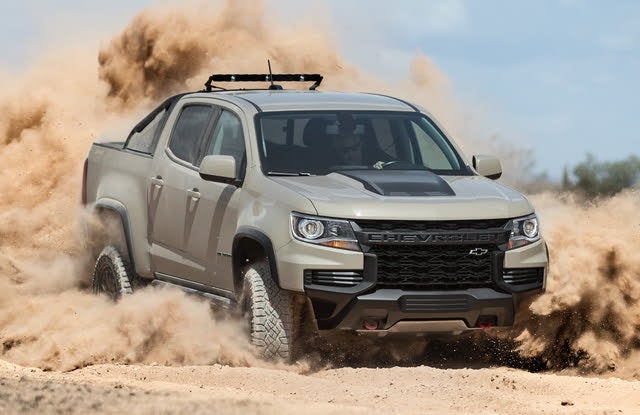 Looking for a New Chevrolet Colorado in your area?

Average user score
4.4 ⁄ 5 stars
Based on 13 reviews
Review by Guru9ZCWWL — great little truck, didnt get all the bells and whistles but enough. paid less than I would have for a used one with a lot of mile because of dealer promotions. I am very satisfied with how it all tur... Read more
Review by GuruPJSSJ — I really like the size of my new Colorado Z71. The biggest complaint is that it does not have Navigation, it has almost every other option and I find it strange that it doesnt come with it. It handl... Read more
Review by Sroy2 — Great value! All the necessary features, none of the fluff. Rides great and gets really decent gas milage. Different trim levels that will allow you to get the features that you want. Read more

For many truck shoppers, a full-size pickup is overkill. Be it their massive size or thirsty engines, larger pickups do have downsides. Midsize pickups resolve them by offering plenty of versatility but in a more nimble package that's optimized for cities and tight spaces. For 2021, Chevrolet has updated its most rugged midsize truck for even more capability.

While the full-size Silverado has a more aggressive (and some say “polarizing”) appearance, the Colorado has a far more conventional look. For 2021, the Colorado does receive some design tweaks to bring it more in line with its larger sibling. In back, the rear bumper features helpful corner bed steps, allowing the user to easily step up into the bed without a more complicated (and potentially breakable) retracting bed-step system.

The Chevrolet Colorado is available with an extended cab, with a small second row and clamshell half-doors, and then there’s the full 4-door crew cab. The bed options are a 6-foot-2-inch-long bed or a 5-foot-2-inch-long bed. The extended cab gets paired with only the longer bed, while the crew cab can be had with either the short bed or the long bed.

The Colorado has a function-first cabin with easy-to-reach buttons and dials, plenty of trays and cubbies, and a simple controls layout. All your gear and personal items can fit into the large door bins and deep center console.

The 2021 Colorado comes standard with the Chevrolet Infotainment 3 system, complete with a standard 7-inch touchscreen, Apple CarPlay, and Android Auto. Like the rest of the interior, the Infotainment 3 system features a straightforward layout. It has large, easy-to-read fonts and icons and can be worked with gloves on. You can also customize the screen simply by “dragging” an icon with your finger. This system comes standard with two USB ports.

Trims for the 2021 Colorado are Base, Work Truck or WT, LT, Z71, and ZR2. The Base is available only with the extended cab, long bed, and rear-wheel drive (RWD), and it's pretty spartan. It even lacks second-row seats. It does have the Infotainment 3 system, as well as six speakers and Bluetooth hands-free calling.

The Work Truck adds rear seats to the extended cab as well as some under-seat storage. It also makes options available, including the V6 engine. If you want anything more than that, look up to the LT trim. It brings more creature comforts, such as a larger 8-inch touchscreen, more USB ports, satellite radio, HD Radio, and even a WiFi hotspot. The LT also comes with the EZ Lift & Lower tailgate, which slows the drop speed of the tailgate, thus preserving it over the long haul.

The Colorado is also available in the rugged ZR2 trim, offering even more aggressive wheels and suspension as well as underbody skid plates and unique aggressive bodywork. All that talk about “conventional” design goes out the window with the ZR2, as it more closely emulates the brash grille styling of the Silverado. This look gets accentuated with black wheels and red tow hooks.

Power gets sent to the rear wheels or available four-wheel drive (4WD). The V6 routes that power through an 8-speed automatic transmission, while the gas and diesel 4-cylinder engines route power through a 6-speed automatic transmission. When properly equipped, the diesel-equipped Colorado can tow up to 7,700 pounds, which is among the best capacities in the midsize truck class.

The Colorado comes with standard safety features such as a backup camera, traction control, tire pressure monitoring system, and a full array of front and side-impact airbags. Other standard safety features include the clever Tire Fill Alert and the Teen Driver system. The Colorado is available with forward-collision avoidance, lane-departure warning, and rear parking sensors. These features all make the Colorado as safe and sensible as it is rugged and capable.

What's your take on the 2021 Chevrolet Colorado?

Sroy2 Liked it enough to buy one.

Have you driven a 2021 Chevrolet Colorado?
Rank This Car

Enter your zip to see incentives for a new Colorado in your area.

Vacuum line from power brake booster vacuum pump became disconnected at the other end (still connected to the pump). Where does the other end connect to?

Do You Offer Leasing Options?

Any New Prices ???on Colorado

I Am Pre Qualified From Capital One Whats My Rate And How Much Is The Limit...