The country’s most popular midsize pickup truck gets minor changes for 2020. 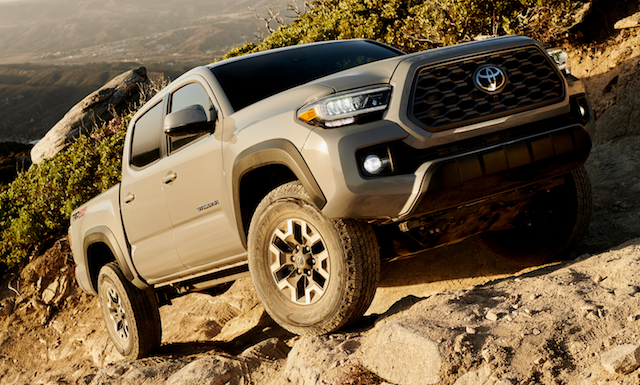 Growing up in the post–Marty McFly era, I saw small Toyota pickups everywhere in America. When the American automakers abandoned this market in the late 2000s, Toyota kept on trucking. The Tacoma remains the best-selling midsize truck in the US—it's more popular than the Chevrolet Colorado, GMC Canyon, and Nissan Frontier combined. The Ford Ranger isn’t a threat, either. Nearly a quarter-million people purchased a Tacoma last year, a vehicle that by any measure is loud, slow, and defiantly old-fashioned. It’s the capability, size, and dependable off-road features that keep Tacoma buyers satisfied. For 2020, it gets few but important design and technology updates to push this rough-and-tumble pickup into modern times. 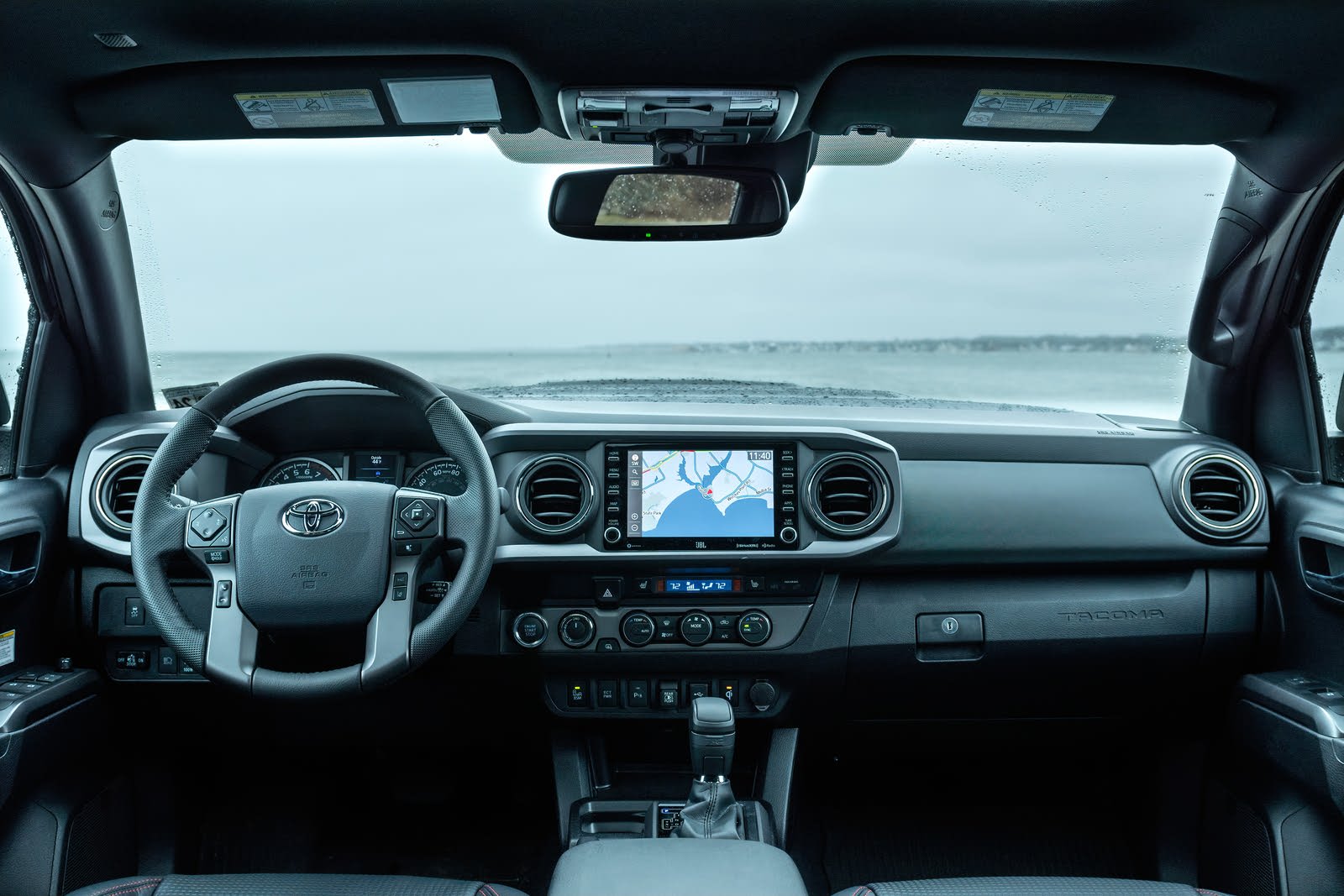 While it won’t win a beauty contest—only the full-size Ram 1500 can do that among pickups—the Tacoma is clean, pure, and simple. Major demerits: The back doors still have that tinny sound of old Toyota trucks, and the flared hood scoop is fake—no air passes through to the engine intake. Viewed from behind the windshield, the bulge is a masculinity prop that indulged my alter ego of a mud-slinging man on the job. I took the Tacoma to yoga class. What else can you do after hours in the suburbs?

The body, in either extended Access or four-door Double Cab form, is rounded enough to feel like it’s not a Jeep but still coated with enough upright lines and chiseled panels to remind viewers this is not some cushy Highlander. It’s big without feeling bulky. With most Tacoma models, you choose efficiency over embellishments. The Limited trim has 18-inch wheels, and that’s about as glitzy as it gets.

Not so with the TRD Pro I drove. For 2020, Toyota redesigned the LED headlights so they light up with “TRD” on the left, “PRO” on the right, and sequential turn signals on both sides. Also new for 2020 on the TRD Pro is Army Green, a gorgeous flat paint everyone should buy. With the new grille—chunkier than ever, the TRD models swap the “T” circular badge for the classic “TOYOTA” printed in all caps—the Tacoma is ready to pounce. An aluminum skid plate with a red TRD logo and exposed red shocks from Fox Racing, not to mention the 16-inch black TRD wheels and all-terrain tires, announce the TRD Pro’s intent as a curb-hopper in the city and a backwoods champ on the trail. With the TRD fender badge and polished black exhaust tip, I felt ready to attack moguls, crawl, and do all the outdoorsy things that I don’t ever do. That’s a psychological effect of good design.

The interior carries the same straightforward look as the exterior, with long rectangular planes forming the upright dash and a modestly sized touchscreen surrounded by toggle switches, buttons, and chunky knobs. Other models, like the Tacoma we tested in 2016, have orange trim that brightens up the all-black interior. I’d have preferred that style, along with cloth seats. The TRD Pro’s leather isn’t up to snuff, so why bother? Fit and finish are good—way better than in the Ford Ranger or Nissan Frontier, but the materials themselves are mostly bargain plastics and rubbers. Sure, they’ll last, but a comfortable, rich interior is not what 50 grand buys in a specialized vehicle like this. I’d like a nicer cabin, but I doubt anyone buying a Tacoma really cares at all. 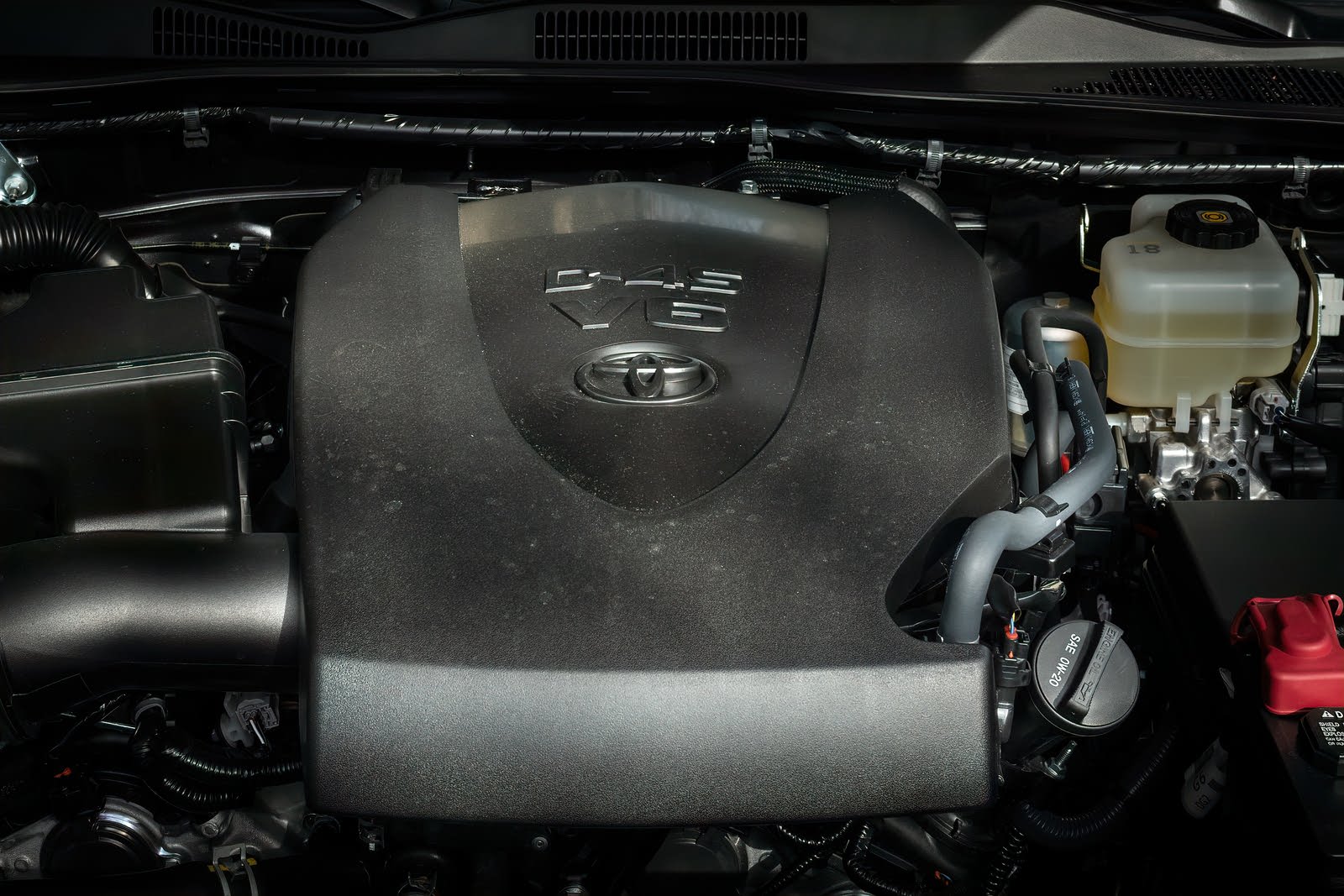 Skip the base 4-cylinder at all costs. The 2.7-liter engine ekes out 159 horsepower and 180 pound-feet of torque, a poor output by modern standards and worse when it’s asked to pull a vehicle this heavy. It’s available only in the base SR and SR5 models, and thankfully, the 3.5-liter V6 is optional on those trims and standard on all the rest. This engine, with direct injection and lazier Atkinson-cycle combustion (which Toyota uses on its hybrid engines), produces healthy figures of 278 hp and 265 lb-ft. A 6-speed automatic transmission and rear-wheel drive (RWD) are standard on every Tacoma except the TRD Pro, where 4-wheel drive (4WD) and the accompanying electronic low-range transfer case come standard. That combo is optional on all other Tacoma trims. A 6-speed manual is optional for TRD Off-Road and Pro models, plus it comes with a feature called Clutch Start Cancel that can restart the engine in first gear without the driver pressing the clutch. It’s useful in hairy off-road situations, say if you’ve stalled from loss of traction and you can’t afford to roll back an inch. It’s different than hill start assist, which also comes included, and will matter only if you’re the type of driver who wants the ultimate in control.

The manual forgoes two of Toyota’s cooler automated technologies, Multi-Terrain Select (MTS) and Crawl Control. MTS modulates the traction control, shifting, and throttle to suit one of five terrain-type settings (including moguls!), while Crawl Control acts as an ultra-low-speed cruise control that limits the driver's duties to steering. The truck will accelerate and brake to keep pace at five preset speeds, though on a steep, snowy hill on my test course, Crawl Control actually disabled itself because even the fastest speed was too slow to gain traction. These are interesting but not imperative features. They’re available only in 4-Low, and if you’re already in that low range, you really don’t need them. Plus, if you’re in a truly bad spot, the TRD models come with an electronic locking rear differential. That, plus 9.4 inches of ground clearance, incredible approach/departure angles, and a long-travel suspension, means it’ll be a challenge to get any Tacoma stuck, let alone the TRD versions.

On paved roads, the Tacoma acts like a dinosaur. The steering is slow and requires significantly more rotations on mildly curved roads. On-center feel is numb. The V6 engine labors through its six gears, and without pressing the “ECT PWR” button on the dash, it upshifts too early and downshifts on the slightest grade. Pressing that button lets the V6 rev higher through each gear—make sure to do so anytime you want to keep up with traffic. It’s also loud and drones on the highway. The TRD Pro has a sport exhaust that essentially leaves the muffler open at all times. It was fun for the first couple of miles, and then it became exhausting to hear. And I’m a guy who loves sport exhausts. I just couldn’t stomach listening to this one. Fuel economy is awful, at 20 mpg city, 23 highway, 21 combined for the inline-four and 18, 22, 20 for the V6, worse still for the manual. Many full-size V6 trucks perform just as well—or better.

Thankfully, the ride is supple and there’s no reason to stop for speed bumps. Plus, every Tacoma V6 can tow up to 6,800 pounds and carry a 1,440-pound payload. That, plus the super-capable 4WD and off-road hardware, is why you’ll pay at the pump. You’ll win on the trails. 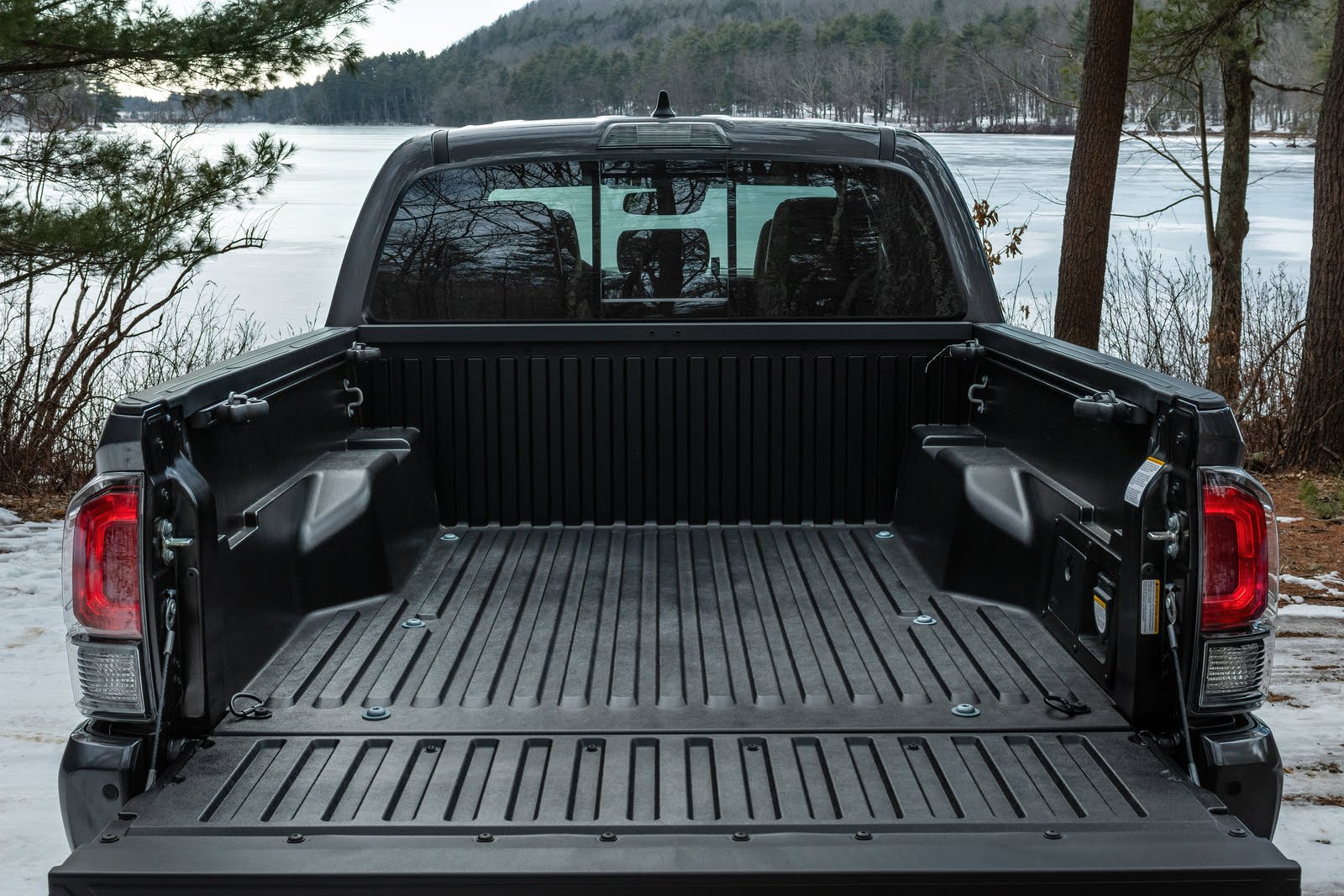 Being smaller than the Big Three's full-size trucks is the Tacoma’s biggest selling point. As a shorter, narrower pickup—though still way larger than what small trucks felt like in the 1990s—the Tacoma makes city life a breeze compared to the full-size beasts lugging through American streets. It’s easy to park, fits in normal home-size garages, and has a reasonable turning circle. It’s easier to place on wooded trails, too.

The bed, while shallow, has a rail system on the sides with four movable cleats to tie down cargo, plus it comes with an optional power outlet and LED lighting. Choose the Tacoma with either a 5- or 6-foot bed length (except the TRD Pro and Limited, which come only with the short bed). The Double Cab’s rear seats are fine for short trips but quickly feel cramped. The second row has a USB port but no air vents. Underneath those seats are hidden storage bins, but they offer no way to create a flat loading floor as the larger Nissan Titan does. Despite my truck’s power-sliding rear window, I was distressed by the lack of a rear defroster, which left my view blocked until the cabin reached the proper temperature. (Luckily, the heater is very quick and powerful.) I would have also appreciated a grab handle for the driver’s side, but even without one, it’s not difficult to throw a leg in the Tacoma—and if you’re going off-road, you won’t want the optional side steps. 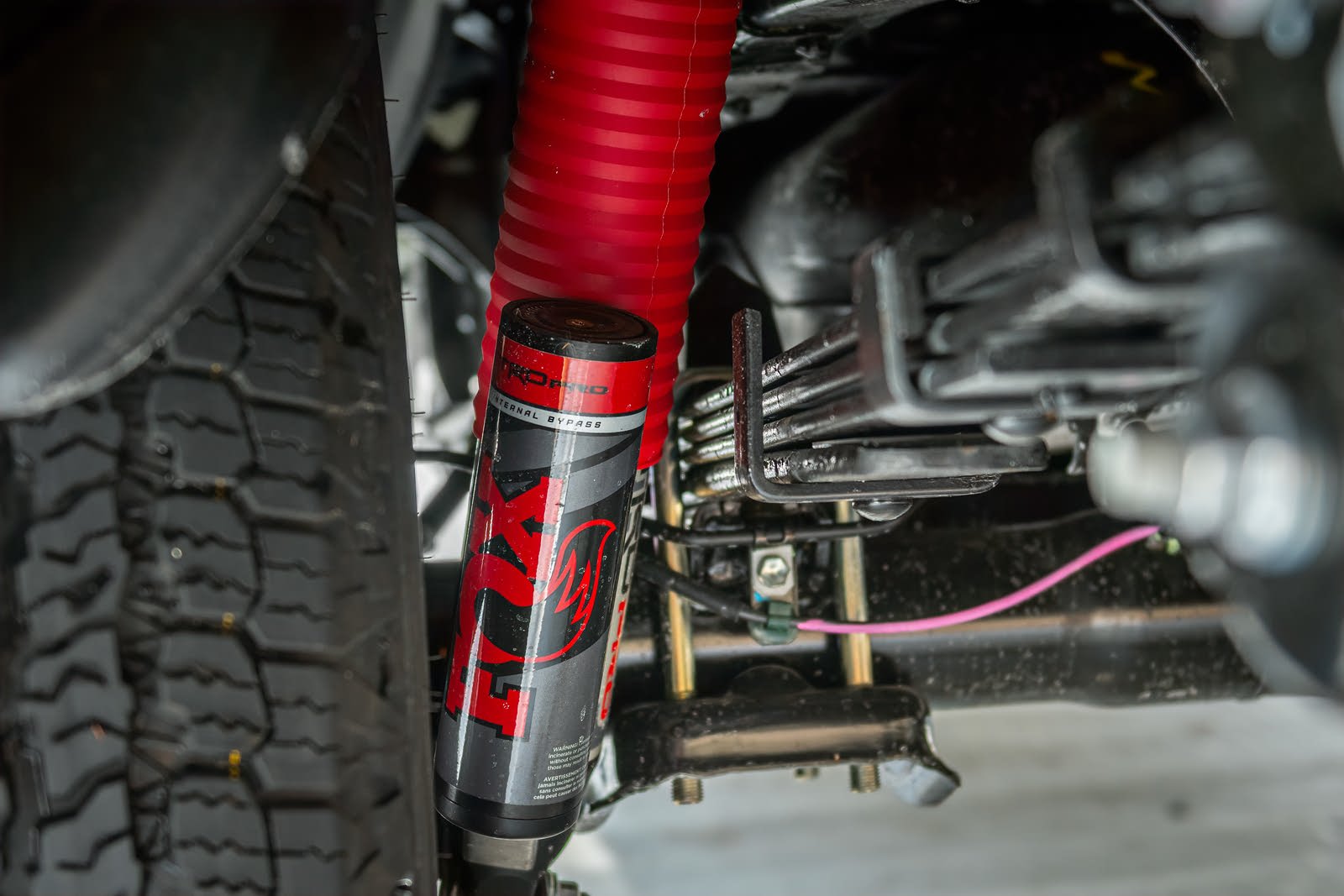 There’s no need to relearn anything inside the Tacoma. It’s simple and intuitive. A 7-inch touchscreen radio comes standard, while my truck had the 8-inch version with navigation, cloud-based traffic routes, and fast and accurate online searches via voice or keyboard. For 2020, Apple CarPlay, Android Auto, and Amazon Alexa come standard, as does the new USB-C port that I still can’t use with any of my devices just yet. Wireless phone charging and onboard Wi-Fi are available. But don’t think it’s totally modern: A proximity key with push-button start and an auto-dimming rear-view mirror are optional.

Equipped with 360-degree cameras, the Tacoma has hints of greatness. What it lacks in video quality it makes up for with ample views of the sides and front. The display switches between parking (activated by a switch on the console) and off-road views that stay on at low speeds in 4-Low, including a graphic showing the truck’s tilt angle.

Better still is a standard suite of driver assists including adaptive cruise control. Otherwise, you’re not going to find the best infotainment interface inside a Tacoma. It’s functional, fast, and easy. 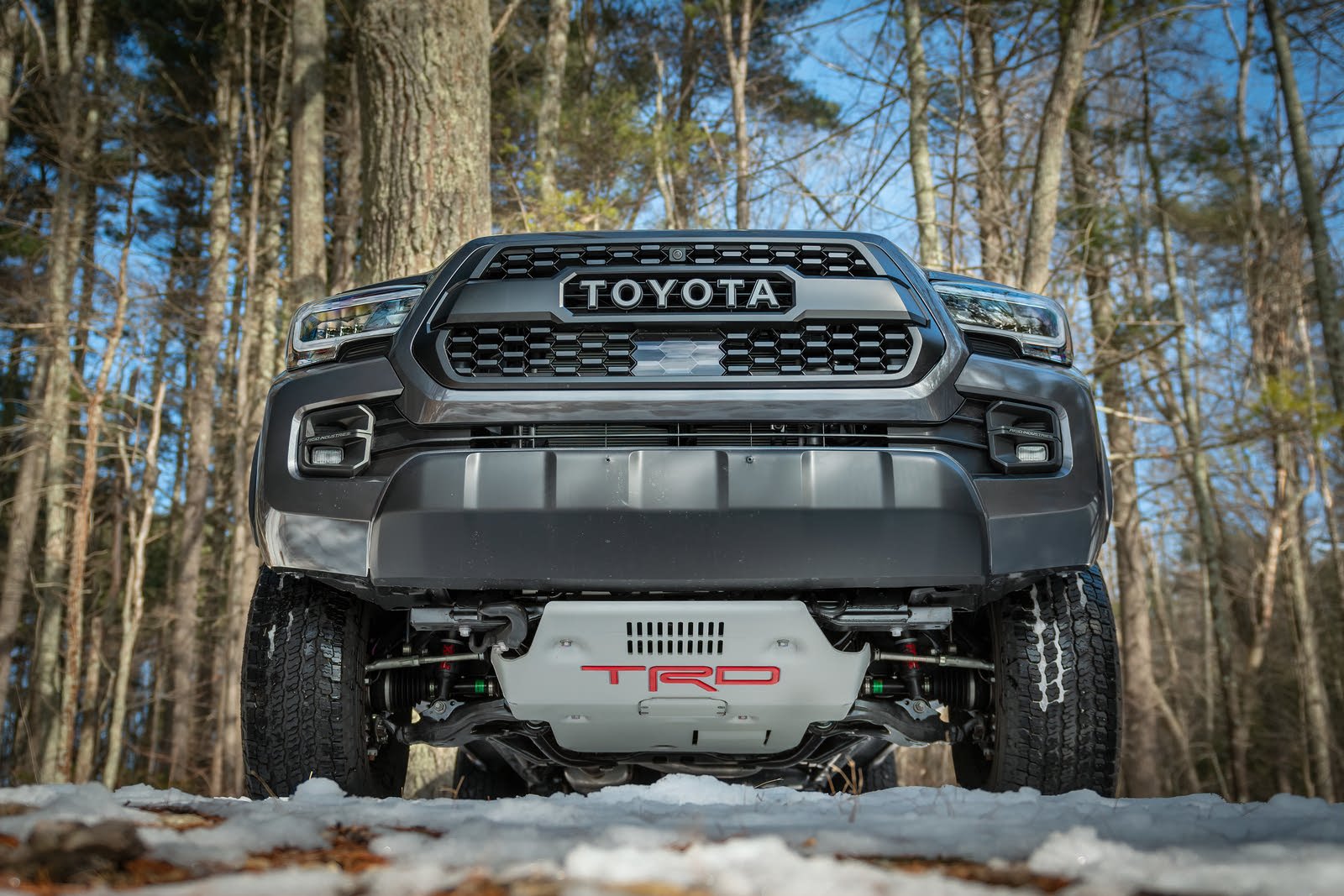 More safety features come standard on the Tacoma for 2020, including forward-emergency braking with pedestrian detection and lane-departure warning. Blind-spot monitoring and parking sensors are optional. The 2020 Tacoma scored 4 out of 5 stars in the National Highway Traffic Safety Administration (NHTSA) crash tests, with 4 stars for both front passengers in frontal tests and 4 stars for the front seats in side barrier and pole tests (rear passengers scored 5 stars). The Tacoma is also an IIHS Top Safety Pick, with the top Good ratings in five of six crash tests and a lower Acceptable rating for the front passenger in the small overlap test. 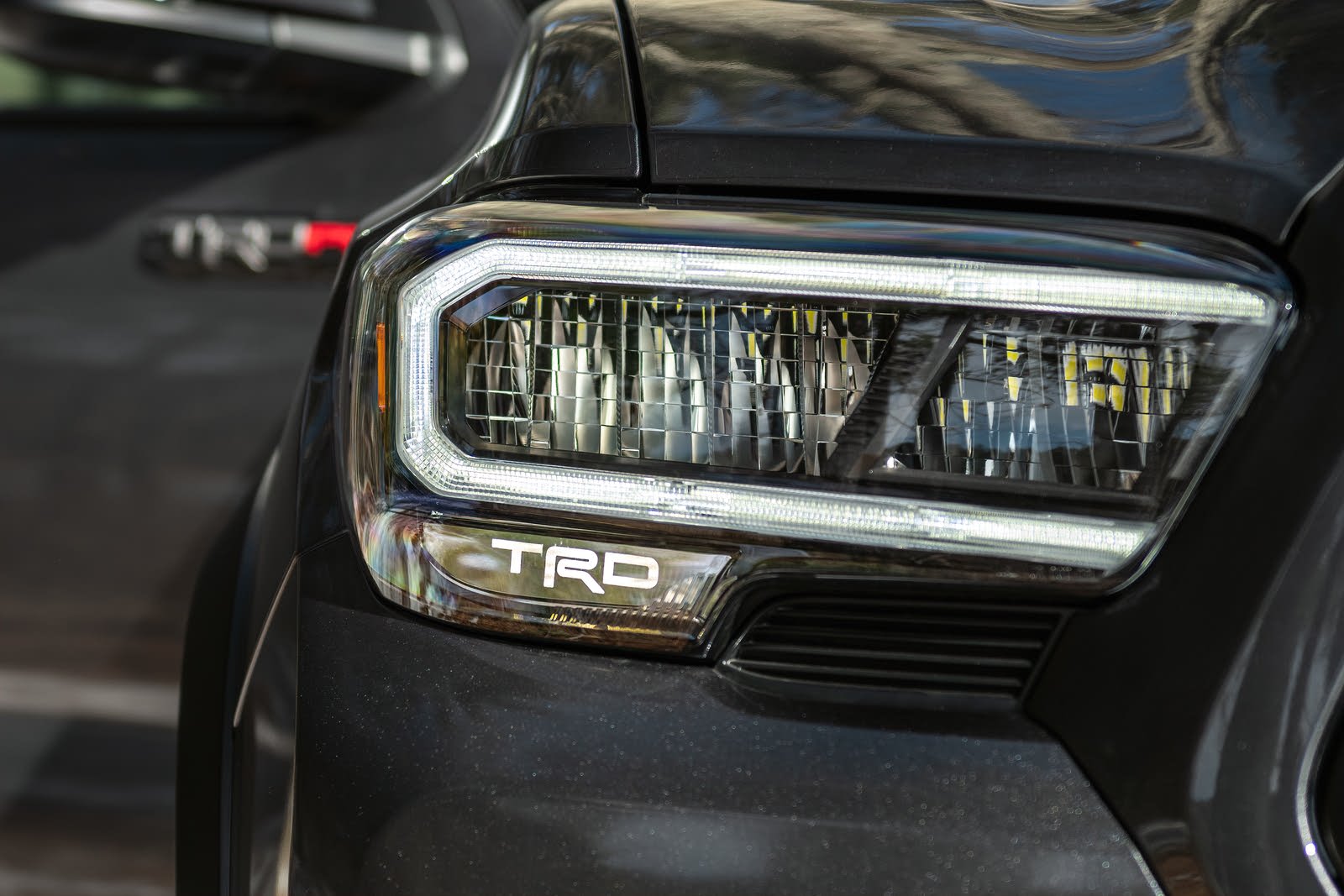 The 2020 Tacoma starts at $26,050 for an RWD Access Cab SR with the 4-cylinder engine. My TRD Pro test truck was fully loaded at just over $48,000 with destination fee. There’s a lot of room in between. CarGurus recommends the TRD Off-Road 4WD with the long bed, Technology Package (for blind-spot monitoring), and LED headlights for $39,925 with destination. If you require less capability, the TRD Sport is the way to go for several grand less. In any trim, the Tacoma stacks up well against the Ranger, Colorado, Canyon, and Frontier even though it could use more refinement and a better transmission. Serious off-roaders might consider a Jeep Gladiator. The Tacoma TRD Pro models, while pricey, hold their value on the used market.

Tyrone It's all good

GuruR361X it's a big truck, but the Toyota C-HR Small and wild these digital images as crazy, imaginary modification and far from the capabilities of the Toyota C-HR.

Have you driven a 2020 Toyota Tacoma?
Rank This Car

looking for a Toyota dealer that has tacoma trd sport w/ trim premium sports pkg in color super white with in 100 mi. of area code 01867

why won't the spare key I had made for my 2020 toyota tacoma start my truck. It opens the door and turns in the ignition but engine clunks when i try to start it.

What Is An M Package

What is an M package on a toyota tacoma TRD

which model has heated seats

42 views with 2 answers (last answer about a year ago)