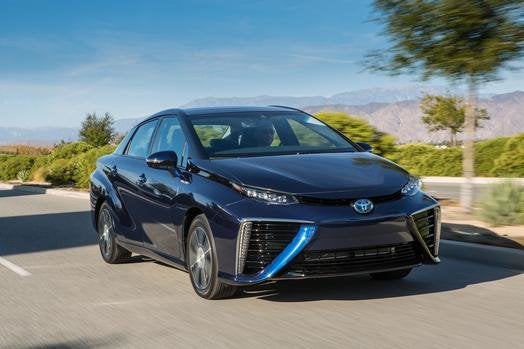 As hybrid and electric vehicles continue to grow in popularity, automakers are exploring other alternative fuel vehicles. Toyota has been leading the way, introducing the Toyota Mirai hydrogen fuel-cell vehicle for the 2014 model year.

Take a look at the Mirai, and it shouldn’t come as a surprise that it rides on the same platform as the Toyota Prius. Both are designed with aerodynamic efficiency in mind. This shape gives the Mirai 13 cubic feet of trunk space, which is slightly more than that of the rival Honda Clarity fuel-cell vehicle. It should be noted that the rear seats do not fold flat.

The Mirai is available in a single trim. It includes power-adjustable front seats, heated front seats, a heated steering wheel, and synthetic leather upholstery. The Mirai comes equipped with a Wi-Fi hot spot, USB connectivity, satellite radio, and an 11-speaker JBL premium stereo system. It also comes with a 7-inch touchscreen infotainment system with navigation, but it does not offer Apple CarPlay or Android Auto. It does come with Bluetooth connectivity with music streaming capability.

The Mirai’s zero-emissions hydrogen fuel cell powerplant generates 151 horsepower and 247 pound-feet of torque. Power is routed to the front wheels through a single-speed direct drive system. The EPA rates alternative-fuel vehicles with a mile-per-gallon equivalent. In these ratings, the Mirai earns 67 MPGe in both city and highway driving.

A key concern with hydrogen fuel cell cars is the safety of the tanks themselves. To that end, the Mirai’s two hydrogen fuel tanks are made from a three-layer carbon-fiber-reinforced plastic construction. These are designed to withstand a hard impact. There are also hydrogen sensors throughout the Mirai to indicate any potential hydrogen leaks.

Have you driven a 2020 Toyota Mirai?
Rank This Car