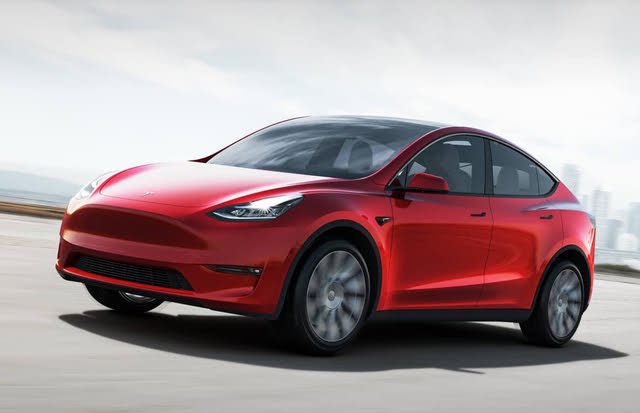 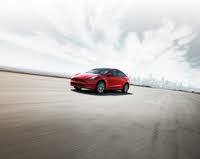 Looking for a Used Model Y in your area?

Tesla’s Model Y is a compact crossover that’s smaller than the Tesla Model X SUV. Although exact dimensions aren’t yet available, Tesla says the Model Y will offer 68 cubic feet of total cargo space (with the rear seats folded), which is more cargo space than the BMW X3 and Mercedes-Benz GLC-Class provide. Starting in 2021 it will offer an optional third row with seating for up to seven passengers, something you’ll not find in most luxury competitors this size. Pre-ordered deliveries are set to begin in March of 2020, according to Tesla.

At launch two versions—Performance and Long Range—will be available, though a Standard Range trim is expected by early 2021. Both trims come standard with Tesla’s dual-motor all-wheel drive (AWD) and, somewhat ironically, provide an identical 315-mile EPA-estimated range. It’s been rumored that a rear-wheel-drive (RWD) version will appear, and if it does, it seems likely that it will be available as a Standard Range model. At its supercharging stations, which Model Y owners will have to pay to use, the ute can replenish 158 miles of range in only 15 minutes, according to Tesla. The EPA rates the Model Y at 121 miles-per-gallon equivalent.

Like most Teslas, the Model Y's acceleration is outrageous. Tesla claims the Performance trim will hit 60 mph in only 3.5 seconds, while the Long Range version requires 4.8.

Inside, the Model Y is uncluttered and button-free, like the Model 3. Every Model Y comes with a massive sunroof that Tesla says increases headroom. Its dash is dominated by a 15-inch horizontally oriented touchscreen, and the overall design feels simple and elegant. Options are minimal but include upgrades to either 20- or 21-inch wheels (19-inch wheels are standard), the seven-seat option, and Autopilot, Tesla’s advanced driver-assist system.

Tesla’s Autopilot system can accommodate automated driving on freeways between on- and off-ramps, according to the company. All Teslas come with the hardware for full self-driving capability on surface streets, but enabling it is a $7,000 option. Expect the system to be subject to limitations of both hardware and good judgment.

Long Range trims start at about $53,000, which is about $10,000 more than the starting price of a BMW X3 and Mercedes-Benz GLC. So you’ll pay more for a Model Y than for a comparable gasoline-powered luxury crossover, but neither of those SUVs provides a glimpse into the future like the Model Y.

Have you driven a 2020 Tesla Model Y?
Rank This Car

Looking for a Used Model Y in your area?

How Does One Search For Cars For Sale From Individual Sellers?