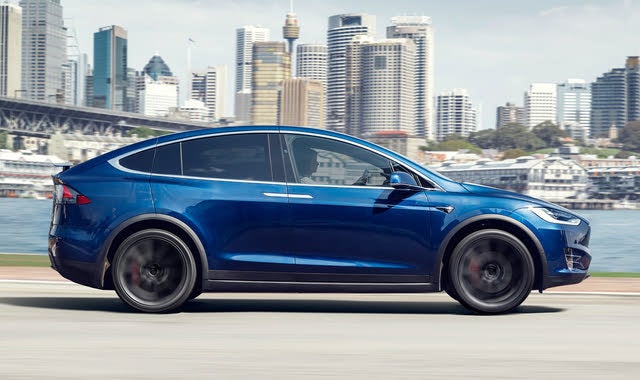 With seating configurations for five, six, or seven passengers and the ability to tow up to 5,000 pounds, Tesla built a practical, if costly, SUV with its Model X. The company did a lot of thinking about how people use SUVs when it designed the Model X, and its packaging—batteries in the floor, one motor driving each axle—seems ready-made for that application.

Tesla says only two trims are available, but the EPA insists Tesla still sells two others for 2020. The Long-Range and Performance trims get 328- and 305-mile range estimates, respectively, while the Standard Range trim, according to the EPA, is estimated to offer a 258-mile range. Tesla's site references a Long Range Plus version it claims the EPA rates at 351 miles of range. Tesla claims its supercharger network can replenish 123 miles of range in 15 minutes in the Model X, though home charging will be at a much lower rate. All Model Xs come with free supercharging on the company’s nationwide network.

Despite its SUV-like passenger and towing credentials, the Model X is still ultra quick. The Long Range Plus trim will hit 60 mph in an estimated 4.4 seconds, while the Performance trim reaches the same milestone in 2.7 seconds, according to Tesla. That every Model X has all-wheel drive (AWD) helps its acceleration.

One of the Model X’s most unique identifying features is its “falcon wing” second-row doors, which are hinged in the middle of the roof and rise vertically while folding. They look fantastic, but low-vertical-clearance situations can make rear-seat ingress and egress a hassle. Also, forget about using a roof rack. But the Model X is more pragmatic inside, where, depending on its seating configuration, the second and third rows fold flat, providing up to 88 cubic feet of storage. And there’s a front trunk as well.

Like the Model 3 and Model S, the Model X uses a large touchscreen for most secondary controls and infotainment functions. In this case, it’s a vertically oriented 17-inch display. All seats and the steering wheel are heated, and instead of a glass roof like the sedans offer, the Model X’s windshield extends rearward nearly to the front passengers’ heads, creating a panoramic effect. Inside, the Model X truly feels unlike any other vehicle.

It is also available with Tesla’s driver-assist Autopilot feature, which Tesla claims will handle automated driving on freeways between on- and off-ramps. According to the company, all Teslas come with the hardware for full self-driving capability on surface streets, but enabling it is a $7,000 option. Expect the system to be subject to limitations of both hardware and good judgment.

Even the shortest-range Model X offers more estimated range than the other all-electric SUVs, which aren’t yet abundant. Among its true luxury competitors for 2020, the Model X counts only the Audi e-tron and Jaguar I-Pace, though it will also face competition from plug-in hybrid versions of the Land Rover Range Rover and Bentley Bentayga.

Have you driven a 2020 Tesla Model X?
Rank This Car