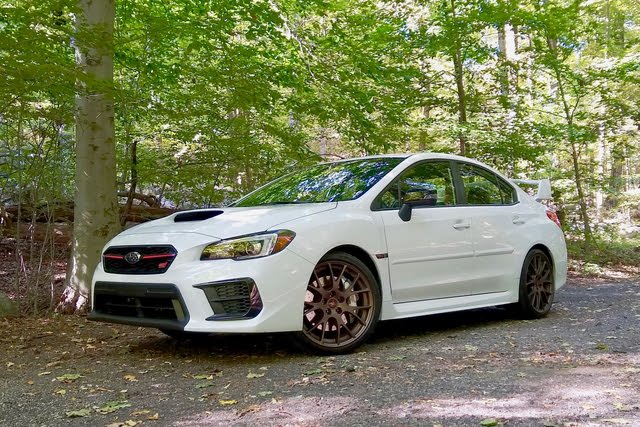 Looking for a New Subaru WRX STI in your area?

Average user score
5 ⁄ 5 stars
Based on 3 reviews
Review by Guru9DNRJV — Overall great car. Differential control feature really brings the car to life. Fun car to go on a cruise on a sunny day. The only thing about this car is it’s got summer tires on it, would be nice to ... Read more
Review by Glenngualberto — I love my new experience with this car, I drive different kind of cars but this one makes me fall inlove. Read more
Review by dmatos22 — This car is great and. I’m glad I. Got. It Read more 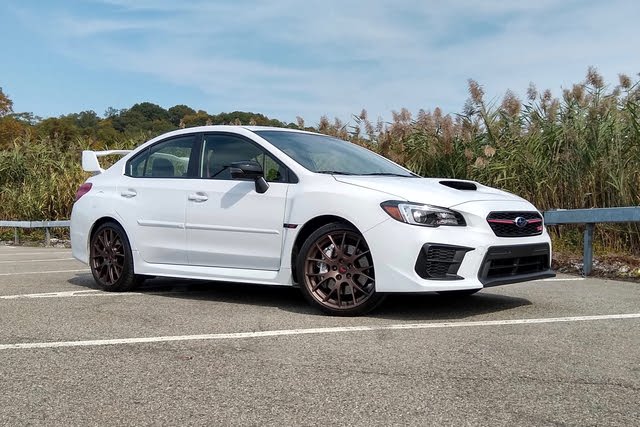 The Subaru WRX STI powerslid into the United States for the 2004 model year, sporting a turbocharged engine and a massive rear wing, and ready to take on the Mitsubishi Lancer Evolution. The STI and Evo defined a new type of performance car, offering more power than typical sport compacts of the era, along with rally-inspired tech and all-wheel drive.

A lot has changed since the STI first came to the U.S. The World Rally Championship battle between Subaru and Mitsubishi that birthed the STI and Evo ended years ago, and the Evo is gone. That doesn’t mean the STI is without competition, though; the Honda Civic Type R, Hyundai Veloster N, and Volkswagen Golf R offer similar performance.

The STI hasn’t changed much, however. It’s still a higher-performance version of the Subaru WRX, still has the big rear wing, and uses an updated version of the turbo engine from that original 2004 model. That means the STI can no longer claim to be a technology leader but, as a recent test drive showed, it remains a compelling performance car. 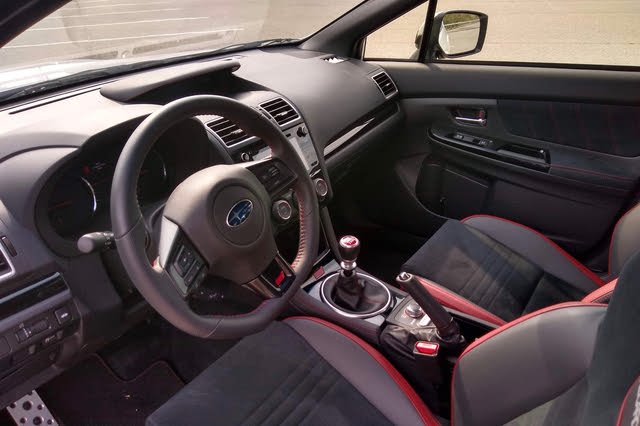 Like the base WRX, the STI (short for Subaru Tecnica International, the automaker’s performance division), is based on the Subaru Impreza compact sedan. However, the WRX and WRX STI still use the previous-generation Impreza platform. Because the performance models were introduced fairly late in the old Impreza’s life cycle, they haven’t migrated to the Subaru Global Platform used by the Impreza since the 2017 model year.

The basic compact-sedan bodyshell gets a thorough styling makeover. The hood, fenders, doors, quarter panels, bumpers, headlights, and taillights are all unique to the STI. The car sports box flares that have been a WRX and STI trademark since the early 2000s, and also help make room for wider tires. The hood is aluminum and has a functional scoop that feeds air into a top-mounted intercooler. The entire front end of the car is also different, with narrower headlights and a more pointed front fascia, giving the STI an intimidating scowl.

The boy-racer costume continues at the back, with quad exhaust tips, a rear diffuser, and the aforementioned big wing. It’s actually so tall that the top plane is about level with the top of the rear window, so it doesn’t impair visibility much.

Our test car was a Series.White limited edition, which is exclusive to the 2020 model year, with production capped at 500 units. The Series.White gets model-specific Ceramic White paint, matte bronze BBS 19-inch wheels, silver brake calipers, Crystal Black Silica exterior mirrors and side badging matte black rear badging, and a model-specific grille. Some performance upgrades are included as well (see the “Performance” section below).

The interior is still recognizably last-generation Impreza, meaning it’s fairly Spartan, but likely to hold up to long-term abuse. The STI tries to jazz things up a bit with a model-specific gauge cluster and Fast and Furious-style metallic pedal covers, and a flat-bottom steering wheel. Our Series.White test car also had Recaro front seats (with eight-way power adjustment for the driver) and Ultrasuede upholstery with Carbon Black leather bolsters.

Some shoppers may see the STI’s sticker price and expect a more luxurious interior, but it works fine for this car’s intended purpose—making driving fun. 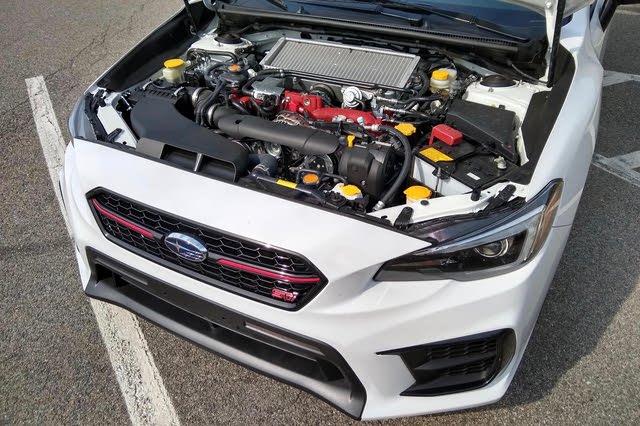 Like all Subarus, the STI uses a boxer engine, which sits low in the chassis, helping to lower the car’s center of gravity. The 2.5-liter turbocharged boxer-four produces 310 horsepower and 290 pound-feet of torque. While the base WRX (which uses a less-powerful 2.0-liter engine) gets an optional continuously-variable transmission (CVT), the STI is available only with a six-speed manual.

The STI also boasts a sophisticated all-wheel drive (AWD) system. It includes torque vectoring, which shunts power side to side to help point the car into corners, as well as Subaru’s Multi-Mode Driver Controlled Center Differential (DCCD). This allows the driver to control front-to-rear torque split by adjusting the center limited-slip differential.

The default split is 41/59 front/rear, but the system will automatically vary that split depending on factors like steering angle, throttle position, and engine rpm in Auto mode. An Auto- mode opens up the center differential, sending more power to the rear wheels, while Auto+ tightens the differential for driving on loose surfaces like gravel or snow, according to Subaru. A manual mode includes six levels of differential locking, for a greater degree of fine-tuning beyond the three Auto modes.

While DCCD manages the AWD system, Subaru Intelligent Drive (SI-Drive) manages the engine. SI-Drive includes three modes—Sport, Sport Sharp, and Intelligent—activated by a dial on the center console. Each changes the throttle response, with Intelligent the most relaxed and Sport Sharp the most aggressive. However, we didn’t notice a dramatic difference between the different modes. It’s also worth noting that other automakers offer drive modes that affect more than just throttle response.

Those Cup 2 tires could make a minivan handle well, so it’s no surprise that they offered ample levels of grip. They also have a tendency to tramline on uneven pavement, however, making the steering wheel disconcertingly twitchy. The sport-tuned suspension provided a reasonably comfortable ride and good body control, but we still would have preferred a little more give. The suspension is so firm that the car often bounced over rough sections of pavement like a Conestoga Wagon on the Oregon Trail.

The Series.White upgrades enhance what was already a very good driver’s car. With DCCD and SI-Drive in their default settings, the STI felt admirably neutral. It was eager to turn in, and the torque-vectoring feature provided just enough rotation to get the car pointed into corners without descending into full-on oversteer. If sideways action is your thing, that can be arranged by selecting a rearward torque bias for the DCCD, and turning the traction control off.

Minor blemishes included the steering, which was very communicative but could have still used a bit more precision, and the shifter. With its vague action and heavy throws, it didn’t feel worthy of a performance car. However, with so few manual transmission available these days, it’s probably best not to look a gift horse in the mouth. 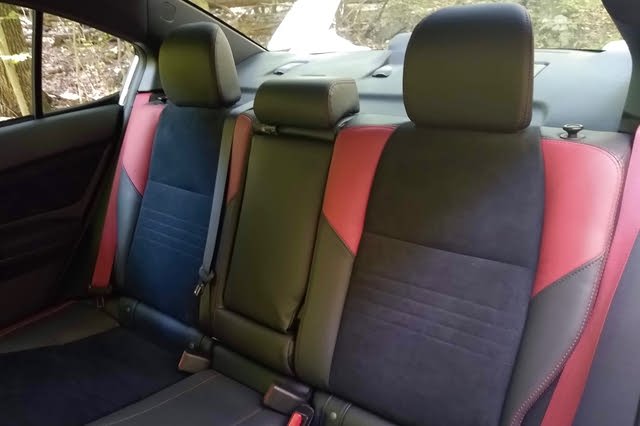 It may be bristling with performance hardware, but the STI is still based on an ordinary compact sedan, so it’s fairly practical too.

Your passengers may not enjoy the stiffly-sprung ride, but they’ll at least get a decent amount of headroom and legroom. Unlike sporty coupes such as the Ford Mustang, rear-seat passengers also don’t have to climb over anything to get in and out.

While passenger space is fairly close to rivals like the Honda Civic Type R and Volkswagen Golf R, those two hatchbacks have an advantage in cargo space. Subaru used to offer an STI hatch, but the current version is only available as a sedan. Still, its 12.0 cubic feet of trunk space is respectable, and the rear seats fold down to hold longer items.

The STI’s Recaro front seats were comfortable enough for fairly long drives, with a good amount bolstering, but not so much that the driver feels constricted. Subaru included a small cubby hole at the base of the center console that looks like it can hold a phone, but in reality, is just a bit too small. It’s better to just throw it in one of the two cupholders on the center console, which are placed far enough back that won’t knock over drinks while shifting or changing drive modes. 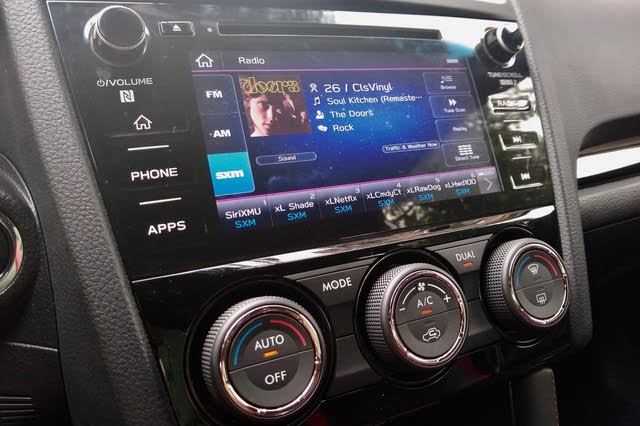 The touchscreen feels small, and menus are text-heavy, making them hard to read while driving. Luckily, analog controls handle most important functions, with three large knobs just below the touchscreen for climate control, and a volume knob in the upper-left corner of the screen.

Given that the STI is based on the previous-generation Impreza platform, it’s not surprising that the performance model lacks the latest tech. This is also a car focused on the connectivity between the driver and the road, not between the driver and their smartphone. Still, with touchscreens now de rigueur in new cars, the STI will need one that is easier to work with. 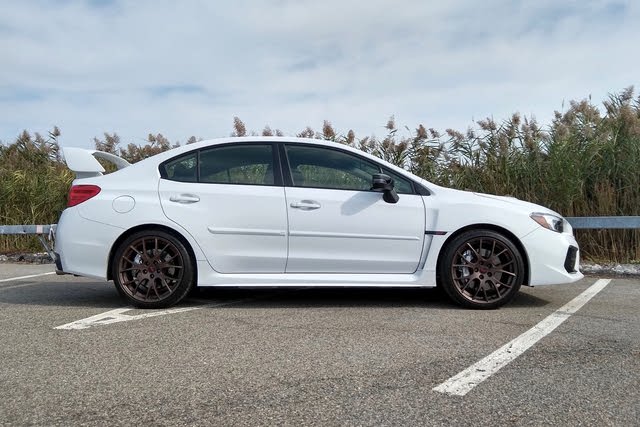 The STI received a five-star overall safety rating from the National Highway Traffic Safety Administration (NHTSA), with five stars in all crash tests except the driver’s side frontal test. The Insurance Institute for Highway Safety (IIHS) has only tested the base WRX, not the STI. That model received the highest “good” rating in all crash tests

However, the STI doesn’t get the EyeSight driver-assistance tech that earned the WRX a Top Safety Pick rating from the IIHS. That’s because EyeSight features—which include forward collision warning, automatic emergency braking, adaptive cruise control, and lane-keep assist—aren’t available on cars with manual transmissions. 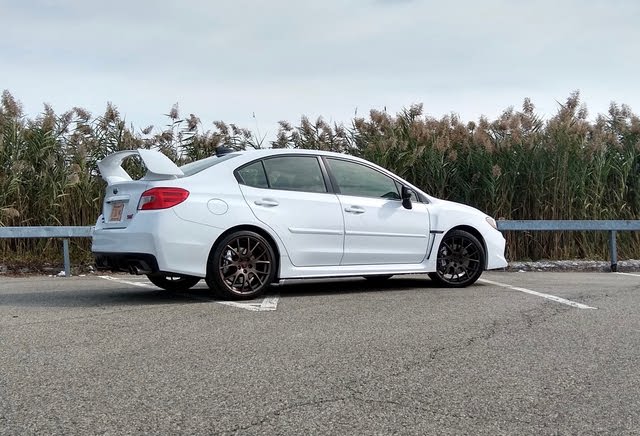 EPA fuel-economy ratings for the STI are 19 mpg combined (16 mpg city, 22 mpg highway). We managed 19.8 mpg over a week of driving, according to the car’s trip computer. That’s not bad for a sporty car with 310 hp, but the similarly-sporty Honda Civic Type R and Hyundai Veloster N both get 25 mpg combined in EPA testing. Note that the Honda and Hyundai are both front-wheel drive (FWD); the Subaru’s AWD might be worth the lower gas mileage if you live in a snowy region.

For similar money, the Civic Type R also gets adaptive suspension and a greater array of tech features than the STI. Depending on how you set its drive modes, the Honda can be just as rambunctious as the Subaru, but it can also be more refined in less-aggressive settings. Thanks to its rear hatch, the Type R has more cargo space than the STI, too.

The Veloster N can also use its drive modes to go from aggressive to tame, but its unusual three-door hatchback body style makes it less practical. The Veloster N is also down on power compared to the STI and Type R, with 275 hp. However, Hyundai’s 10-year/100,000-mile powertrain warranty and five-year/60,000-mile new-vehicle warranty surpass Subaru’s five-year/60,000-mile powertrain warranty and three-year/36,000-mile basic warranty.

The STI doesn’t have the technology to match its rivals, but that doesn’t detract from its performance capabilities, and how those capabilities are combined with four-door sedan practicality. Subaru’s sportiest sedan may still play the same tune it did in 2004, but that tune is a classic.

Stephen is a freelance automotive journalist living in New York state. He's obsessed with anything on four wheels, but particularly fond of his Subaru Impreza.

Have you driven a 2020 Subaru WRX STI?
Rank This Car

Enter your zip to see incentives for a new WRX STI in your area.