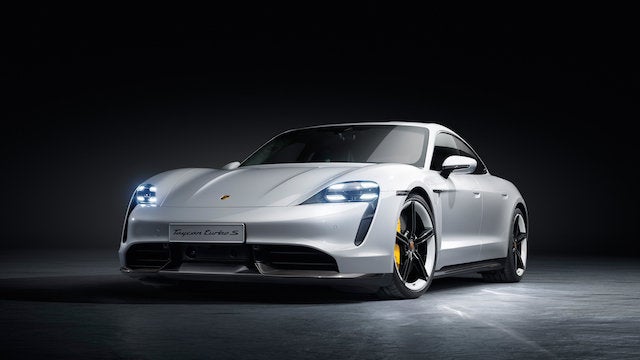 Looking for a Used Taycan in your area?

The Taycan is Porsche’s first-ever all-electric model. Now out for the 2020 model year, it’s taking aim at the likes of the Tesla Model S. Despite being an entirely new venture for the German carmaker, the Taycan lets you know that it's a Porsche. With a profile not unlike a Panamera and wide rear haunches not unlike a 911, it has all the right styling cues while still being distinct from the rest of the range. For now, the Taycan is available only in Turbo and Turbo S trims, but lower-tier trims will arrive soon.

Both the Taycan Turbo and Taycan Turbo S get two electric motors and a 93.4-kWh lithium-ion battery with 616 horsepower driving all four wheels. With Launch Control, both trims can push a little harder, with the Turbo making up to 670 hp and 626 pound-feet of torque and the Turbo S making 750 hp and 774 pound-feet of torque. Both are absolute rockets in a straight line, with the Taycan Turbo taking 3 seconds to get to 60 mph and the Turbo S taking just 2.6 seconds. As of this writing, the EPA hasn't released official fuel-economy numbers.

Drivers can select between Range, Normal, Sport, and Sport+ settings that tweak power output, the weight of the steering, and the stiffness of the suspension. Rear-wheel steering is standard, the staggered tires are sticky, and the brakes are massive at 16.5 inches with 10-piston calipers up front. Stepping up to the Taycan Turbo S adds carbon-ceramic brakes. Porsche’s active chassis system is an optional extra.

In addition to good looks and a Porsche badge, the Taycan stands out from Tesla with its interior. Porsche makes some of the best cockpits in the business, and the designers delivered yet again with this car. The thin-spoked steering wheel looks sporty, the open-pore wood and synthetic suede add a touch of class, and the multiple digital interfaces remind you that this car is cutting edge even while it’s sitting still.

There are three digital screens that come standard in the Taycan Turbo and Turbo S, while two more displays are optional extras. The instrument cluster is a 16.8-inch curved glass affair, while infotainment centers on a 10.9-inch touchscreen. An 8.4-inch touchscreen houses the controls for other functions like climate control. For an extra cost, the front passenger can have his or her own 10.9-inch infotainment touchscreen and rear passengers get a 5.4-inch touchscreen in the rear for their climate control settings. Options on the safety front include night-vision cameras, a surround-view camera, adaptive cruise control, and Porsche’s InnoDrive assist features. All Taycans get automatic emergency braking, active lane control, and parking sensors. Four adults will fit in the Taycan just fine, and storage space is good but not exceptional with 12.9 cubic feet in the rear trunk along with a small front trunk occupied mostly by the plug adapter.

The Tesla Model S is no longer the only show in town when it comes to high-end electric performance sedans. The Porsche has similar dimensions but less storage space, and speed is similar as well, with the Tesla Model S Performance hitting 60 mph in a fifth of a second quicker than the Taycan Turbo S.

What's your take on the 2020 Porsche Taycan?

Jim Cant wait to see one since the 911 is my favorite car.

Have you driven a 2020 Porsche Taycan?
Rank This Car

Looking for a Used Taycan in your area?

HOW IS THE PORSCHE TAYCAN DIFFERENT FROM THE PANAMERA

The car has been ordered and is being constructed by the factory. I want to offer it for sale before it arrives.