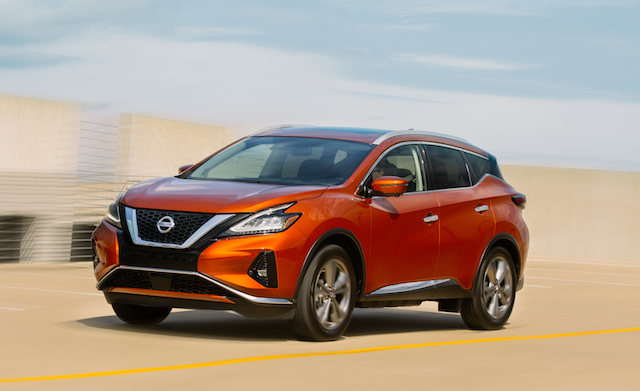 Looking for a New Nissan Murano in your area?

Average user score
4.8 ⁄ 5 stars
Based on 12 reviews
Review by Jeanie — I bought a 2020 Murano. I love it. I am very surprised at the gas mileage. Its averaging 28 to 30 miles per gallon and that is in the city. Its extremely comfortable. I would recommend this vehicle. Read more
Review by Guru9WYG9Q — Good value. Basically new. Didn’t buy this car because I have a Murano that’s the same colour. Purchased a new 2020 that was pearl white. Really enjoy the Murano. Read more
Review by Guru95LVWG — Very nice! Powerful 6 v6! I traded in a Sienna v6 I’m happy to have a Nissan for 20 years I was very loyal Toyota customer. Read more

Though aging in a rapidly evolving SUV landscape, the Nissan Murano offers the plush accommodations, strong engine, and safety features that buyers rank highly on their car-buying punch lists. 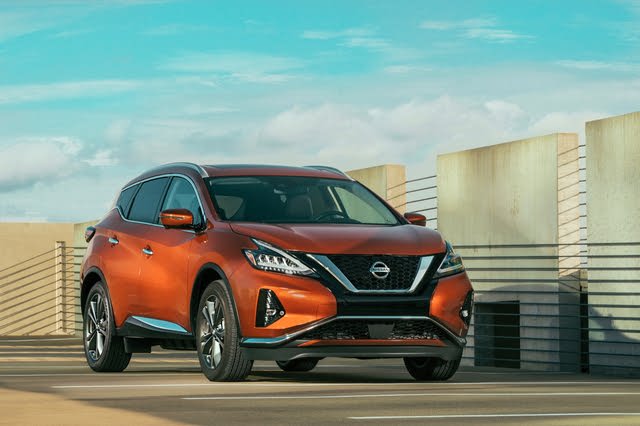 The 2020 Nissan Murano continues to offer buyers an upmarket alternative to the Nissan Rogue. The highlights of the Murano are numerous, but it also faces an uphill battle as its rapidly-aging generation faces new competition from models specifically designed for empty nesters like the Murano is. 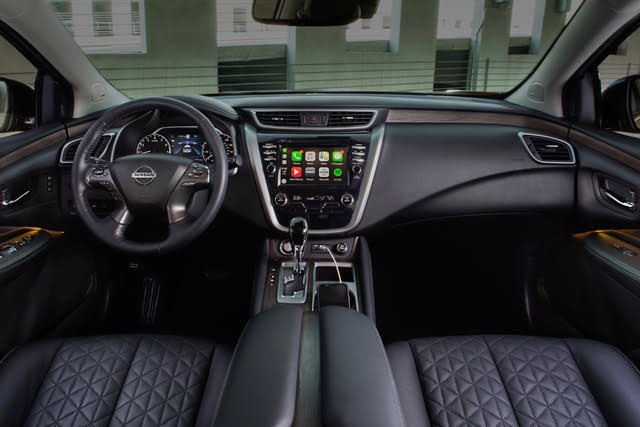 The 2020 Nissan Murano has the face of the last generation of Nissan products. While its styling was updated for the 2019 model year with a refreshed grille, redesigned LED headlights and taillights, added fog lights, new wheel designs, and additional paint color choices, the Murano’s exterior design remains attractive, just not particularly modern.

This will become glaringly apparent in the coming months as the redesigned Nissan Pathfinder and Armada debut, leaving the Murano as one of the only models without Nissan’s new looks.

Nissan sells the Murano in S, SV, SL, and Platinum grades for 2020. Midrange and higher trim levels have gotten an upgrade to include more standard features. Murano SV now has heated outside mirrors, adaptive cruise control, and rear sonar. The Murano SL builds on that and adds traffic-sign recognition technology. The top-tier Murano Platinum has a new leather-wrapped steering wheel. One new exterior paint option has been added—Super Black.

Like the Nissan Maxima, the Murano has premium appointments in its Platinum grade, as tested. The interior is a mixed bag with luxe materials but dated housings. This is especially true of the center stack, console, and steering wheel, much of which is stuck in the year the current generation Murano was new—2014.

Despite this, the Murano does still seem upscale, in some areas, compared to the most upmarket version of the 2021 Nissan Rogue. It also helps that, for the most part, switches, knobs, and buttons control what you expect them to and are located in places that make sense and are easy to reach. 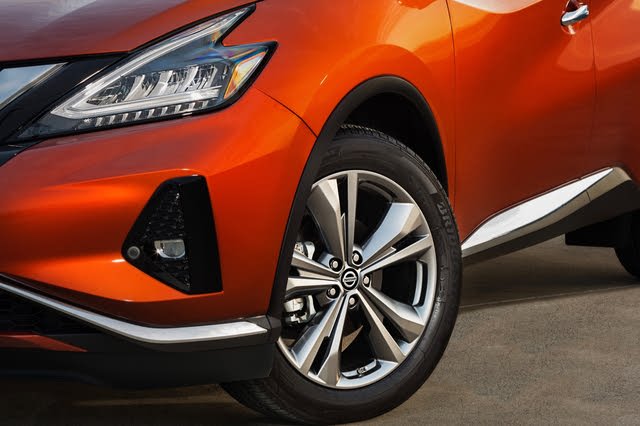 Despite its age, the Nissan Murano’s standard 3.5-liter V6 engine is a strong point. It delivers 260 horsepower and 240 pound-feet of torque. Though it’s not the quickest off the line, once up to speed on the highway the Murano has no trouble overtaking other vehicles.

The powertrain is completed by a continuously variable transmission (CVT) that acts rather quietly compared to other CVTs, especially from the Nissan family of vehicles. It’s a solid step toward what Nissan calls “library level” sound in the cabin of the car despite not featuring an eight- or nine-speed automatic transmission like so many competitors.

The Murano gets an EPA-estimated 20 mpg in the city, 28 mpg on the highway, and 23 mpg combined. Those numbers aren’t stellar but are on the high end for its class in vehicles without a hybrid engine option.

The Murano comes with a front-wheel-drive (FWD) drivetrain as standard and all-wheel drive (AWD) is available. When equipped with AWD, the Murano sticks to the road well, but can’t get over its tendency to pass on a substantial amount of body lean to the passengers.

Bumps and other harsh vibrations caused by the terrain the Murano is traversing aren’t felt as much in the cabin as in some other SUVs thanks to its four-wheel independent suspension.

The Murano doesn’t deliver the type of connected drive experience that you’d get from a premium German automaker’s SUV. Instead, it sits comfortably in the cruiser category where the Lincoln Nautilus is. While not particularly agile, nor sharp, operating the steering wheel in the Murano puts the car where the driver wants it without much fuss.

Nissan rates the Murano as having a 1,500-pound towing capacity. 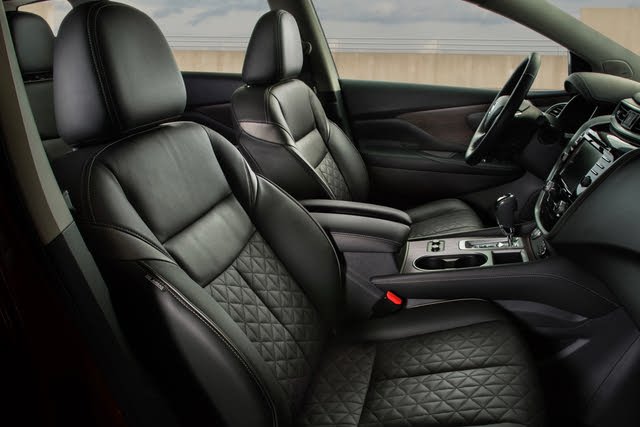 There’s no getting around that one of the Murano’s best features is its Zero Gravity seats. The cushions provide comfort for hundreds of miles and are roundly considered some of the best, if not the best, in the industry. They’re standard in the front row and for rear outboard passengers.

The Murano has more headroom than its close cross-shop, the Lexus RX, but it has far less front legroom. The Nissan midsize SUV wins when it comes to shoulder room where it offers passengers over an inch more than the RX in the second row.

Where the Murano’s passenger space is most differentiated in size from the 2021 Rogue is in hip and shoulder room, where the Murano bests the Rogue by over an inch. The two models maintain similar head- and legroom. These small differences are part of why the Murano has 3 cubic feet more passenger volume than the Rogue.

Though the Murano has less overall cargo space, and a little less than the class average, the SUV still has plenty of room for daily-driver usability. That's thanks in no small part to its low cargo floor and easy-to-fold rear seats, which makes storing purchases from the all-important Costco run a breeze. A power liftgate is standard in the Murano’s top two trim levels.

A dual-pane panoramic moonroof is standard on Nissan Murano Platinum models, available as part of a package on the Murano SL, and is a common feature found on many new crossover SUVs today.

The two-row SUV also benefits from easy ingress and egress and a comfortable seating position in all rows. However, the car’s A-pillar does detract from the car’s forward visibility. This is a problem in many SUVs, but nonetheless should not be overlooked here.

The age of the Murano’s center console catches up with it when it comes to practicality. There’s no good space to store a smartphone, though the rectangular small-item storage space next to the shifter or a cupholder will do in a pinch. This leaves charging cords hanging out as they connect at the front of the console. 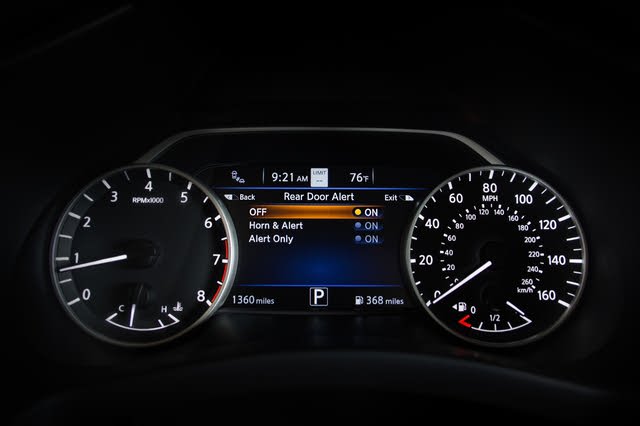 There’s no getting away from the fact that the Murano is behind its competitors when it comes to tech, but Nissan has done a good job upgrading to stay in the conversation. It also helps that the seasoned typical Murano buyer isn’t shopping for the model based on its tech level.

Each 2020 Murano comes standard with an 8-inch infotainment system touchscreen at the center of the dashboard that is easily accessed from both front seats. The SUV comes standard with Apple CarPlay and Android Auto compatibility as well as four USB ports, Bluetooth, satellite radio, a six-speaker audio system, and voice recognition. The updated Murano touchscreen lays out a user’s options in an attractive and colorful manner.

The two USB ports (one Type-A and one Type-C) in the rear seats allow passengers to charge on-the-go.

Murano Platinum buyers have NissanConnect Services capability included with their purchase. This service includes automatic collision notification, emergency call, and stolen vehicle locator, much in the same way that General Motors’ OnStar service works. It also has remote functionalities including start/stop, lock/unlock, flash lights, sound horn, and customizable alerts for valet mode, speeding, and dealership service. To activate some of the services, a SiriusXM contract is required.

Buyers can add an Amazon Alexa skill to their Murano free of charge. 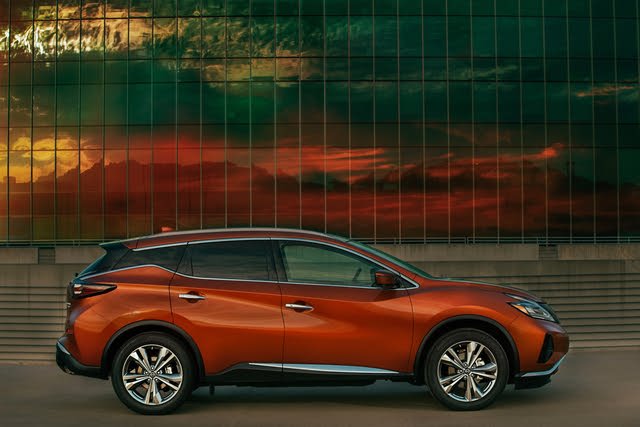 The Murano doesn’t have advanced driver-assist and safety technology like what you’ll find in rivals, or even in the Nissan Rogue. That model gets Nissan’s ProPilot Assist technology, which includes lane centering and other functionalities.

Insurance Institute for Highway Safety (IIHS) crash test results have the Murano earning all "good" ratings except in the headlight category where it was not rated and the front crash prevention test where it received a "superior" mark.

National Highway Traffic Safety Administration (NHTSA) safety ratings include all five-star marks for the Murano except in the rollover category where it is rated as four stars out of five. 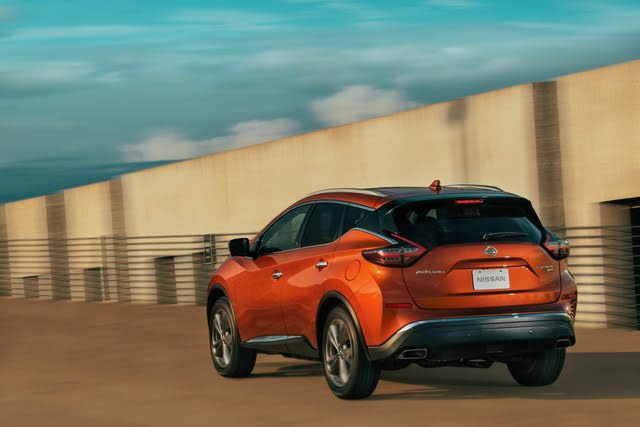 Crossing the high-$30,000 mark and getting into the mid-$40,000s is where the Murano begins to falter against its competition. As a plush, mid-grade SUV it is quite competitive but the higher price makes it ripe for comparison against engaging German SUVs and the excellent Acura RDX – a contest it doesn’t win.

If you want better fuel economy in a similar package, for a similar price, consider the new 2021 Toyota Venza. The slightly smaller Buck Encore GX delivers a similarly-cushioned ride but handles the road better and has fresh technology, all for a lower price. The Lexus RX is a higher-priced competitor but has excellent safety and reliability ratings.

There's also the Honda Passport to consider as well as models from Hyundai including the Tucson and Santa Fe. The more rugged Passport isn't nearly as comfortable as the Murano, but it has an equally-strong engine, gobs of small-item storage up front, and good predicted reliability. Hyundai makes a strong case with both of its two-row SUVs, which come loaded with features but are short on power.

For even more rugged capability, buyers may want to consider the Jeep Grand Cherokee, though its aging platform has many of the same faults as the Murano, with less predicted reliability.

The bottom line in this. There’s a lot going on around the Murano in its segment to give buyers reasons to choose other vehicles. Still, with its comfortable seats, good cargo space, and strong engine performance, there are few reasons to not give it a test drive.

If you’re hoping for a hybrid version of the Murano to debut and think you’ll wait until that happens to pull the switch for the Nissan, you might not want to hold your breath. The Nissan Airya all-electric SUV is on its way to the U.S. with Murano-like design.

Have you driven a 2020 Nissan Murano?
Rank This Car

Enter your zip to see incentives for a new Murano in your area.

I Have A 2020 Murano And HATE The Backup Camera

I love the 2020 Nissan Murano but they have a awlful backup camera. I've taken it to the dealership and its what it is. I can't see good because its too dark and they can't do anything about it. ...