The 2020 Mazda3 looks sharper but costs more than your average compact sedan. 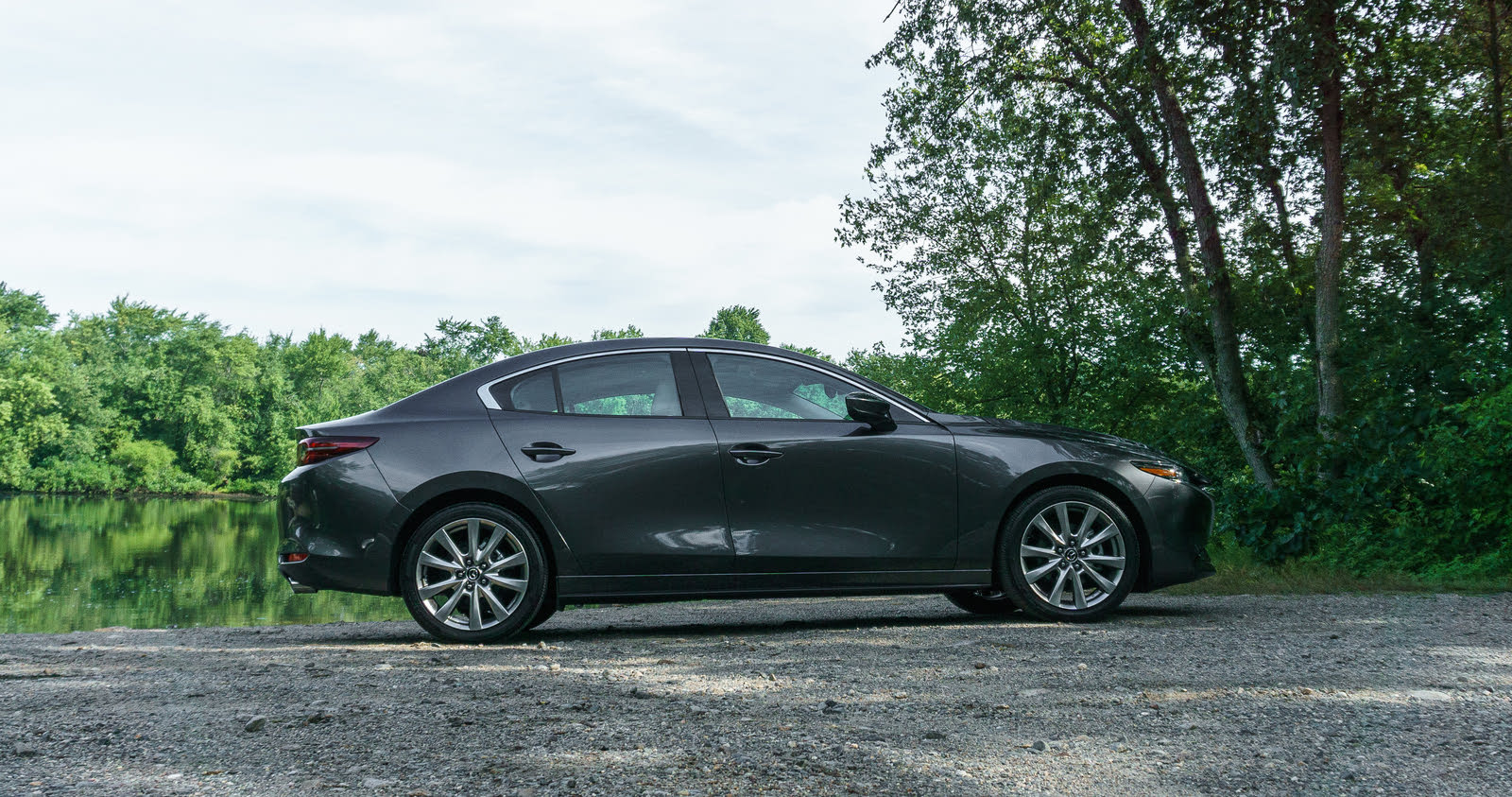 Mazda redesigned the Mazda3 in 2019, taking what was already one of the best-looking compact cars on the market, and attempting to dress it up even further. The goal was to elevate the brand into near-luxury territory. While the 2020 Mazda3 may not compete on the same plane as a Mercedes-Benz CLA-class or a BMW 2 Series, it feels undeniably premium when benchmarked against more mass-market competitors. 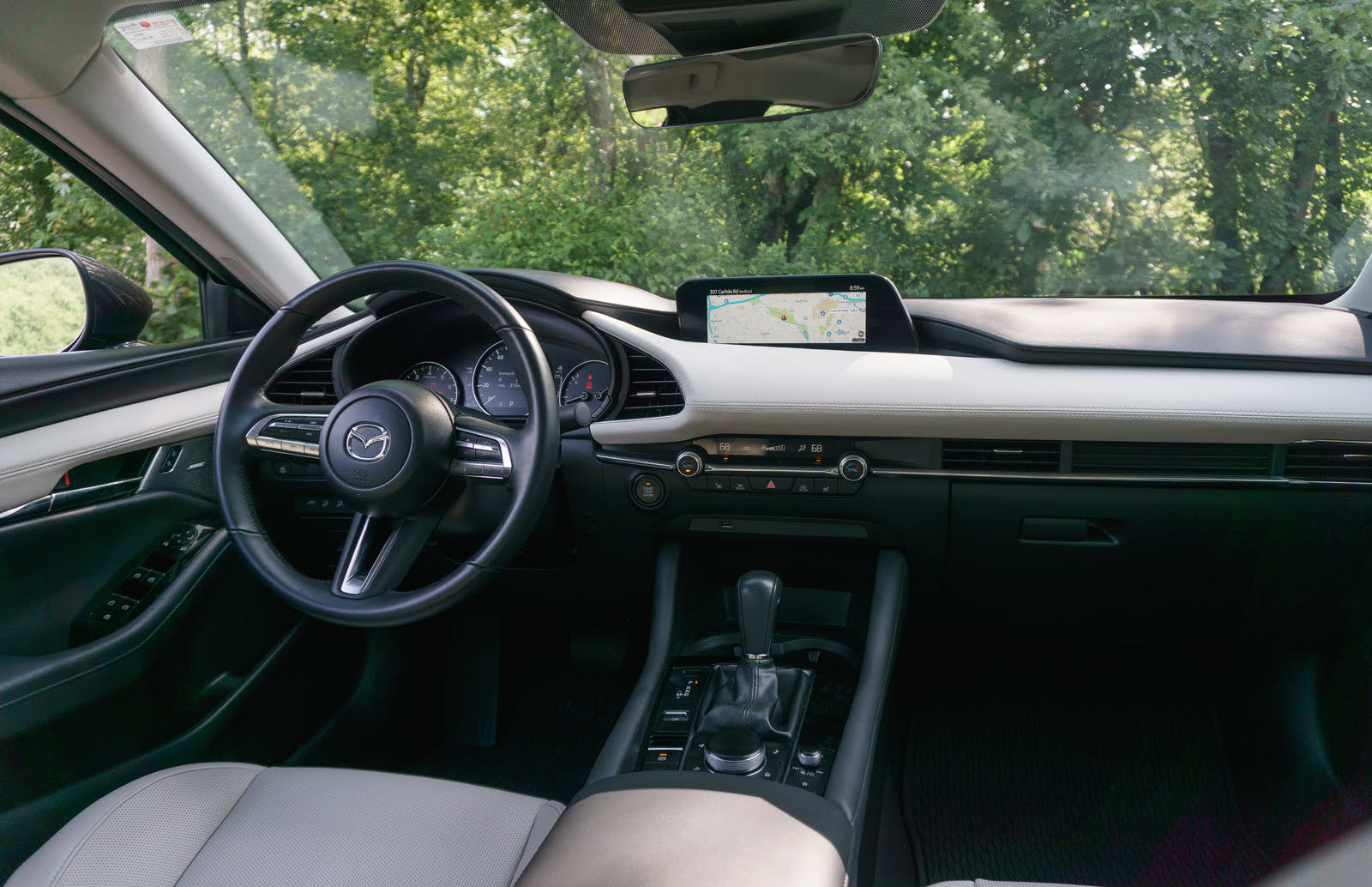 As has always been the case, shoppers can choose between sedan and hatchback body styles for the Mazda3. The hatchback looks truly special, with curves galore and a silhouette unlike anything on the road. It’s also the body style that’s more often used in press materials and advertisements; Mazda knows what it has with the 3 hatchback. However, many shoppers in the United States still prefer a sedan over a hatch, and if the goal is to compete upmarket, there’s no denying that a sedan contends more directly with the existing field—you can’t buy an Audi A3 hatch in America anymore, after all. If you’re trying to compete with the Germans, sedans still play.

Regardless of body style, the Mazda3 looks special. Our test vehicle was a Mazda3 sedan with the Premium Package and all-wheel drive (AWD). The 18-inch alloy wheels look great in the sedan’s small wheel wells, and they come standard on all but the base-trim-level vehicle.

Our test car features a stunning, blacked-out, mesh front grille and beautiful round running lamps. Unfortunately affixing a license plate to the front will interrupt that grille, and those lamps lose their luster when you illuminate the headlights. Past the front, the 3 stands out with a side profile that looks sculpted but not angular—unlike the Honda Civic, Toyota Corolla, Kia Forte, or other competitors that have opted for sharp, angular styling, there are hardly any straight lines on this car.

The only area where the Mazda3 loses some of its luster is at the rear. On the sedan, the dimensions feel out of proportion, as if the car had been cut short, particularly when compared with Mazda’s other sedan, the larger Mazda6. Despite stretching even shorter than the sedan, the hatchback’s more naturally rounded shape eliminates this illusion. Design creeps even further into premium territory inside the Mazda3. Simplicity and minimalism are the guiding principles, with each surface delightfully bare of clutter and noise. Our vehicle featured creamy white leather, although you can spec a Mazda3 hatchback with awesome red upholstery. The buttons on the steering wheel are slim, with a light font. The air vents placed on either side of the information display’s cowl give the driver a cockpit-style feel.

Materials are softly padded with plenty of leather, although nothing is quite up to the standard you’d find in a more expensive luxury sedan. The cupholders now sit forward of the gear selector, whereas the previous generation positioned them behind. The result allows Mazda to extend the armrest right up to the center console, which does wonders to support the car’s driver-focused design theme. The entire package will look right at home next to a Volvo.

Unfortunately, while Volvo has made a name for itself with solid construction and sturdy materials, the sheet metal on our Mazda3 test car still felt low rent. Closing the trunk or the doors sounds light and hollow; there’s no satisfying thud. 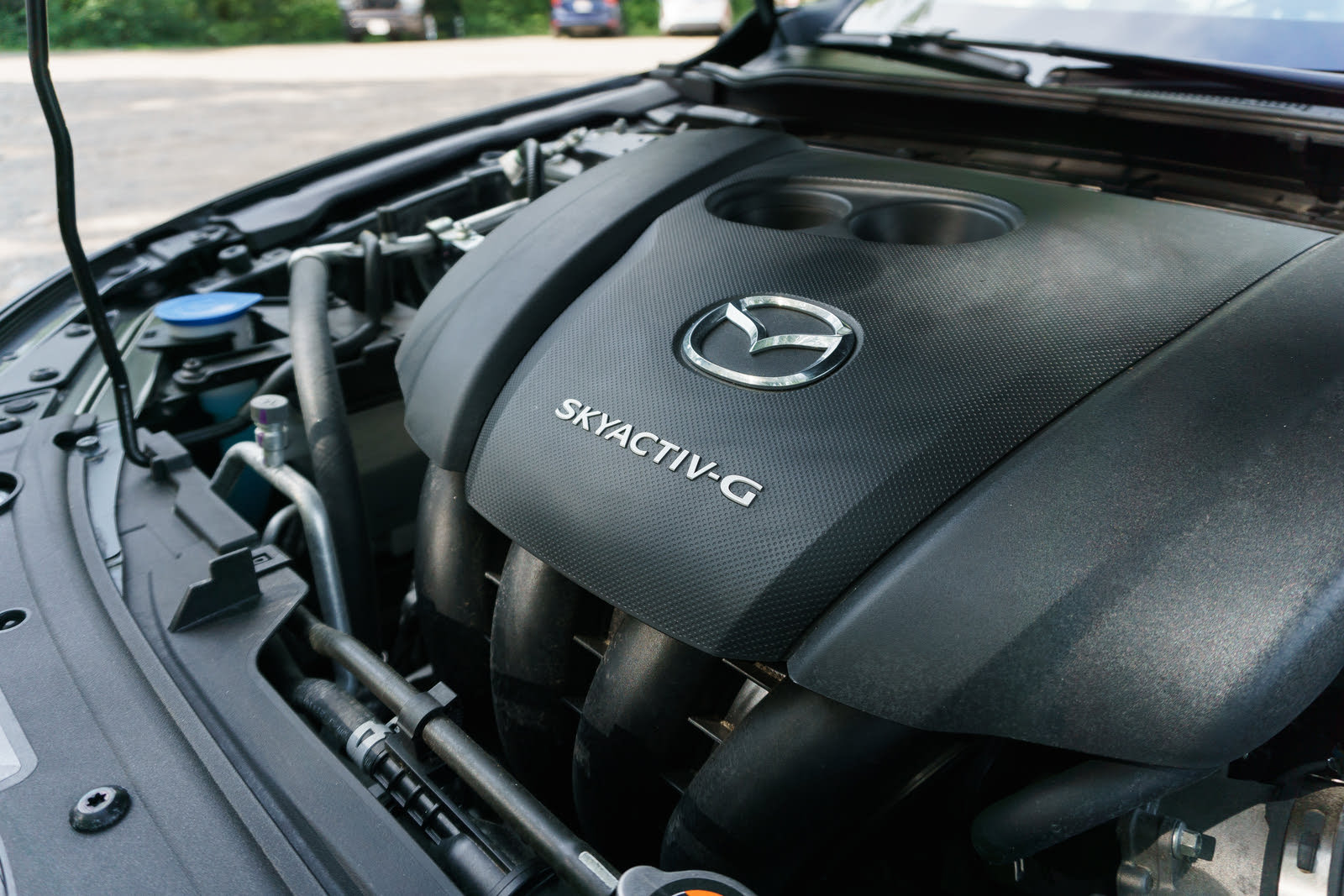 Hiding under its gorgeous sheet metal lives the Mazda3’s greatest compromise. In redesigning the car for 2019, Mazda replaced the multi-link rear suspension with a torsion beam setup. A torsion beam is cheaper and easier to engineer and is essentially a solid, flexible steel component that twists to absorb road imperfections. A multi-link suspension, on the other hand, employs independent control arms for each of the wheels, allowing one wheel to absorb bumps and dips while minimally impacting the other wheel. In short, multi-link suspensions are better.

The 2020 Mazda3 suffers from this cost-cutting decision, but likely not enough to deter buyers already sold on the car’s look and feel. While enthusiasts will bemoan the loss of the more sophisticated suspension (and likely hold the previous, third-generation Mazda3 in high regard as a true sporty compact), consumers may not notice the difference in everyday driving. Steering remains outstandingly precise and there’s little roll through corners—just be prepared for a little jostling when you nail those potholes.

In terms of powertrain, all 2020 Mazda3s employ a 2.5-liter SkyActiv four-cylinder engine bumped up to 186 horsepower and 186 pound-feet of torque. This is an improvement over the previous-generation car, which slotted a 2.0-liter engine making 155 hp and 150 lb-ft of torque in Sport trims, reserving the 2.5-liter for the more expensive Touring and Grand Touring trim levels. Lest shoppers get flustered: fourth-generation Mazda3s have abandoned the Sport/Touring/Grand Touring nomenclature, in exchange for Preferred and Premium trim-level “packages.”

The engine is good and predictable, but it lacks the immediate punch that turbocharged motors have while accelerating from a stop. Mazda has announced a Mazda3 Turbo for 2021, which will use the 2.5-liter turbocharged unit in the CX-5 and CX-9 SUVs.

Long beloved as an enthusiast brand, Mazda likely won’t be eliminating the manual transmission entirely anytime soon. That said, car companies are in the market to make money, and Mazda’s curious transmission options clearly assume that those who want to row their own will be willing to pay for the privilege. You can buy a Mazda3 with a six-speed manual, but only if you purchase a front-wheel-drive (FWD) hatchback model with the preferred or premium package. So, although the 3 starts at $21,500, a manual model will cost at least $25,200. Our test vehicle sported a six-speed automatic transmission, and most cars on dealership lots will, too. 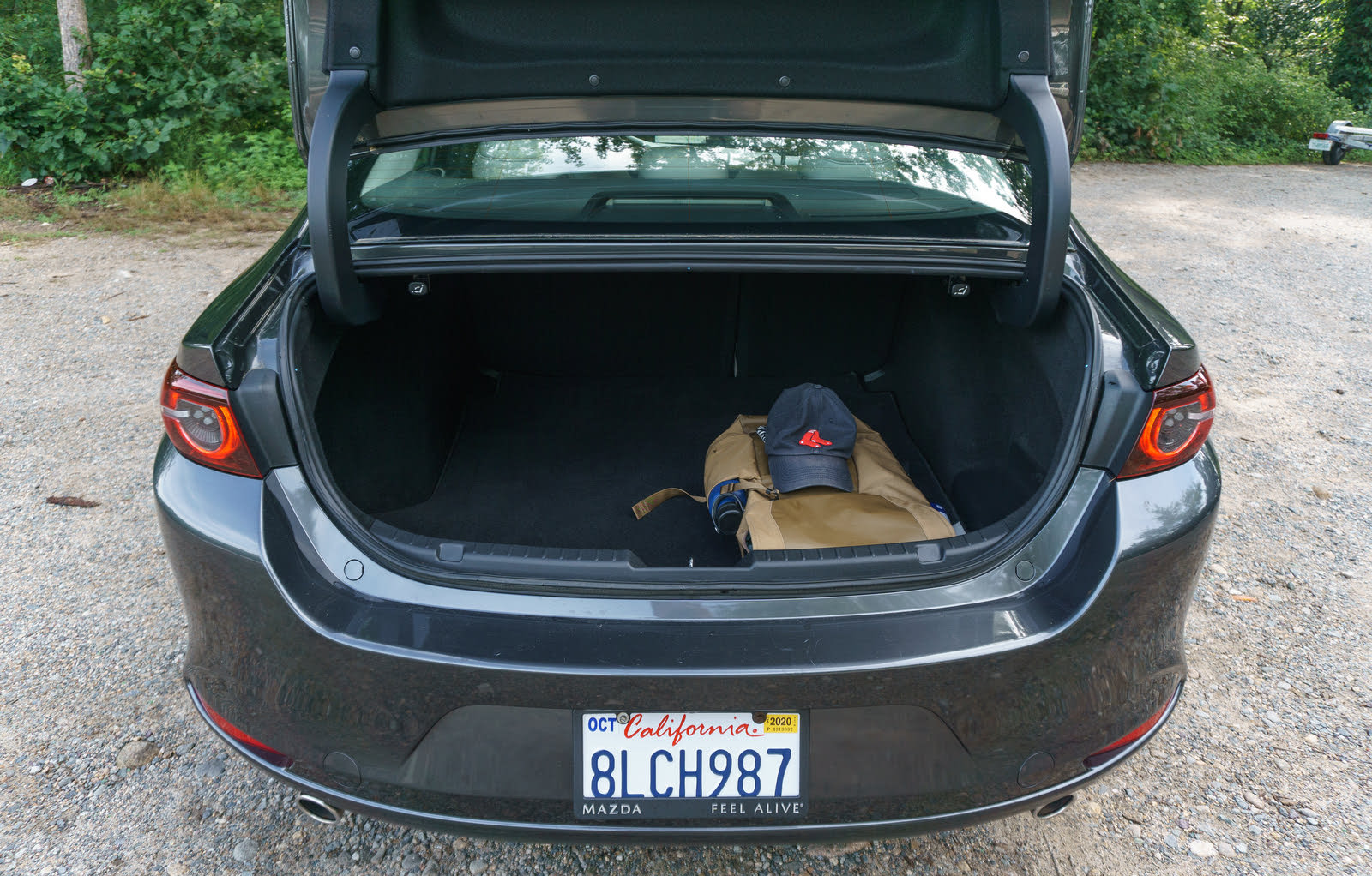 The sedan’s length stretches 183.5 inches on a 107.3-inch wheelbase, and things are even tidier on the hatchback, which spans just 175.6 inches. Despite these compact dimensions, there’s plenty of room inside for the driver, with plenty of headroom. And while the back seat is a little tight on legroom, the front seatbacks are very soft, so you won’t mind having your knees pressed against them.

In fact, the surfaces in the front seat and the rear seat are lovely. The front seats are supportive and offer plenty of adjustment—the driver's seat can be positioned incredibly low, for those who enjoy a sports car’s driving position. The materials hold up well, too. Although the typical test vehicle has only a few thousand miles on the odometer, our Mazda3 tester was sitting just over 10,000—but the upholstery still looked brand new.

The most unfortunate detail inside the Mazda3 is its large transmission hump ahead of the rear middle seat. Whether you buy a Mazda3 with front-wheel drive or all-wheel drive, middle-seat rear passengers will have to deal with this. 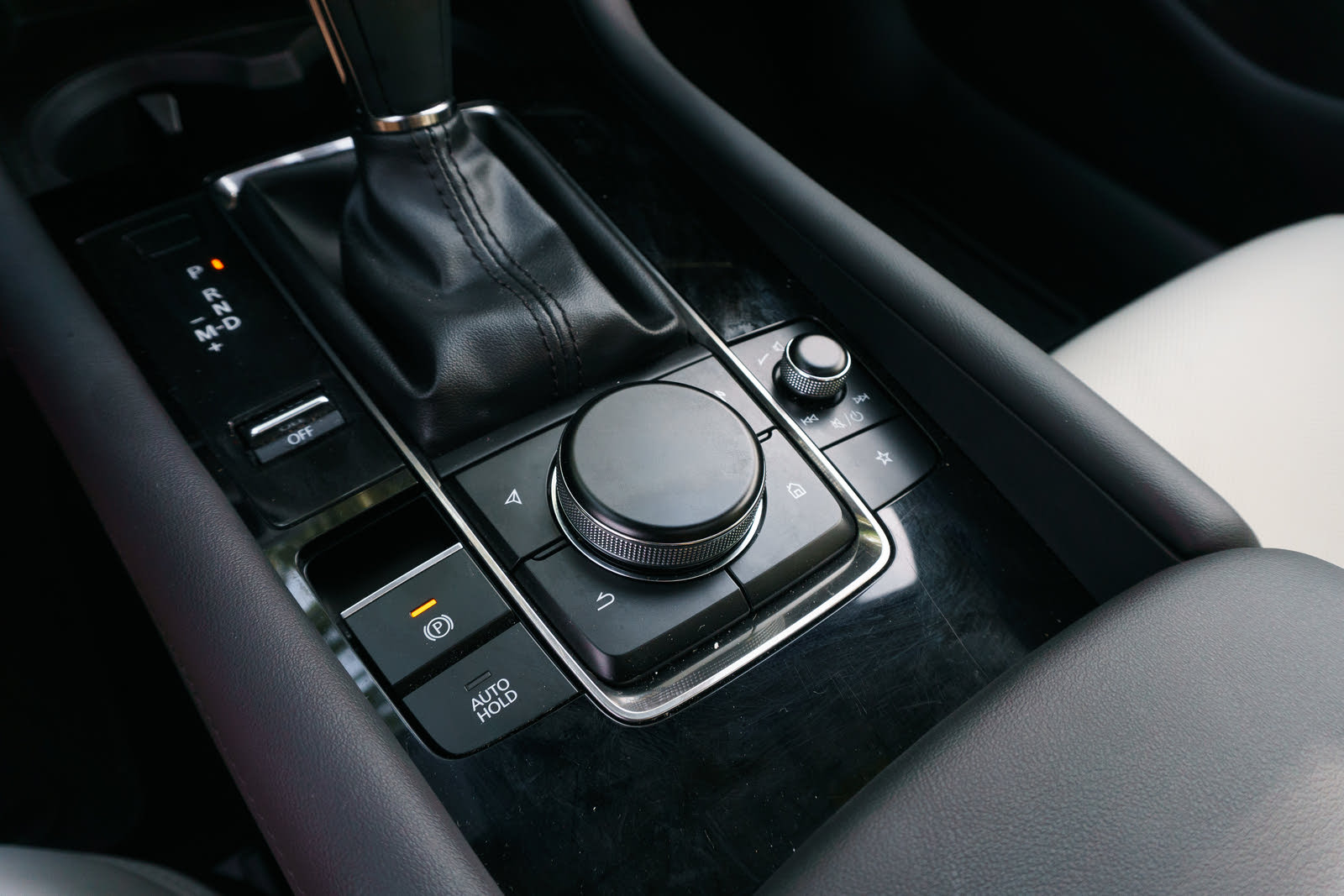 Mazda’s new interior design places the 8.8-inch infotainment display high up on the dashboard, recessed toward the windshield, and avoiding the “tacked-on” look that is still common in the industry. Rather than looking like an iPad stuck on the dashboard, this design blends the screen more seamlessly into the dashboard.

It also makes it harder to reach. And anyone used to or expecting a touchscreen display will be in for a surprise. Mazda has made the bold decision to eliminate touch functionality entirely from its infotainment system. Simply put, Mazda contends that touchscreens are dangerous to use while driving and, as such, the Mazda3’s navigation and infotainment capabilities are all managed via a rotary dial controller positioned between the front seats.

There are some dedicated buttons to go along with the round controller dial, and the volume knob—also positioned between the front seats—has been enhanced with some additional controls. All in, the new Mazda system may take some getting used to, but it’s not hard to master.

Apple CarPlay and Android Auto are included, as is Bluetooth connectivity, and Sirius XM satellite radio is available. Mazda’s new infotainment software is also noticeably faster than past iterations, and the graphics look very sharp. The thin fonts pair well with the writing on the 3’s steering wheel and supplement the cabin’s overall minimalist design. In an attempt to reinforce Mazda's upmarket aspirations, the head-up display (HUD) now reflects off the windshield, rather than the flimsy piece of plastic in older model-year cars. 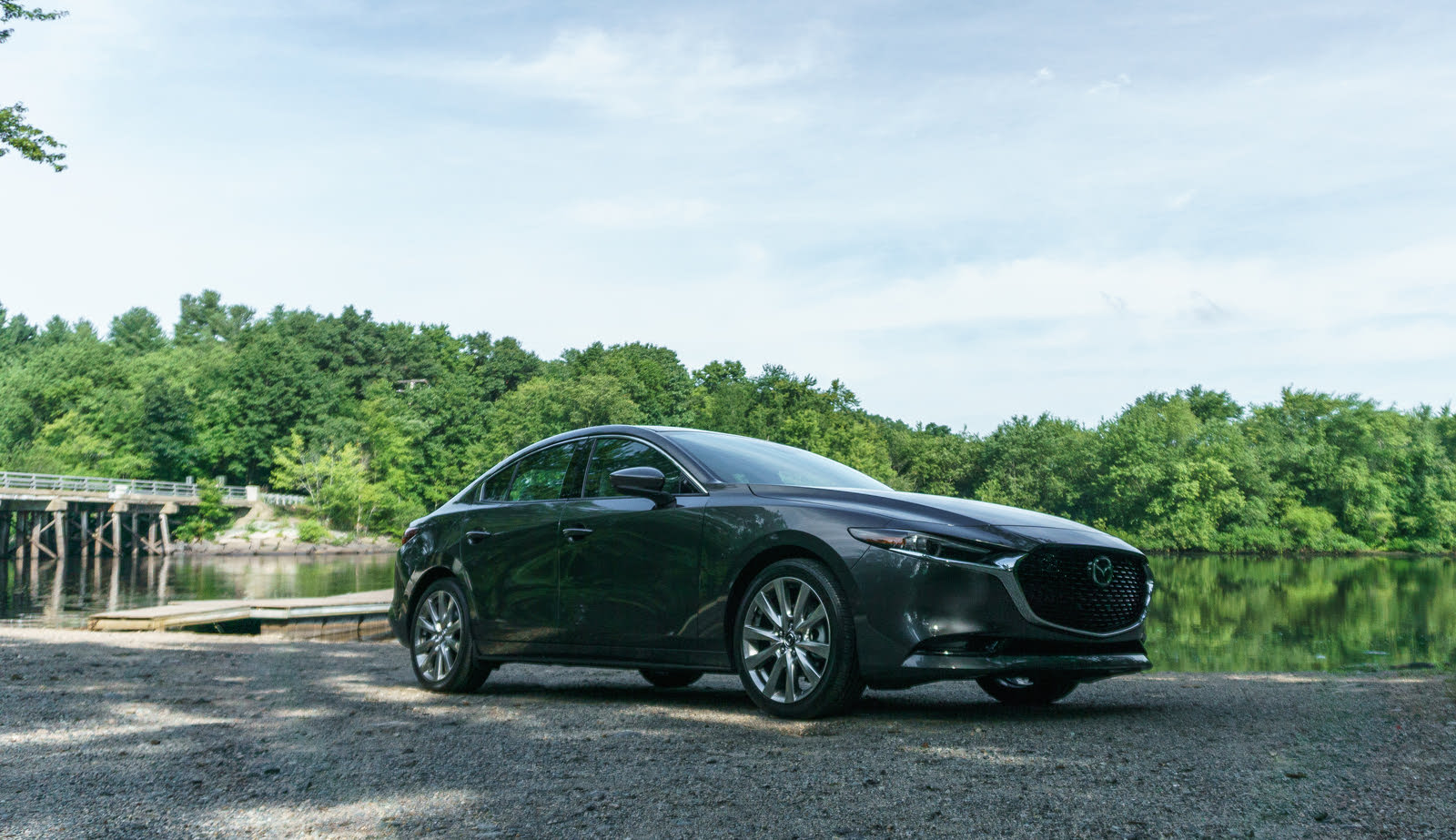 Labeled a Top Safety Pick+ by the Insurance Institute for Highway Safety (IIHS), the Mazda3 is definitely a good choice for shoppers hoping to protect themselves and their passengers. The 2020 sedan was awarded the top score of Good in all crash tests, and the Premium Package’s LED headlights also received a Good rating. Lower trim levels received an Acceptable score for their headlights. 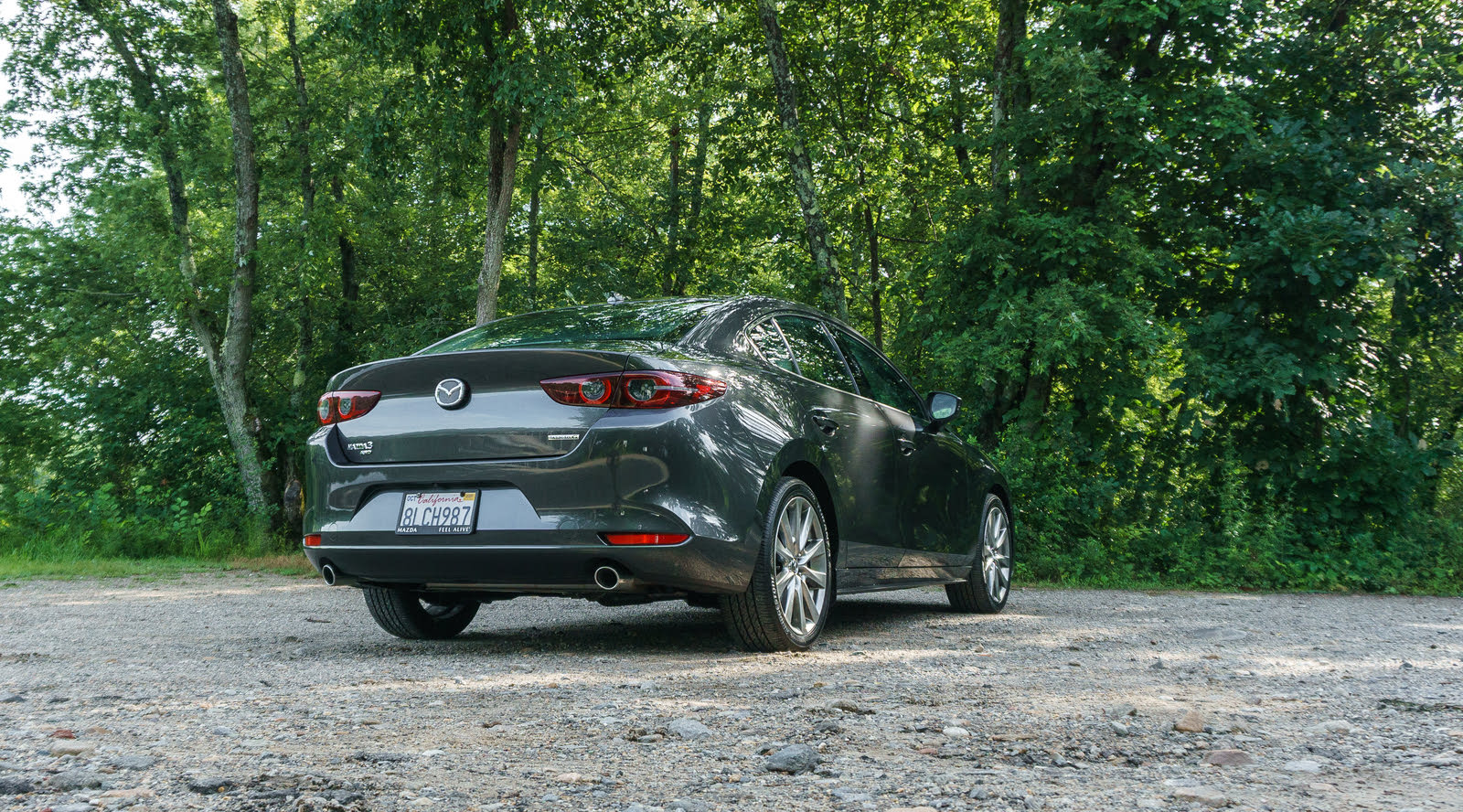 You can expect decent fuel economy: The EPA says it will get 25 mpg in the city and 33 on the highway. We averaged 31 in combined driving.

Compared to an entry-level Audi, BMW, or Mercedes-Benz, the Mazda3 is an undeniable bargain. However, despite its impressive style, tech, and safety equipment, it still pales in comparison with those brands in terms of fit and finish, build quality, and materials. The new-generation Mazda3 looks good, but anyone used to shopping for a German luxury car likely won’t be impressed by Mazda’s entry-level sedan.

Against a Toyota Corolla, Honda Civic, Kia Forte, Nissan Sentra, or Hyundai Elantra, however, it’s the opposite story. Nothing in this segment looks as good as the Mazda3, and few competitors drive as well. Unfortunately for the Mazda3 shopper, however, none of those cars cost quite as much as a comparable 3, either. The Subaru Impreza, for instance, is the only direct competitor that offers all-wheel drive and both a sedan and hatchback body style. The Impreza won’t wow you with its interior or exterior styling, but it costs roughly $2,000 less than the Mazda3 across the trim-level lineup.

That makes the Mazda3 a curious entrant in either segment. Shoppers looking for luxury at a bargain will see this as a cost-effective solution. Those who just want an affordable new car for everyday transportation will likely cross it off their list as being too expensive.

Users ranked 2020 Mazda MAZDA3 against other cars which they drove/owned. Each ranking was based on 9 categories. Here is the summary of top rankings.

Have you driven a 2020 Mazda MAZDA3?
Rank This Car

car was revving but did not move. Pulled over and turned car off and on, and then it was fine. But is this cause for concern