The Range Rover Evoque set the standard for modern subcompact luxury crossovers. Now it raises the bar once again. 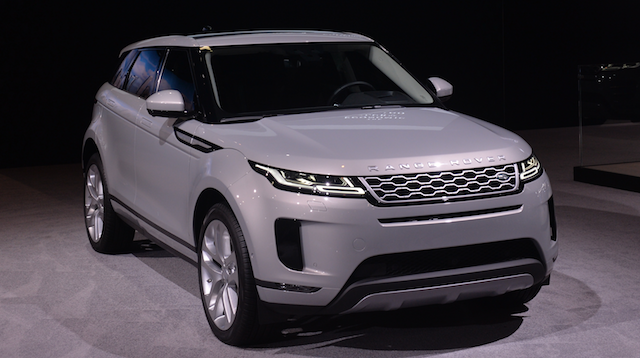 Small crossovers represent the fastest-growing segment among new cars, and in many ways have replaced sedans as the default choice for daily transportation. With the rise of small crossovers has come the booming popularity of the subcompact luxury crossover/SUV segment. And the vehicle that started it all was the Land Rover Range Rover Evoque, with standout styling and solid off-road chops. But since it rolled onto the scene a decade ago, competitors like the Lexus UX, Mercedes-Benz GLA, and others have followed suit. So, Land Rover has responded with an all-new Evoque for 2020.

The typical buyer in this segment is likely a city dweller or suburbanite who wants modern upscale amenities without having to opt for a larger vehicle. The 2020 Land Rover Range Rover Evoque has been completely redesigned, and it’s poised to suit these types of consumers. But how does it stack up against a growing set of competitors? Read on to find out, and learn which trim of the Evoque CarGurus recommends. 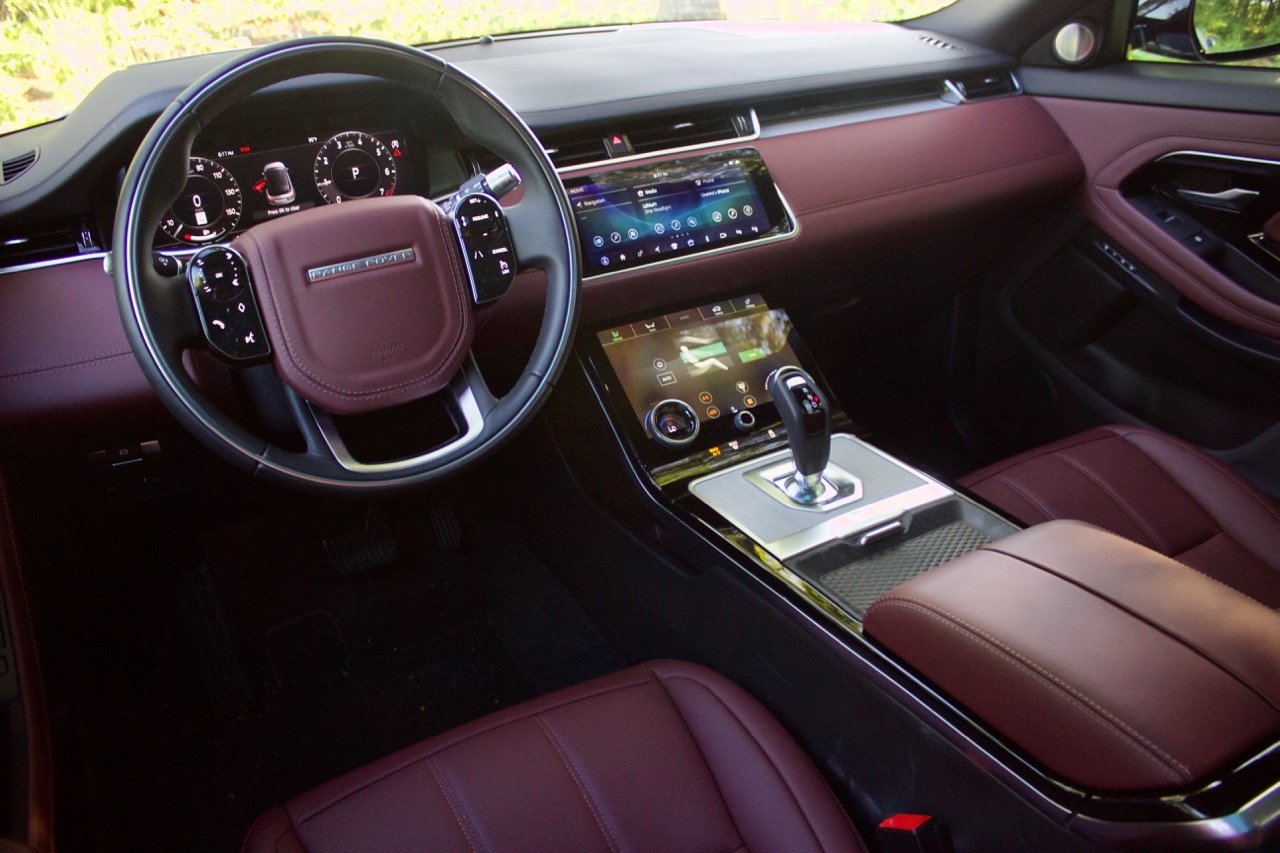 In the Range Rover line, you’ve got the big-boy namesake, the Range Rover Sport, Range Range Rover Velar, and this: the 2020 Land Rover Range Rover Evoque. It’s the smallest member of the Range Rover family, but arguably one of the best looking, characterized by raked headlights and blacked-out pillars, which have become Range Rover design staples. A more recent trend found on the new Evoque is the use of flush door handles. These look and work like regular handles until the car is locked or when the vehicle is moving above 5 mph. Then, they retract to become flush with the car's sheet metal. They contribute to an impressively clean look, and the result is one of the best-looking vehicles in the subcompact luxury crossover segment.

Like the exterior, the cabin looks top of its class. It features a minimalist design, with clean lines and angles. Traditional luxury touches are subtle, such as the small woodgrain panel that shapes up the shifter, as if to hint at old-school luxury—keeping a small piece of the past, while thoroughly looking to the future.

There are effectively six trims of the 2020 Evoque, starting with the base P250 S. The P-number designation denotes powertrain, while S, SE, HSE, and R-Dynamic signify various content and appearance combinations. The other trims in the lineup include the P300 R-Dynamic S, P250 SE, P300 R-Dynamic SE, and the range-topping P300 R-Dynamic HSE. That’s five, and the P250 First Edition (commemorating the first year of a redesign, and costing a healthy premium) makes six. The base P250 S trim comes with leather seating, push-button start, dual-zone climate control, and 10-way power-adjustable seats.

CarGurus recommends the lineup's next trim, the P250 SE, which is our test model. It adds a 360-degree camera, power liftgate, rear cross-traffic alert, and 14-way power front seats. For both trims, a panoramic moonroof is available, as are heated seats and a head-up display. These are standalone options on the S and SE, though prices vary by trim.

The P300 R-Dynamic S and SE trims are very similar to their P250 counterparts, with the exception of more aggressive bodywork and an upgraded powertrain (more on that shortly). The range-topping R-Dynamic HSE adds 16-way power front seats, upgraded premium leather upholstery, a hands-free gesture-control tailgate (optional on other trims), and a 10-speaker Meridian premium sound system. The HSE's only options are massaging front seats and heated rear seats. The First Edition has the P250 powertrain, with the look of the R-Dynamic and the content of the SE trim. 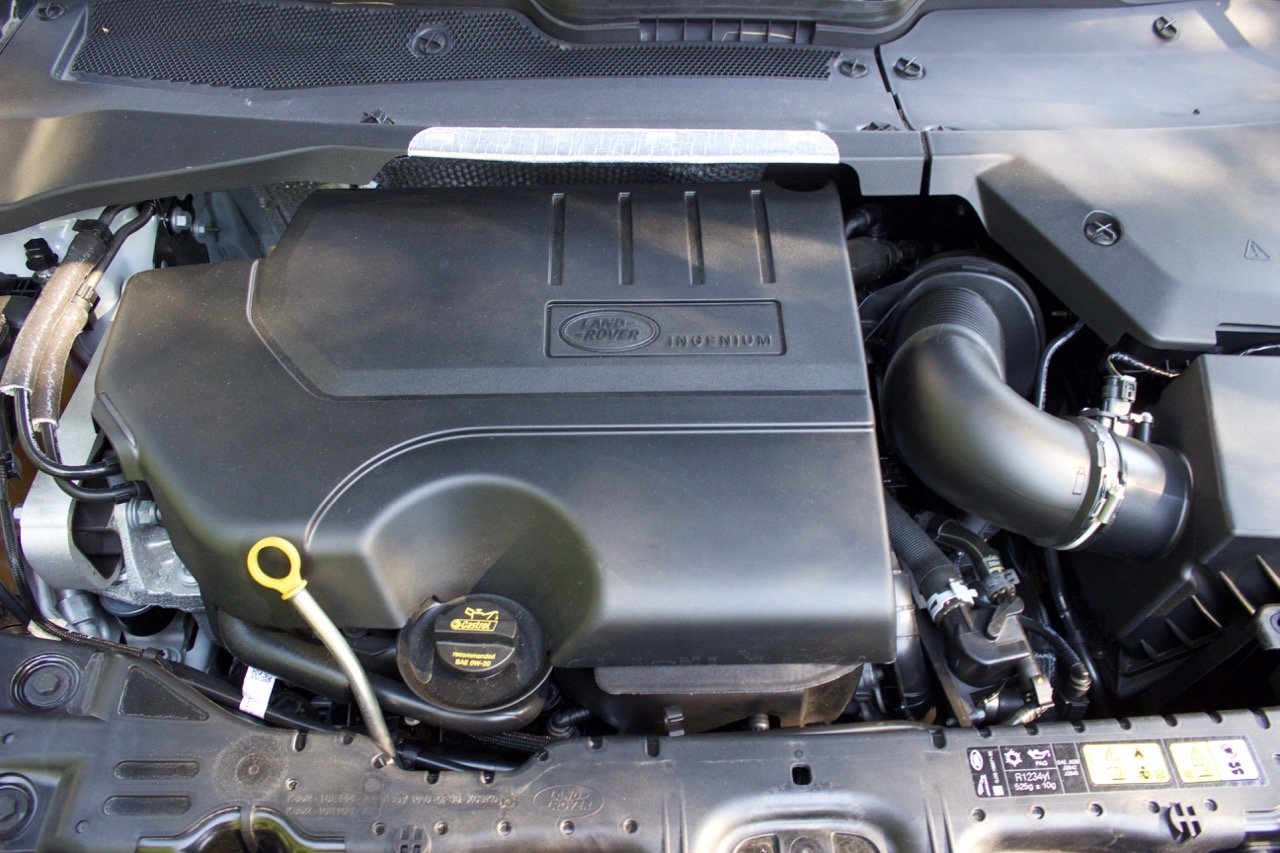 At their core, both the P250 and P300 use the same 2-liter turbocharged 4-cylinder engine. In our P250 SE test model, it makes 246 horsepower and 269 pound-feet of torque. It's certainly no slouch. It provides plenty of hustle, though you can feel a momentary pause due to turbo lag.

The P300 differs thanks to the addition of a 48-volt battery, which creates a mild-hybrid system making 296 hp and 295 lb-ft. Both versions send power through a 9-speed automatic transmission to permanent all-wheel drive (AWD). The automatic is responsive and kicks down into a more aggressive gear quickly, providing slick acceleration when you need it. We did not drive the P300, but electric power typically shines in low-end acceleration—especially from a standstill. This means the minor lag issue we experienced with the P250 is likely nonexistent in the P300.

Powerful engines are all well and good, but off-road capability is core to Land Rover’s identity. Luckily, the Evoque doesn’t disappoint. The 2020 Range Rover Evoque comes with Land Rover’s Terrain Response 2 system. It provides off-road modes as well as hill descent control. Our test model includes the Touch Pro Duo system (more on that later), which features dual touchscreens. The lower one offers a pair of dials, which typically control climate and heated/cooled seats. But by pressing “vehicle,” the left dial will control the various drive modes: Auto, Rock/Crawl, Grass/Gravel/Snow, Mud/Ruts, and Sand.

Even though the names of the modes are ambitious, the Evoque is no rock-crawler. It’s more capable than other vehicles in its segment, but better suited to getting out of trouble in the snow or muddy fields. The Evoque is geared toward highways, boulevards, and making the daily commute. In these day-to-day on-road settings, it’s a very refined car.

It also features Dynamic mode, which firms up the handling for a more planted ride. When in Dynamic mode, the Evoque feels like a different car—more like a dialed-in luxury sedan than a small crossover. Steering is responsive, and the vehicle stays level even through spirited cornering.

And with the push of a button, you’re back in Auto. After spending nearly the whole week in Dynamic mode, I spent the last day in Auto. In this setting, the steering felt incredibly light, and the suspension allowed for a bit more body roll. But these are intended to make commutes pleasant. It’s always great to know the Evoque's more devious alter ego is just a button-press away.

The Evoque is available with the Drive Package. It's mostly about driver-assistance features, but the package's included sensors also allow it to sense the depth of water around the car. Land Rover has long boasted that its vehicles can ford into deep water, and this sensor pack shows you just how far you can go.

Fuel economy for our conventionally powered test model is 20 mpg city, 27 highway, 23 combined. The optional mild-hybrid trims are more powerful, but not more efficient, returning fuel economy of 21/26/23. In a week of combined city and highway driving, I observed fuel economy of 21.9 mpg. These are not terrific fuel economy numbers, and most other subcompact luxury SUVs in this segment are more fuel-efficient. 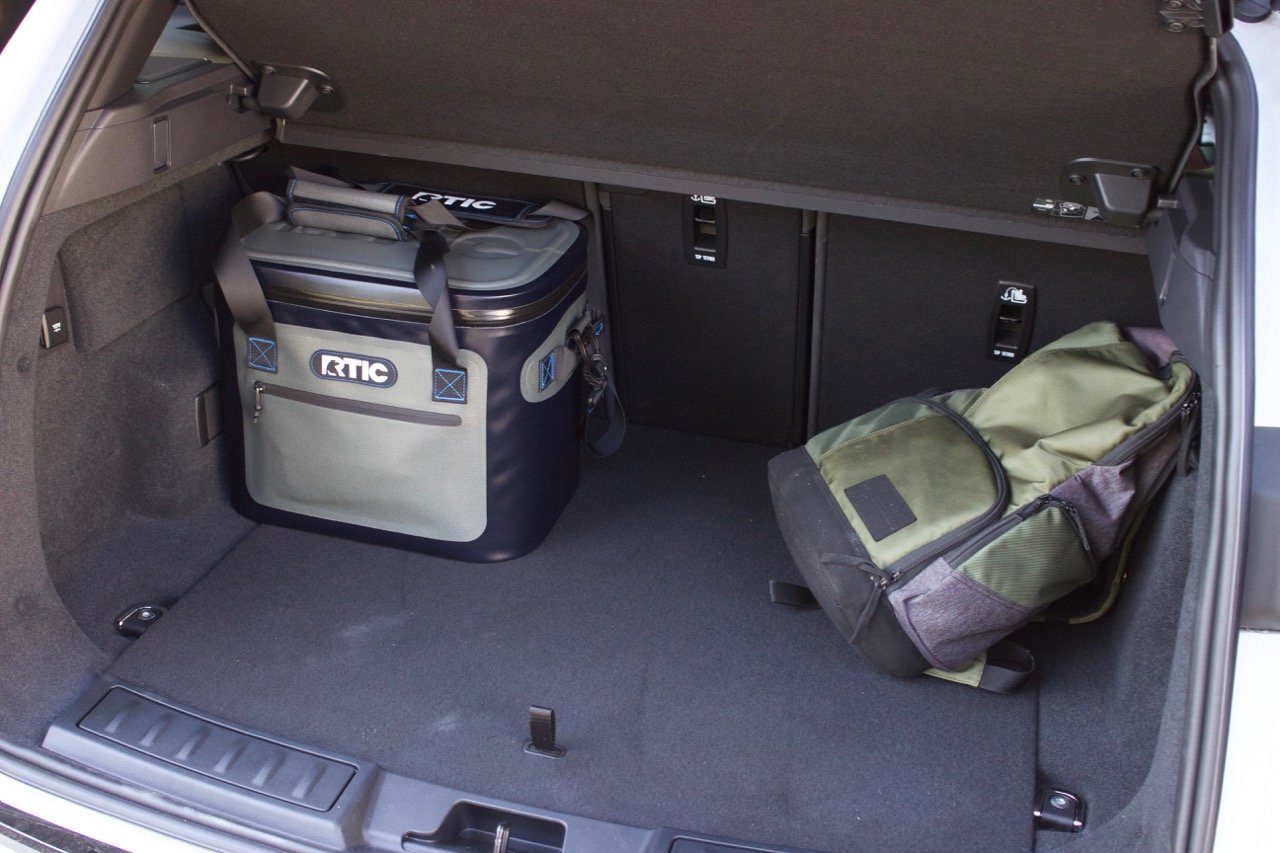 The front seats of the Evoque are spacious and provide plenty of head- and legroom for the driver and front passenger. The tilt-and-telescoping steering wheel also extends far enough that I can make myself comfortable despite my long legs and arms.

The front might feel accommodating, but the back seat area is a different story. Land Rover claims the 2020 redesign introduced more backseat space, but I don't see it. If there is more head- or legroom, it's not very noticeable. If either of the power-adjustable front seats needs to be moved back to accommodate a tall driver or front passenger, the second-row seats will be useless.

Cargo space is quite sparse as well. With the rear seats up, the Evoque offers 21.5 cubic feet of cargo space, which is slightly more than last year's car. But if you drop the rear seats, cargo space sits at 50.5 cubic feet—slightly less than the 2019 had. For comparison, a VW Golf has 53.7 cubic feet of cargo space, despite being smaller in every dimension. Unfortunately, this is often the case with subcompact luxury crossovers; backseat space and cargo capacity are always a little short. 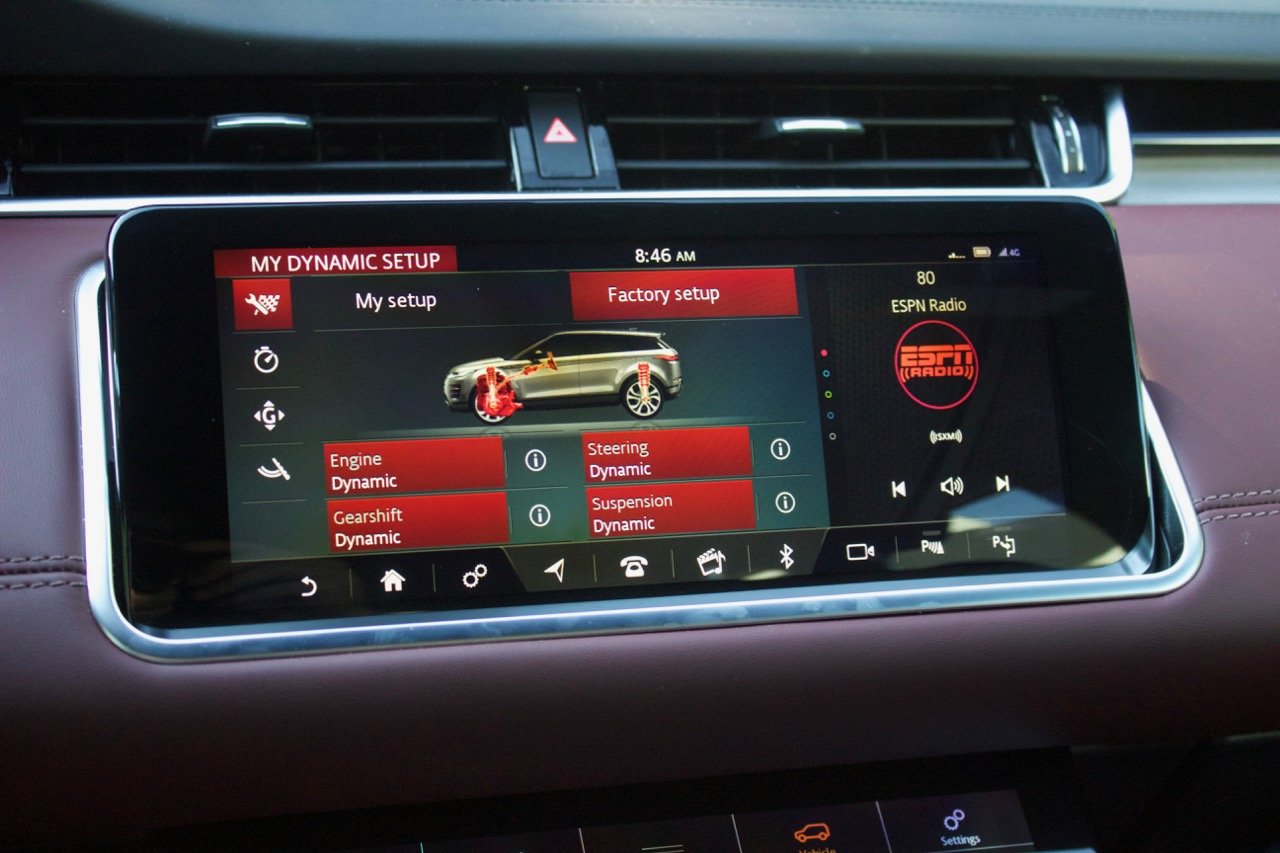 The base Evoque S comes with Land Rover’s Touch Pro system and a 10-inch touchscreen. This comes with Bluetooth connectivity as well as Apple CarPlay and Android Auto. You also get a navigation system and a WiFi hot spot.

Our SE test model comes standard with the Touch Pro Duo system. This adds a more advanced upper screen and a second 10-inch screen. The upper screen can tilt up and down, and the lower screen sits above the shifter, replacing the center-stack switchgear. You'll find buttons for Climate, Seats, Vehicle, and Settings on the lower screen. Press Vehicle to find your drive-mode settings.

These dual-screen systems have become increasingly popular in luxury brands. Unfortunately, they've also been met with mixed reviews. They are often confusing, and they remove some of the tactile simplicity of old systems. Land Rover combats this by keeping two large dials in the Touch Pro Duo system; their purpose changes based on which menu you're using.

Overall, it’s an improvement over past systems, but I noticed some lag and delays, and some of these touch-capacitive controls are non-responsive. If Land Rover can sort out these issues, it’ll have a solid system on its hands. 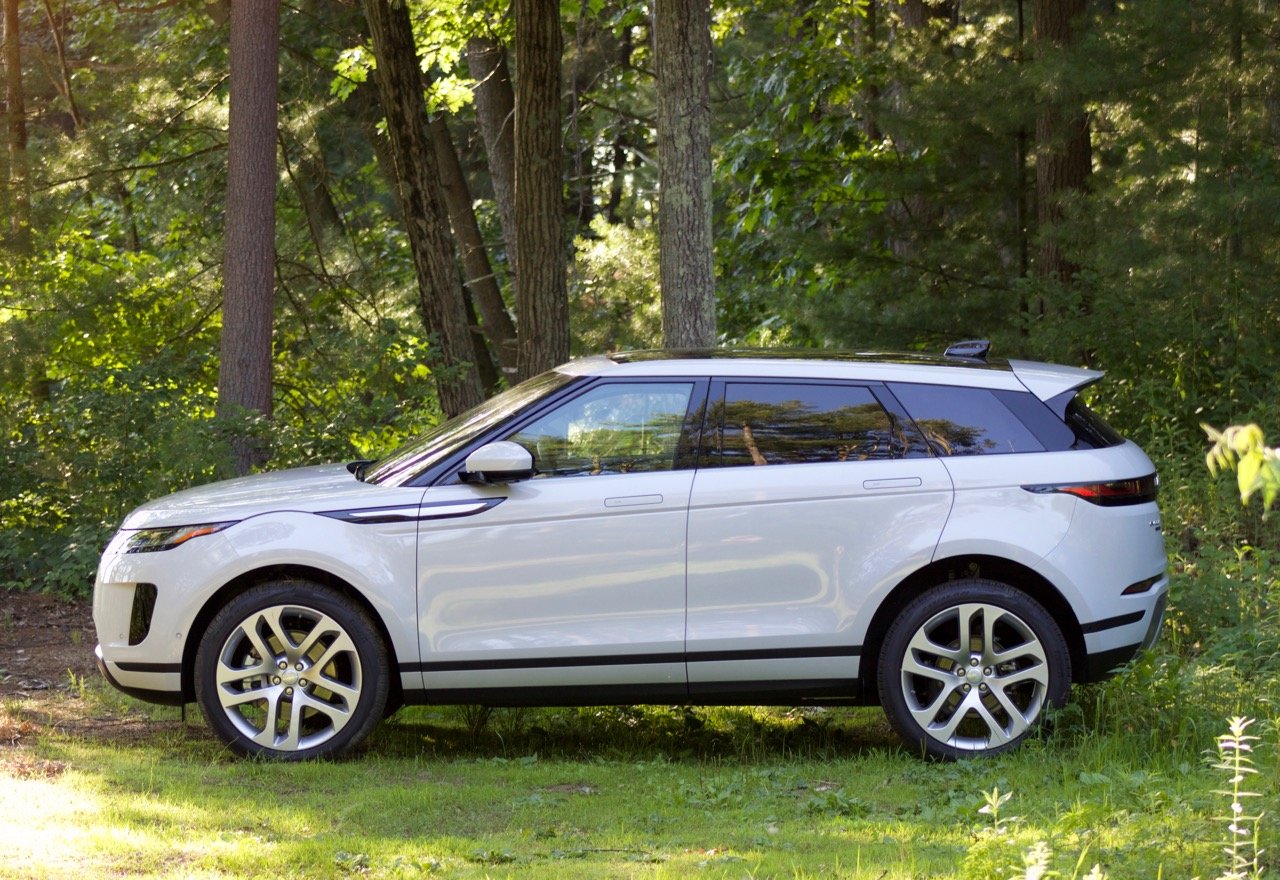 Standard safety features include a reversing camera, forward-collision warning, front and rear parking sensors, lane-keep assist, and traffic-sign recognition. The Evoque also comes standard with a driver-attention monitor that scans the driver for signs of distraction and drowsiness. It should be noted that the upper screen on the Touch Pro Duo system has a lot of glare, making it difficult to see during the daytime.

The Evoque is available with a surround-view camera, blind-spot monitoring, adaptive cruise control, and high-speed automatic braking. It also has a feature that uses the surround-view cameras to present an image that “sees through” the hood of the Evoque. That could come in handy when off-roading. 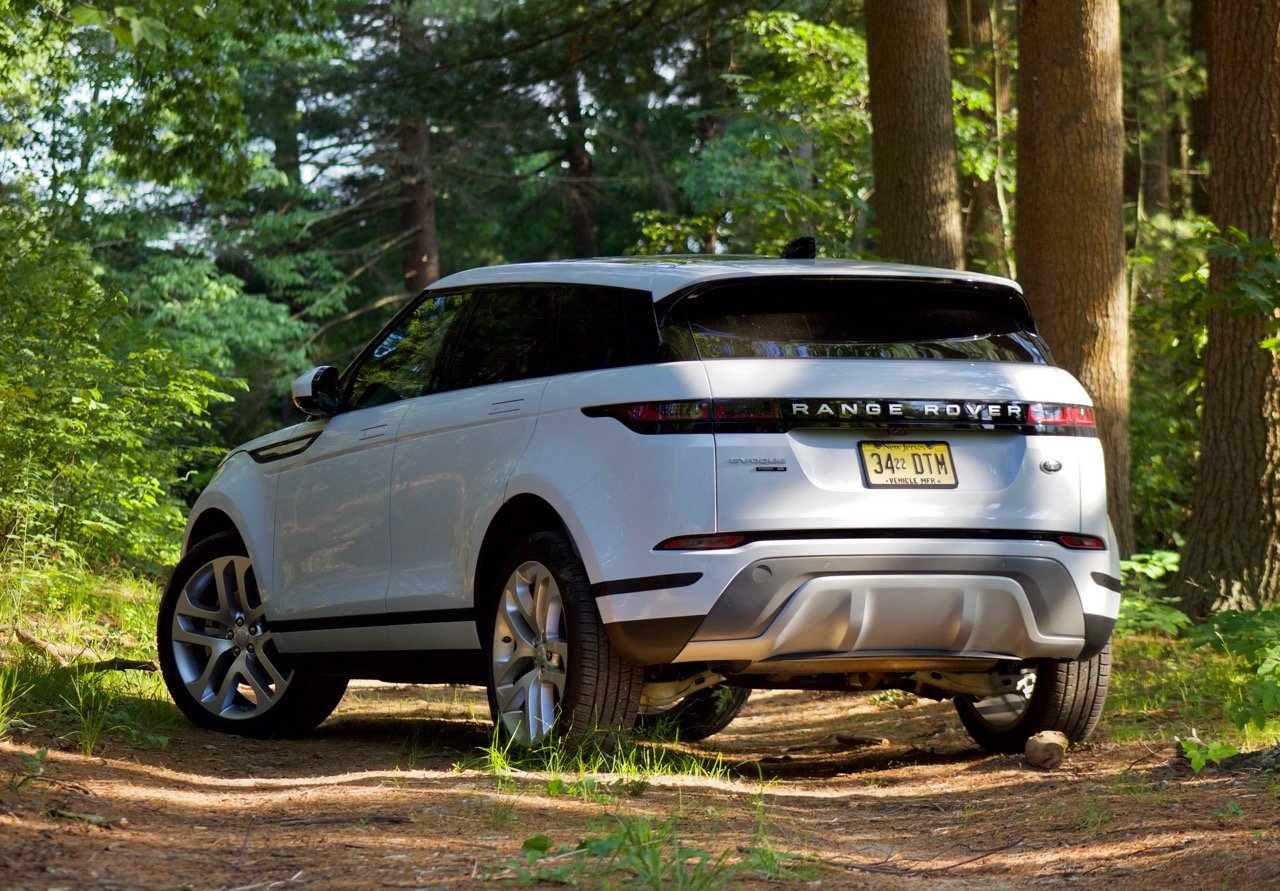 The Evoque is pricey, especially when the Mercedes-Benz GLA and Lexus UX start at closer to $34,000. But the difference is the Evoque can stand on its own. Sure, it uses the Range Rover branding, but it is a fully capable vehicle in its own right. Meanwhile, the UX and GLA feel like watered-down crossovers, using their connections to larger, more substantial siblings to falsely imbue them with legitimacy.

The Evoque is a standout because it carries all the attributes that make the Range Rover line so special—performance, capability, and luxury—squeezed into an elegant and subcompact package.

What's your take on the 2020 Land Rover Range Rover Evoque?

Have you driven a 2020 Land Rover Range Rover Evoque?
Rank This Car

Is It Better To Lease Or Buy A Range Rover Evoque?

I know this is Avery subjective choice however, Is it better to lease or buy a Range Rover Evoque with respect to the following: 1. Depreciation 2. Maintenance cost post 3 years for wear