With the freshened 2020 Jaguar XE, practicality takes a back seat to style, speed, and singularity. 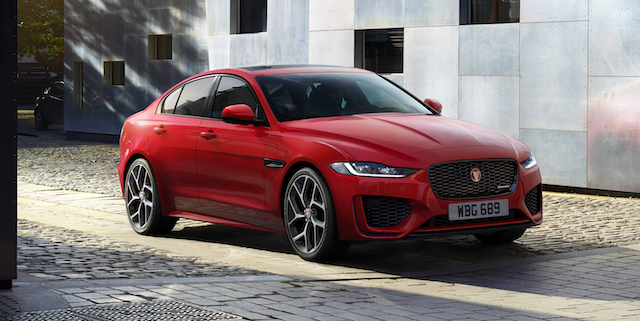 With the refreshed 2020 Jaguar XE, the proudly British brand again attempts to make its mark in the compact luxury sport sedan segment. Unfortunately for Jaguar, this year’s updates don’t address all of its shortcomings, and people shopping for a car like this enjoy a wealth of compelling alternatives. Nevertheless, if you want something undeniably stylish and enjoyable to drive, and you don’t want to see the same exact car during every commute, the updated 2020 XE deserves consideration. 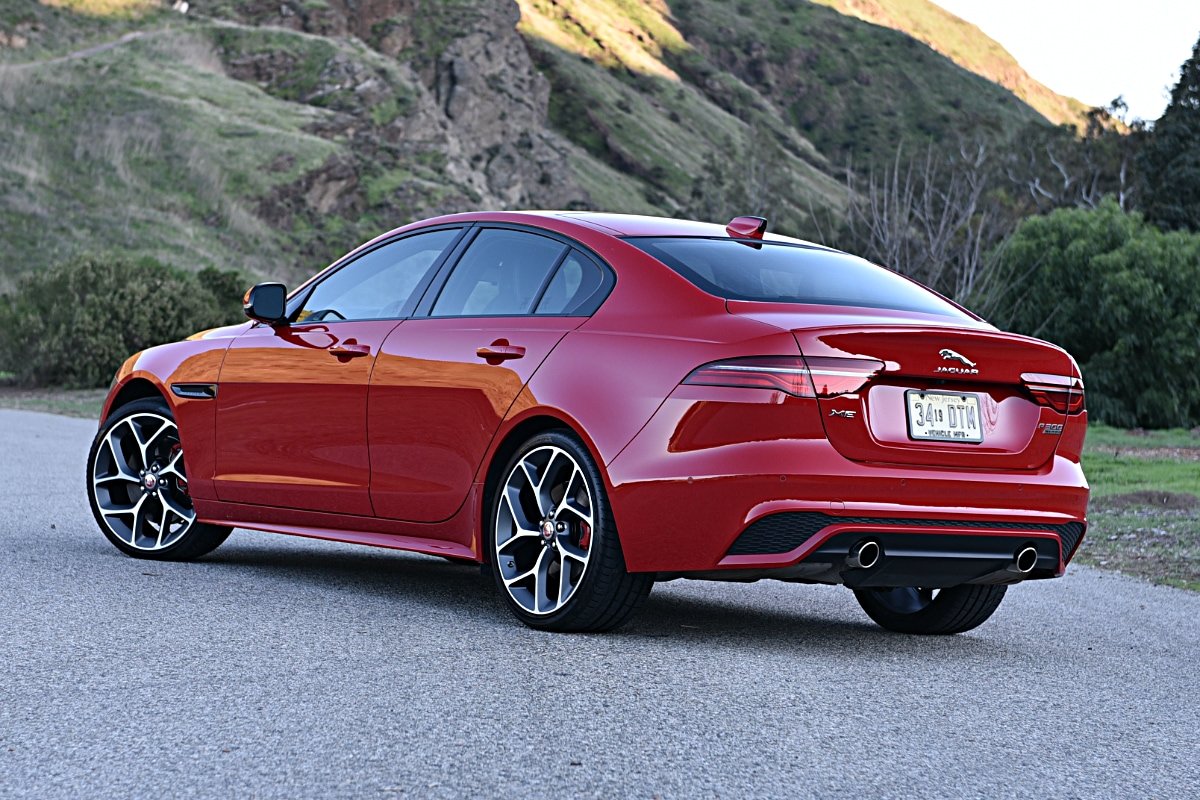 Styling sells. If they have an option, people don’t want to drive an ugly car. The 2020 Jaguar XE is anything but ugly.

Updated front and rear styling, including a new grille and LED lighting elements, aim to give the XE a lower, wider, and more authoritative appearance, according to Jaguar. I think the automaker meets those goals, especially when the XE is decked out in R-Dynamic S trim with the attractive optional 20-inch wheels. Not only do they look good, but they also hide brake dust and are remarkably easy to clean.

Inside, the XE gets a substantially reworked interior with upgraded materials, improved storage, revised controls, new seat designs, and a new steering wheel. This is nothing but good because the interior is where you spend most of your time. Inside a pricey luxury car, it had better look and feel like a pricey luxury car. For the most part, the XE’s new cabin meets expectations. It even smelled great.

My test car was the latter version of the XE, equipped with almost every option. A $63,125 as-tested price, including destination, was the result. 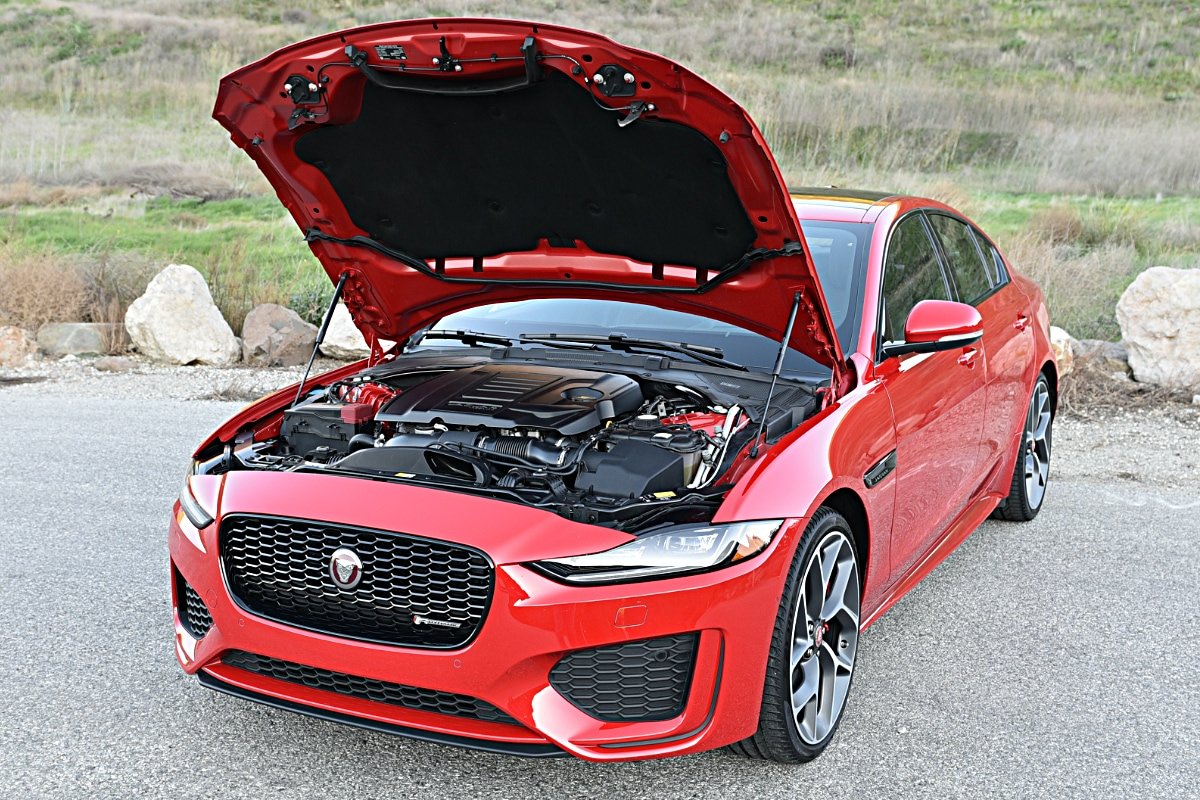 While these changes appear to leave driving enthusiasts in the lurch, the P300 R-Dynamic S is still plenty quick. It will rush to 60 mph in a claimed 5.4 seconds, nearly a second faster than the P250 S. You get paddle shifters in this version of the car, too, though using them isn’t terribly rewarding. While the engine offers a pleasing note, it’s also muffled and doesn’t offer any snap, crackle, or pop.

When the XE first debuted, it credibly targeted the best-driving sedans in the segment, Now, though, the car’s age is starting to show. Despite the Adaptive Dynamics suspension, my test car felt too stiff over sharper bumps in the road, and when tossing it down an undulating mountain road, the mostly aluminum vehicle architecture flexed enough to make the cabin creak.

Steering feel and response, however, is excellent. And the larger 20-inch wheels with performance tires, combined with AWD and brake-induced torque vectoring, deliver Herculean grip. The tested version of the XE also comes with larger performance brakes that work flawlessly when driving hard and fast, although they do make it harder to bring the Jaguar to a smooth stop in urban driving situations.

The end result is a good luxury sports sedan, but not a great one. The Jaguar XE is enjoyable to drive but does not beg to be driven. And there is a difference.

This Jag isn’t terribly fuel-efficient, either. The EPA says it should get 25 mpg in combined driving, but the car returned 20.3 mpg on my testing loop. Granted, I used Dynamic mode for the twisty mountainous bits, and I fiddled with the paddle shifters for a bit, but I did not drive any differently in the XE than I would any other car I test on the same route. 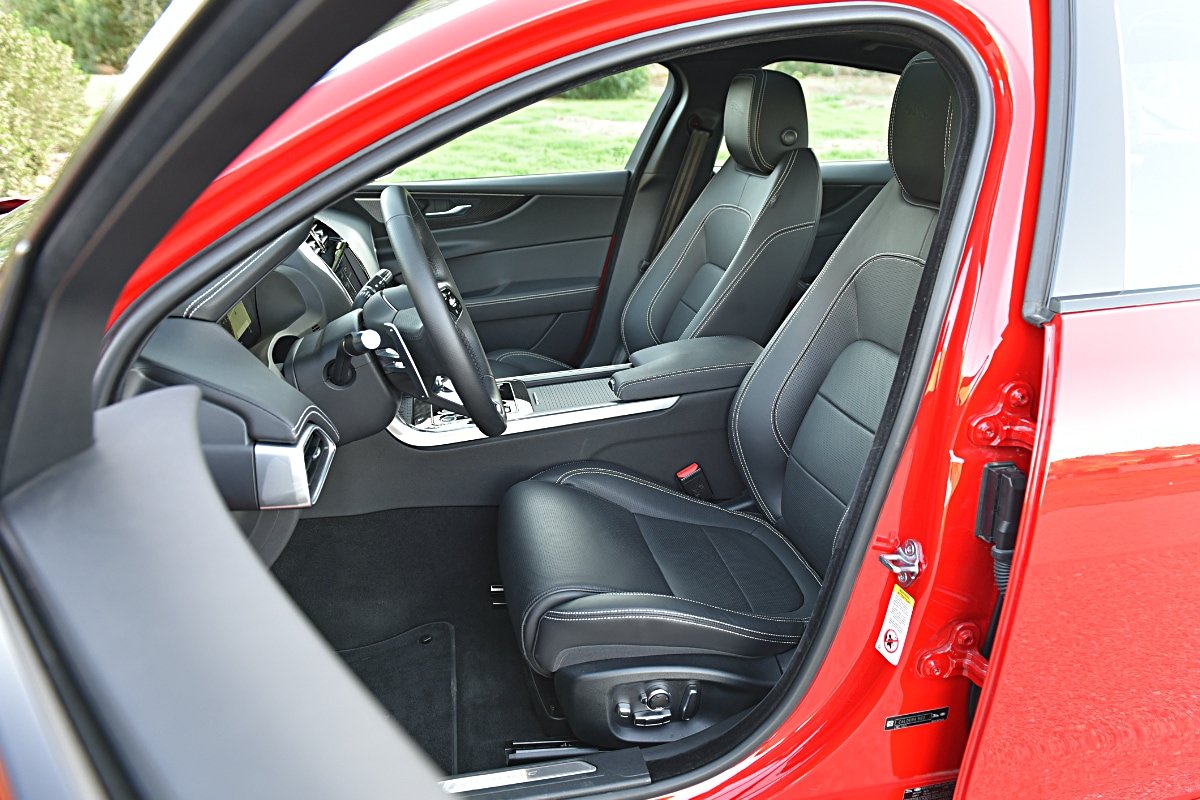 You’ll be happier owning a Jaguar XE if you think of it as a coupe with a couple of extra doors, along the lines of a Mercedes-Benz CLA. That’s because this car is a snug fit, especially for people relegated to the backseat, where Jaguar supplies air conditioning vents and, oddly, a 12-volt power outlet instead of USB ports.

Up front, the P300 R-Dynamic S’s new seats hold you securely in place whether you’re taking a corner or not. But the embrace is a comforting one, especially given the car’s premium leather, heated and ventilated cushions, and 16-way power adjustment.

For the most part, the controls are conventionally laid out, though the infotainment system and the digital instrumentation do take some getting used to. For 2020, the previous rotary dial gear selector is replaced by a proper lever, and Jaguar says it has improved storage space. That might be true, but the company didn’t improve it enough.

The XE's trunk is mighty tiny, too. It measures 12.1 cubic feet, but its shape is limiting. Try as I might, I could not fit two of my family’s full-size suitcases into the cargo hold. Mix and match a variety of luggage pieces, and it might work for an extended road trip. 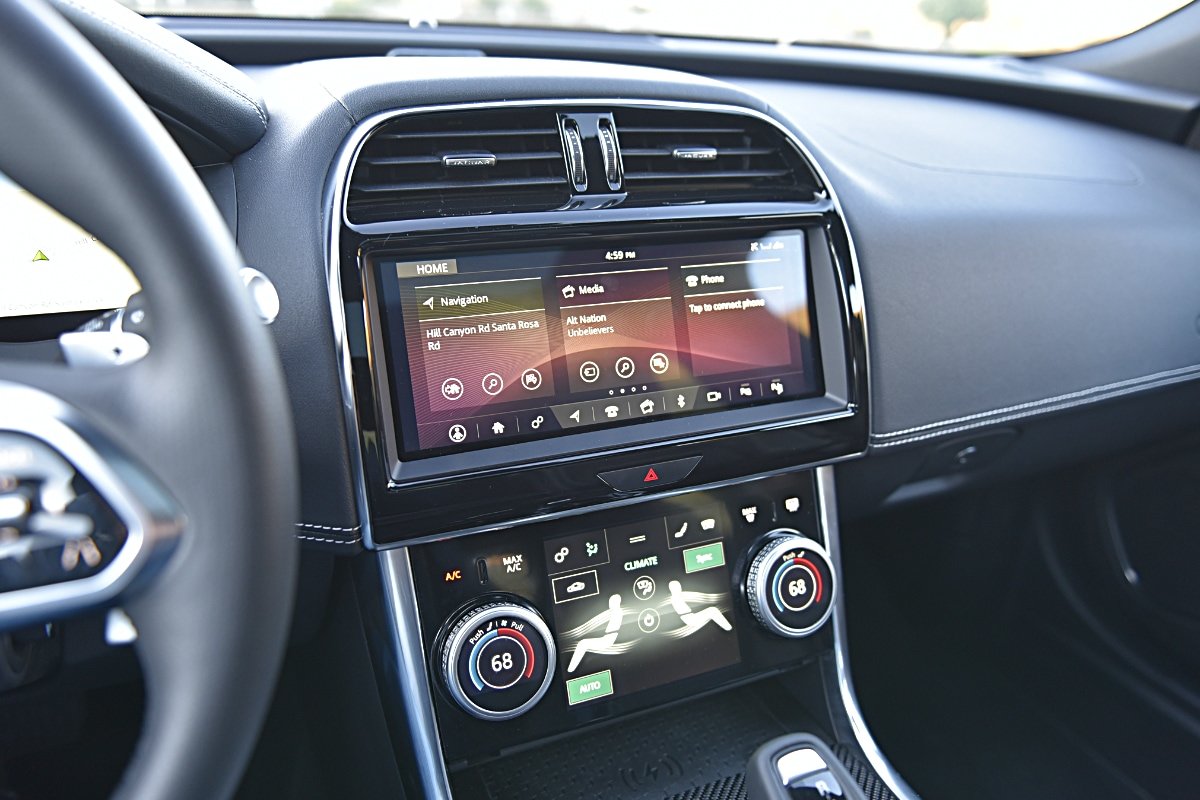 Jaguar offers the latest version of its InControl Touch Pro Duo infotainment system in the 2020 XE, and it works better than previous iterations of the technology. But it remains a work in progress.

Specifically, it lacks a natural voice-recognition system that would make using it much easier. Over time, you’ll learn the right verbal prompts and menu pathways, but it’s been nearly a decade since Apple debuted Siri, and people now expect the same level of sophistication in their vehicles.

Of course, you could just use the Jaguar XE’s Apple CarPlay or Android Auto smartphone integration, but that doesn’t allow for changing radio stations or adjusting cabin temperature.

Beyond this, InControl Touch Pro Duo takes its sweet time to load after the car has been sitting for a while. Both sun glare and fingerprints are problematic, and I have trouble identifying the tiny icons on the small virtual buttons, which are difficult to use in the sometimes stiff XE.

Moving on, the XE’s available 12.3-inch digital instrumentation impresses, though the menus are occasionally tricky from a user-experience perspective. Jaguar employs a creative solution with the climate controls, providing round dials that you twist to adjust the temperature, push to access the heated and ventilated front seats, and pull to manually control fan speed.

For 2020, the XE is the first Jaguar equipped with a wireless smartphone charger. The car also gets a ClearSight rear-view mirror option that solves the lousy rearward-visibility problem with a video feed shown on the mirror’s display. 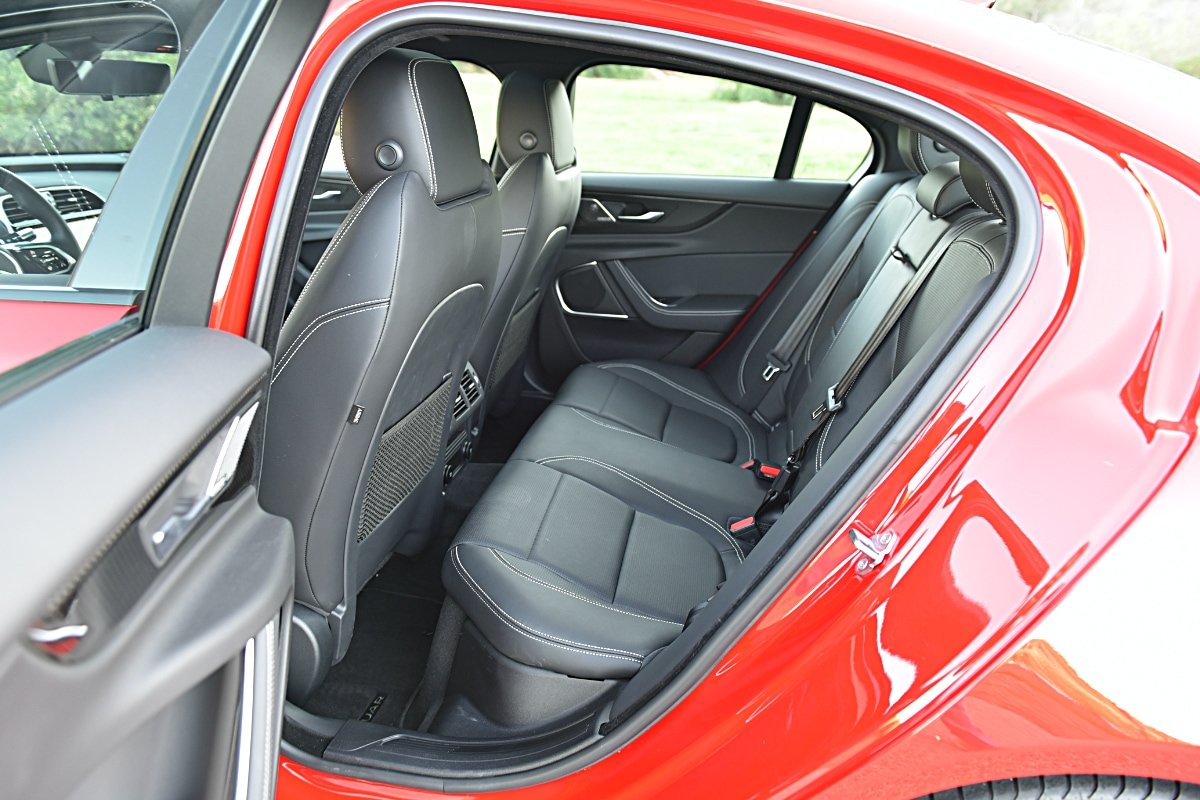 Don’t look for any crash-test ratings for the XE. Neither the National Highway Traffic Safety Administration (NHTSA) nor the Insurance Institute for Highway Safety (IIHS) has tested the car. It's best to hope the advanced driving-assistance systems (ADAS) will prevent a collision from happening in the first place.

Blind-spot monitoring and a 360-degree surround-view camera are stand-alone options. Or, if you upgrade the car with the Park Pack and the Drive Pack, Jaguar will install blind-spot monitoring plus adaptive cruise control, high-speed automatic emergency braking, rear traffic monitoring, and semi-autonomous parking assistance.

During testing, I found the adaptive cruise control and lane-keeping assist systems in need of further development. The latter had trouble identifying moderately faded lane markings, and even when the paint was fairly clear, system performance proved inconsistent.

As for the adaptive cruise, it reacts too strongly when the XE catches up to slower traffic or when other cars cut into the gap ahead. This is a problem because motorists following the Jaguar, especially people sitting up high and looking farther ahead than the XE, don’t expect a typical driver to react in this way. Also, sometimes the cruise control would not initially engage for whatever reason, only to do so after repeated attempts.

In comparison to the best ADAS systems in the marketplace, these fail to impress. 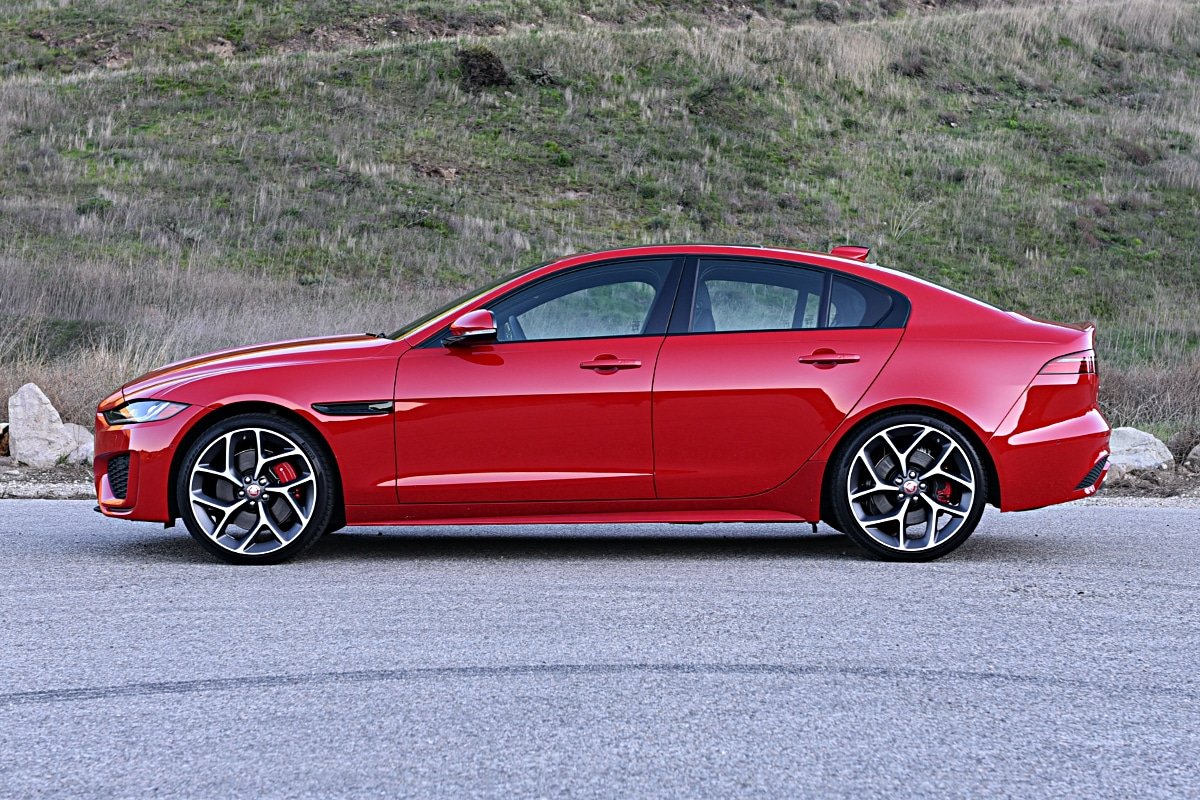 If you're shopping for a Jaguar XE, CarGurus recommends the P250 S unless you’re a driving enthusiast. In that case, you want the P300 R-Dynamic S with Dynamic Handling Pack.

Either way, once you configure a 2020 Jaguar XE with metallic paint, a nice set of wheels, the best seats and grade of leather, the mid-level Meridian sound system, and the high-tech instrumentation and infotainment systems as well as the ADAS, you’re spending at least $52,000 for a P250 S with RWD.

That’s a substantial wad of cash for a car of this size. Jaguar sweetens the pot with its Elite Care warranty, roadside assistance, and free maintenance programs, which simultaneously address reliability concerns in a customer leasing the XE, but this still doesn’t spell value in comparison to, say, an Audi A4 45 TFSI Prestige or a Genesis G70 2.0T Sport.

No, the Jaguar XE is not a value play. This car is for people who love the looks and don’t want to drive the same Audi, BMW, Lexus, or Mercedes-Benz that everyone else has in their garages. Think of the target XE customer as a conforming non-conformist seeking the prestige of a known brand but not the commonality of the A4, 3 Series, ES, or C-Class.

In any case, if you can accept the Jaguar XE’s quirks, this is a good compact luxury sport sedan in which to distinguish yourself from the crowd.

Erich If you are a driving enthusiast you don't buy this car.

Users ranked 2020 Jaguar XE against other cars which they drove/owned. Each ranking was based on 9 categories. Here is the summary of top rankings.

Have you driven a 2020 Jaguar XE?
Rank This Car

some idiot knocked my wing mirror in passing...would this have ruined my car speaker connections?