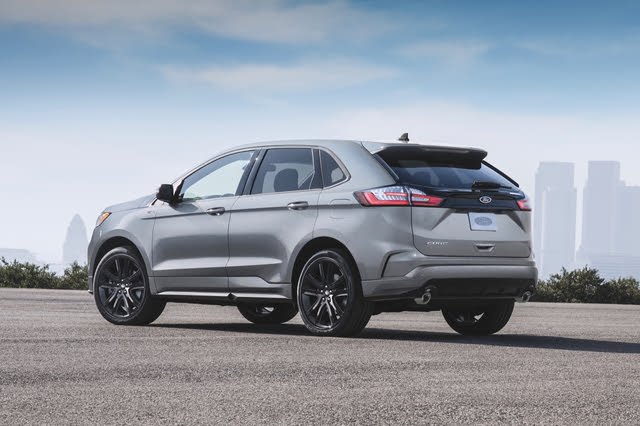 Looking for a New Ford Edge in your area?

Average user score
5 ⁄ 5 stars
Based on 10 reviews
Review by Guru9YBG6J — I owned an Edge in 2010 and traded it in for an Explorer for more space for grandkids. Although the Explorer is great for that I missed my Edge. Keeping Explorer but getting back to the Edge for d... Read more
Review by Floyd — This car is great!! It has everything. Missing nothing. It was a special order car. Not many like this!! The value was excellent. Very pleased. Read more
Review by Guru9YRHKN — It has everything. Still learning all its capabilities. Also has good gas mileage. Read more

The Ford Edge is showing signs of age in its design, but makes up for it with plenty of standard tech and safety features. 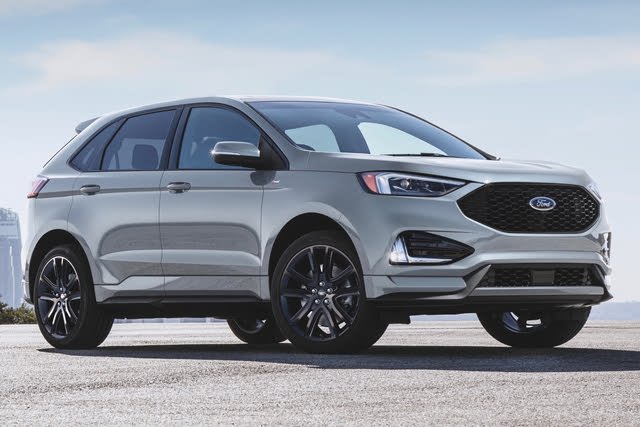 The Ford Edge isn’t exactly memorable, which isn’t a bad thing. It isn’t a good thing either. Cars can be remembered for attractive design, fun driving dynamics, or being a solid value. They can also be remembered in a negative light for a polarizing design, poor build quality, or being unsafe to the point of scandal. But the 2020 Ford Edge is just... there. It is a midsize two-row SUV that doesn’t offend, but also doesn’t “wow.” But just as critically, the Edge is getting long in the tooth. In the SUV segment, constant iteration is necessary for survival, and the Edge is in need of a redesign.

But in lieu of new blood, Ford has done well to keep the Edge fitted with the latest infotainment and safety technology. It also offers a performance variant, called the Edge ST. This is something that you won’t find in the Edge’s competitors, the Nissan Murano and Honda Passport. But is it enough to keep the Edge relevant against its more contemporary rivals? Read on to find out. 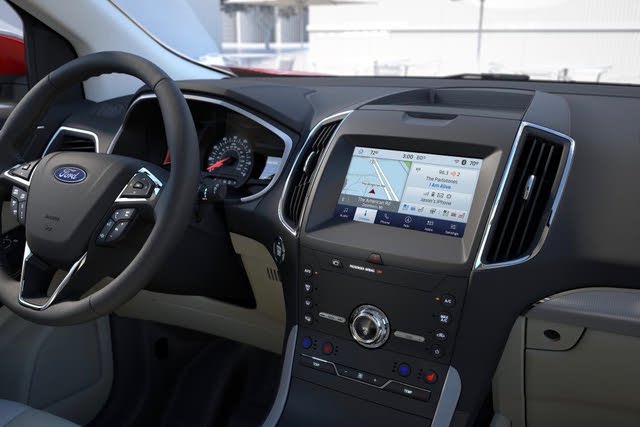 The Ford Edge was first introduced in 2006 for the 2007 model year. At the time, automakers were still figuring out this whole crossover SUV thing. The Edge was and still is based on the same platform as the Ford Fusion sedan, which provides a car-like ride and plenty of cabin space.

The second generation of the Edge arrived for the 2015 model year and received a styling update for 2019. Ford was wise to keep the styling fresh, but it was just a few years too late. Rivals like Honda and Toyota completely redesign vehicles about every six years, with a mid-cycle refresh every three years. Ford is behind schedule and is about to get blown out of the water by the reintroduction of the near-luxury Toyota Venza crossover.

The 2019 styling update, which carries over to 2020, does give the Edge the impression of being a crossover version of the Fusion. It shares the angular headlights and large, trapezoidal grille of the sedan. Inside, the Edge shows signs of its age. The overall layout is the same as it’s been since 2015, with subtle changes from 2019. The center console has small climate and radio controls, and the buttons are arranged very awkwardly. The rotary shifter is a contemporary design cue for Ford vehicles and does solve some space and packaging issues.

The cabin quality is pretty good. There are plenty of soft-touch materials used and fit-and-finish is solid. But these efforts are largely negated by the heavy use of hard plastics, including the plastic panels that make up the center console and center stack.

The ST is the performance variant of the Edge. It has nearly all the same features as the Titanium but adds a bigger, more powerful, engine, standard all-wheel drive (AWD), and sportier styling. 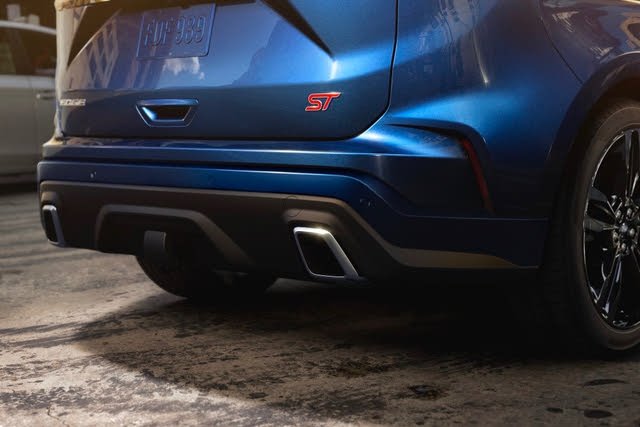 The 2020 Ford Edge comes standard with a 2.0-liter turbocharged four-cylinder engine. It makes 250 horsepower and 275 pound-feet of torque. Power is routed to the front wheels or available all-wheel drive through an eight-speed automatic transmission. This engine provides solid low-end acceleration that is great for getting around town. At higher speeds, it has a harder time finding power, but it is adequate for accelerating onto the highway.

The Edge is designed with American roads in mind. The suspension soaks up potholes with ease, yet it is not overly cushy. It smooths out road imperfections, but is refined and can be engaging to drive.

If you want more speed or are seeking an even more engaging driving experience, look to the sporty Ford Edge ST. This performance variant of the Edge is the only trim with the 2.7-liter EcoBoost V6 powertrain. It sends 335 horsepower and 380 pound-feet of torque through an eight-speed automatic to standard AWD.

Acceleration with the ST is almost an inverse of the rest of the lineup; it has a bit of turbo lag at low speeds, but once the revs get up, the ST has plenty of power on tap. The steering is heavy like you would expect in a performance car, and cornering is fantastic. The Edge ST handles like a car half its size. A Sport mode enhances the driving experience with the push of a button, livening up the throttle response and automatic-transmission mapping. It also alters the instrument panel to present critical performance information. An ST Performance Brake Package is available. It includes unique wheels, summer performance tires, and upgraded performance brakes. 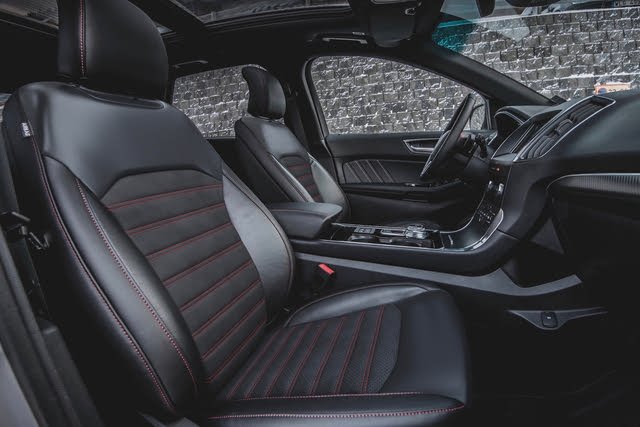 Aside from its driving characteristics, the Edge’s strongest suit is its cabin layout. You have a commanding view of the road without being overly upright. The seats are surrounded by plenty of cubbies and compartments, and everything is big and deep, designed for commuting or road trips. This is an American SUV designed for Americans.

Second-row head- and legroom are plentiful. There’s no need to move the front seats forward to make the rear seats comfortable. It may not offer a third row, but Ford made sure the two rows that are provided are spacious and comfortable.

The Edge provides 39.2 cubic feet of cargo space behind the rear seats. By folding the 60/40 split-fold rear seats, that number grows to 73.4 cubic feet. That is more total cargo space than a Jeep Grand Cherokee (68.3) and Nissan Murano (67), though slightly less than that of the Honda Passport (77.9). The SEL and Titanium trims come with a hands-free foot-activated power rear liftgate. 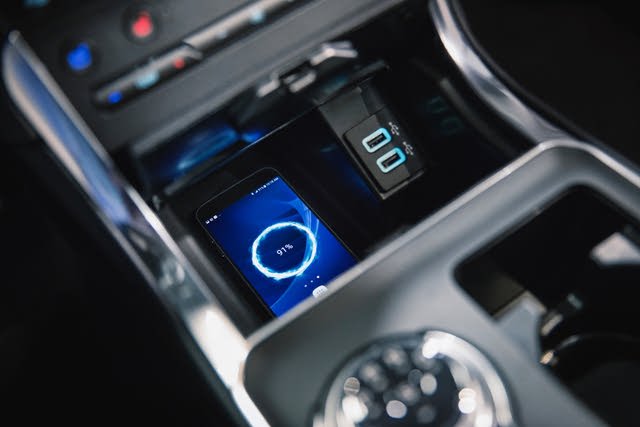 Ford provides an impressive level of standard technology in the Edge. Every trim comes standard with Ford’s SYNC 3 infotainment system. SYNC 3 includes an 8-inch touchscreen and is very easy to use, The screen has a row of icons at the bottom for audio, phone, navigation (where available), apps, and settings across the bottom of the screen. It also provides a helpful home button in the upper left-hand corner of the screen. This means you won’t get lost in menus, or have to press extra buttons to get from a setting screen back to the radio.

SYNC 3 also includes Apple CarPlay and Android Auto integration. This is great because you don’t need to pay extra for navigation if you don’t want to. You can simply use your preferred maps app on your mobile device. A voice-activated navigation system with pinch-to-zoom map control is optional on the SEL and ST. It is standard on the Titanium. This navigation system also includes SiriusXM Traffic and Travel Link with real-time traffic updates. This is a subscription service, but the Edge comes with five-years pre-paid.

The Edge comes standard with two smart-charging USB ports. A semi-digital instrument panel with dual screens is also available on the SEL and ST and is standard on the Titanium. All trims are available with an optional dual rear-seat entertainment system with screens built into the back of the front headrests. 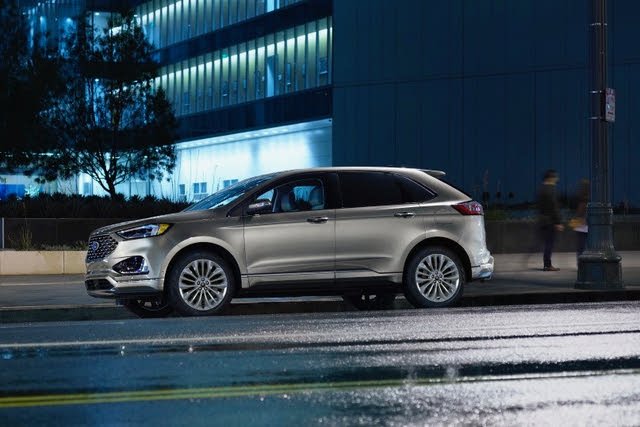 Moving up to the SEL trim allows buyers the option to select the upgraded Co-Pilot360 Assist+ package. This enhances CoPilot360 by adding adaptive cruise control that can stop-and-go with traffic. It also adds active lane centering, which keeps the Edge from veering out of the lane. Together, these features give the Edge some basic form of semi-autonomous driving while on the highway.

The 2020 Ford Edge received a "Top Safety Pick" rating from the Insurance Institute for Highway Safety (IIHS). It got the highest "good" score in all IIHS crash tests, but received "average" and "poor" (depending on trim level) headlight ratings. The Edge also received a five-star overall safety rating from the National Highway Traffic Safety Administration (NHTSA), with five stars in frontal and side crash tests, and four stars in rollover crash tests.

Base MSRP for the 2020 Ford Edge is $31,100 for the FWD SE trim. An SE with AWD starts at $22,095. The SEL trim starts at $34,355, while the Titanium starts at $38,100. A range-topping ST trim starts at $43,265. The Nissan Murano and Honda Passport have nearly identical starting prices, and the Jeep Grand Cherokee costs just a hair more. CarGurus recommends checking out the SEL trim, as it offers the right amount of content for the right price. A fully loaded ST trim with options can cost as much as $48,000.

The Ford Edge gets outpaced by many other midsize SUVs. The Grand Cherokee is more capable, the Passport is more versatile, and the Murano is more upscale and comfortable. But the Ford Edge plays the “jack-of-all-trades” card well. It doesn’t beat any of these rivals in any one phase, but the combination of attributes makes the Edge a versatile, well-equipped SUV.

Have you driven a 2020 Ford Edge?
Rank This Car

Enter your zip to see incentives for a new Edge in your area.

When trying to start my vehicle I get a message that says "To start turn off battery saver mode". The vehicle will eventually start after two or three attempts. I have not been able to figure out wh...

I recently purchased a 2020 Ford Edge. I am only inclined to use the stop-start feature at traffic lights in my neighborhood I know are long. However, the engine always starts back up after 40 secon...

What If A Dealer Does Not Honor Your Price?

I have contacted a dealer about a vehicle, and they don't want to honor the price they advertised on your site. What are my options.

What To Do When Dealer Does Not Honor Price Listed On Your Site?

I have contacted a dealer about a vehicle, and they don't want to honor the price they advertised on your site. What are my options?