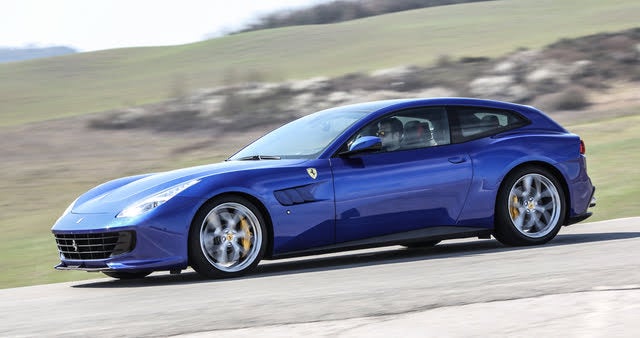 A Ferrari SUV is not too far off in the future, but for now the closest thing to a family car in the Ferrari lineup is a four-seat hatchback with a mouthful of a name: GTC4Lusso. Initially called the FF, it got an update in 2016 with cleaner looks and its current name. Ferrari further broadened the GTC4Lusso’s appeal in 2018 with a “T” model with a smaller V8 engine rather than a massive V12 and with rear-wheel drive (RWD) instead of all-wheel drive (AWD). Both the GTC4Lusso and GTC4Lusso T sell in small quantities, and they get no major changes for 2020. Both are fast, handsome, rare, and reasonably practical.

Under the long hood of the GTC4Lusso T is the 3.9-liter twin-turbo V8 similar to the one found in the Portofino retractable hardtop. It makes 602 horsepower and 560 pound-feet of torque, which is nearly 80 fewer horsepower but equal torque compared to the V12 in the standard GTC4Lusso and still enough to get this hefty hatchback from 0-60 mph in just 3.5 seconds. That’s just a tenth of a second behind the V12. Its 199-mph top speed is also 9 mph short of the V12's, but those are 9 mph that few drivers will ever miss.

Ferrari’s familiar 7-speed dual-clutch automatic with paddles does the shifting, and power goes to the rear wheels only, rather than all four as in the 12-cylinder version of this car. The smaller displacement and the RWD result in better fuel economy for the GTC4Lusso T, but it still manages just 17 mpg combined.

The smaller engine and simpler drivetrain also translate to over 120 pounds in weight savings compared to the 12-cylinder car, and Ferrari aimed for a lighter and sportier feel with the T. It does, however, still have a 4-wheel steering system, magnetorheological dampers, and Side Slip Control.

The inside of the GTC4Lusso T is typical Ferrari, with a large central tachometer in front of the driver, a manettino drive-mode selector on the steering wheel, and lots of leather. Buyers can choose from numerous interior hues, and tasteful amounts of carbon and aluminum trim are prominent throughout. A 10.25-inch infotainment screen sits in the middle of the dash, and an extra information display that sits in front of the front passenger is available. A glass panoramic roof is another tempting option. The T has room in back for two adults, and the rear seats fold down for a usable cargo area.

With good visibility, four seats, and ample cargo room, the GTC4Lusso T is maybe the most livable new Ferrari day to day. It’s also nearly identical to the V12 AWD version and offers nearly as much performance, but costs thousands less and will use less fuel.

Have you driven a 2020 Ferrari GTC4Lusso T?
Rank This Car