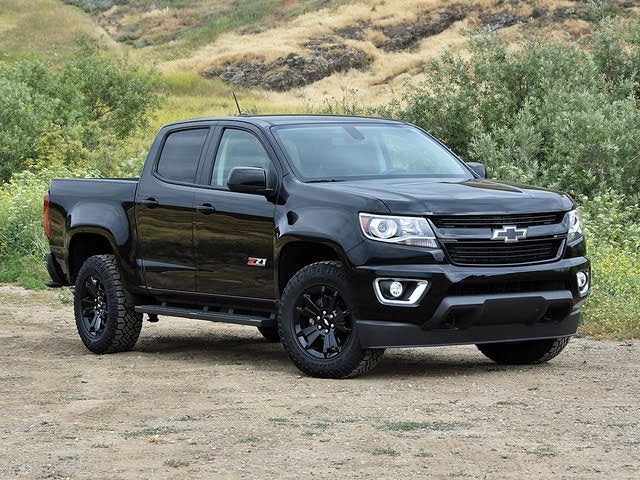 Small trucks are making a comeback. Thanks to their more manageable proportions and inherent pickup utility, midsize trucks, like the 2020 Chevrolet Colorado, prove their worth to truck buyers who don’t need a big, lumbering, full-size truck. For 2020, the Colorado gets more standard and optional features across the lineup.

The Colorado is available in three bed and cab configurations. There’s an extended cab with rear half-doors and seating for four, which comes with the 74-inch long bed. The crew cab has four full doors and seating for five. You can get that with the 61.7-inch short bed as well as the aforementioned long bed. No matter the configuration, the Colorado comes with helpful bed steps.

Colorado shoppers can select from one of three engines, depending on trim. The base engine is a gas 2.5-liter 4-cylinder engine, making 200 horsepower and 191 pound-feet of torque. The most popular engine is the 3.6-liter V6, which makes 308 hp and 275 lb-ft. Chevy also offers the Colorado with a Duramax Diesel engine. This 2.8-liter turbo diesel 4-cylinder engine makes 181 horsepower and 369 pound-feet of torque.

If you’re more into off-roading than towing, the ZR2 is for you. Available with either the V6 or turbo diesel engine, it adds a 2-inch lift and an overall track that’s more than three inches wider than the standard Colorado. The ZR2 also adds upgraded off-road bumpers, 31-inch off-road tires, underbody shielding, and electronically locking front and rear differentials.

The most efficient configuration of the Colorado is the turbo diesel with the 6-speed automatic transmission and rear-wheel drive (RWD), returning 20 mpg city, 30 highway, 23 combined. The least efficient setup is the ZR2 with the gas V6, 8-speed automatic, and 4-wheel-drive. It returns V8-like fuel economy of 16/18/17.

Trims for the Colorado include Base, WT, LT, Z71, and ZR2. The Base trim comes with few creature comforts, but it does include a 7-inch touchscreen with Apple CarPlay and Android Auto as well as two USB ports, Bluetooth connectivity, and six speakers. One step up from the base trim is the Work Truck, shortened to WT. The V6 engine is available along with other options, like a rear locking tailgate. The LT is where you start to find additional features, such as a WiFi hotspot, two additional USB ports, HD radio, satellite radio, and a larger 8-inch infotainment touchscreen.

The Z71 has long been a designation for more off-road-oriented trims. In addition to some upgraded chassis equipment, it adds remote start, a heated steering wheel, automatic climate control, front and rear parking sensors, and wireless device charging. The range-topping ZR2 adds even more off-road equipment.

There are also a number of special editions of the Colorado. These include the Redline, RST, Custom Edition, Midnight Edition, Dusk Edition, and Midnight Special Edition.

The Colorado comes standard with a reversing camera, a host of front and rear parking sensors, traction control, and Chevy’s Teen Driver system. The last one allows parents to monitor their teen’s driving behavior, as well as set volume limits for the stereo.

The Chevrolet Colorado is assembled at General Motors’ Wentzville plant in Missouri.

What's your take on the 2020 Chevrolet Colorado?

Guru7HQ8D Is the ZR2 available with a 6 cylinder Diesel engine?

Users ranked 2020 Chevrolet Colorado against other cars which they drove/owned. Each ranking was based on 9 categories. Here is the summary of top rankings.

Have you driven a 2020 Chevrolet Colorado?
Rank This Car

Does Cargurus Still Have Sale Price Of A Vehicle Sold In January?

Does Cargurus keep records of all vehicles that have been listed on their sight? I am looking for a listing from around January 21, 2021. Please help me out.

What Engine Options Are There For The Colorado ZR2

Is the Colorado ZR2 have an optional 6 cyl. Diesel engine?