Looking for a Used XT6 in your area?

Not an Escalade: It’s Cadillac’s first 3-row crossover in a decade. 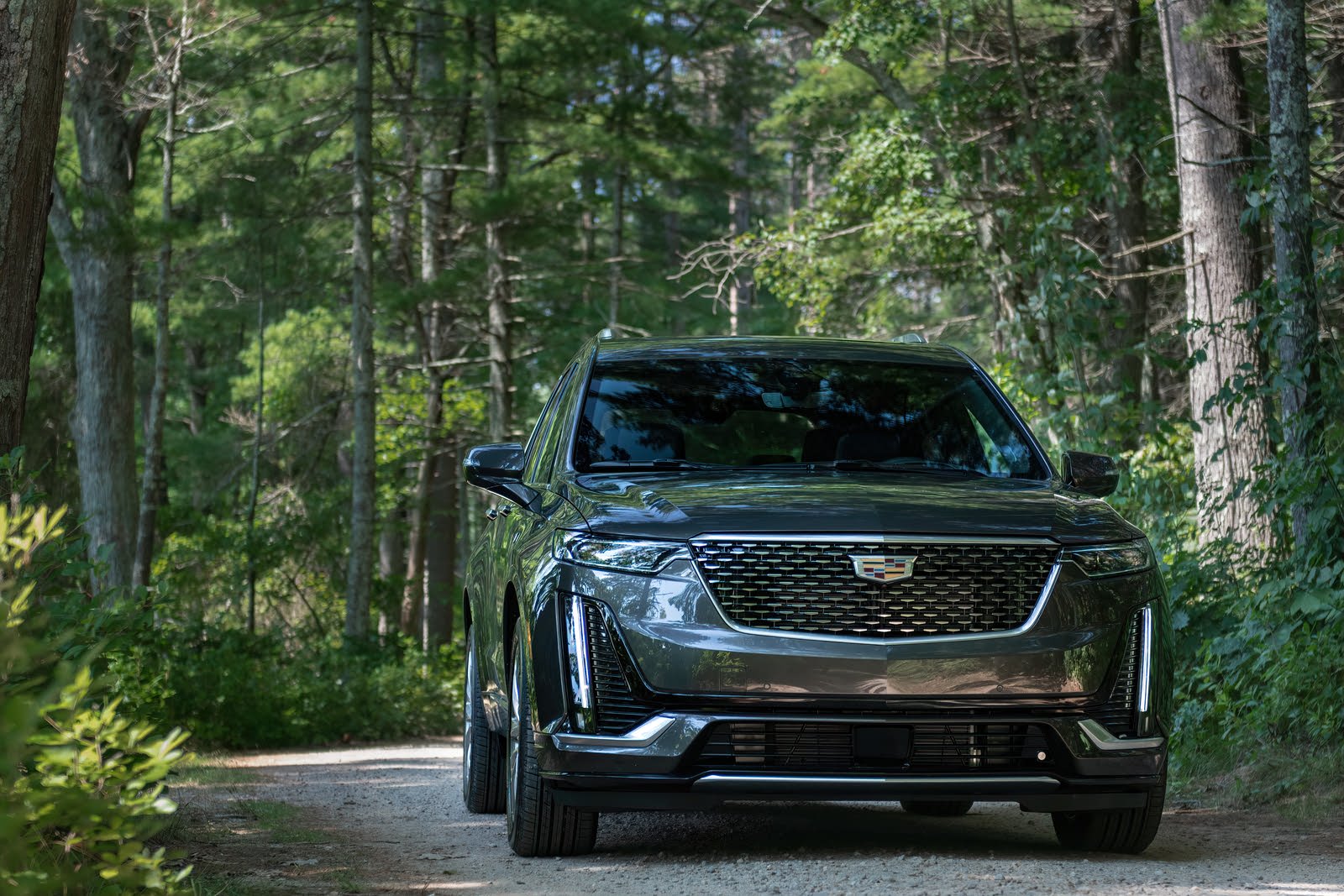 Loaded minivans offer unrivaled space and top out near $45,000, but they don’t have the same presence and style as 3-row SUVs and crossovers from luxury brands. Cadillac is very late to this market, though it’s not inexperienced. The Escalade is a franchise-making name, representing status and power. But not everyone wants to drive the automotive equivalent of the Chrysler Building. The 2020 Cadillac XT6 promises the room and utility of an Escalade with the efficiency and comfort of a smaller car. Unlike other Cadillac models, the XT6 is also priced to move. 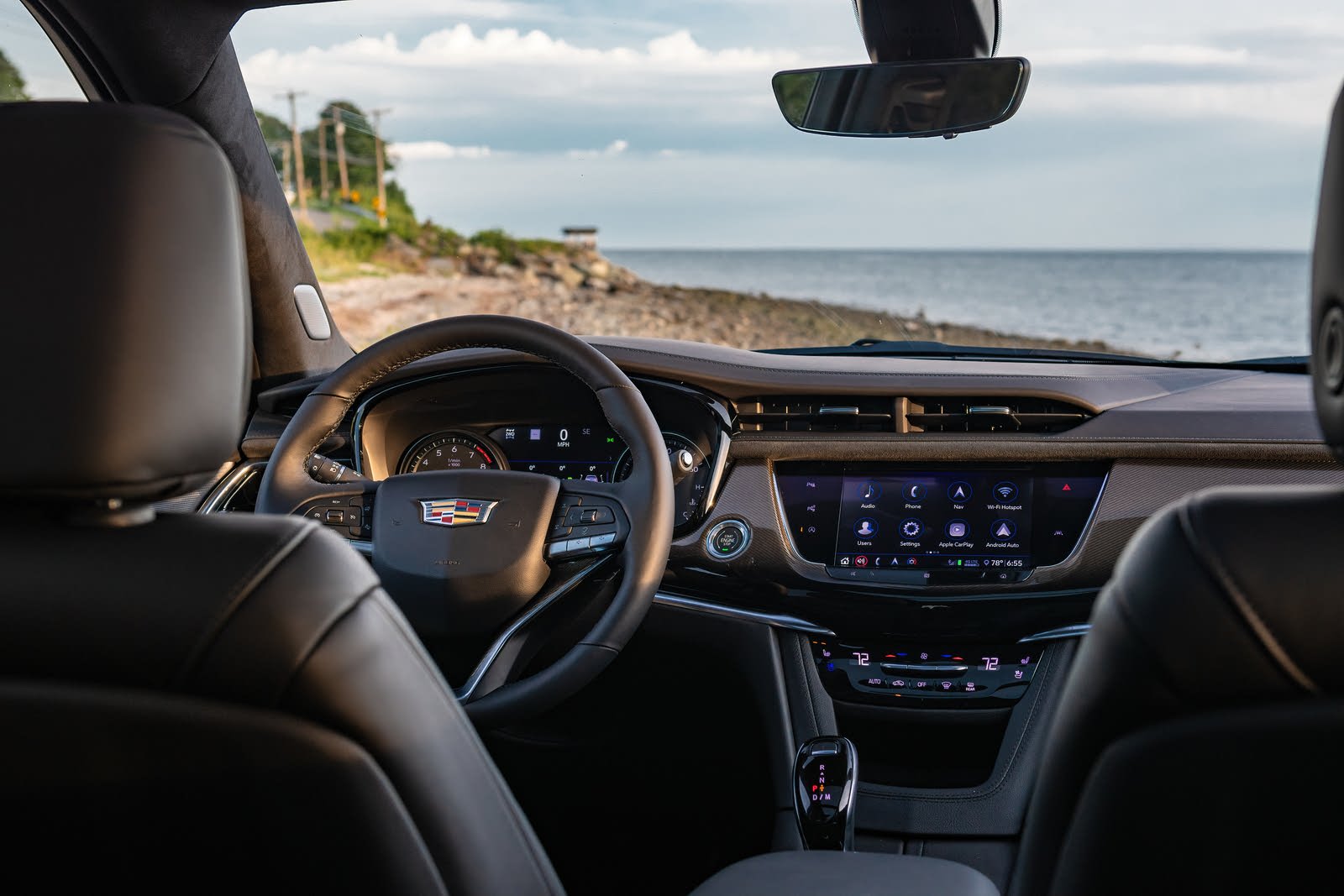 Clean, crisp exteriors are the best parts of modern Cadillac design. The XT6 hides its long, boxy shape underneath a tailored suit. That’s the slimming effect of smooth body panels and limited creases. Without resorting to bright chrome and oversized jewelry, the XT6 features satin-painted silver surrounding the windows and a size-medium silver mesh grille instead of an XL (Cadillac paints the grille black on Sport models). Thin LED headlights and vertical lightsaber-style running lamps and turn signals are the XT6's flashiest bits. Everywhere, the XT6 shows restraint and taste—not so much as to be boring, but to make a lasting style. Even the standard 20-inch wheels don’t look oversized. Other attractive SUVs like the Audi Q7 and Kia Telluride follow this toned-down theme.

Unfortunately, Cadillac doesn’t go for broke on the interior like it should, especially compared to the lavish offerings from Lincoln, BMW, Mercedes-Benz, and Land Rover. My fully loaded Premium Luxury test car had incredibly soft leather, microsuede on the roof and between two pieces of leather on the dash, and gold-tinted carbon fiber trim sweeping across the dash and curving into the steering-wheel spokes. That’s spot on. But the seats are thin, lack support, and look nearly as plain as the chairs in a Chevrolet Blazer. The lower part of the center stack and the entire center console are wrapped in a cheap vinyl, rather than leather. There’s no contrast piping, stitching, or interesting patterns on the seatbacks. The screens are small. Ambient lighting is nonadjustable. The color combos and trim patterns are ordinary. Inside, the XT6 looks like it came out in 2013. Competitors have gone first-class with pampering materials and eye-catching colors. Cadillac makes a good interior, but for a brand-new luxury car, this one’s far from great. 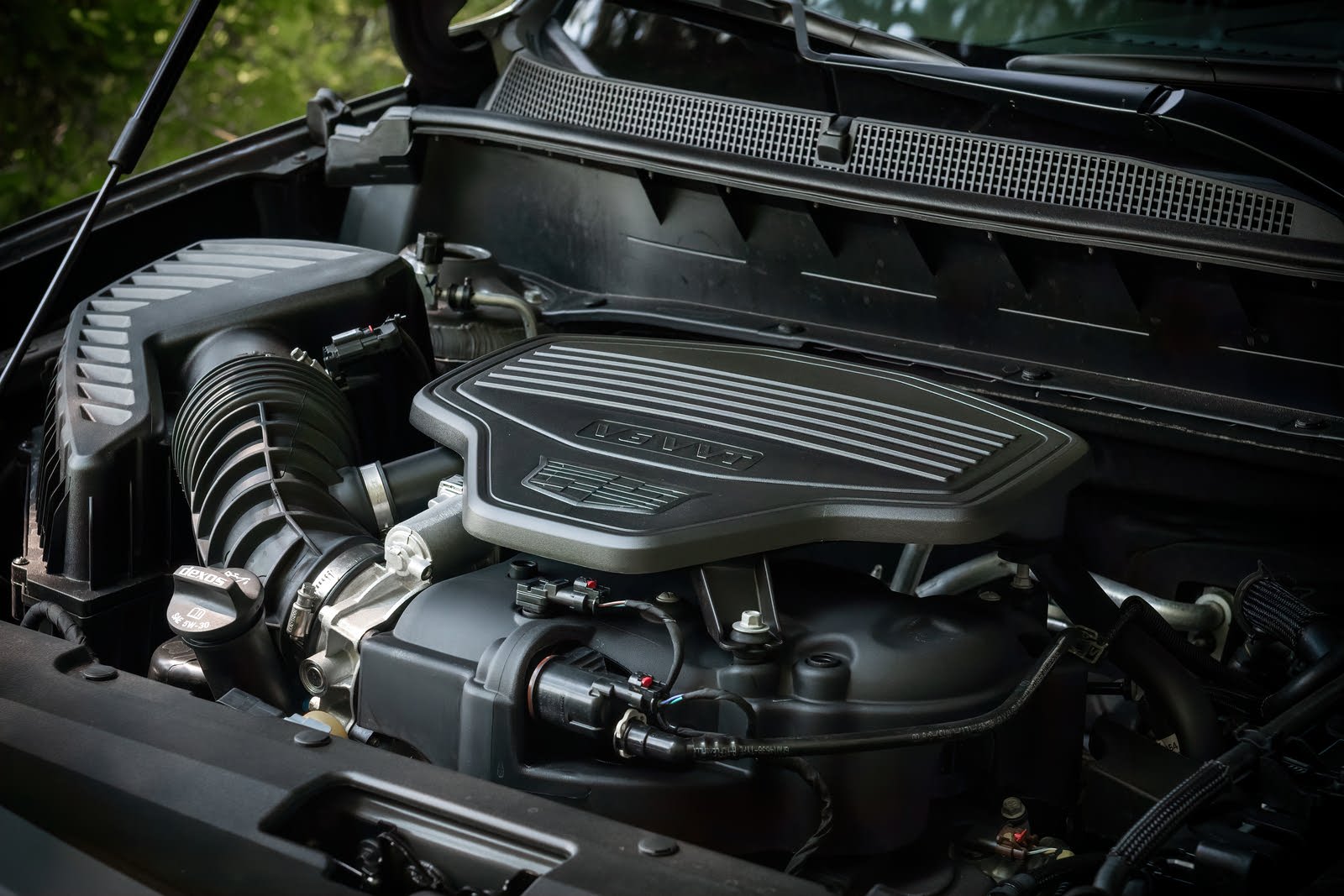 Similarly, the XT6's engine is middling. A 3.6-liter V6 with 310 horsepower and 271 pound-feet of torque is enough to move this big vehicle and tow up to 4,000 pounds, but it’s coarse-sounding, and it's not as responsive off the line as many newer turbocharged V6 engines. Still, it’s peppy enough with the 9-speed automatic transmission’s quick shifts and well-spaced ratios. Front-wheel drive (FWD) is standard, though it’s telling that the new Lincoln SUVs—like those from BMW and Mercedes—are built on rear-wheel-drive (RWD) chassis for better weight distribution.

But with all-wheel drive (AWD) and adaptive dampers, my XT6 felt balanced and controlled over all surfaces, across wide-open highways, and through tight turns. The steering is direct and weighted nicely. It feels a little too loose in the default Tour driving mode, but a switch to Sport gives the helm a more secure feel. Cadillac has nailed steering and suspension tuning in all of its cars, and on a big crossover, that’s no small achievement. While I haven’t driven the Sport trim, Cadillac adds beefier hardware like a mechanical torque-vectoring rear differential, sport-tuned dampers, a faster steering ratio, and larger 21-inch tires. I would like to see Cadillac’s MagneRide dampers as an option. These dampers are so good they were copied by Ferrari—they can alter their compression and rebound within milliseconds. Since many competitors offer height-adjustable air springs, the XT6 deserves a more advanced suspension for buyers willing to pay. The chassis is plenty good for it. So are the brakes, which have a pleasantly firm feel.

Over 400 miles in mixed city and highway driving, I matched the EPA's combined rating of 20 mpg. AWD models have a 17 mpg city, 24 highway rating, while FWD models manage just 1 mpg more in either cycle. This is about par for a large, heavy vehicle. Cadillac is planning a plug-in hybrid XT6, which should improve these figures significantly and improve low-end torque. 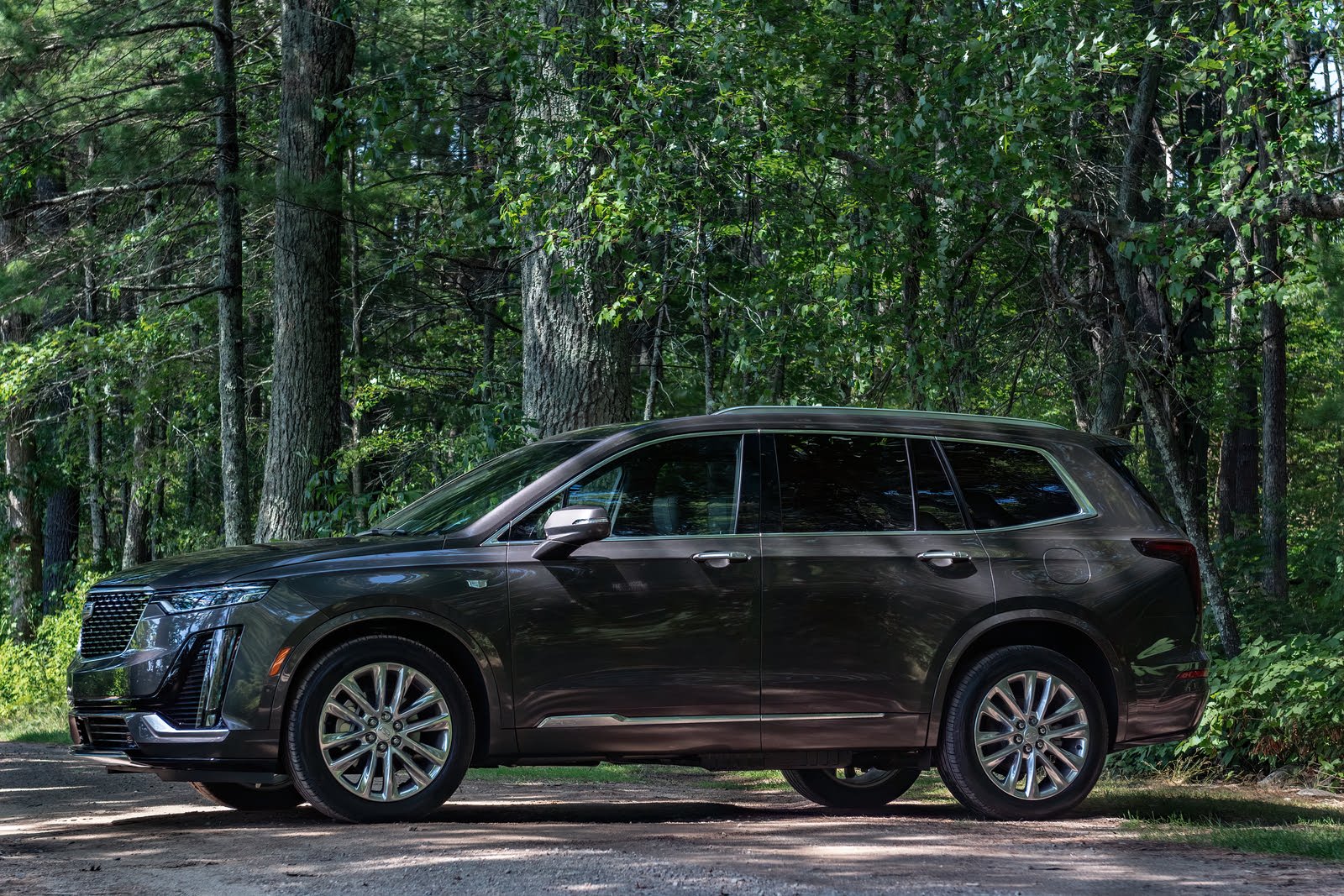 Often when a big SUV advertises space for six or seven people, the last row of seats can fit only children. Thankfully, I can attest that Cadillac has made the back seat in the XT6 livable. The cushion isn’t too low to the ground, so your knees won’t knock you in the face. There’s decent knee room behind the second-row seatback, and it's fitted with USB ports, cupholders, and air vents. It’s not like I’d choose to sit here for hours, but on a short trip, it’s accommodating in ways that other SUVs this size aren’t. The third row power-folds down and up, while the second-row captain’s chairs (or a three-across bench) mechanically drop down from an electric latch. The rear-door openings aren’t as wide as a Honda Pilot’s, so it’s not as simple for a slim guy like me to slip past.

Headroom is good in all seating positions—another impressive feat considering the standard panoramic moonroof extends into the second row. That second row is very spacious. Optional heated cushions and backrests are standard features at this point, as is the 3-zone climate control. When I asked why the XT6 doesn’t come with an intercom between the first and last rows, like you'll find in the Pilot and Telluride, a Cadillac engineer told me the cabin is so quiet that no one needs to raise their voice. I don’t think the XT6 is the quietest in its segment, at least not to my ears, but anyone sitting in the last row of any car isn’t talking to anyone else, anyway. You’re banished to the back, and that’s that.

Total cargo volume measures 12.6 cubic feet with all seats raised, 43.1 with the third row down, and 78.7 with both the second and third rows down. Visibility in all directions is good, and the trick digital mirror that uses a widescreen camera on the back glass is amazing and helps shrink blind spots. The finicky touch-sensitive controls Cadillac had used for climate and stereo are gone. Just a few remain for the hazard lights, volume mute, lane-keep assist, and auto stop-start, but they respond well to input. The instrument cluster with analog gauges, an improved touchscreen infotainment system (without the old system’s slow and awful vibrations in response to each finger press), and an alternative rotary controller with shortcut buttons make the XT6 very simple to operate at speed. Well done, Cadillac. 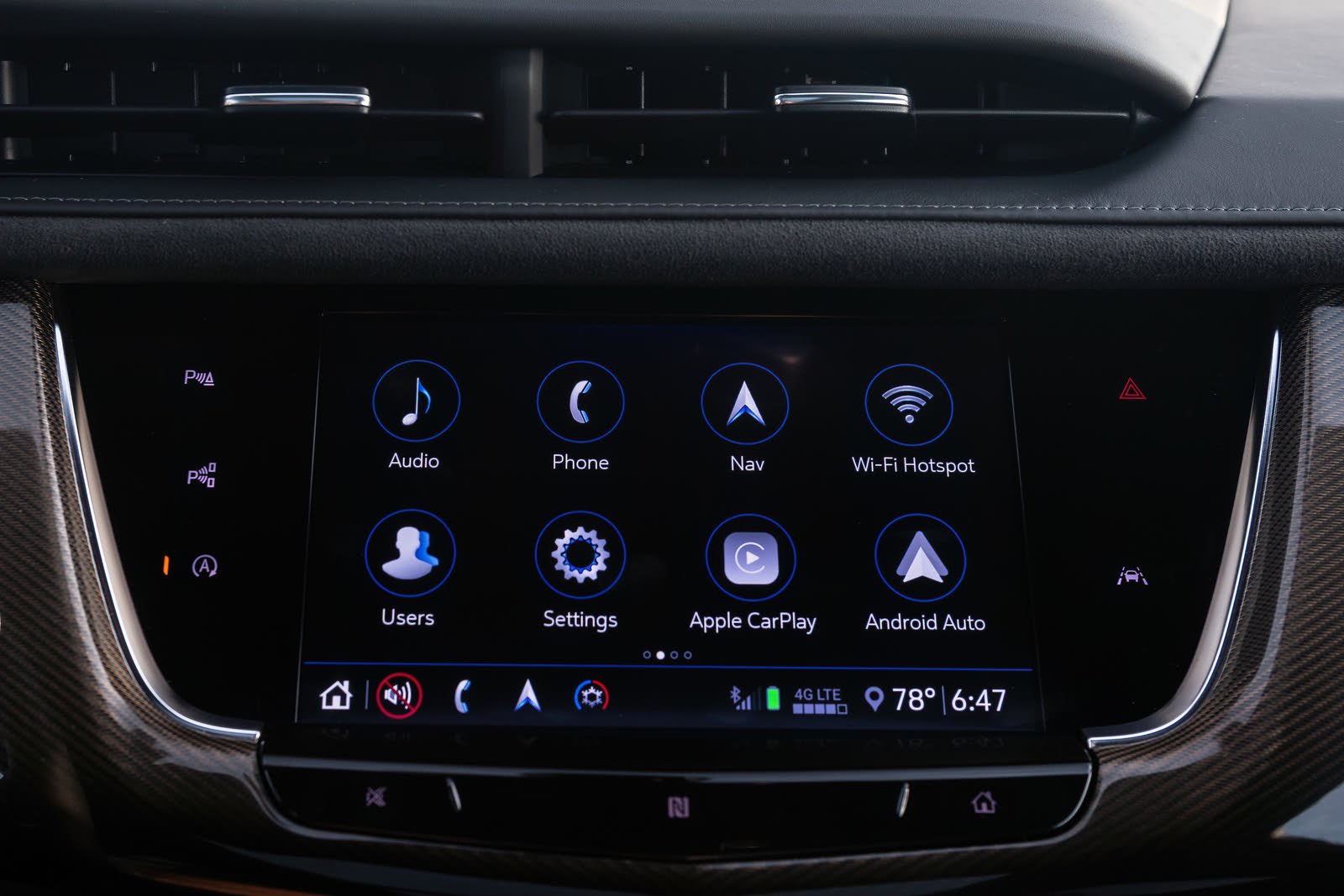 The infotainment system, a minor reskin of the new Chevrolet Infotainment 3, is eons beyond what Cadillac failed to do with its old CUE system. BMW makes the absolute best interface right now, but the XT6 has a fast, intuitive, and easy-to-operate system with cloud-based voice commands and a built-in app store for Spotify, the Wall Street Journal, and a few other approved publications and services. Cadillac will let you store driver profiles that can migrate to any other General Motors vehicle with this feature. Imagine renting a Chevy or driving a friend’s Buick and having your radio presets, seat memory, climate, and other settings immediately at hand. The weird part is the built-in e-commerce app that intends to turn every GM vehicle into a payment station. While automatic payments at the gas pump are potentially intriguing, the best it can currently do is let an XT6 driver order from Domino’s, Dunkin’ Donuts, Applebee’s, and other chain restaurants. I understand this a beta app that no other car company is offering, but is this really the demographic Cadillac wants to chase?

Apple CarPlay and Android Auto come standard, as do a suite of driver assists including forward emergency braking, pedestrian detection, lane-keep assist, and blind-spot monitoring. The optional 360-degree cameras can record surveillance footage while the XT6 is parked and locked, and play it back right from the screen. But there’s no semi-automated driving features and no Super Cruise, which Cadillac touts on the CT6 sedan as the only true hands-free driving system for certain marked highways. That’s coming later, Cadillac says. But on a brand-new model, it really should be here today.

Optional night vision does a good job of locating pedestrians on sidewalks, and my car’s optional LED matrix headlights ($800) cast the tallest, longest field of light I’ve ever experienced in a car. While matrix technology uses cameras to brighten and darken exact sections of roadway, it’s currently illegal in the U.S. and deactivated on the XT6. Even in normal mode, driving the XT6 on a deserted, completely dark section of I-95 in Connecticut, has convinced me that Cadillac offers the industry’s best lighting.

But without Super Cruise, massaging seats, or a reconfigurable digital instrument panel, the XT6 doesn’t offer all the tech it should in this segment. The mediocre Bose stereo and relatively small infotainment screen don’t fill the space like they should, either. 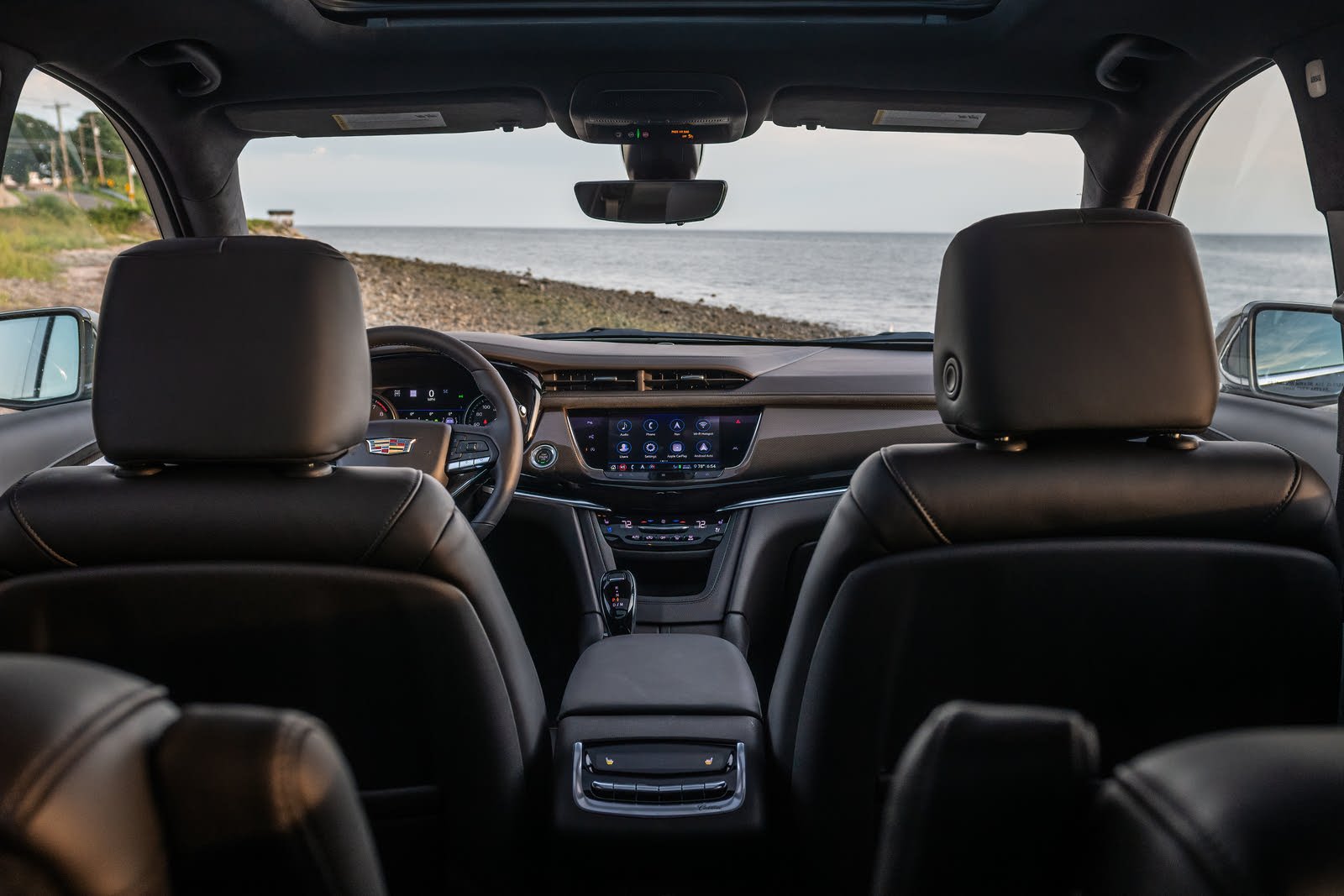 Neither the National Highway Traffic Safety Administration (NHTSA) nor the Insurance Institute for Highway Safety (IIHS) has crash-tested the 2020 XT6. We expect ratings within the coming year and predict top scores all around. Rear pedestrian detection, the digital rear-view mirror, and 360-degree cameras come with the Enhanced Visibility and Technology Package ($2,350). Forward emergency braking that activates at higher speeds, emergency braking while in reverse gear, adaptive cruise, and seat-belt tightening (the kind that cinches to your body upon startup to create what is supposedly the optimum level of slack) are in the Driver Assist Package ($1,300). 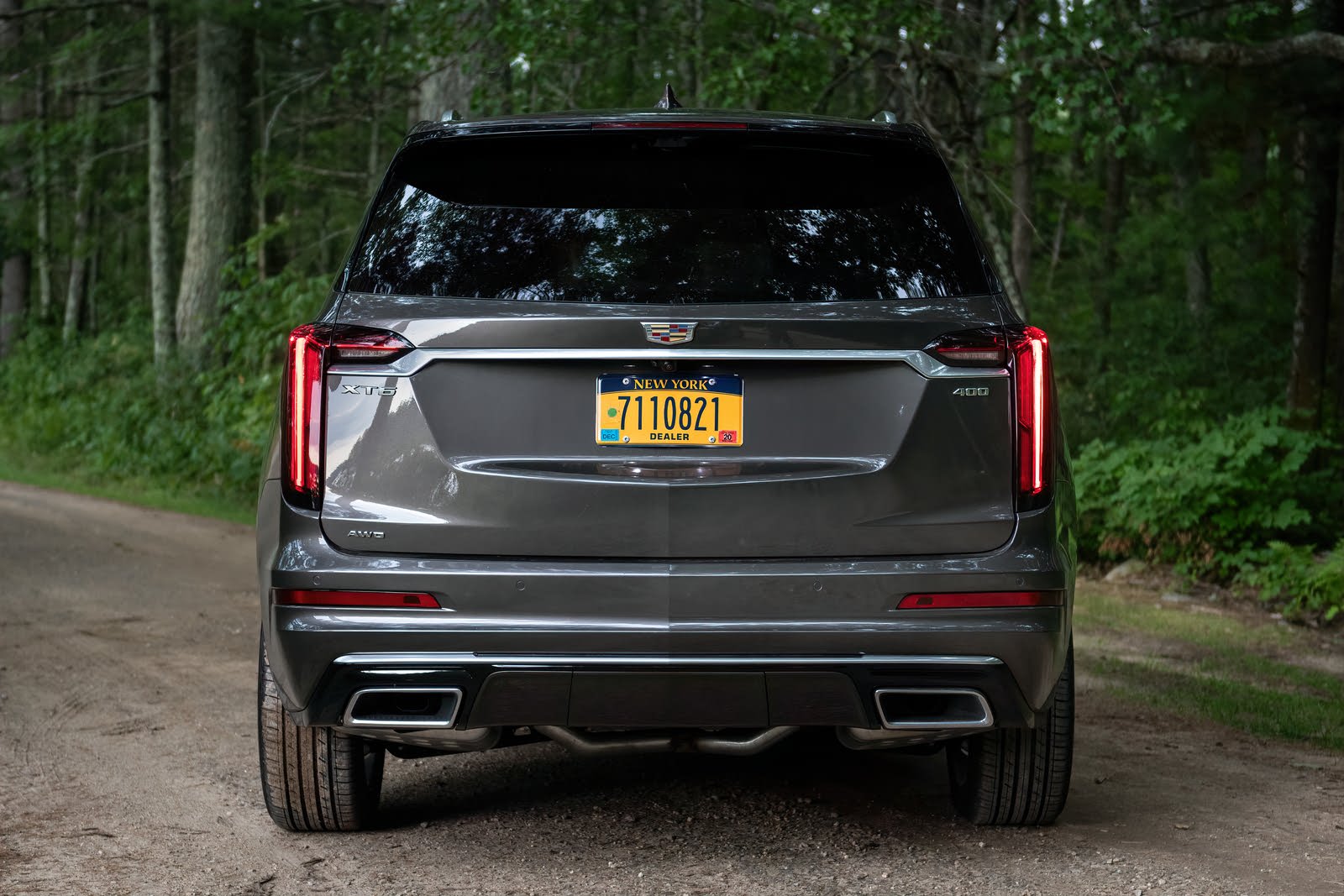 Cadillac includes lots of standard features for a $52,695 starting price. Fully loaded, my AWD Premium Luxury was $70,890 with a $995 destination fee. That may sound like a lot, but next to every competitor with similar equipment, it’s not. You won’t get into a Mercedes-Benz GLS or BMW X7 at that price. The price is spot on next to Lincoln, Audi, Acura, and Infiniti models. But I think the XT6 should be more expensive. My XT6 was the best example Cadillac builds, and it’s not enough to pull my eyes from a Lincoln Aviator. In terms of value for money in the luxury class, the XT6 delivers a lot of car. But the overall feel and performance aren’t special enough. I’d like to see an $80,000 XT6 with true “Standard of the World” trimmings, engines, and attention to detail. Cadillac is getting close, but it's still far from being a segment leader.

Have you driven a 2020 Cadillac XT6?
Rank This Car

Looking for a Used XT6 in your area?

How Do I Get The Car?

Are there extra charges for getting the vehicle to my location? For example the car I like is in Sacramento, CA and I live in Topeka, KS.