Looking for a Used X3 M in your area?

The small luxury SUV that does most everything right. 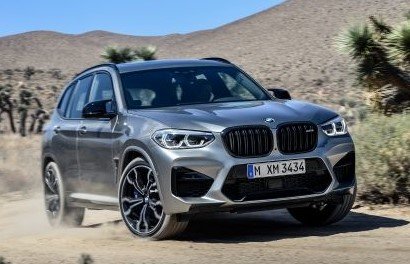 The BMW X3 looks great, drives even better, and has the utility and straightforward design that will still appeal to buyers 10 years from now. Redesigned for 2018, the 2020 X3 brings two new trims aimed at two wildly different customers. One is a quiet plug-in hybrid, and the other is really loud and ends with the letter M. 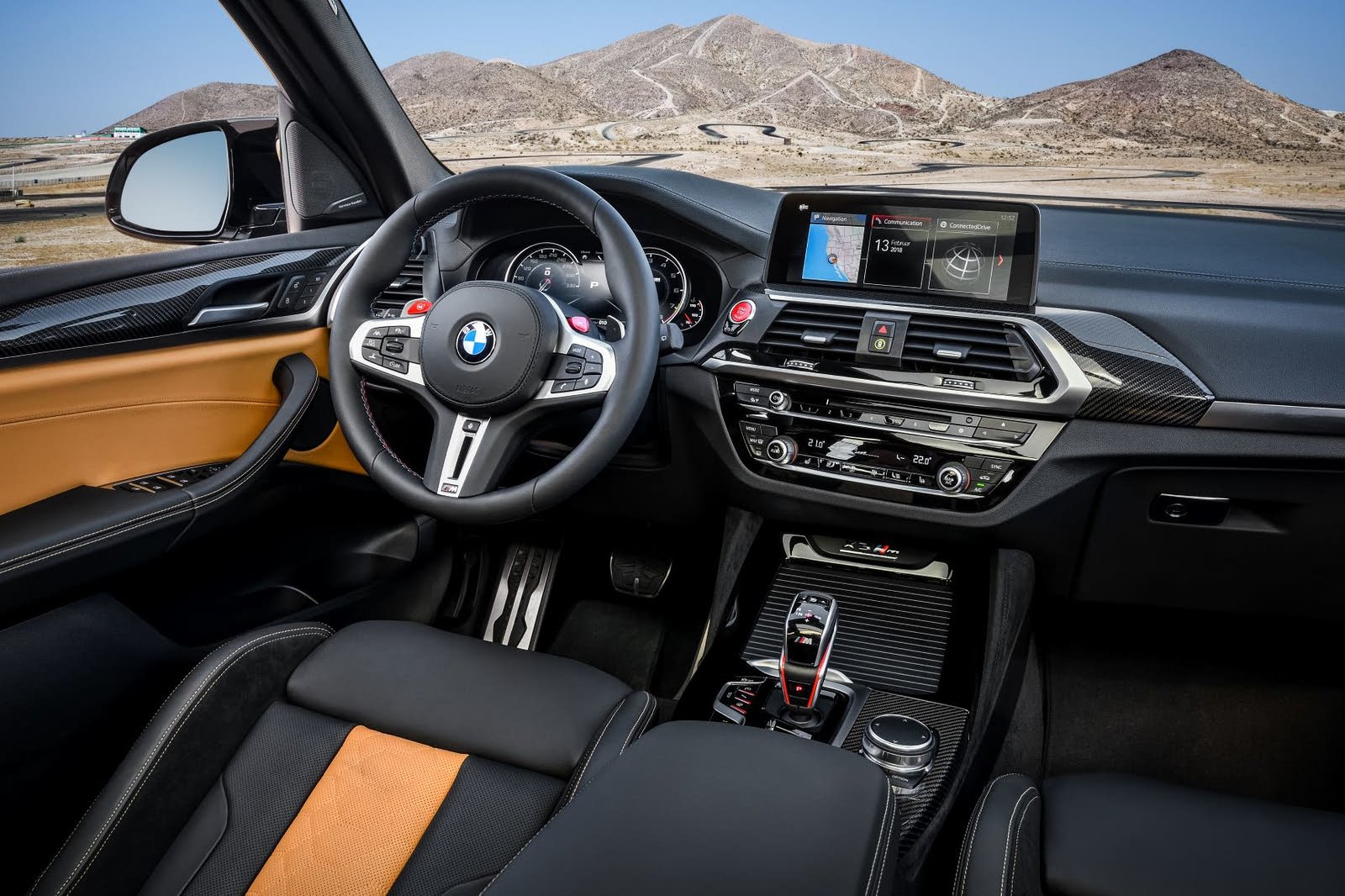 BMW has built attractive SUVs since the mid-90s. Mercedes-Benz has built SUVs for just as long, and aside from the G-Class, there still isn't one that looks as great as a comparable BMW. Let's start with the X3's greenhouse. It's purposeful, as a compact SUV ought to be, with large windows and a tall roof to maximize visibility and space. A mild slope to the hood points to the traditional, instantly recognizable BMW snout flanked by four headlights that are outlined by circular LEDs. Other BMW models like the 2020 7 Series and 2021 4 Series are experimenting with super-tall kidney grilles, but the X3 keeps everything in proportion. On the sDrive30i and xDrive30i trim levels, minimal black body cladding keeps the emphasis on sporty driving, though a few silver-painted plastic extrusions on the door sills and bumpers allude to the metal skid plates of a real, rough and tumble SUV. Choosing the M Sport package removes all those elements for body-color trim, swaps the chrome for polished black trim, and installs a new front bumper with wider air intakes. This style is also the basis for the more powerful X3 M40i model. Even on smaller wheels, the X3 keeps everything in balance.

Not so the new X3 M, which we tested for this review. Engineered by BMW's M division, slammed to the ground on 21-inch multi-spoke wheels, and with black quad exhaust pipes out back and gaping intakes up front, this is essentially the wagon version of the M3 sedan. Side mirrors with aggressive, pointy edges toward the door are another M car trait, along with more blacked-out grille trim and blue brake calipers. Inside, our X3 M had a black and gold quilted leather interior with carbon fiber all over the dash, doors, and center console, plus one-piece bucket seats with hardcore bolstering and illuminated X3 M badges below the front headrests. While this look is M-exclusive, any X3 interior sends the impression of high quality. BMW's look is austere and simple, but don't mistake that for low rent. The X3 and the X3 M performance SUV are both focused more on the driver's comfort and ease of operation, less on showy materials. 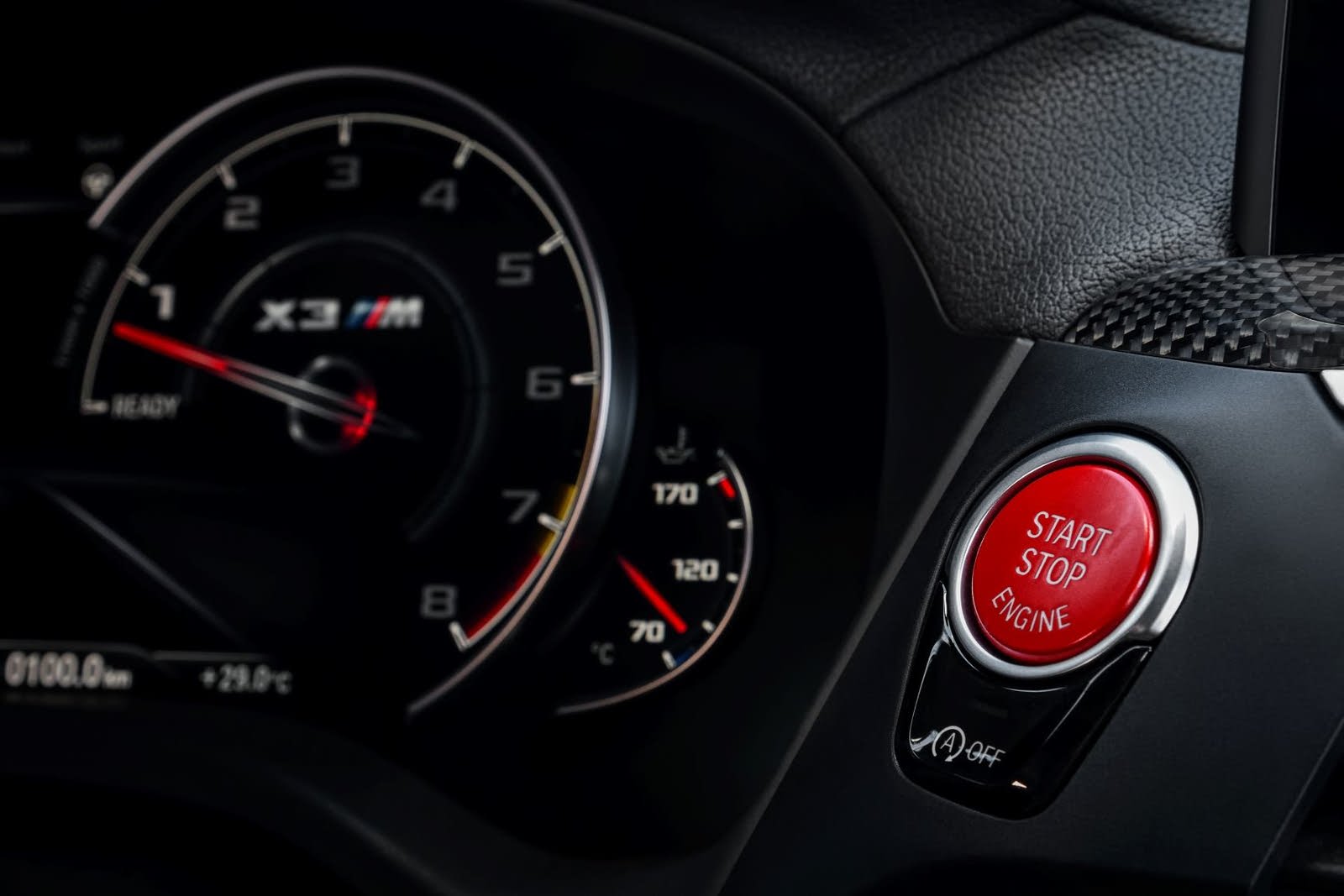 Well, it's obvious that our X3 M Competition was stupid fast from the get-go. The Competition-spec trim packed 503 horsepower and 442 pound-feet of torque from a twin-turbo 3.0-liter inline six-cylinder engine ("regular" X3 M models make do with 473 hp and 20-inch wheels). BMW makes the best engines, and during the peak of quarantine in early April with nearly everyone off the roads, we confirmed this was indeed true. Smooth, sonorous, and always ready to rage, this straight-six and its turbochargers both purrs and roars depending on the dozens of available driving modes. BMW's done more than just add a sport mode to the X3 M. There are three modes each for the engine, eight-speed automatic transmission, steering, and suspension, then another three modes for the all-wheel-drive (AWD) system. Because this is so confusing, BMW has two red preset toggles on the steering wheel to save every last setting.

After visiting BMW's Performance Center near the X3's factory in Spartanburg, South Carolina, we left awestruck that a two-ton-plus SUV could run with the best of BMW's sportiest cars. Designed to compete with the Mercedes-Benz AMG GLC 63 and Alfa Romeo Stelvio Quadrifoglio, the X3 M is track-tuned, with ultra-responsive steering, immense grip, nearly zero body roll when cornering, brakes that stop like boat anchors, and a level of control that feels supernatural in a taller vehicle with a big hatch. An active limited-slip differential comes standard, though if it's active on the street, you're being a menace. The ride suffers quite a bit with those large wheels and stiff suspension, but it's compliant enough to keep passengers calm while you're snapping through the gears with the exhaust crackling.

Buy a standard X3, rather than an X3 M, and the closest you'll get to this level of performance will be the X3 M40i, which is not a true M but has enough of the real M's goodness and body kit to justify buying it over the four-cylinder 30i models. This single-turbo 3.0-liter inline-six engine has the same buttery feel to it—perfection in every way—tuned down to a still absurd 382 hp and 365 lb-ft.

The most normal X3 you'll encounter is the common xDrive30i, which features a 2.0-liter inline-four with 248 hp and 258 lb-ft of torque. It's entirely worthy of BMW and shares the smooth, satisfying quality of the six but with significantly better fuel economy at a much better price. If you're willing to forgo BMW's xDrive AWD system, a rear-wheel-drive (RWD) sDrive30i is also available. Lower trims like these don't have the same excellent steering feel and road behaviors as the M-badged models, but they're also infinitely more comfortable as daily drivers.

Finally, there's the new xDrive30e, which combines a downrated version of the four-cylinder with a 109-hp electric motor installed on the standard transmission. We've driven other BMW plug-in hybrids with this combo like the X5 xDrive40e and 330e, and can say their driving dynamics feel nearly as sporty as the standard gas-only trims. However, BMW's small battery means small electric range of about 18 miles, and after that, a measly 24 mpg combined rating. That's lower than the 26 mpg combined for the cheaper, lighter xDrive30i, which returns 24 city and 29 highway. The M40i returns 21/27/23, while our X3 M drank premium gas at an indicated 15 mpg, not far off from its 14/19/16 rating. 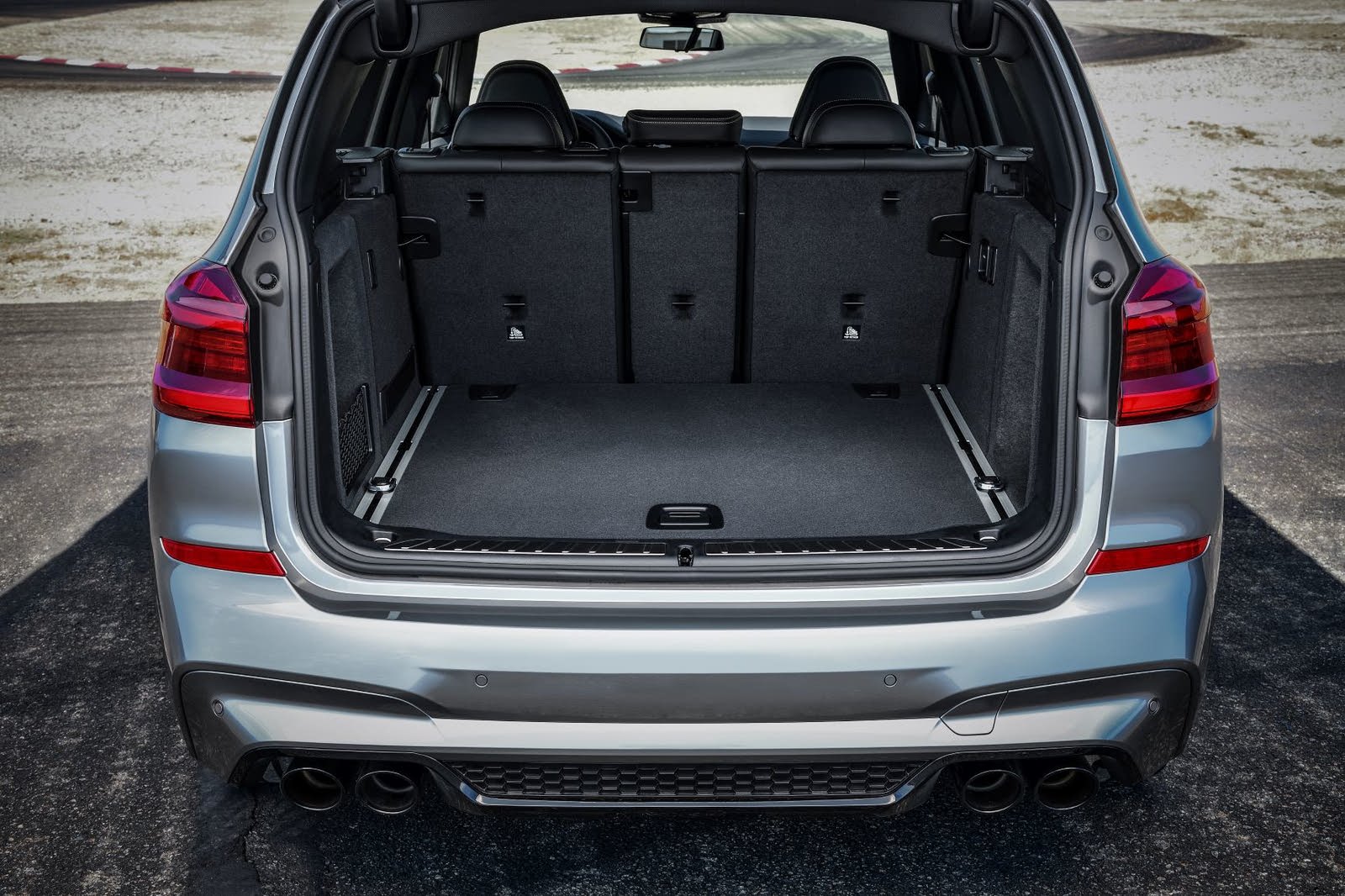 The X3 feels like a 3 Series with more headroom and slightly more rear legroom. It's right-sized for all but the tallest of people. The rear seats recline, and when folded, offer 63 cubic feet of storage (the Nissan Rogue does 70, so consider this average). When upright, the cargo area holds 29 cubic feet. Two cargo rails with four mounting points help secure loose items. Visibility is good in all directions. From a parking standpoint, an X3 is the ideal size, and its turning radius makes it easy to maneuver where a larger X5 would be stopped in its tracks.

The seating is firm and supportive. Models with sport seats have a manually-adjustable thigh extension, though all models have adjustable side bolsters. The rear seat, however, isn't as comfortable. This is the major difference between the X3 and larger models like the X5. It's flat and too hard for a long cruise. Another reason to buy the high-performance X3 M—any cruise won't take long.

If you've been driving BMWs for the past 25 years, you'll find the same basic layout inside the X3. The center stack is angled toward the driver with the usual climate control layout and stereo controls, there's an iDrive controller next to the shifter, and all the instrumentation glows amber. Driving the M version places more buttons on the console, including one for the sport exhaust, but everything is easy to find (especially the bright red start button). Additional M flourishes include blue and red stripes on the seat belts and matching stitching on the steering wheel rim.

A digital instrument panel comes standard, though in reality, it's styled and functions just as BMW's analog gauges did in older models. The standard touchscreen comes with iDrive 6.0 infotainment system, which works fast and is truly an intuitive system, whether swiping through the menus or using the shortcut buttons and a rotary controller on the console. 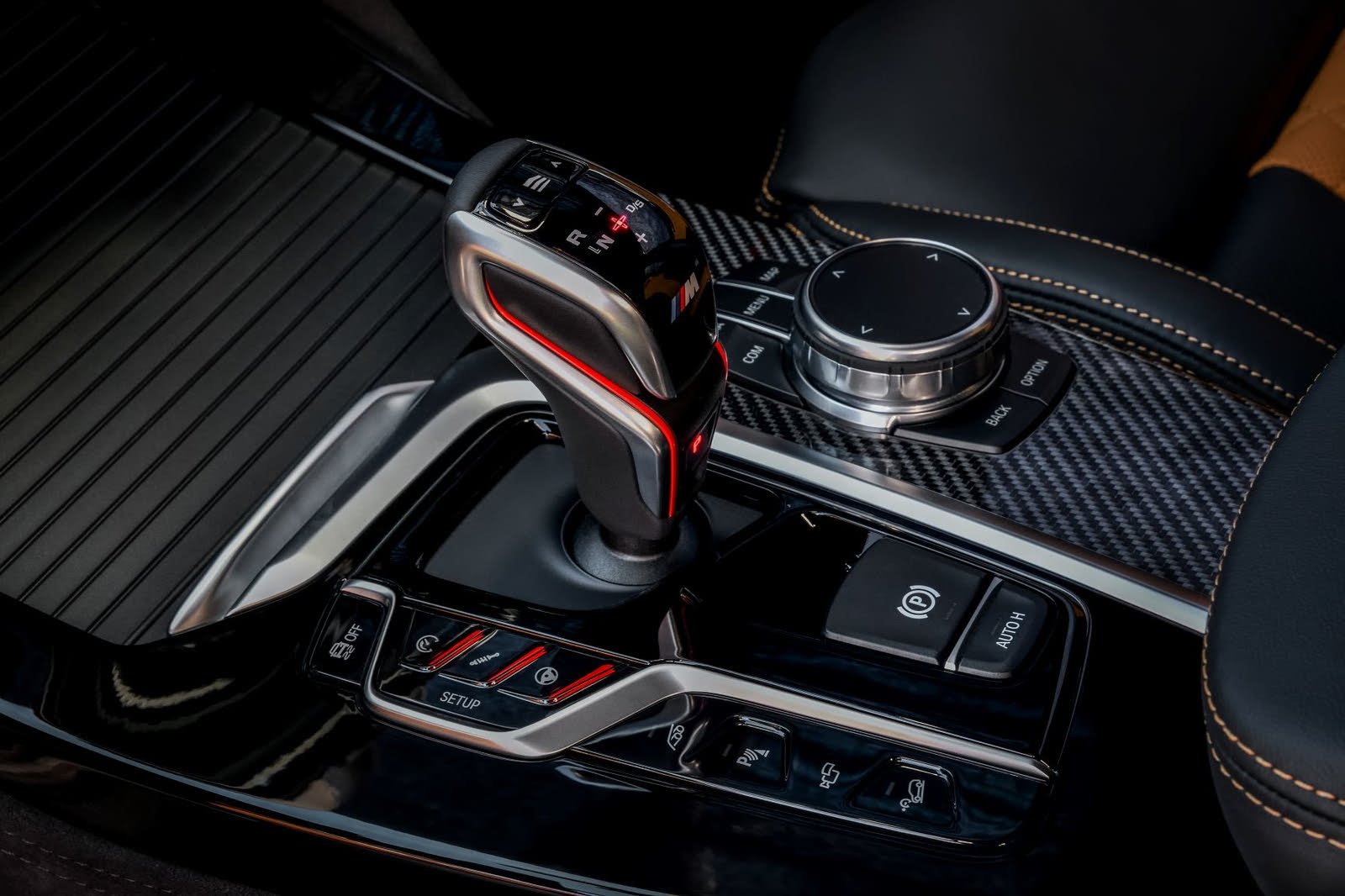 New for 2020 are standard navigation and LED low-beam headlights. Apple CarPlay connects wirelessly and no longer carries a yearly fee as in previous model years (sorry non-iPhone people, you can't participate; Android Auto isn't offered). The touchscreen is sharp, fast, and easy to browse through the many vehicle settings. For example, when looking at one list of items, the right pane will preview what you're about to click into, and then when you do, the right pane shows detailed renderings or animations of the specific action (like activating the three-blink turn signals). The owner's manual is stored onboard and accessible anytime you press and hold a finger anywhere on the screen. Swipe down for access to notifications and other frequently used features. (Check out our review of the 2019 3 Series for a deep run-down on this system.)

More awesome features abound, like 360-degree cameras you can control by touch or by waving your fingers in the air (using Gesture Control). The camera feeds blend into a seamless, video game-style experience, which sounds silly, but in reality, it shows everything around your X3—rendered as a model with moving wheels—in super detail. While sitting in a parking lot, you can have the cameras angled as if you're looking at yourself from the outside. The front camera will automatically activate when the parking sensors detect an obstacle at low closing speeds. Plus, these cameras can send a 360-degree image to your phone using the BMW Connected app. The standard telematics features, such as remote unlocking, are included with every X3. Wireless charging and a WiFi hotspot are optional. The basic stereo has HD radio and is only decent. SiriusXM is optional.

The optional Live Cockpit Pro revises the digital gauges on the instrument panel and adds more animations, though it's not the immersive, reconfigurable experience you'll find in an Audi or Mercedes. The head-up display is very detailed and can show scrolling lists of radio stations and exact renderings of intersections when the nav is running. Press the button between the central air vents to configure the driver assists, which include an accurate semi-automated function for driving through slow traffic on the Driving Assistance Plus Package. 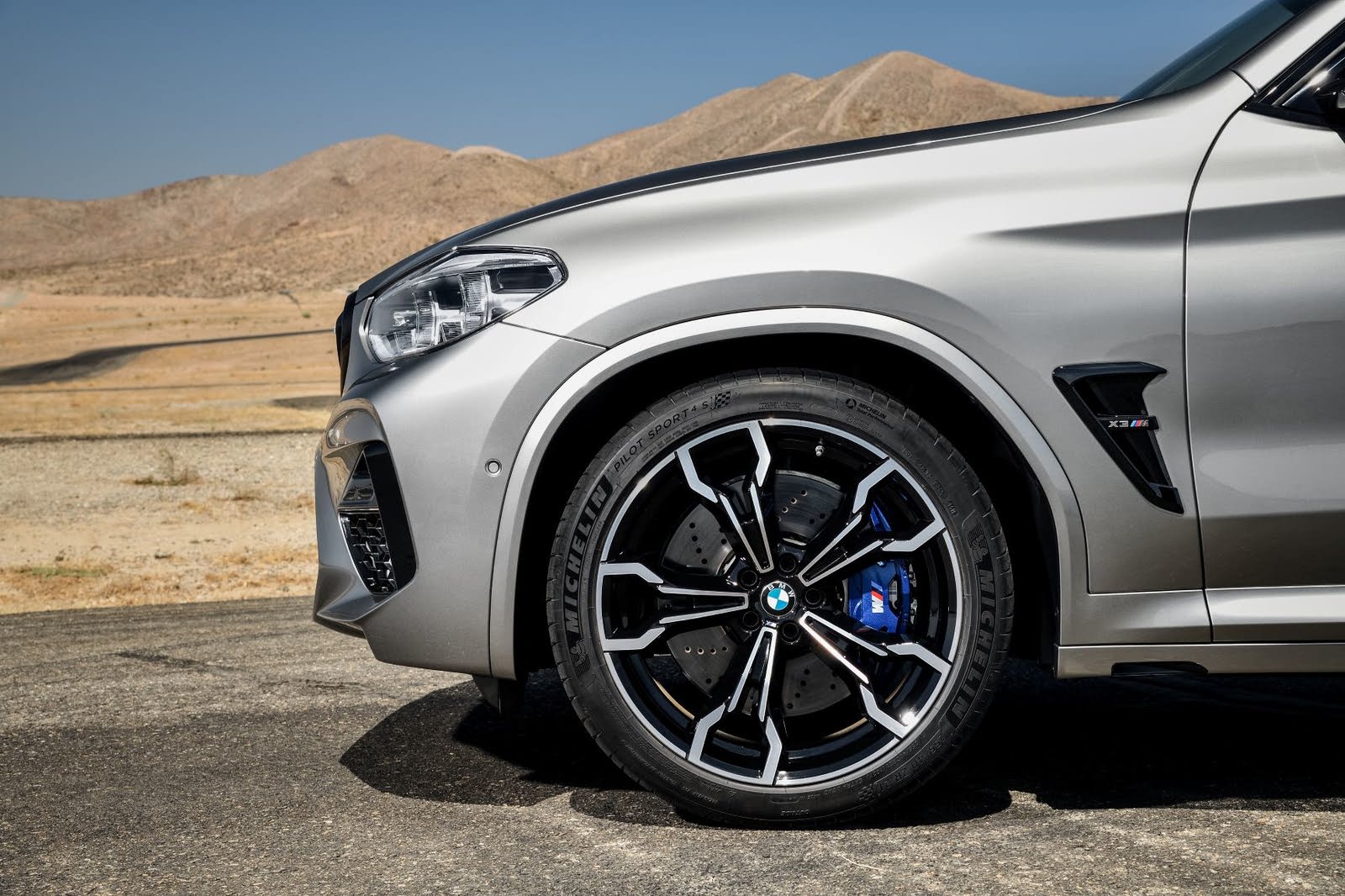 The 2020 X3 is rated a Top Safety Pick+ by the Insurance Institute for Highway Safety (IIHS) for the best scores in six crash tests, optional adaptive bi-LED headlights, and the standard forward emergency braking. The National Highway Traffic Safety Administration (NHTSA) rated the 2020 X3 five out of five stars overall and for all three crash tests in all tested passenger configurations. These tests weren't performed on X3 M or Competition models, but the safety rating still applies.

Pedestrian detection, adaptive cruise control, and parking sensors are standard. Blind-spot monitoring and lane-departure warning are optional on the Driving Assistance Package, while the Plus version includes lane keep assist, evasive steering assist, and Traffic Jam Assist for semi-automated control. Auto high beams are part of another package. Knee airbags are not available. 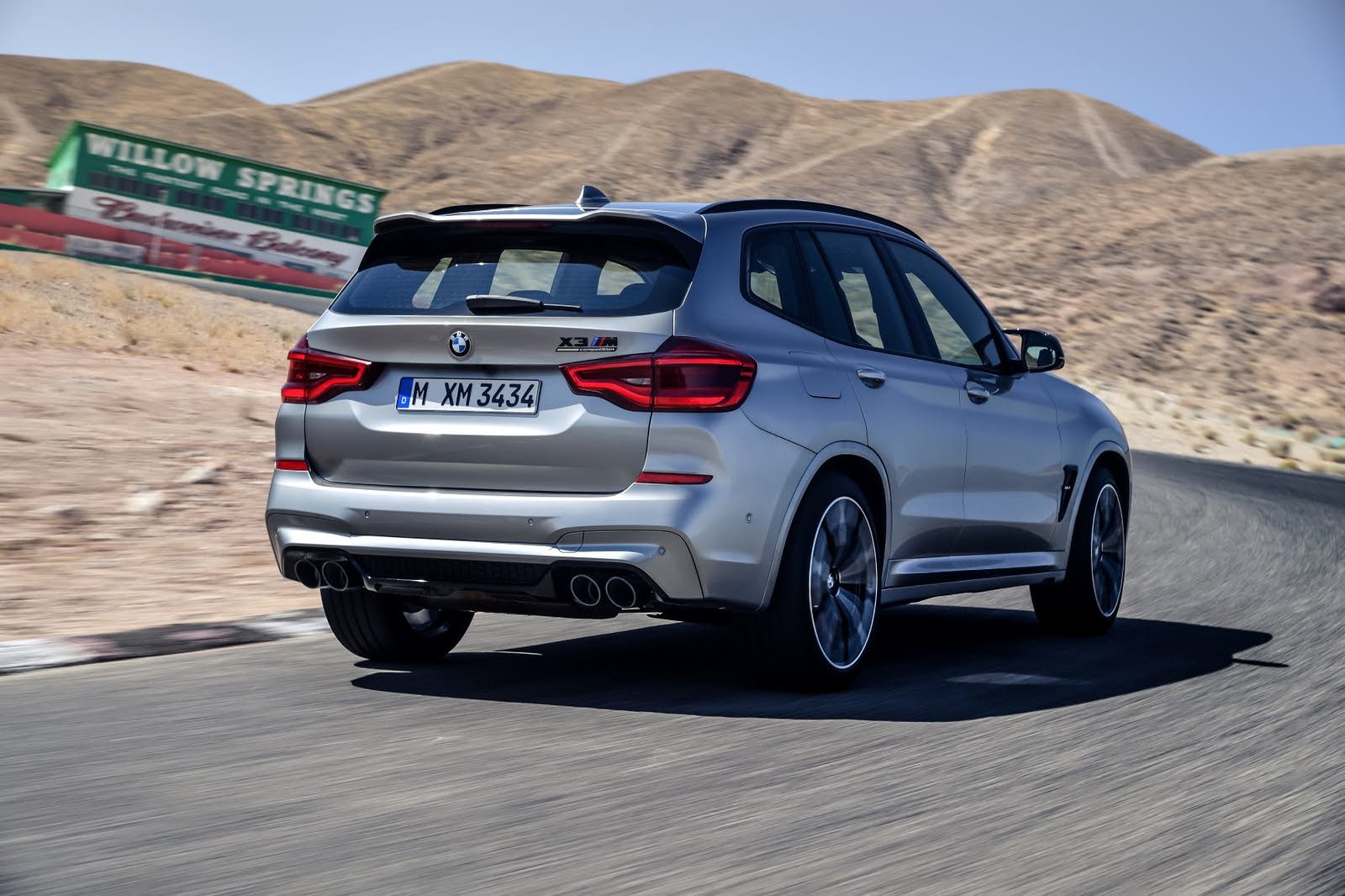 The 2020 X3 starts at $41,950 for the RWD sDrive30i, which includes navigation, rain-sensing wipers, 10-way power front seats with driver's memory, auto-dimming rearview mirror, power tailgate, garage door opener, and fog lights. We mention all these basics because just a few years ago, nearly every item was optional. There's more value in a new BMW these days. Factor the three-year/36,000-mile maintenance, which includes a brake flush and spark plugs, into the price. Most rivals offer this for thousands extra. But let's be honest: These cars depreciate like crazy and it's very easy to option them to $50,000 and higher. We think $82,695 for our X3 M is reasonable given it's like two cars in one—a hot rod plus an SUV—but most buyers will like the calmer performance and greater comfort of the 30i models. It's a good choice. Just don't overspend.

Looking for a Used X3 M in your area?