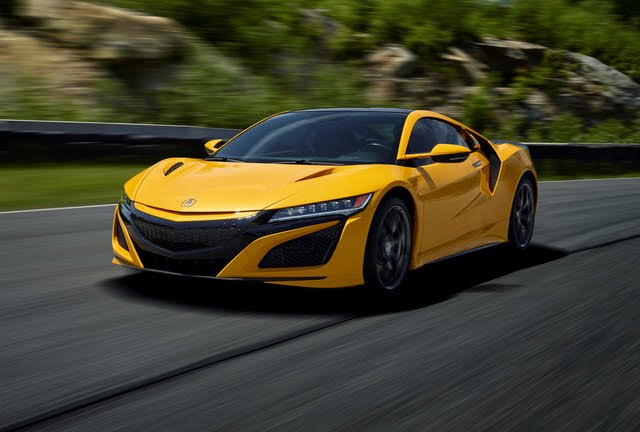 Acura resurrected the NSX name for 2016, but the new version is a far cry from the original. While the old NSX took the performance car world by storm in the early 1990s as a race-honed, driver-focused supercar, the new NSX is a showcase for cutting-edge hybrid technology. That said, it still delivers supercar performance and Honda-build quality. Acura refreshed the NSX for 2019 with minor upgrades to performance and handling plus a few new paint colors, so its changes are minimal for 2020.

Behind the driver is a 3.5-liter V6 boosted by two turbochargers. It is a potent thing on its own with a full 500 horsepower, but in front of the driver sits a lithium-ion battery pack, and an electric motor sits at each of the front wheels. Total system output is 573 hp and 476 pound-feet of torque. With that much grunt driving all four wheels, the sprint from 0-60 mph takes just 3 seconds, and the NSX will go on to a top speed of 191 mph.

The NSX weighs just over 3,800 pounds, which doesn’t sound like a lot among passenger cars but is actually quite hefty for a low-slung two-seater. The NSX also isn’t as frugal on fuel as one usually thinks when they hear “hybrid.” It returns just 21 mpg city, 22 highway, and 21 combined on premium fuel.

The NSX is still a serious performance car with aluminum wishbones front and back as well as magnetic ride control dampers. For 2019, Acura made some handling upgrades with stiffer stabilizer bars and stickier tires. Optional extras on the performance front include carbon-ceramic brakes. The driver can choose the NSX’s on-road manners by toggling between Quiet, Sport, Sport Plus, and Track driving modes.

On the inside, leather seats, a leather-trimmed instrument panel, dual-zone automatic climate control, keyless ignition, a 9-speaker stereo, two USB ports, and a 7.0-inch touchscreen are all standard. There is just one trim of the NSX, but an options package bundles together carbon fiber trim and an Alcantara headliner.

Bulky hybrid drivetrains tend to intrude on interior and storage space, and mid-engine performance cars don’t usually have much storage space to spare in the first place, so the NSX never stood a chance. The front trunk measures just 4.4 cubic feet.

The NSX is too expensive for the usual run of crash-testing, and Acura hasn’t added active safety features to its halo model. The NSX does get a multi-angle reversing camera and hill-start assist.

The NSX is still only a few years old, still exciting, and still a rare enough sight on the road that it’s an occasion whenever a new NSX makes an appearance.

Have you driven a 2020 Acura NSX?
Rank This Car