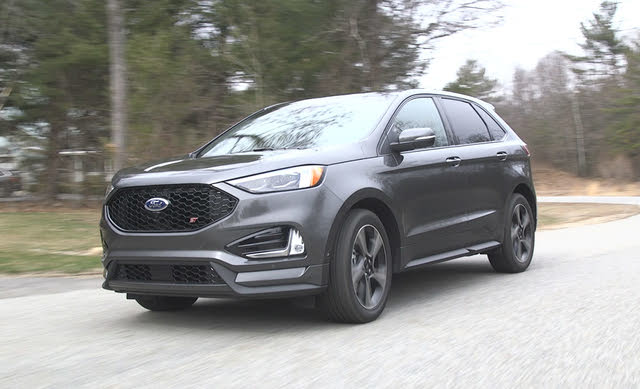 The Ford Edge feels dated in some respects, but it delivers the backseat legroom and cargo space that buyers need. 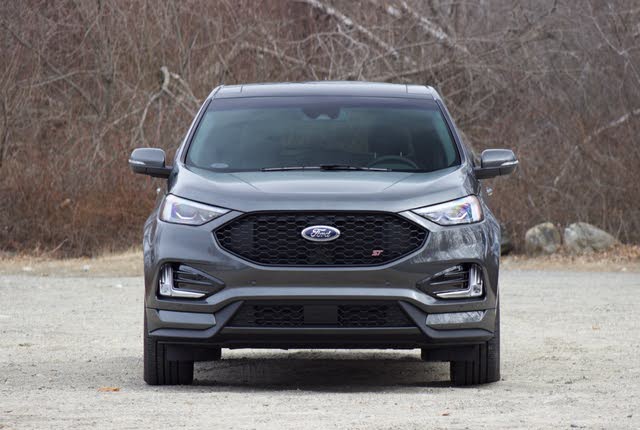 The Edge was a key vehicle in the evolution of the family SUV market when Ford first introduced it for the 2007 model year. Back then, automakers were experimenting with just what a “crossover” could constitute—look at the Pontiac Aztec and first-generation Chrysler Pacifica if you disagree. But with the Edge, the midsize, two-row SUV template started to take shape.

Ford offers the 2019 Edge with an ST trim, grafting performance onto the utilitarian Edge blueprint. But that begs a question—can a vehicle still be good at family hauling and commuting while also delivering speed and performance? 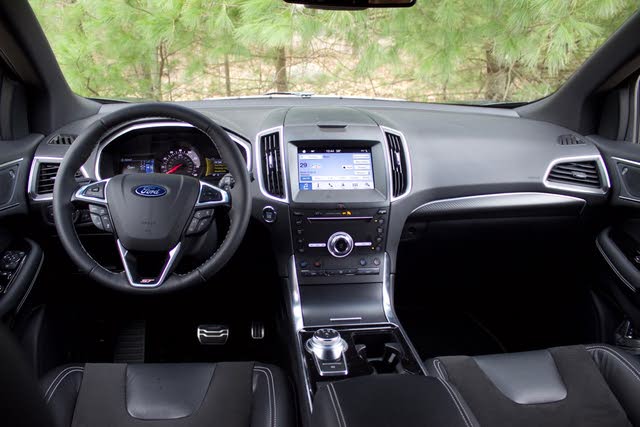 The Ford Edge received a facelift for 2019 that includes a new grille, headlights, and lower front fascia. Out back, the Edge has new taillights, and the red connector between the two taillights has been replaced with a larger black panel, giving every trim of the Edge a sportier appearance.

While Ford freshened up the exterior, things remain decidedly unchanged in the cabin. It feels pretty much the same as a 2014 Edge—and to be honest, even that interior felt dated. If you told me this was the 2010 interior with a new infotainment system, I’d believe you.

Sure, the Edge’s cabin is quite useful, and there’s a new rotary shifter that replaces the conventional shifter, but it can’t outrun Ford’s heavy reliance on plastics, especially in the empty spaces that frame the touchscreen. It tries to look modern, but down to the buttons used, it feels pretty dated. A decade ago, this may have been cutting edge, but today it looks like a plastic parts-bin special.

On the plus side, the Edge has plenty of standard and available features. It comes in SE, SEL, Titanium, and ST trims, like our test model. The base SE comes standard with 18-inch alloy wheels, keyless entry, push-button start, and rain-sensing wipers. Moving up to the SEL adds standard black roof rails, dual-zone climate control, power-adjustable front seats, rear parking sensors, and a leather-wrapped steering wheel.

The SEL trim offers a couple of available packages. The unimaginatively named 201A Package adds $2,882 to the price, buying the shopper leather upholstery, heated front seats, LED daytime running lights, and an upgraded 9-speaker sound system. The SEL can also be selected with the Convenience Package. For an additional $835, it adds remote start, a hands-free power liftgate, a wireless charging pad, and a 110-volt, wall-style power outlet.

Of course, the ST takes things a step further, employing some awesome touches from Ford Performance. These tweaks include a blacked-out grille, a new front lip and side skirts, 20-inch machined aluminum wheels, and an upgraded exhaust system. It’s just different enough to indicate the ST’s added performance without being gaudy. Our test vehicle came in a dark gray, but the Ford Performance Blue that you’ll find in much of the ST’s marketing material has more visual pop.

The ST also features leather seating and ambient lighting, and it can be fitted with a dual-panel moonroof, heated and cooled front seats, and heated rear seats. These creature comforts drove the as-tested price of our car to $49,430, which is pretty steep for a 2-row. The SEL trim’s $33,300 starting price is far more agreeable, even if it means sacrificing niceties like leather upholstery. And as we pointed out, you can tack on a lot of the niceties we enjoyed in the ST. The SEL won’t deliver the performance of the ST, but CarGurus recommends it as a well-rounded vehicle that will appeal to more buyers than the ST. 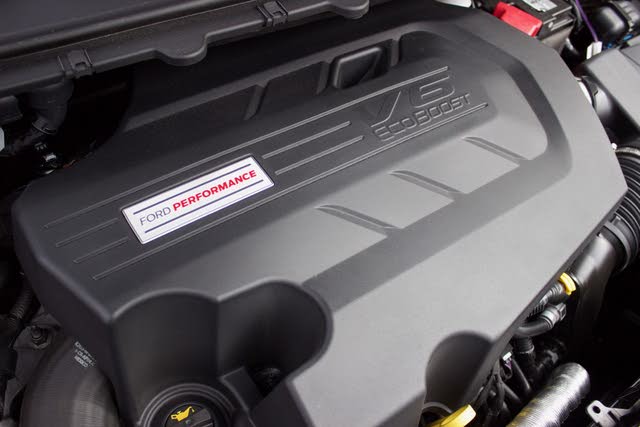 Every non-ST trim of the Edge receives the same engine: Ford’s EcoBoost 2-liter turbocharged 4-cylinder engine, making 250 horsepower and 280 pound-feet of torque. I’ve driven this engine in other applications, and it gets the job done and won’t let you down. In fact, it’s pretty darned good, and it sends power through an 8-speed automatic to the front wheels or available all-wheel drive (AWD). AWD adds $1,995 to the cost of each non-ST trim.

And then there’s the ST. It features Ford’s 2.7-liter EcoBoost V6 engine—the same one used in the Ford F-150. In the Edge, it’s tuned to put out 335 hp and 380 lb-ft of torque, sent through the same 8-speed automatic to AWD (there is no front-wheel-drive option for the ST). Keeping with the ST’s under-the-radar style, the exhaust is tuned only for healthy engine breathing—it has no throaty exhaust note to wake the neighbors. That’s good or bad, depending on how you look at it.

But the ST has a bite more fearsome than its bark, offering fantastic acceleration. Rotate the new shifter into D, and you’re off. By pressing the S in the middle of the rotary shifter, you activate Sport Mode, which provides an even swifter kick in the pants.

Of course, anyone can toss a monster engine into a car and ask the driver to hold on for dear life. Making a car that is balanced, precise, and can attack corners takes far more skill. And the Edge ST delivers in these respects.

In first driving the ST, I was a little skeptical, and I wasn’t feeling its cornering abilities. But then I started taking on some of New England’s curving back roads. By the end of my drive, I was amazed by how level the ST remained through those turns.

The downside of those same winding New England roads is their propensity for potholes. Over bumps in the road, the ST was smooth and compliant. Expect non-ST trims to be even smoother over those same roads, but the ST won’t force you to sacrifice comfort to have fun.

As for the tedious matter of fuel economy, the most efficient version of the Edge—the base 2-liter with front-wheel drive (FWD)—returns 22 mpg city, 29 highway, 25 combined. The Edge ST, on the other hand, returns 19/26/21. In a week of spirited driving, our Edge ST test car averaged 19.9 mpg. 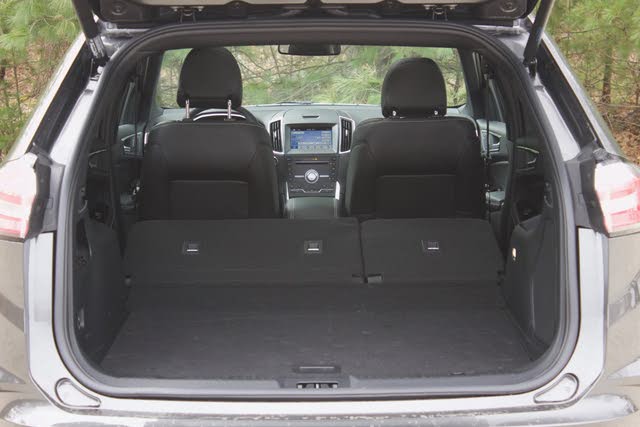 The Edge’s cabin might be dated, but it is still plenty useful. There’s a deep cargo bin in the center console and another one at the bottom of the center stack. The latter provides USB ports and the available wireless charger. Add the deep in-door pockets with large bottle holders, and you can find a place for all your daily gear.

The Edge has comfortable front seats, but for the ST, Ford replaces them with ST-branded bucket seats from Ford Performance. Like typical bucket seats, they feature pronounced side bolsters and are designed to keep your behind planted while enduring lateral G-forces. These are common in performance cars like a Corvette or Mustang GT, but rare in a midsize SUV.

But there’s a problem—the Edge ST’s bucket seats aren’t designed for tall people. You’d expect the driver’s seat to adjust much lower than it does, yet it stops at such a high setting that my head was literally touching the roof. I’m wondering if these seats came right out of the parts bin of another performance vehicle with a lower floor. Either way, I hope the non-ST trims of the Edge have more adjustable seats.

That said, if you’re fine being a passenger, the rear seats are incredibly spacious. They provide enough head- and legroom for my 6-foot-3-inch frame. There’s also plenty of cargo space, with 39 cubic feet behind the rear seats. If you need more than that, you can drop the rear seats with a nifty quick-release button, opening up 73.4 cubic feet of cargo space. That’s not stellar when compared with many 3-row SUVs, but the Edge competes more directly with crossovers like the Nissan Murano, all-new Chevy Blazer, and all-new Honda Passport. The Edge offers more space than the Murano and Blazer and falls just short of the Passport. 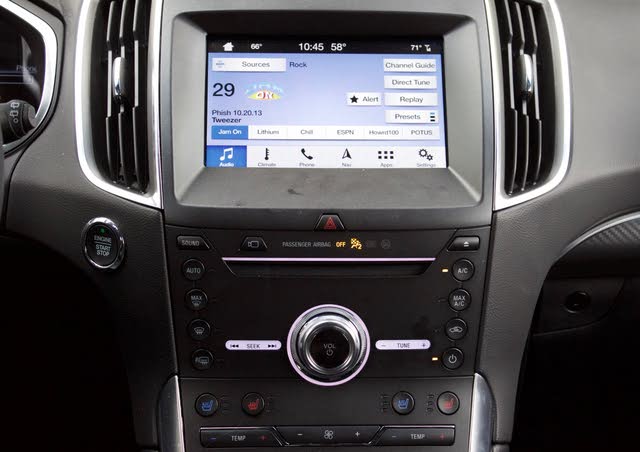 The base infotainment system uses a tiny little digital screen, operated by buttons that flank it. The functionality is there, including a USB port, a WiFi hotspot, streaming music, Bluetooth, and even voice recognition. But it’s all operated via a 4.2-inch non-touchscreen. At a time when you can get a base-trim Toyota Corolla with a full touchscreen and full app connections, this system feels cheap.

An 8-inch Sync 3 infotainment system is available on the SEL and standard on the Titanium and ST. It’s a great system despite middling graphics. Everything is easy to read, and the menu layouts are very intuitive. It also provides Apple CarPlay, Android Auto, and even Amazon Alexa integration. 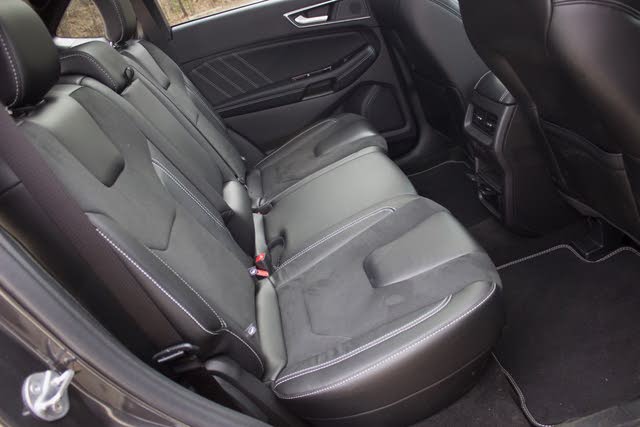 All trims of the Edge above the SE can be upgraded with the Co-Pilot360 Assist+ package, which adds features like adaptive cruise control that can stop and go with traffic, evasive steering assist, and a lane-centering system. As the name suggests, the latter feature senses the lane lines and keeps the Edge centered in its current lane of traffic. 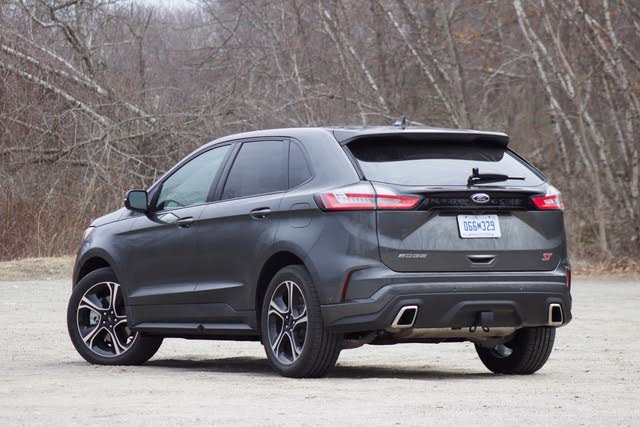 Base MSRP for the 2019 Ford Edge sits at $29,995 for an SE trim with FWD. Our ST test model anchored the opposite end of the lineup, starting at $42,355, but topped out at nearly $50,000 with options. The CarGurus Recommended Trim is the SEL, which starts at $33,300 and can be optioned with many of the features we enjoyed in the ST. The SE’s tech and connectivity features are pretty underwhelming, helping push our verdict toward the SEL.

But even with the incredibly fun ST trim, the Edge as a whole feels dated. The ST delivers performance, available Sync 3 delivers the tech, and Co-Pilot360 delivers the safety. Even more than that, the Edge delivers what people need, like cargo space, rear passenger space, and compartments all around. And yet, sitting behind the wheel every day, you’ll be staring at cheap, dated plastics—while the competition has far more compelling interiors.

Ford has a lot of cool initiatives in the works. We’ve heard rumblings about a new, off-road-ready Bronco, an electric Mustang-inspired performance crossover, and an ST version of the all-new Explorer. I hope the Edge ST is a stopgap as we wait for all of those interesting things that are on the way. In the meantime, the Edge ST remains a seriously fun but unassuming suburban speedster.

Daniel looks very promising - we are looking at BMW, AUDI, LEXUS, JAGUAR, RANGE ROVER, and the EDGE, so we'll see how the 2019's measure up!

BiggerBrat I wasn't impressed after looking at and test driving the Rogue SV with the premium package for considerably less money than the Ford Edge. We've actually done all the paperwork and will pick up the new Rogue tomorrow 3/9/19

GuruHNQBD There is so much to like about this vehicle, but the dash is so cheap looking and dated that I don't want to look at it. Ford really needs to update this.

Users ranked 2019 Ford Edge against other cars which they drove/owned. Each ranking was based on 9 categories. Here is the summary of top rankings.

Have you driven a 2019 Ford Edge?
Rank This Car

873 views with 9 answers (last answer about a month ago)

my dash screen freezes for no apparent reason on my 2019 Ford Edge. How do I get it fixed?

I want to flat tow a car less than 5000 lbs behind my class C RV (Sprinter chassis). My Ford Dealer says that that a Ford Escape fits my needs, but I can't find any documentation that it can.