With the right options checked, the Buick Envision can be a compelling luxury SUV. Unfortunately, the price to get there is too high to make sense. 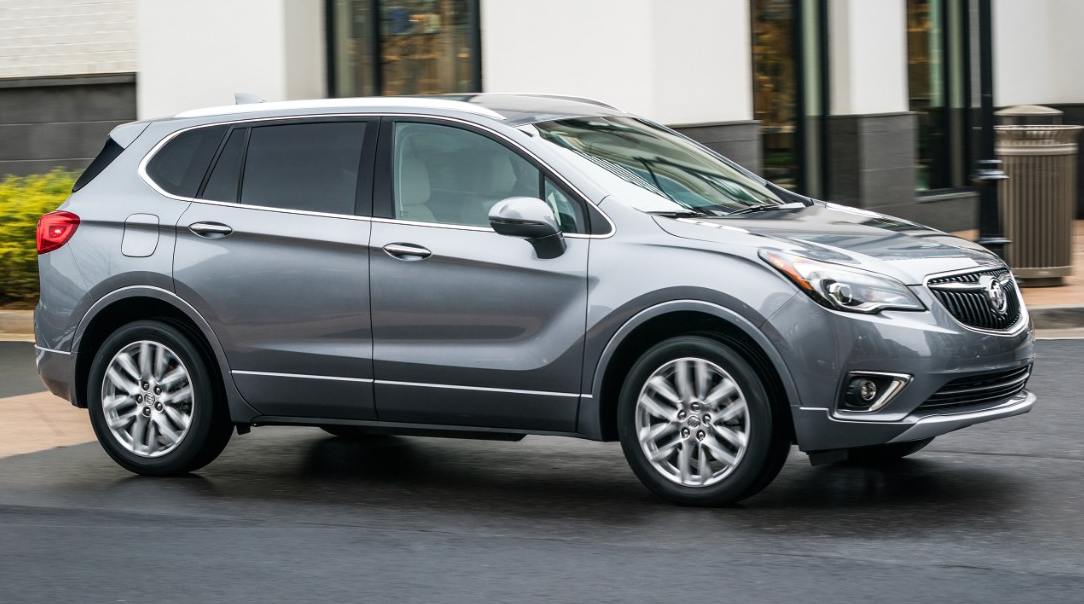 What defines a luxury car? In the past, it was pretty easy to quantify, and just as easy to differentiate one from the economy cars of the world. But now a traditionally inexpensive brand like Mazda can make cars as nice as Lexus does. Automakers can no longer rely on reputation.

So the 2019 Buick Envision faces a conundrum. Buick calls it a compact luxury SUV, positioning it as a viable option for younger luxury shoppers. That pits it against some of the most popular and best-selling upscale SUVs on the market, including the Acura RDX, Lexus NX, BMW X3, and Audi Q5. Yet the Envision’s true competition more likely comes from another GM vehicle, the GMC Acadia. Both are for aspirational shoppers looking to move up-market from a high-volume vehicle like the Chevy Equinox.

If you are in the market for a compact, upscale sport-utility vehicle, should you consider the Envision? Read on to find out and learn which trim CarGurus recommends. 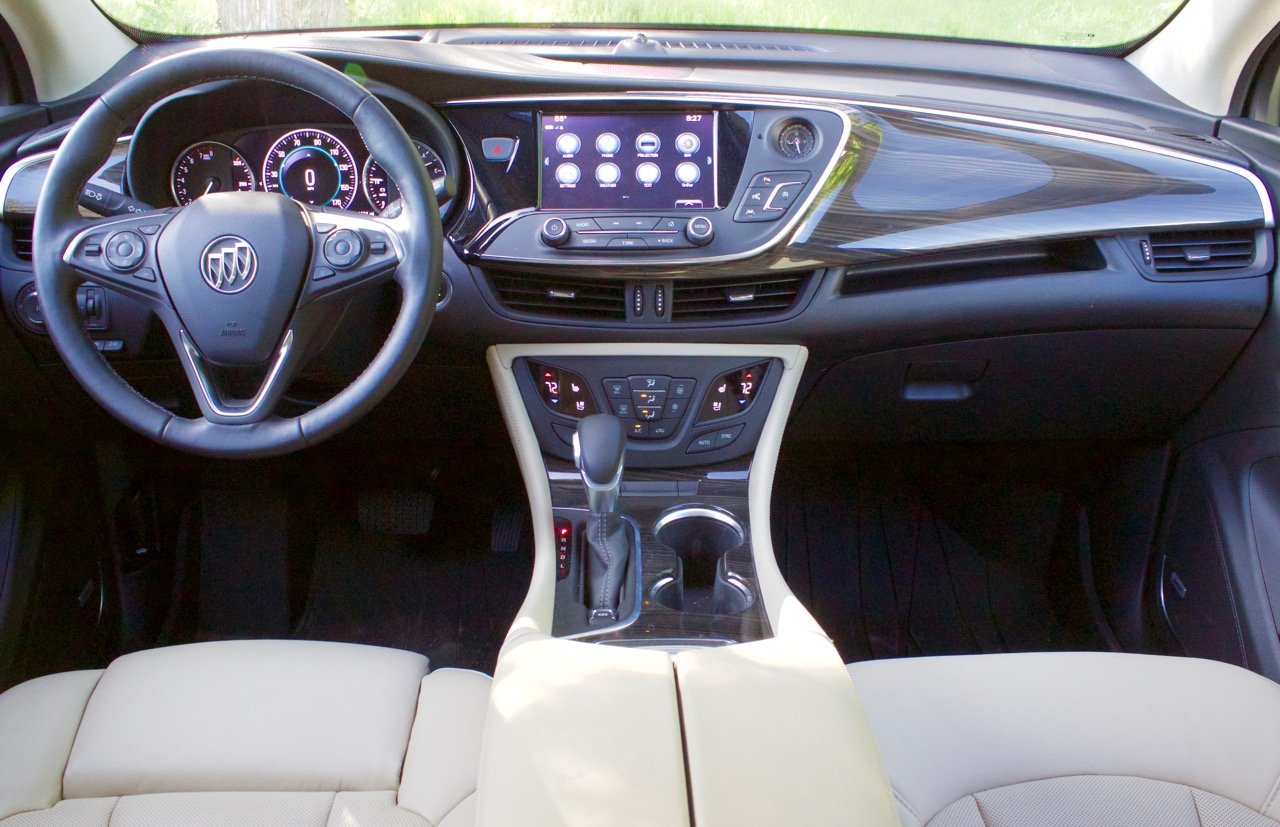 The Envision may be the most handsome vehicle in Buick's SUV lineup. It's less stubby than the subcompact Buick Encore, and while the full-size Buick Enclave is certainly attractive, the Envision has a more taut, athletic vibe. The strong body lines along the sides and upright rear section of the side windows give it a collection of proportions similar to that of a BMW X1.

Stepping into the Envision, the cabin looks rather attractive, and in a market full of overly busy dash layouts, we can appreciate this clean and straightforward setup. But closer examination reveals that this cabin isn’t up to the luxury billing Buick gives it.

The matte-finish material used for some of the climate controls and the bezel around the radio and navigation system may be Buick’s attempt to replicate the matte-finish interior controls used in the Lexus NX, but when combined with chrome and light-colored leather, it just looks cheap. A high-gloss black would have been far more attractive, given the other materials used in this vehicle. This matte finish is also used on the multifunction steering wheel, where it feels coarse to the touch.

Earlier this year, we drove the all-new 2019 Mazda3, and it put the rest of the industry on notice. Its cabin matches most luxury cars for thousands of dollars less than vehicles in the luxury segment. Its lines are attractive, the materials are top-notch, and the tech is integrated seamlessly and stylishly in a way that would make Frank Lloyd Wright blush. In a world where vehicles like the new Mazda3 exist, you have to look at the cabin of the Envision and ask, "Is this really enough?"

If you needed one small detail to explain this point, look to the power windows. The Mazda3 has convenient one-touch up/down power windows on all four doors. For the Envision, all four windows are one-touch down, but only the driver’s door window is one-touch power-up. Yes, it's a small detail. But it would also be easy for Buick to offer this convenience on all four windows, so it indicates that some corners may have been cut when designing the Envision.

The Envision has five trims: the base—or Front-Wheel-Drive (FWD)—Envision, followed by Preferred, Essence, Premium All-Wheel Drive (AWD), and Premium II AWD. Preferred and Essence are each available with FWD or AWD.

We tested the range-topping Premium II AWD, which comes with heated and cooled front seats, a head-up display, navigation, leather seating, and, as you may have guessed from the name, all-wheel drive. These features make the Envision a comfortable vehicle, but we've seen many of these creature comforts as standard equipment on vehicles that cost thousands less. 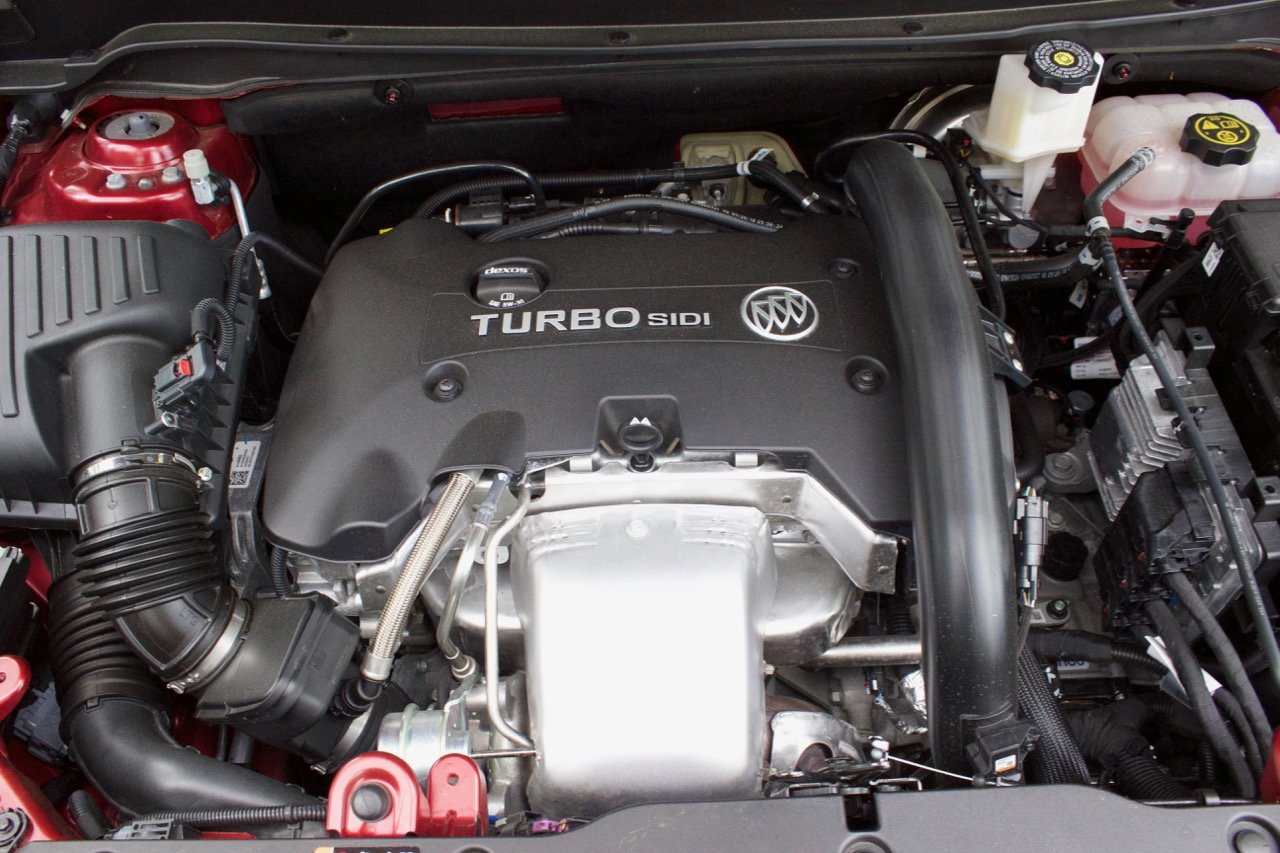 The FWD, Preferred, and Essence trims come with a 2.5-liter inline 4-cylinder engine that makes 197 horsepower. This engine connects to an outdated 6-speed automatic transmission and FWD or available AWD for the Preferred and Essence trims. The base comes only with FWD. This setup feels underpowered and sluggish in many driving situations.

The Premium and Premium II trims come with a 2.0-liter turbocharged 4-cylinder engine, making 252 horsepower and 295 pound-feet of torque. Thanks in part to a new 9-speed automatic, this engine delivers power well and provides solid acceleration. It comes standard with AWD, and that's one of the key reasons CarGurus recommends the Premium trim.

The Envision's steering feels responsive and pretty tight, though the vehicle can be a little top-heavy in corners. You really feel this only when taking an off-ramp with too much speed, so as long as you’re not pushing it, the Envision stays very composed. This vehicle is suited best to driving around town, where its ride is at its smoothest. And when cruising along or on the highway, take a moment to appreciate just how quiet the Envision is. Buick used plenty of sound-deadening materials to make a supremely quiet cabin.

Fuel economy with the 2.5-liter and FWD is 22 mpg city, 29 highway, 25 combined. The EPA rates fuel economy for our turbo AWD test model at 20/25/22, and in a week of both city and highway driving, we managed 21.3 mpg. When you compare the two engines, the fuel-economy gains offered by the 2.5-liter aren’t enough to make up for its lack of power. 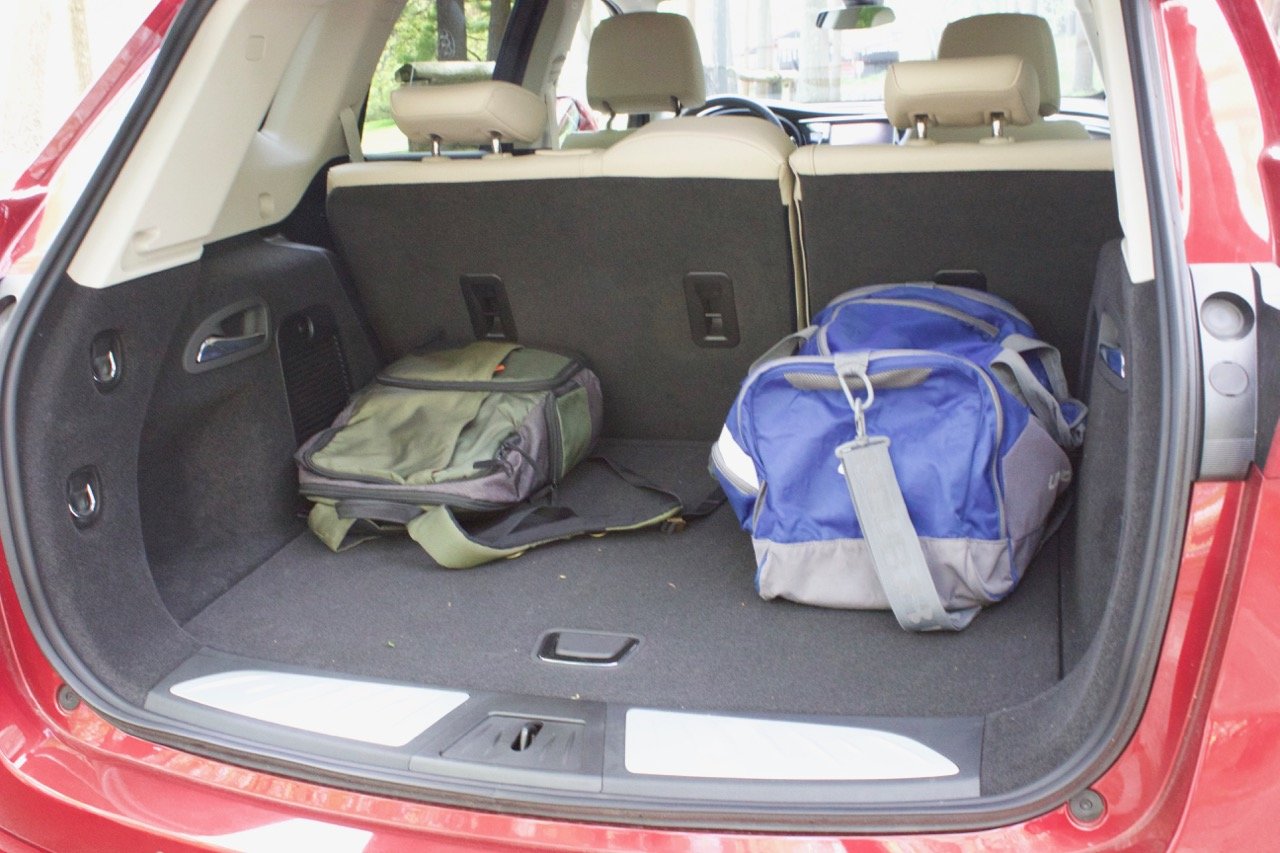 The driver's seat offers plenty of room. You sit up high, giving you a commanding position and providing plenty of visibility. The second row also has plenty of head- and legroom, though more of the latter than the former. The second-row seats can recline to a couple of seat-back positions.

With the rear seats up, the Envision provides 27 cubic feet of cargo space. That number jumps to 57 cubic feet when you fold the rear seats, which puts it on par with the Acura RDX—one of the leaders in this class. Buick also gives you helpful cargo tie-downs; there are deep pockets in all four doors and a cargo tray above the glove box. Buick certainly makes good use of the Envision's space, and you can load it up with plenty of gear. 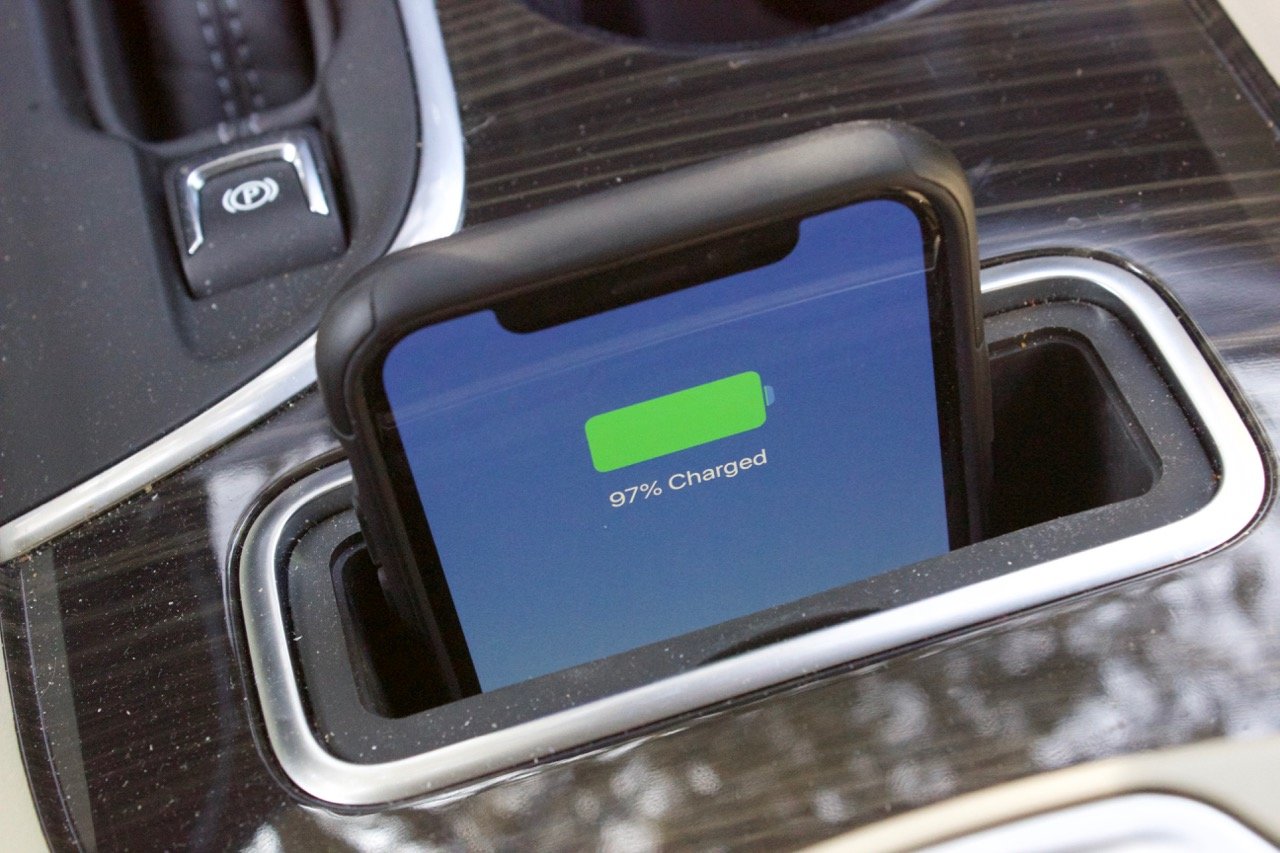 The Envision comes standard with GM's Intellilink infotainment system. This is similar to the Chevy MyLink system and consists of an 8-inch touchscreen featuring a pretty straightforward layout. There are hard buttons and dials below the screen, and the screen itself has a dock of icons for music, connectivity, and navigation. Pressing the home button below the screen will bring you to a home screen with customizable drag-and-drop icons.

This system also comes standard with Apple CarPlay and Android Auto and is quite seamless going from the connectivity screen to Intellilink and back. Our test vehicle also came with wireless charging for compatible smartphones. But unlike other vehicles, which have a flat charging pad, the Envision has a weird little “pocket” where you insert your phone.

Below the touchscreen, you'll find touch-capacitive controls for the climate and heated/cooled front seats. These are similar to the flat buttons on a microwave, but less useful. They aren’t very sensitive and seem to respond only half the time. This seems like Buick added tech for tech’s sake, which is never a good thing. 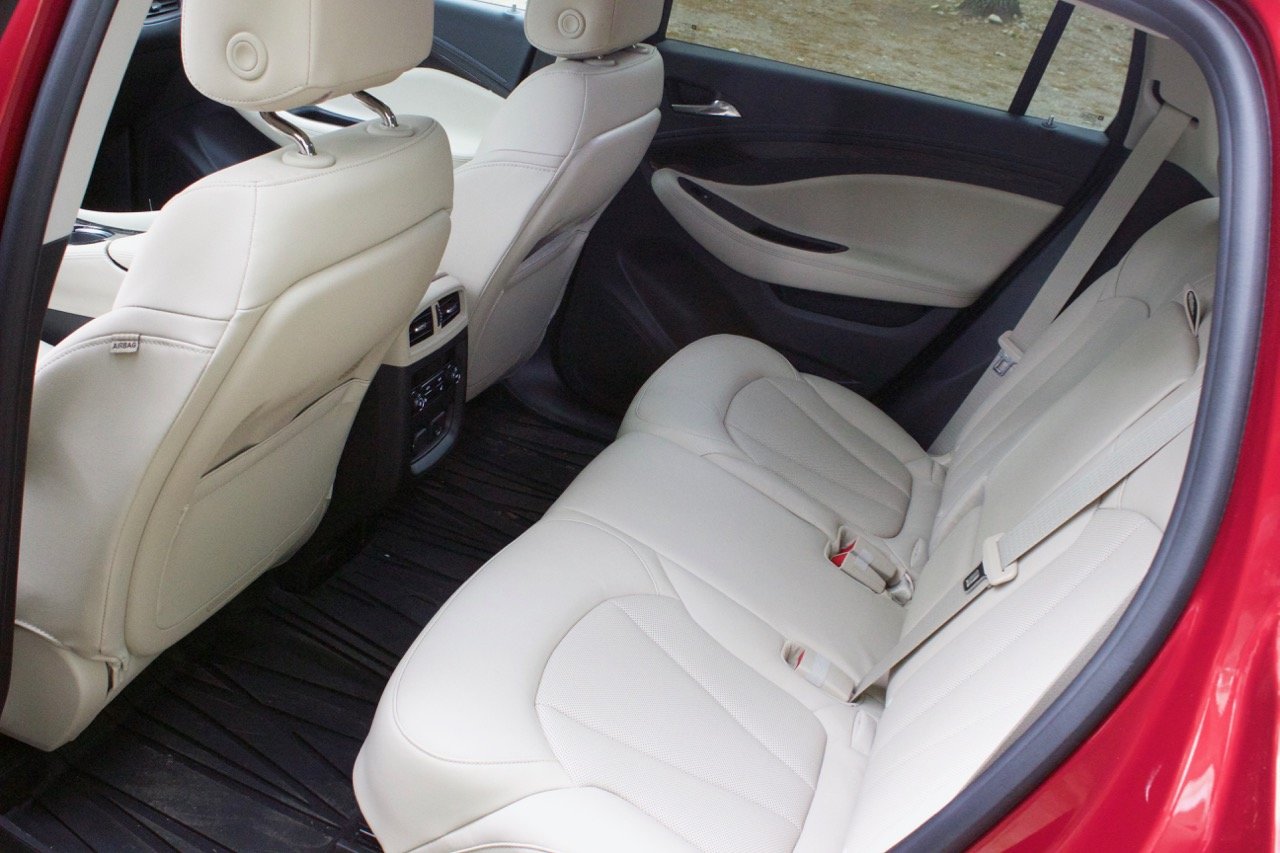 The Envision comes standard with ten airbags—including side-curtain and knee airbags—and a reversing camera with Rear Park Assist. The Premium and Premium II trims come standard with GM’s Safety Alert Seat, which vibrates the seat cushion to alert the driver to potential hazards. It also works with the front and rear parking sensors.

Essence and Premium trims come standard with blind-spot monitoring and rear cross-traffic alert. The Premium trim comes standard with lane-keep assist, lane-departure warning, and forward-collision alert. Our test vehicle came with the Driver Confidence Package, which is available only on the Premium II trim and includes adaptive cruise control, automatic front braking, and a 360-degree camera.

The Envision also includes a maddening feature found on nearly every General Motors vehicle. When a driver puts the car in Park, steps out, and locks it up to walk away, the white reversing lights come on and stay on for about a minute. GM says this is to illuminate the area around the car, but it gives the impression the car is in reverse. It’s an answer to a question no one ever asked and a solution that can make things confusing for everyone else. 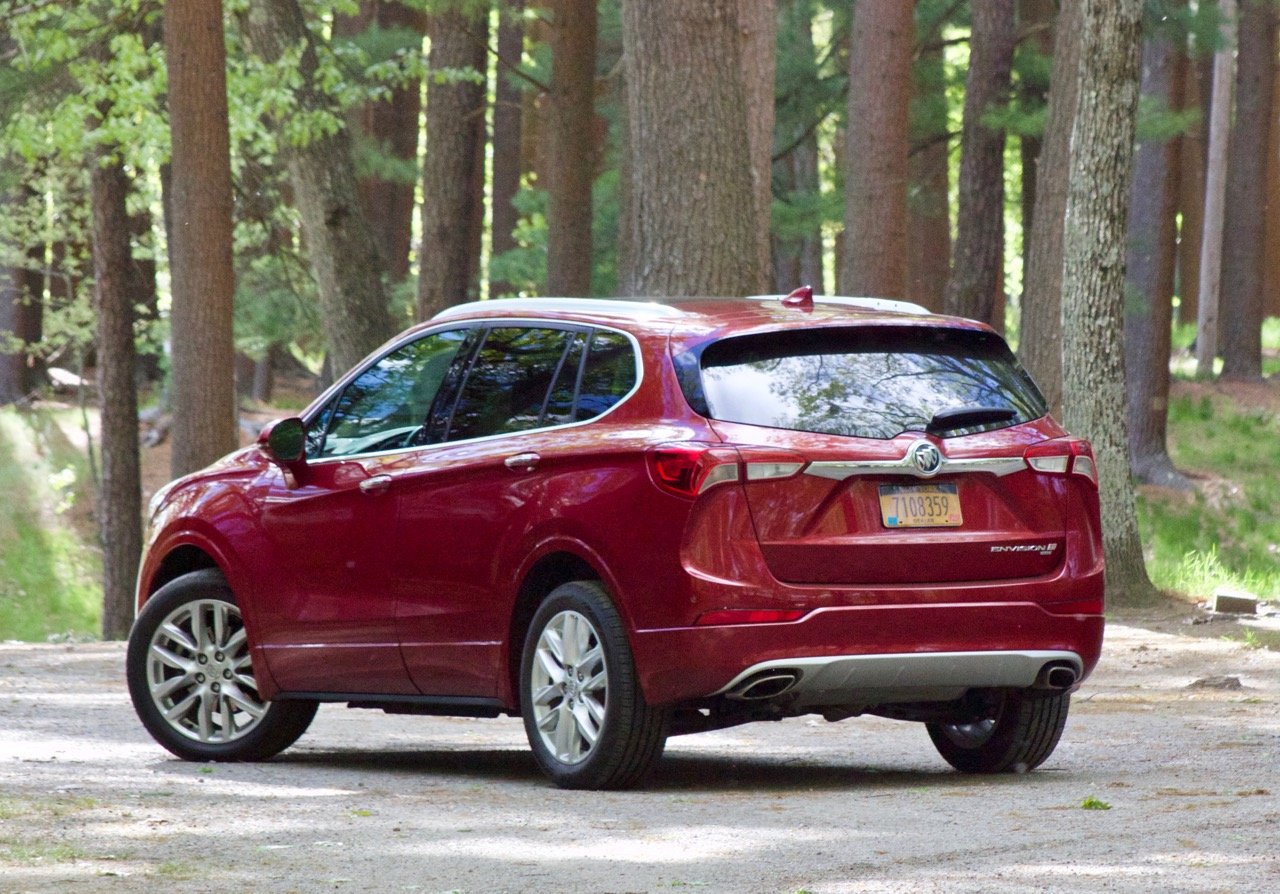 Before we get into pricing, a little context is required. It should be noted that the Buick Envision is built in China, and Buick sells more of them in China than in the United States. How many, you ask? Back in 2016, Buick sold more than a quarter-million Envisions in China. In 2017—the first full year of Envision sales in the United States—Buick sold just over 40,000 here. That should reveal the true nature of Buick’s priorities. There’s no shame in saying that any US sales are just an added bonus. That said, it’ll be fun when someone shops a Buick Envision over an Acura RDX because they want to “Buy American.” Don’t tell them the RDX has been built in Ohio since it was introduced.

With all this in mind, the 2019 Buick Envision starts at $31,995, plus a $1,195 destination fee. The CarGurus Recommended Premium AWD trim starts at $40,700, and our Premium II AWD test model clocked in at more than $48,000. That test price included options like the available panoramic moonroof, which adds nearly $1,500. Meanwhile, the 2019 Acura RDX starts at $37,400. Sure, that’s more than the base Envision, but the RDX comes standard with a more powerful engine and a panoramic moonroof. Once you add enough options to make the Envision a compelling rival to the RDX, it starts becoming too expensive to make financial sense.

In the eyes of GM, Buick makes luxury vehicles. But how do Buicks stack up against GM's range-topping Cadillacs? Well, if Cadillac is GM’s first class and Chevy is flying coach, then a Buick has to be business class. This really is an SUV for someone most interested in a comfortable ride. The only problem is that both Lexus and Acura do a better job at providing exactly that. And maybe there’s a place for this SUV in the market, but certainly not at this price point. GM needs a reality check when it comes to the Buick Envision.

What's your take on the 2019 Buick Envision?

johnsonsh I sincerely hope that the 0-60 time doesn’t INCREASE with increased torque. But I am sure that it has DECREASED! Sorry guys but someone had to do a better job with your proofreading!!

Have you driven a 2019 Buick Envision?
Rank This Car

What Is The Difference Between A Good Deal And A Fair Deal?

Is there anything with the engine or any part of the drive train?