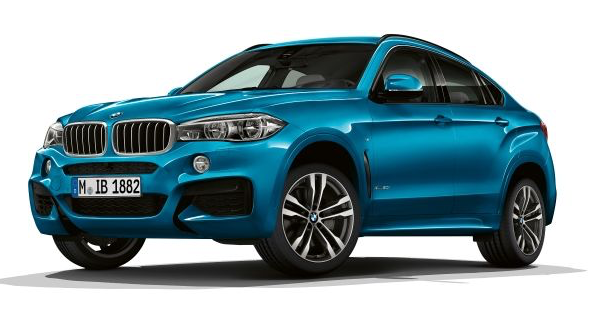 Average user score
5 ⁄ 5 stars
Based on 4 reviews
Review by GuruVHFSG — Lols of features, great ride, horsepower, and nice on the eyes!!! I love my new car. Read more

Few automakers can claim to have started a whole new vehicle segment. The BMW X6 was the world’s first “Sport Utility Coupe,” and while it feature more than the typical two doors associated with a coupe, its fastback profile was unmistakable. BMW also infused the X6 with so much performance, it defied the laws of driving physics. So much so, that BMW dubbed it a “Sport Activity Vehicle” when it arrived in 2009. The second generation of the X6 hit the scene in 2015, and it has been carried over to 2019, with minimal changes.

The 2019 BMW X6 embraces the coupe and SUV fusion with a raised ride height, large fenders, and a sleek fastback profile. The vent immediately behind the front fenders is a BMW design cue shared with other coupes, like the 4 Series.

Buyers can choose between the xLine and M Sport exterior styles. The xLine features 19-inch Y-spoke wheels, bumper add-ons, and rocker panels for a more rugged look. The M Sport is all about the street, and features “Shadowline” exterior trim, an aerodynamic body kit, and the option of 19-, 20-, or 21-inch wheels. It makes for a sharp, performance-oriented look, inspired by the BMW X6 M.

The X6 has an attractive and functional cabin, with a mechanical aesthetic shared with other BMW models. The dash features ambient track lighting and a woodgrain dash strip that breaks up the lower climate and radio controls from the upper digital display screen. That screen runs the latest form of iDrive, BMW’s infotainment system. The controller in the center console, used to operate the screen, is not only a rotary dial and a directional joystick, but also a touch-sensitive pad. The top of the dial has a space that allows the operator to “draw” letters and numbers. iDrive also has powerful voice recognition, which can understand complex commands.

The X6 is available in tiers including Simplicity, Convenience, Premium, and Executive. The Simplicity tier comes with heated front seats, a moonroof, Xenon headlights, and driver-assistance features such as lane-departure warning, blind-spot warning, and park distance control.

The Convenience tier comes with 4-zone climate control, satellite radio, and the Comfort Access Key, which allows the driver to open the X6 with the touch of one’s finger. The Premium tier adds wireless device charging, an in-cabin WiFi hotspot, a 3D-surround view camera, and the helpful Parking Assistant.

The base engine powers the sDrive35i and xDrive35i. It’s a twin-power turbo 3.0-liter inline-6, making 300 horsepower and 300 pound-feet of torque. Power is sent through an 8-speed automatic transmission to the rear wheels (sDrive) or available all-wheel-drive (xDrive).

For those looking for more power, look at the xDrive50i and its 4.4-liter TwinPower turbo V8. It puts out 455 horsepower and 480 pound-feet of torque. Power is also routed through an 8-speed automatic to standard all-wheel drive. This setup is good for a 0-60 mph time of 4.6 seconds; it has an electronically limited top speed of 130 mph. The top speed can be raised to 155 mph.

The X6 is available with Dynamic Damper Control to minimize body roll, and Dynamic Performance Control which can adjust power to the wheels. This allows the X6 to handle more like a large performance sedan than an SUV that weighs more than 4500 pounds.

For years, the BMW X6 was unlike any other car on the road, and only recently has it started to face some rivals, like the Mercedes-Benz GLE Coupe. But its head-turning looks and impressive performance ensure the X6 will continue to come to mind in response to any utterance of the phrase “sport utility coupe.”

GuruXP694 Should have massaging front seats like the Mercedes GLE counterpart

Dexter Too much side window greenhouse glass. Roof line slopes too extreme for a short wb platform.

Users ranked 2019 BMW X6 against other cars which they drove/owned. Each ranking was based on 9 categories. Here is the summary of top rankings.