A more-powerful base engine and a new GT trim add some much-needed sportiness to Volkswagen’s stalwart sedan. 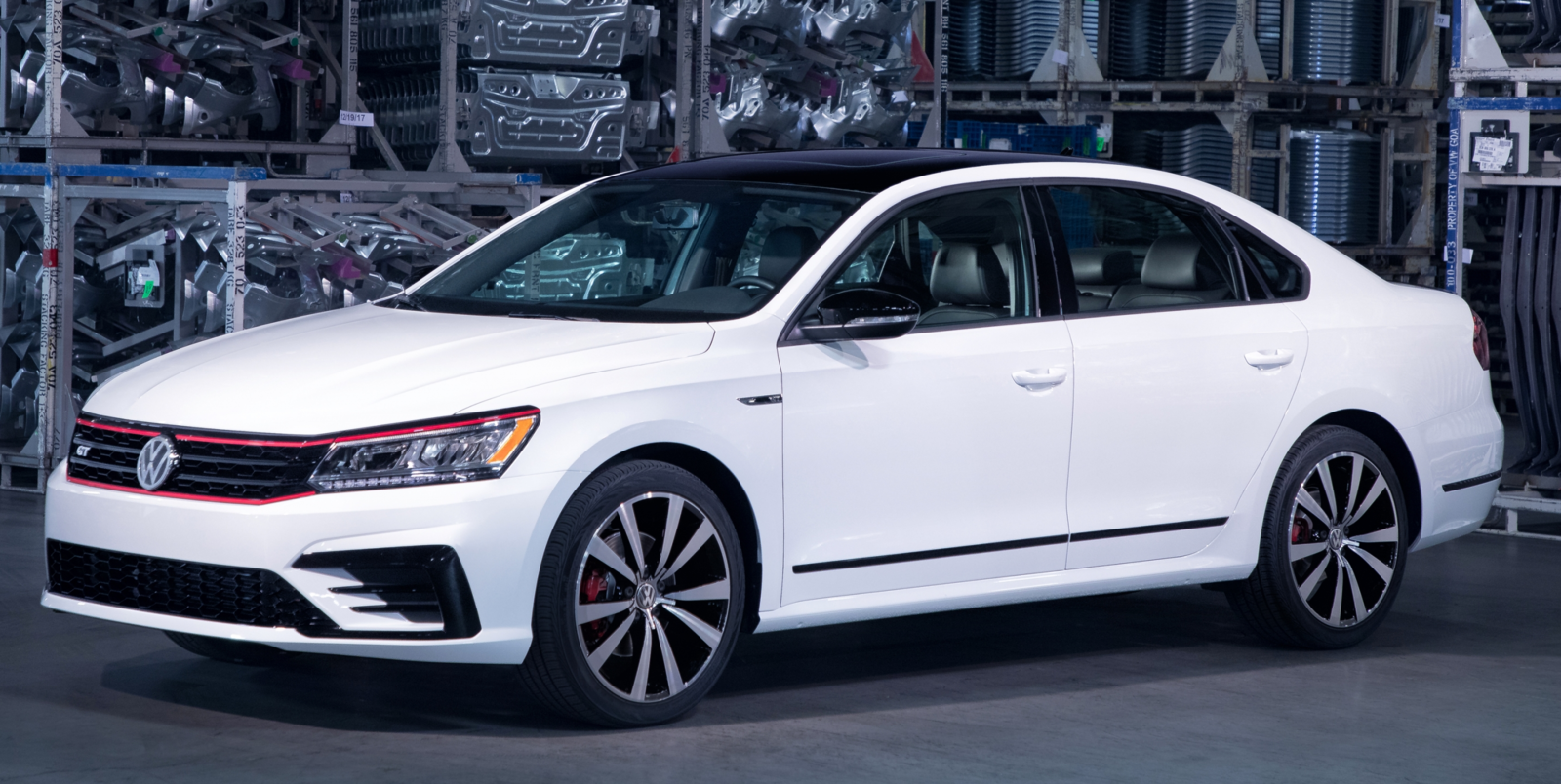 The Passat is getting a little long in the tooth, but it’s still a competitive option in the midsize segment. Still, there’s always been a distinct lack of sportiness in the lineup. In preparation for the next generation—slated to debut in 2020—Volkswagen fitted the 2018 Passat with an upgraded 4-cylinder engine and added a new GT trim offering a V6 and a sport suspension. Additionally, advanced safety systems such as blind-spot monitoring with rear cross-traffic alert and a forward-collision warning system with automatic emergency braking can now be added to the base S trim. 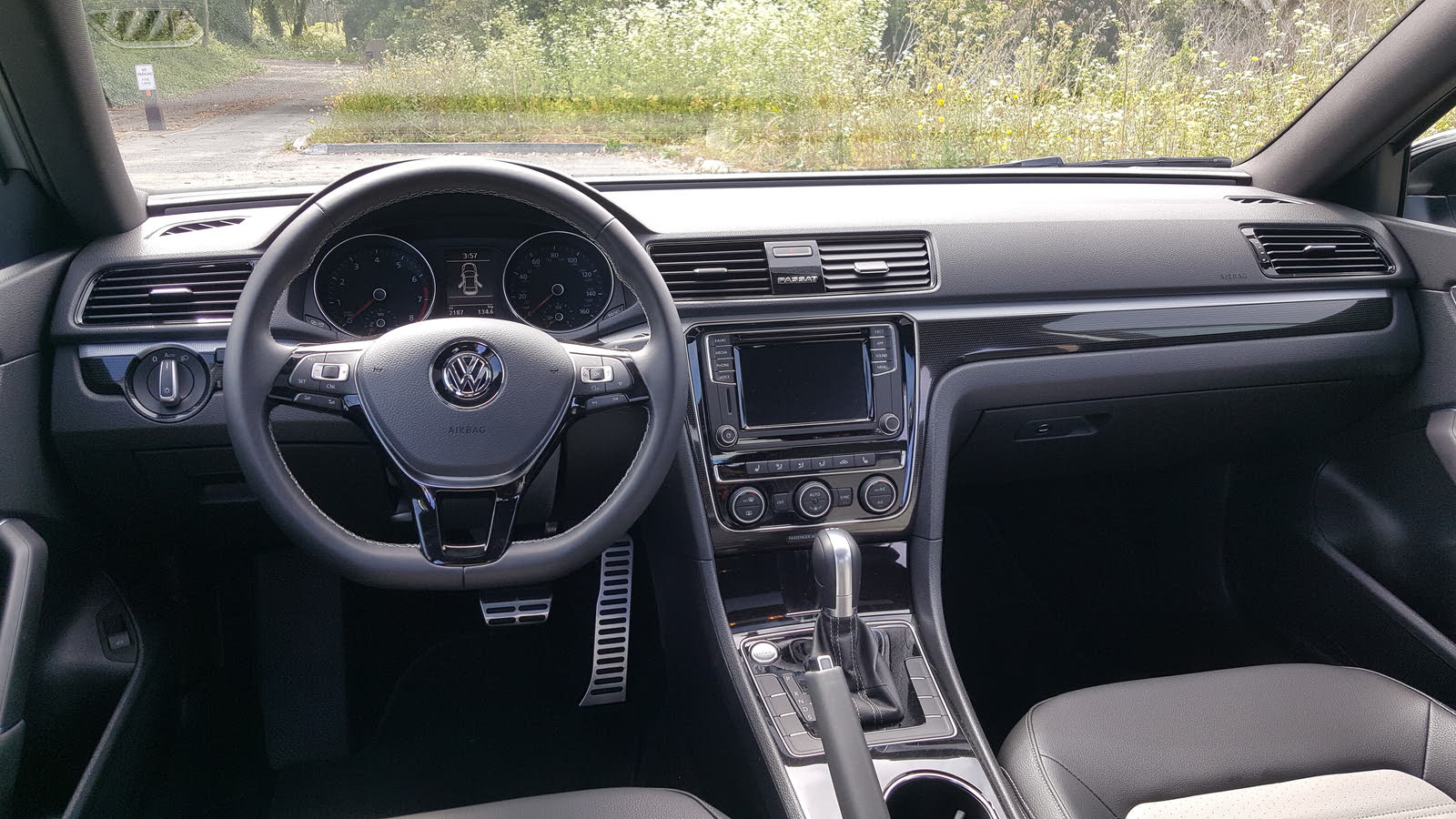 We’ve been living with the current Passat design for 6 years. But that's not a mistake, as Volkswagen has always held to the principle “refine rather than redesign.” Still, when the current-generation Passat debuted for the American market, critics panned it for losing VW's European feel. To be honest, those critics weren’t entirely wrong. There wasn’t a lot of sportiness to be had with the Passat, and that’s enough to deter some buyers completely. Even if they don’t end up buying the Sport trim, a lot of shoppers feel better knowing it’s there—for the same reason people walk into a Chevy dealership to look at the Corvette and Camaro but end up driving away in a Cruze.

With that in mind, VW created the new GT trim by adding a sport suspension, better-sounding exhaust, 19-inch wheels, and some unique trim and aesthetic touches like the more aggressive R-Line bumpers, a honeycomb grille with red accent lines, and black trim everywhere, including the mirror caps and roof. In true VW fashion, these changes are informative rather than transformative. The GT doesn’t immediately stand out from the rest of the Passat lineup, even with its suspension dropped more than half an inch.

The other Passat trims also get some upgrades this year, with VW hoping those will keep the sedan relevant until the new generation is ready in 2020.

But there’s one drawback with the base S trim: the lack of VW’s Car-Net App-Connect, which offers access to Android Auto and Apple CarPlay. Thankfully, every other Passat trim comes standard with this feature. Next up, at $24,995, the R-Line trim boasts heated side mirrors and seats, V-Tex leatherette upholstery, an upgraded 6.3-inch touchscreen with satellite and HD Radio, and trim-specific styling, like 19-inch alloys and more-aggressive front and rear bumpers. You can even upgrade to LED head-, tail-, and running lights with the $1,195 Lighting package.

The top-tier trim is the $31,650 SEL Premium, which adds power-folding mirrors, a power passenger's seat, real leather, auto wipers, an automatic parallel parking system, and a lane-departure warning system. The stereo is upgraded to a Fender unit, and the driver gets a memory system for their seat. The SEL Premium rolls on 18-inch wheels and can be fitted with the V6 engine for an extra $3,000.

I spent my week with the Passat GT, a $29,145 package that essentially adds all the features from the SE and R-Line trims plus a sport suspension, better-sounding exhaust, 19-inch wheels, and the 3.6-liter V6. With an $850 delivery charge, the GT sneaks just under 30 grand at $29,995. 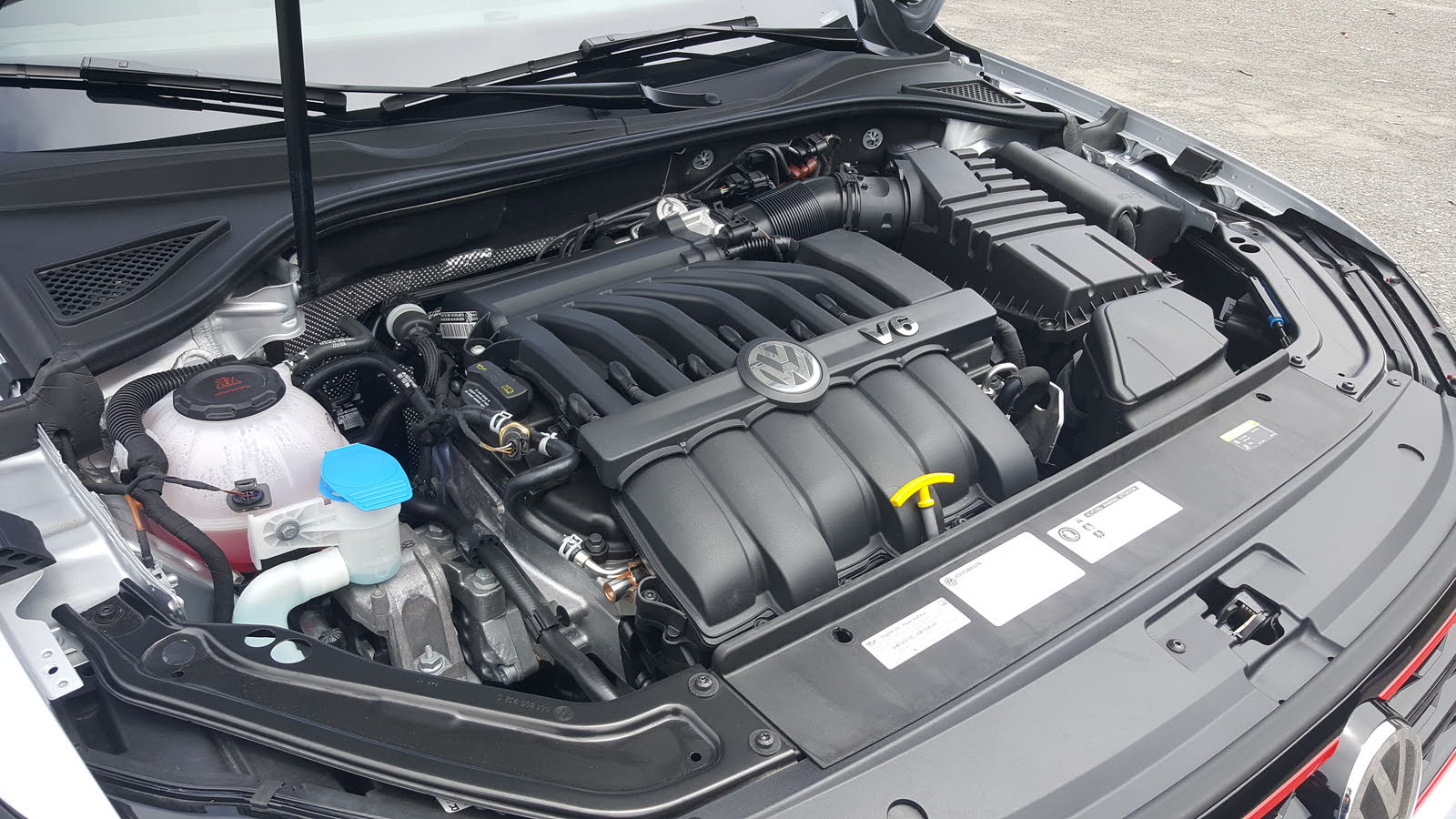 There’s nothing but good news on the performance front for the Passat in 2018. The old 1.8-liter engine is out, and the new base engine is a 2.0-liter turbocharged 4-cylinder sporting a new combustion cycle and an 8% efficiency improvement. EPA estimates put the new engine at 25 mpg city, 36 highway, and 29 combined. A meager increase of 4 horsepower slots the new engine at 174 hp and 184 lb-ft of torque, which gives the car a 7.7-second 0-60 time. This engine is more eager to rev than the outgoing one and presents a wider power band and a smoother ride through the range, with a 6-speed automatic that handles its duties with no drama.

But a bit of excess never hurt anyone, right? The 3.6-liter V6 engine delivers 280 hp and 258 lb-ft of torque, managed by a 6-speed DSG with a Sport mode that loves to be pushed. In fact, if you drive too timidly, the DSG can exhibit a bit of hunt-and-stab lurchiness in Normal mode. Many dual-clutch transmissions suffer from this behavior; this setup requires assertive, confident application of the throttle, but it’s a quick learning curve. The torque can overpower the tires, but it’s nowhere near as bad as the segment’s torque king—the Mazda6. Take a look at my review of that car to see exactly what I mean.

The upside to that quick shifting is that the V6 returns fuel economy of 19/28/22. That won’t put it at the top of the class, but the Passat's real-world mileage easily matches EPA estimates, and this is a much more enjoyable car than its primary V6 competitor—the Toyota Camry.

The GT’s suspension is the other big performance upgrade this year. Very often a “sport” suspension is great as long as the roads are perfect, but as soon as you get it on the highway or any rough surface, it’s a terrible experience. Not so here. This is the perfect blend: much-needed performance without sacrificing comfort. If it were up to me, it’d be the standard suspension across the Passat lineup. 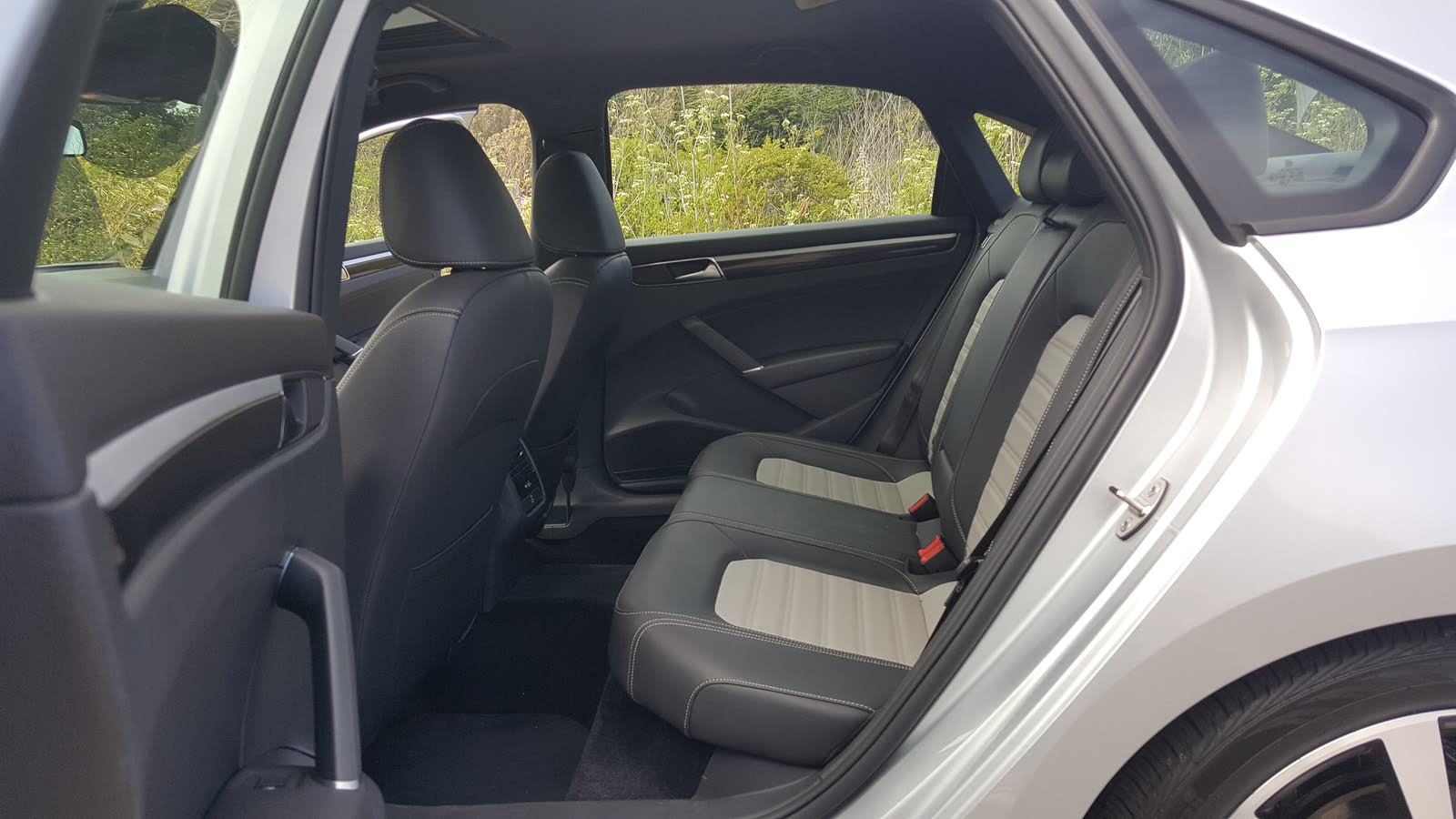 Beyond performance, the Passat has another distinct advantage over its competitors: size. With a spacious front seat and 39.1 inches of legroom in the rear, my 6-foot, 4-inch frame can sit comfortably up front without having to put the seat all the way back, leaving plenty of room for rear-seat passengers. Only the Accord offers more room in the rear. The trunk is similarly competitive, with 15.9 cubic feet of space and impressive accessibility thanks to a low load height and wide opening, although the hinges do intrude.

People have criticized VW’s interiors for their lack of flash and style, but I think there's value in classic styling. Ostentatious design goes out of fashion quickly, and the interiors that are getting all the attention today aren’t likely to show up on “Best of All Time” lists 20 years from now. I’m not saying the Passat’s will either, but you also aren’t likely to be embarrassed by it in 5 years’ time.

That said, I’m not crazy about the fake carbon-fiber trim, although the rest of the materials are high quality with soft padding in all the right places. And in the GT rear passengers will have to fight over a single USB charging port. 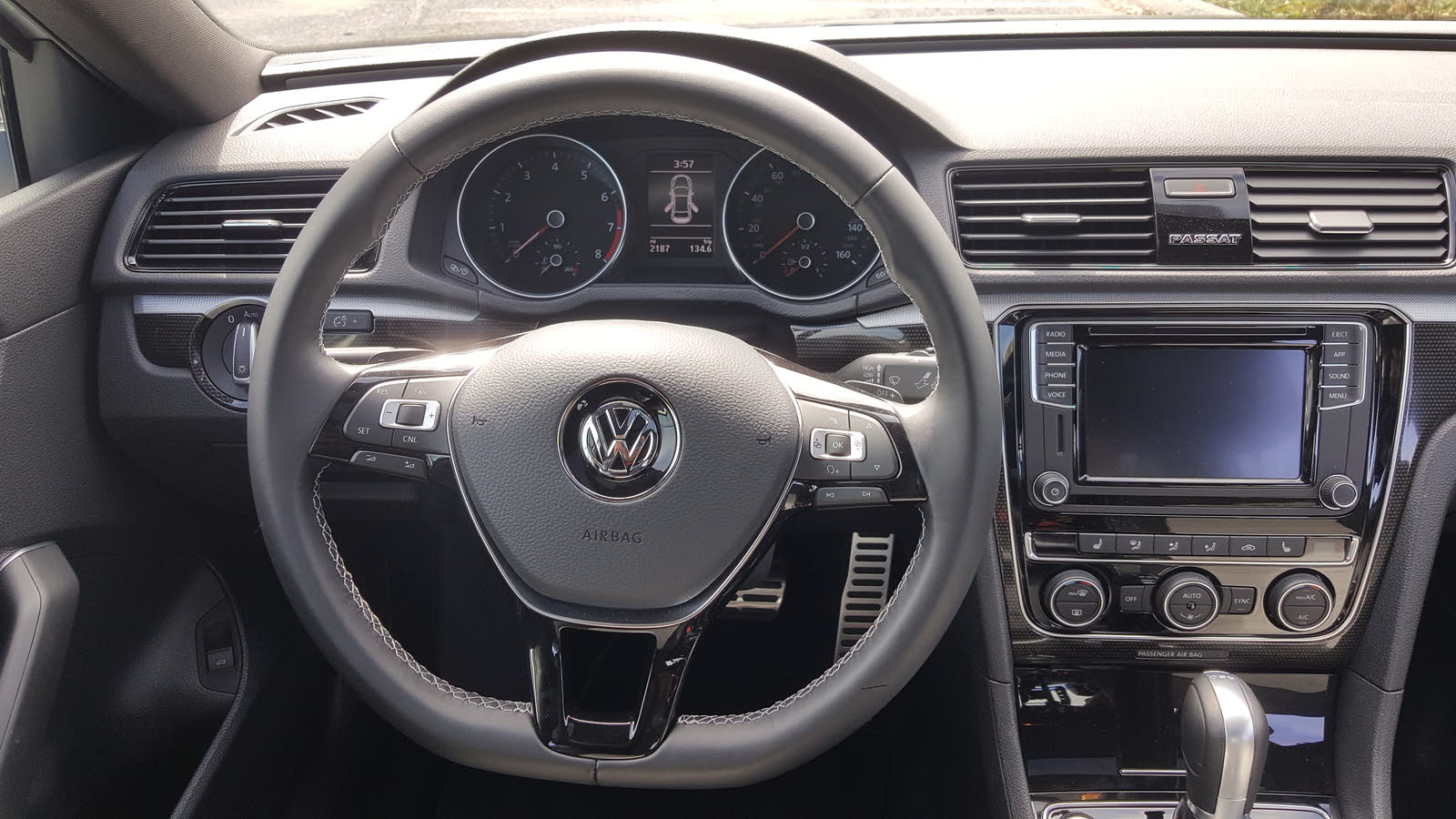 Volkswagen’s infotainment system is one of my favorites on the market, but it’s a bit dated at this point. With the next generation, we should see the fresh infotainment system currently in the Tiguan and Atlas, as well as the VW Digital Cockpit currently available in the 2019 Jetta. But in the 2018 Passat, we still get an LCD display that sits between the classic gauges. However, with Android Auto and Apple CarPlay in nearly all trims, the Passat holds an advantage over competitors that are very late to the game and would require you to spend extra on an embedded (and less functional) navigation system.

Still, the current system is simple, functional, and offers several nice touches that other systems omit. Sensors notice when your hand gets close to the screen, prompting the system to reveal additional touchscreen icons. And the stereo lets you see what’s on other channels before you actually pick one, allowing you to indulge your indecisiveness to the extreme. 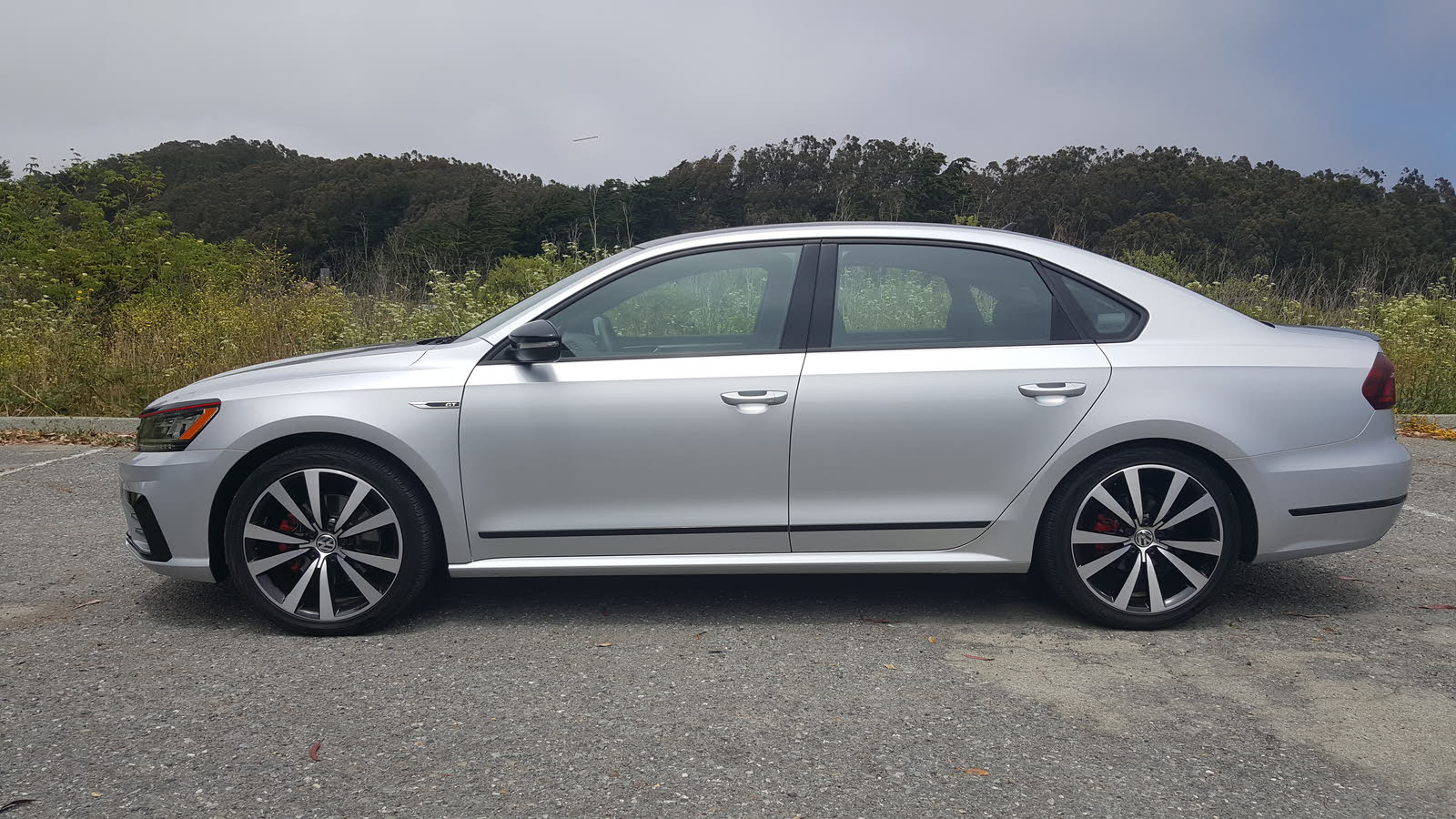 The Passat has plenty of airbags, including side curtains for front and rear passengers. It enjoys a 5-star overall crash rating from NHTSA, but Marginal ratings on the passenger side in the small-overlap front crash test and headlight tests prevent it from earning a Top Safety Pick title from the IIHS. Personally, I’d like to see braking distance improve, too. With 120 feet for the 4-cylinder engine and 130 for the heavier V6, it’s barely average. That said, the sport suspension and bigger wheels on the GT should improve that number.

The GT comes standard with blind-spot monitoring and forward-collision warning with automatic emergency braking. But if you want adaptive cruise control, you'll have to look somewhere else, and the lane-departure warning system is available on only the SEL Premium. However, the fact that you can outfit the base S trim with the Driver Assistance package—adding blind-spot monitoring with rear cross-traffic alert and forward-collision warning with auto emergency braking for just $495—wins big points in my book. 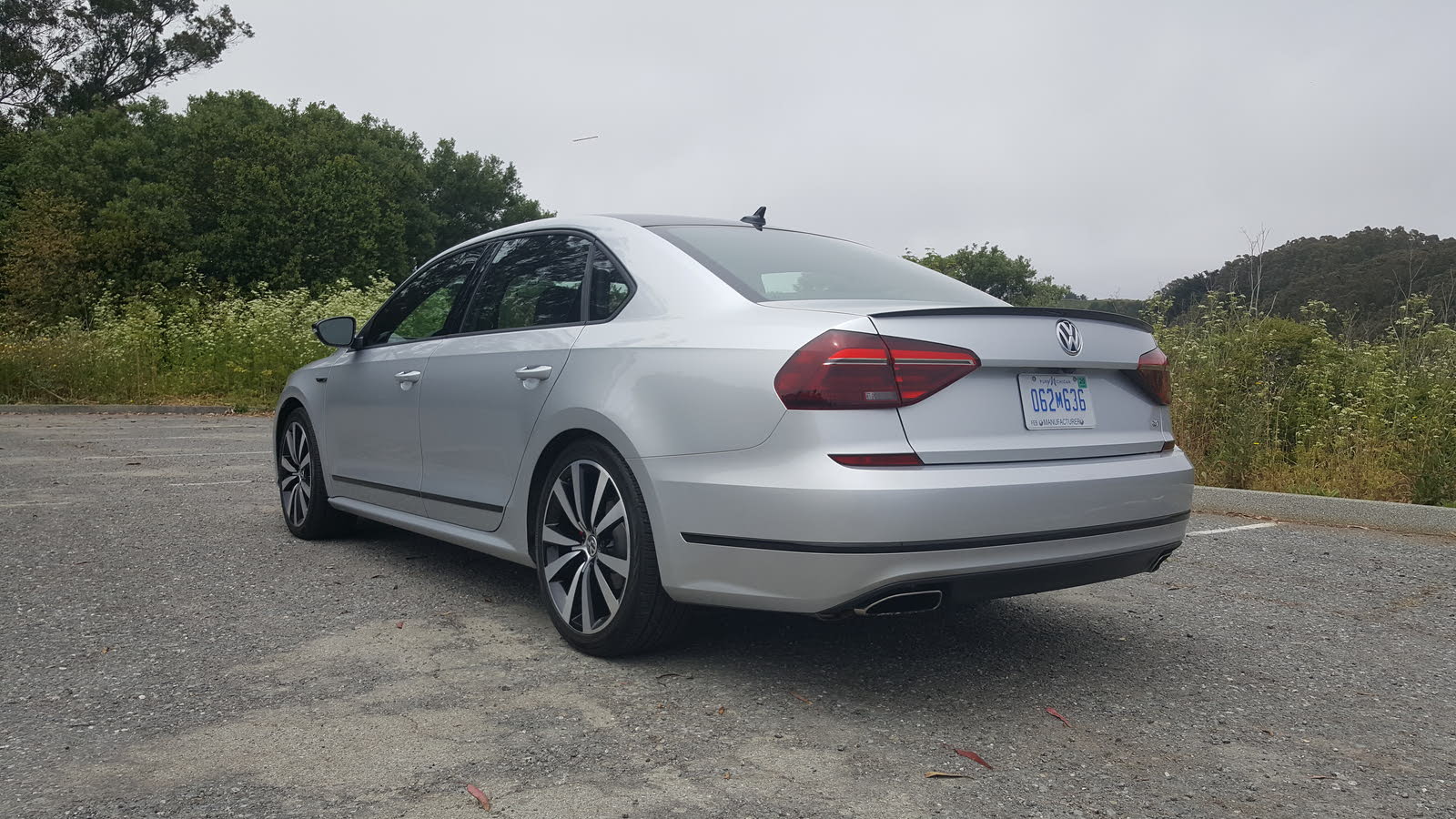 At this point, the only real competition for a V6 Passat is the Camry. And while that car offers features unavailable in the Passat (like adaptive cruise control), it also costs thousands of dollars more. With the upgraded engine, the new GT trim, and a price that keeps things very competitive, the Passat is my choice for a midsize sedan. With the next generation coming right around the next bend, things will only get better.

What's your take on the 2018 Volkswagen Passat?

GuruTHBM8 Dear William, whats your suggestion between passat and BMW 320i?

Users ranked 2018 Volkswagen Passat against other cars which they drove/owned. Each ranking was based on 9 categories. Here is the summary of top rankings.

Have you driven a 2018 Volkswagen Passat?
Rank This Car

I have passat 2018 but only the small fan which is in the right ,but the large one which is on the right dose not working and my car is overheating.

What Kind Of Oil Should I Use