Most crossovers are more style than substance. The 2018 Subaru Crosstrek flips the script and backs up its outdoorsy image with versatility and capability. 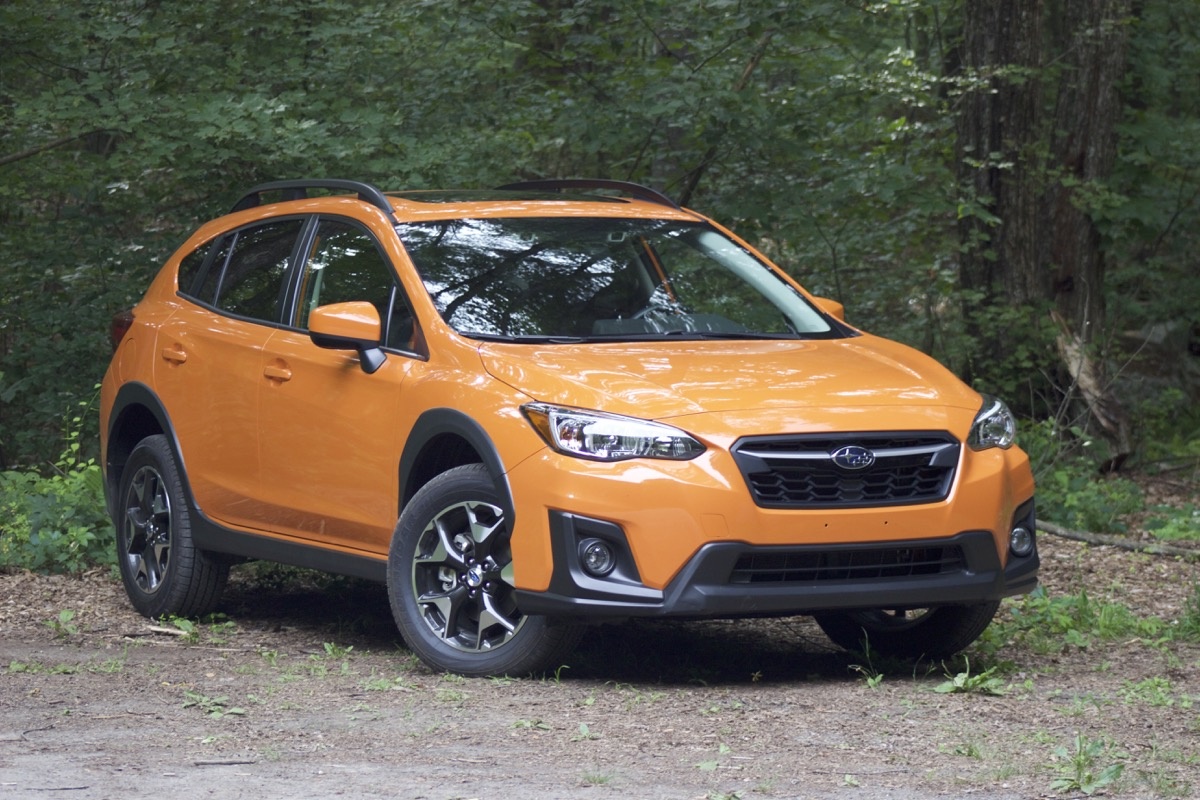 Plenty of crossovers and SUVs look capable, but few are actually 100% up to the task. Sure, some have plenty of cargo space or neat storage features, but few are as truly “outdoorsy” as their image suggests. Subaru is one of the brands with such an image, but its vehicles actually follow through on that image. The shining example of this is the 2018 Crosstrek, a high-riding wagon that's durable and versatile.

Subaru emphasizes practicality above almost anything else, with safety and efficiency following closely. This is embodied to various degrees in Subaru's lineup, featuring the capable Forester and upscale Outback. But the Crosstrek, which is based on the Impreza 5-door, boasts rugged additional body cladding and an impressive 8.7 inches of ground clearance.

The Crosstrek first entered the North American market in 2012 as a 2013 model and was, frankly, an instant hit. Buyers loved the concept of a “beefed-up” Impreza wagon, even if that beef was only more ground clearance and a more rugged appearance. The 2018 Crosstrek is the first full redesign for this popular model, and the emphasis is on evolving the concept. 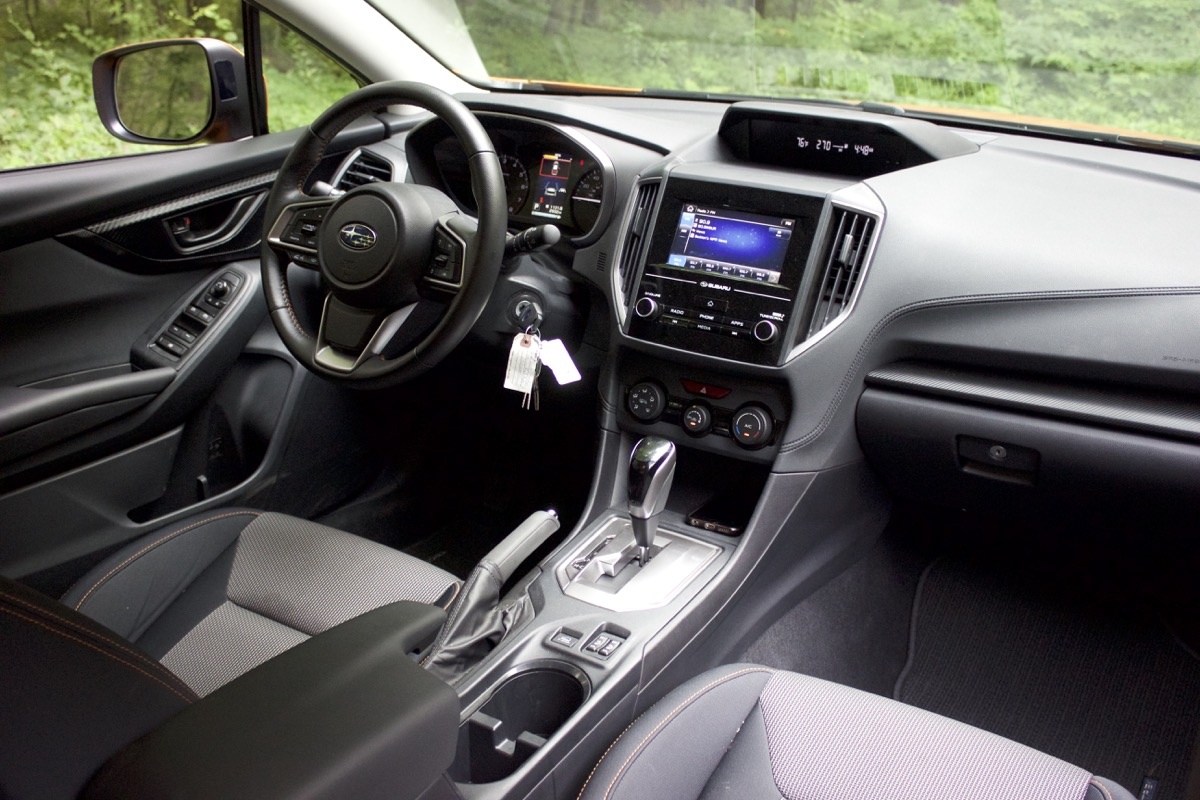 The new Crosstrek’s front end is more SUV-like; it’s taller and more imposing than the sloped front end of the outgoing model. The headlight design is tighter, and the fog-light bezels and wheel arches feature more pronounced, aggressive cladding. Together, its look evokes more of the outdoor spirit Subaru builds into its vehicles.

The interior of the previous Crosstrek was characterized by basic plastic surfaces, and the new Crosstrek is unfortunately more of the same. The cost of presenting a rugged image and backing it up is that interior surfaces have to be able to take a beating, and hard plastic should last longer than the leatherette you’d find in competitors.

There is a faux carbon fiber look to the interior trim that works. Our test model has supportive, firm seats with good bolstering and sharp orange accent stitching. The look pays off, so long as you are going for rugged. You might be afraid to toss a muddy mountain bike in the back of an upscale crossover like the Mazda CX-5, but the Crosstrek will gladly take all sorts of wet, muddy gear.

Trims for the 2018 Subaru Crosstrek are Base, Premium, and Limited. The Base Crosstrek comes standard with 17-inch alloy wheels, integrated roof rails, and little else—manual seats, power windows, 60/40 split-fold rear bench, and the 6.5-inch StarLink infotainment system round out the list.

The Premium trim adds fog lights, heated front seats, a windshield-wiper deicer, heated side mirrors, a leather-wrapped steering wheel, and cloth seats with orange stitching. It also comes with auto on/off headlights, and the stereo is upgraded from four speakers to six.

Moving up to the Limited trim, you still get orange stitching, but on leather seats. The Limited also comes with automatic climate control, a large 8-inch StarLink screen, 18-inch alloy wheels, keyless entry with push-button start, and LED headlights that turn with the steering wheel. 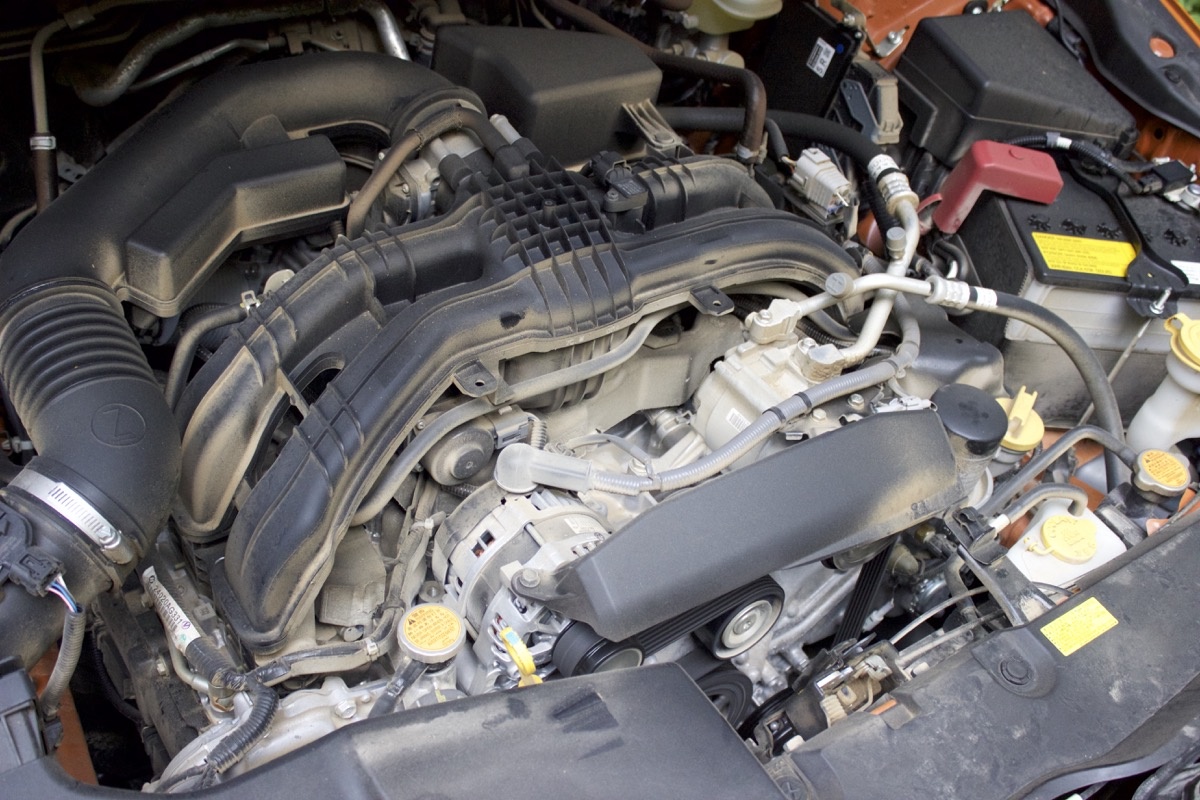 The Crosstrek employs the 2.0-liter 4-cylinder engine from the Impreza hatch. Like all Subaru engines, it’s horizontally opposed, which gives it a low center of gravity. It makes 152 horsepower and 145 pound-feet of torque, sent through either a 6-speed manual or a continuously variable transmission (CVT) to all-weather symmetrical all-wheel drive (AWD).

The manual is standard on the base and Premium, while the CVT is available on those trims, but it's the standard transmission option for the Limited. The version that is optional on the Premium and standard on the Limited comes with steering-wheel-mounted paddle shifters. Considering there are no “gears” in a CVT, these are simulated shift points to emulate a manual shift mode.

With the manual transmission, fuel economy is 23 mpg city, 29 highway, 25 combined. If you opt for the CVT (and many will), fuel economy improves to 29 city, 33 highway, 29 combined. In our time testing many cars, the general consensus is that many cars are unlikely to live up to fuel-economy projections. But in our week with the Crosstrek, we were very impressed to observe fuel economy of 31 mpg.

Perhaps one of the biggest surprises with the Crosstrek is its driving dynamics. Although it’s far from a sports car, it accelerates well. CVTs typically have an “elastic band effect” that plagues acceleration, but Subaru has really dialed in its CVT. There are some limits to acceleration when you’re at cruising or highway speeds, but the Crosstrek has a nice jump off the line that will pay dividends in real-world city driving.

Subaru seems to have addressed the issues that were associated with the first car, including improving the CVT. It’s still not perfect at accelerating from 50 to 80 miles per hour, but it is an improvement. One of our own staff members noted that his personal Crosstrek’s suspension almost feels brittle at times. There is none of that feeling on the new car, and it feels rather composed.

In cornering, the Crosstrek stays level, and steering is responsive and direct, yet it absorbs shocks in the road very well. Think about areas that have poor roads, like Boston, Vermont, or Michigan, and you can see how the Crosstrek is the ideal car for all seasons.

X-Mode and Hill Descent Control are optional on Base and Premium trims and standard on the Limited. Hill Descent Control modulates the ABS and throttle to act like cruise control for the trail. X-Mode has been previously featured on the Outback and Forester and gives Subaru some decent off-road chops compared to other small SUVs and wagons. X-Mode works with the accelerator, brakes, and Vehicle Dynamics Control to reduce power to the wheels to the point where the car can get positive traction. X-Mode is ideal for going into gravel, sand, or mud, and can even be used for snow.

Take all that together, and you get a general feeling of total composure. The Crosstrek is quite responsive and handles well but has just a bit of softening over all its dynamics to make it a more appealing car to the masses. 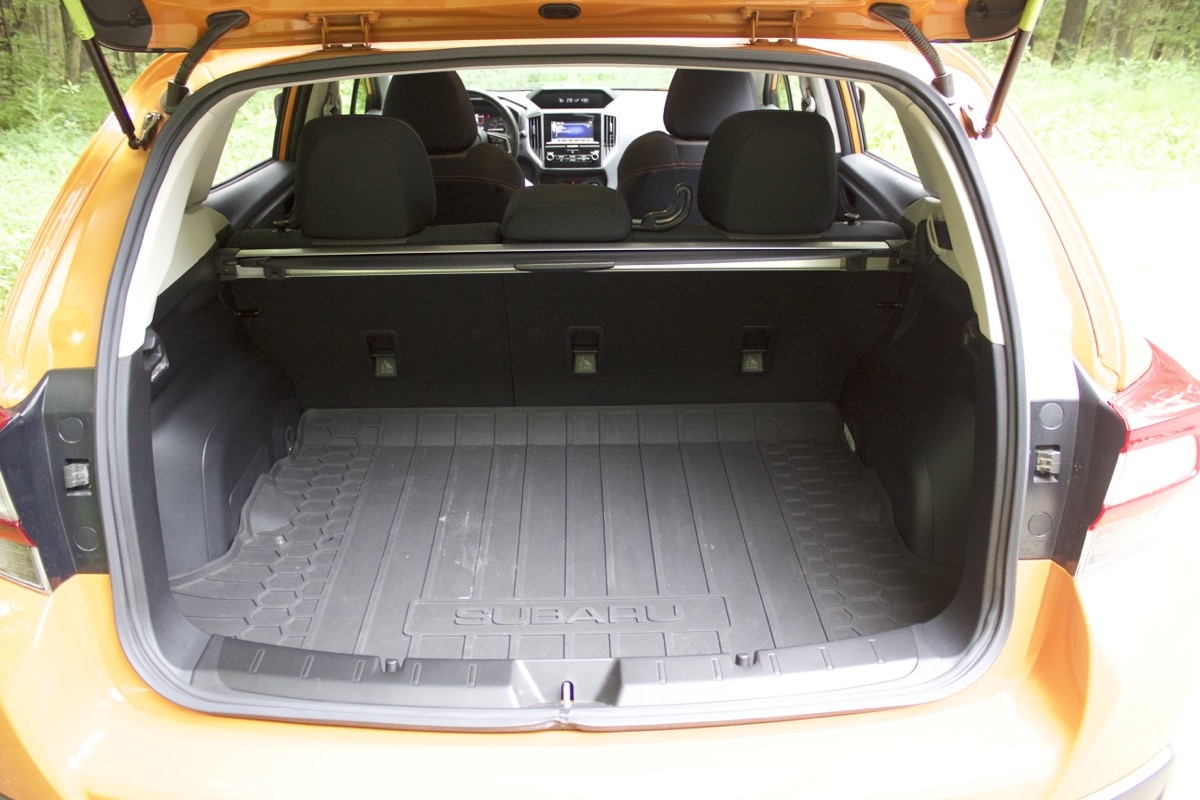 Backseat space is pretty solid; the Crosstrek actually provides more head- and legroom than some compact SUVs, like the Mazda CX-5. In all, the Crosstrek has enough space for people and cargo to make it useful on the daily commute and the weekend getaway. 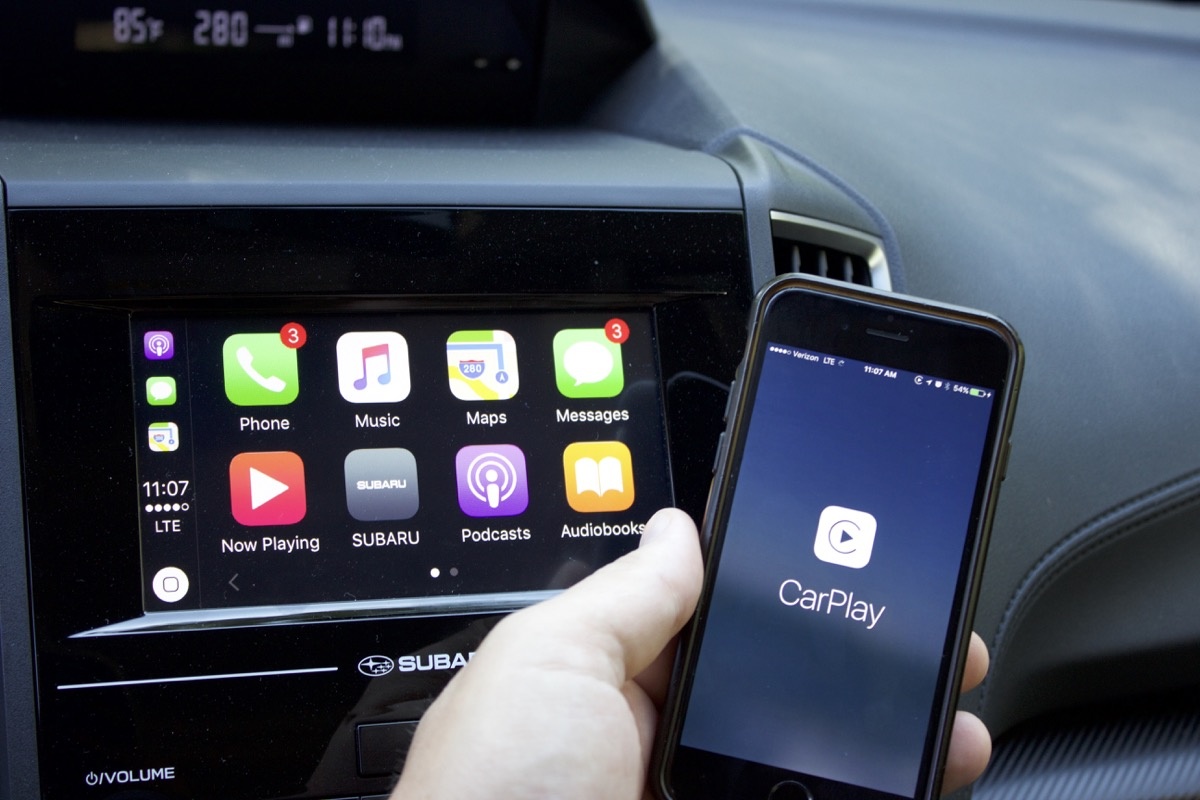 Subaru’s infotainment system is called StarLink—a reference to the brand’s constellation logo. The Base and Premium come with a 6.5-inch touchscreen, while the Limited comes with a larger 8-inch screen.

The StarLink screen is easy to use, featuring bright, multicolored icons and easy-to-read fonts. Below the screen is a helpful Home button, and it's joined by Radio, Media, and Apps buttons for quick navigation through the menus.

StarLink even lets you create shortcuts on the home screens to items you use a lot. I quickly made a shortcut for Bluetooth Audio so I could play music off my phone with the push of a button.

The Premium test version we drove did not have navigation, but we were able to connect an iPhone to use Apple CarPlay. This also allows for easy access to podcasts, music apps like Spotify, and of course, Apple Maps to navigate. The benefit of apps like CarPlay and Android Auto is that you don’t need to spend the extra money on packages like a navigation system, and more automakers are offering them as standard or optional features every year. 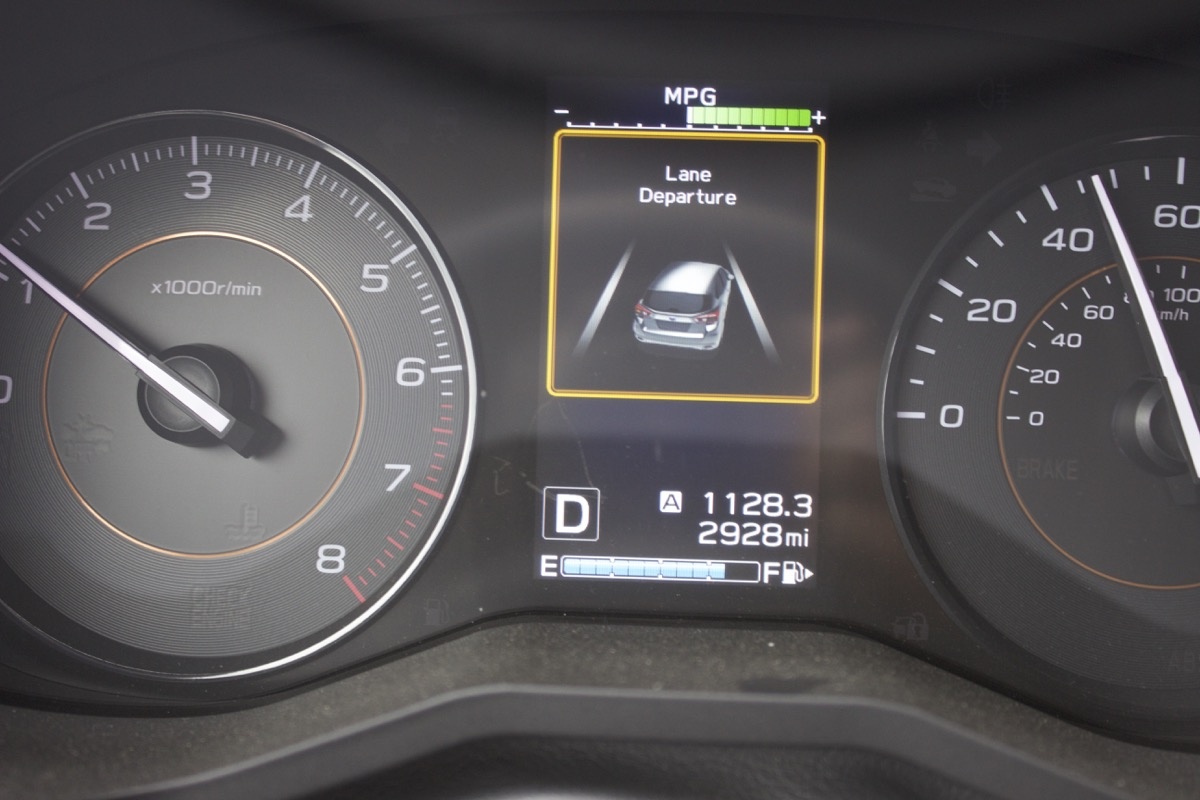 The Crosstrek comes standard with a full array of front and side impact airbags, a reversing camera, tire pressure monitoring system, LATCH child-seat anchor system, and vehicle dynamics control with traction control. The Crosstrek is also available with Subaru’s EyeSight safety system. EyeSight is a suite of safety tech that employs a pair of cameras and works with other vehicle sensors. The system provides forward-collision avoidance, lane-departure warning, adaptive cruise control, lane-keeping assist, and sway warning.

You can also get options like automatic high beams, blind-spot detection with rear cross-traffic alert, and reverse automatic braking, which can stop automatically if you are reversing into an obstruction. 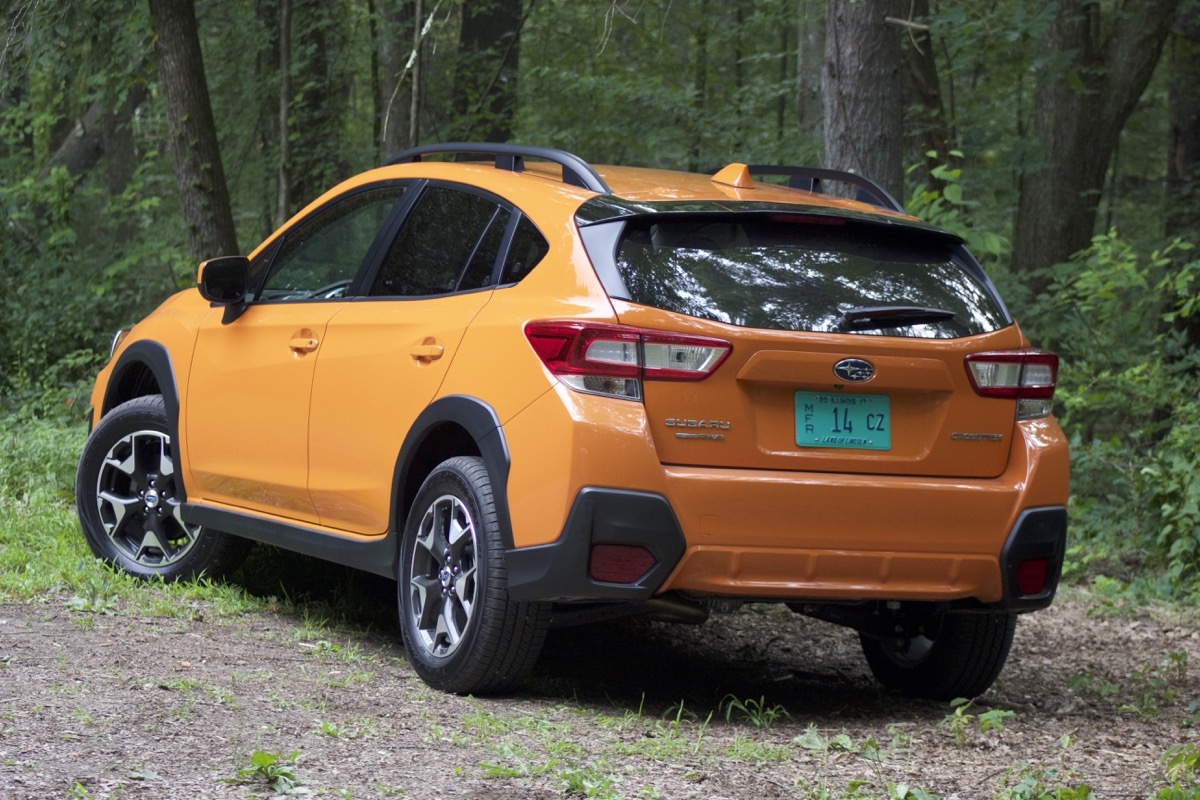 That pricing never felt like the buyer would be paying too much. At the Base trim or the top end of the lineup, the Crosstrek is a good deal. Sure, the interior sometimes feels basic, but you’re still getting a lot of car. It handles surprisingly well, has solid acceleration, and can tackle snow and mud. Additionally, it has the latest safety and infotainment tech and an interior you won’t mind tossing gear into.

Some crossovers present an image but end with that image. The Subaru Crosstrek backs up the hype, because it puts substance, and how people actually live with their crossovers, above its image.

What's your take on the 2018 Subaru Crosstrek?

Users ranked 2018 Subaru Crosstrek against other cars which they drove/owned. Each ranking was based on 9 categories. Here is the summary of top rankings.

Have you driven a 2018 Subaru Crosstrek?
Rank This Car

How Are Vehicles Listed?

A car is listed at a dealer as being there for 67 days but on car gurus for 213 days. I do not understand the discrepancy. Was the vehicle somewhere else on CG??

I am in the market for a car for my daughter. I have been looking on CarGurus. Since I have already used CarGurus to previously buy and sell vehicles, I am fully aware of the process involved. Satu...

Anyone Having Paint Chipping On New(ish) Subarus? I Have A 2018 Crosstrek ...

Does This 2018 Crosstrek Limited Come With Navigation?

Looking for a limited with navigation

Coming To A Stop, You Can Notice A Small "jump" When Shifting From Second T...

I have noticed that when coming to a stop in a very gentle way, the shifting from second to first is coming a little bit too early and you can notice a small "jump" when the shifting comes in. You onl...