The Armada returns for 2018, one year after a full redesign, with some enhanced technology that adds luxury. 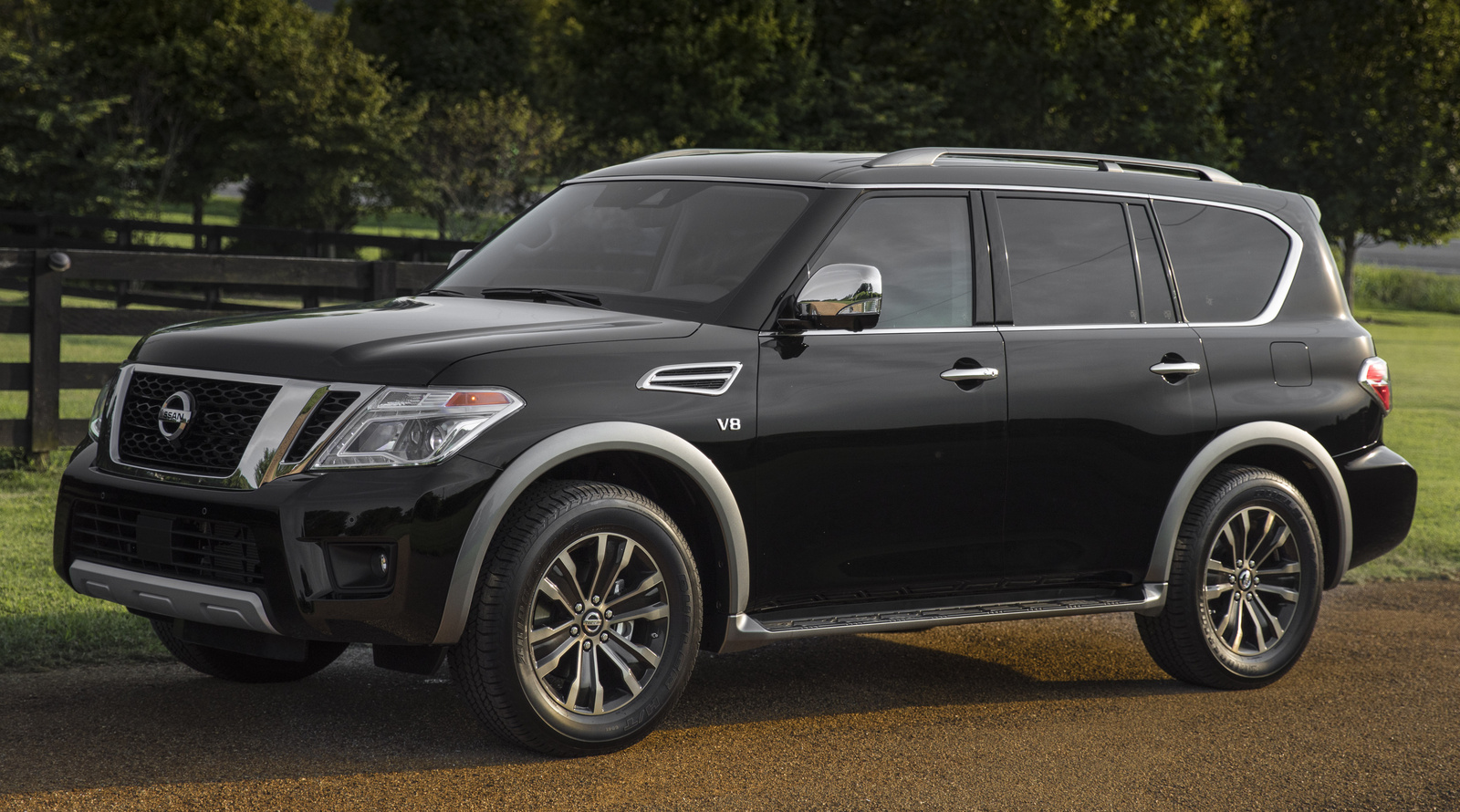 People lamented the redesigned Armada's lack of off-road prowess, despite it now being based on the very capable Patrol, but Nissan has transformed the Armada into a large, luxury SUV. Rather than sitting on the accomplishments of yesteryear, Nissan returned to the drafting board for 2018 to add some extra technology to the standard features list. Sadly, off-road capability has remained the same, but the Armada is adding fresh features faster than consumers can remember to criticize. 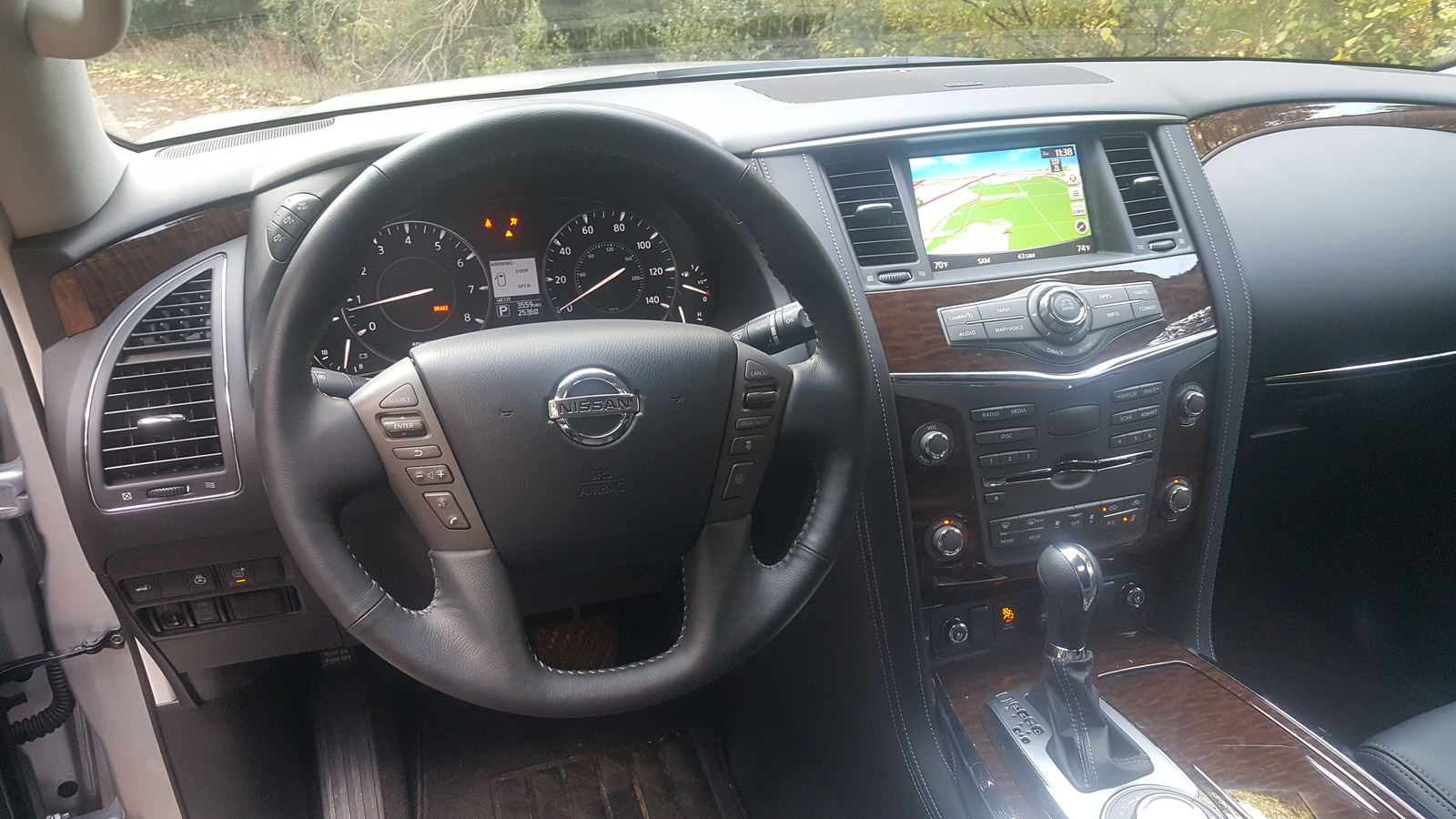 With extra standard tech features this year like an 8-inch touchscreen display with HD Radio and NissanConnect telematics services, plus some additional USB charging ports, the Armada’s base SV trim increases in price to $46,090. For that you’ll enjoy auto LEDs, dual-zone auto climate control, parking sensors front and rear, a 13-speaker Bose stereo, heated power seats, navigation and 18-inch alloys with a full-size spare. You also get roof rails, full-length functional running boards, keyless entry and ignition and a rear-view camera. A Driver’s Package will add power for the 60/40 third-row bench seat and liftgate, an auto-dimming rear-view with HomeLink integration, fog lights and a towing harness, and the great news here is that the price drops in 2018 from $1,120 to just $600. Add $2,900 to your bill and you can upgrade from front-wheel drive (FWD) to all-wheel drive (AWD).

The SL trim starts at $50,850 and adds a very helpful 360-degree top-down camera, leather, remote engine start, power for the tilt-and-telescoping steering wheel, driver memory functions and auto wipers, plus the wheels grow to 20 inches, which seems the minimum appropriate size, aesthetically. A Technology Package further enhances safety with adaptive cruise, blind-spot monitoring and warning, plus forward collision warning with avoidance braking front and rear, and the price goes up this year from $1,700 to $2,200, but it also includes a power-sliding moonroof—previously a standalone $800 option, so you’re technically saving $300 here.

With the $62,090 Platinum trim the Technology Package is included, and you’ll get ventilation for the front seats, unique 20-inch wheels, a rear entertainment system with dual 7-inch monitors, and power-folding heated mirrors with puddle lamps and integrated signals. Safety is further enhanced with lane-departure warning and intervention, and if an 8-person capacity isn’t necessary, $450 second-row captain’s chairs are a nice touch, along with the accompanying second-row console. The Platinum Armada I tested wasn't fitted with these, but with the $2,900 jump up to AWD, $310 carpeted floormats and a $1295 destination charge, the final price came to $63,695. The only option left was a Reserve Package ($3,000) which would have further added unique 20-inch wheels, dark chrome exterior and real wood interior trim, upgraded 2-tone leather with contrast stitching and Reserve badging. 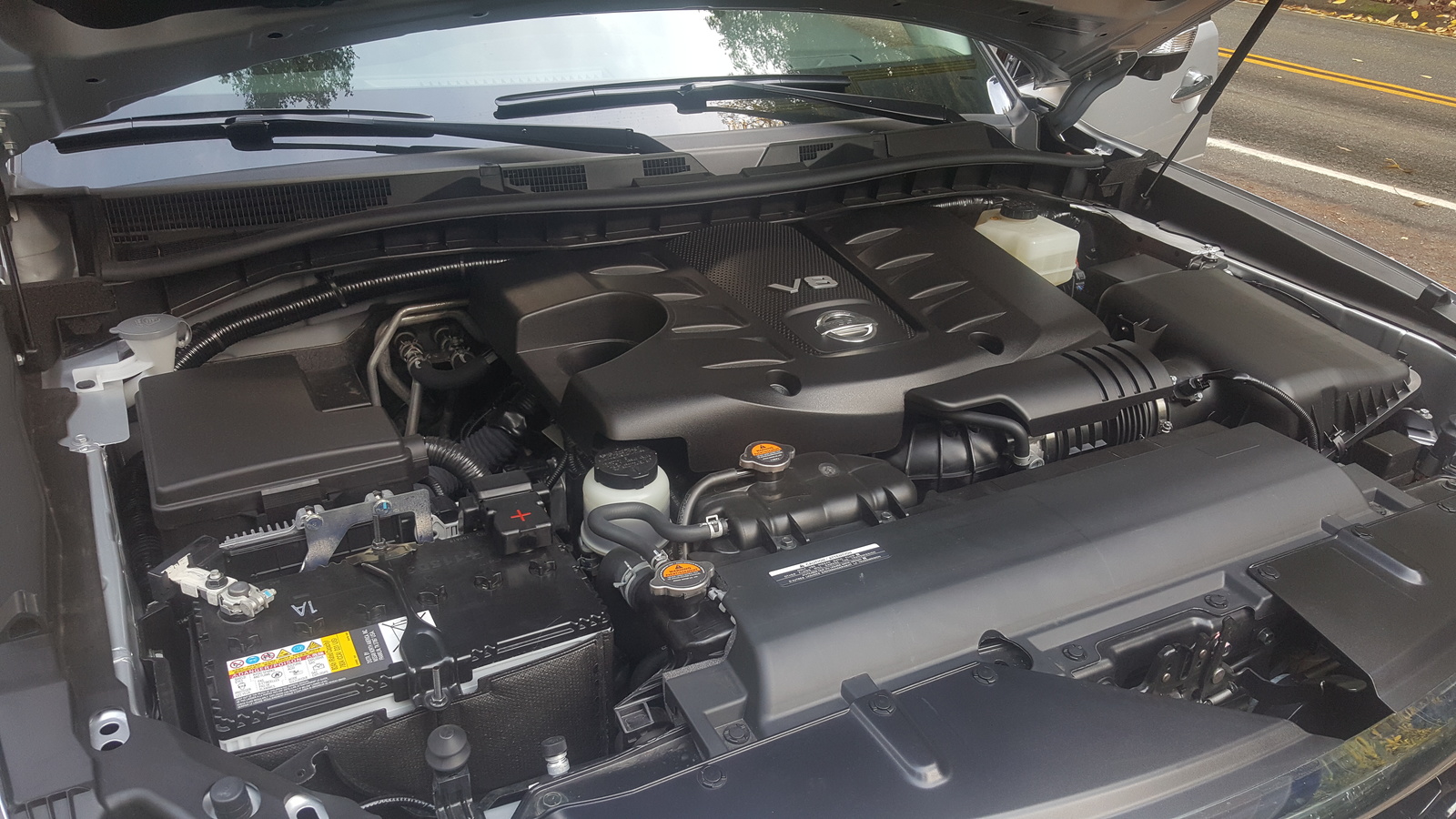 With every Armada getting a 5.6-liter V8 tied to a 7-speed automatic transmission, you shouldn’t expect to be impressed with regard to fuel economy. Even the stated rating for FWD Armadas of 16 mpg combined (14 mpg city and 19 highway) is below average for the category, and if you go for AWD, you can subtract 1 mpg in every column. Still, my averages fell 3-4 mpg short of estimates, though I did indulge in the Armada's 390 hp and 394 lb-ft of torque.

Had I been towing, things would certainly have been worse, though it’s good to know capacity stands at an impressive 8,500 pounds should the need arise. What surprises me is that peak torque doesn’t arrive until 4,000 rpm, meaning you’re not getting the stump-ripping immediate power you’d expect from a honkin’ V8. Still, with a 6.5-second 0-60 time the Armada is fast, especially since it has to drag around 5,600 pounds. Truly, stomping on that accelerator is the best way to get smooth performance out of the Armada. It’ll get you quickly up into that power band and you’ll avoid some of the low-speed juddering and jumping I’ve experienced from the Armada’s 7-speed when crawling up very steep hills around the Bay.

Nine inches of clearance, a low-range gear and a capable 50/50 torque split means the Armada isn’t wholly incompetent when fitted with AWD, but any Patrol-inspired visions of overland adventures should be put to rest. The Armada is better at hauling a boat or doing some dirt-road car camping than blasting across the Serengeti. 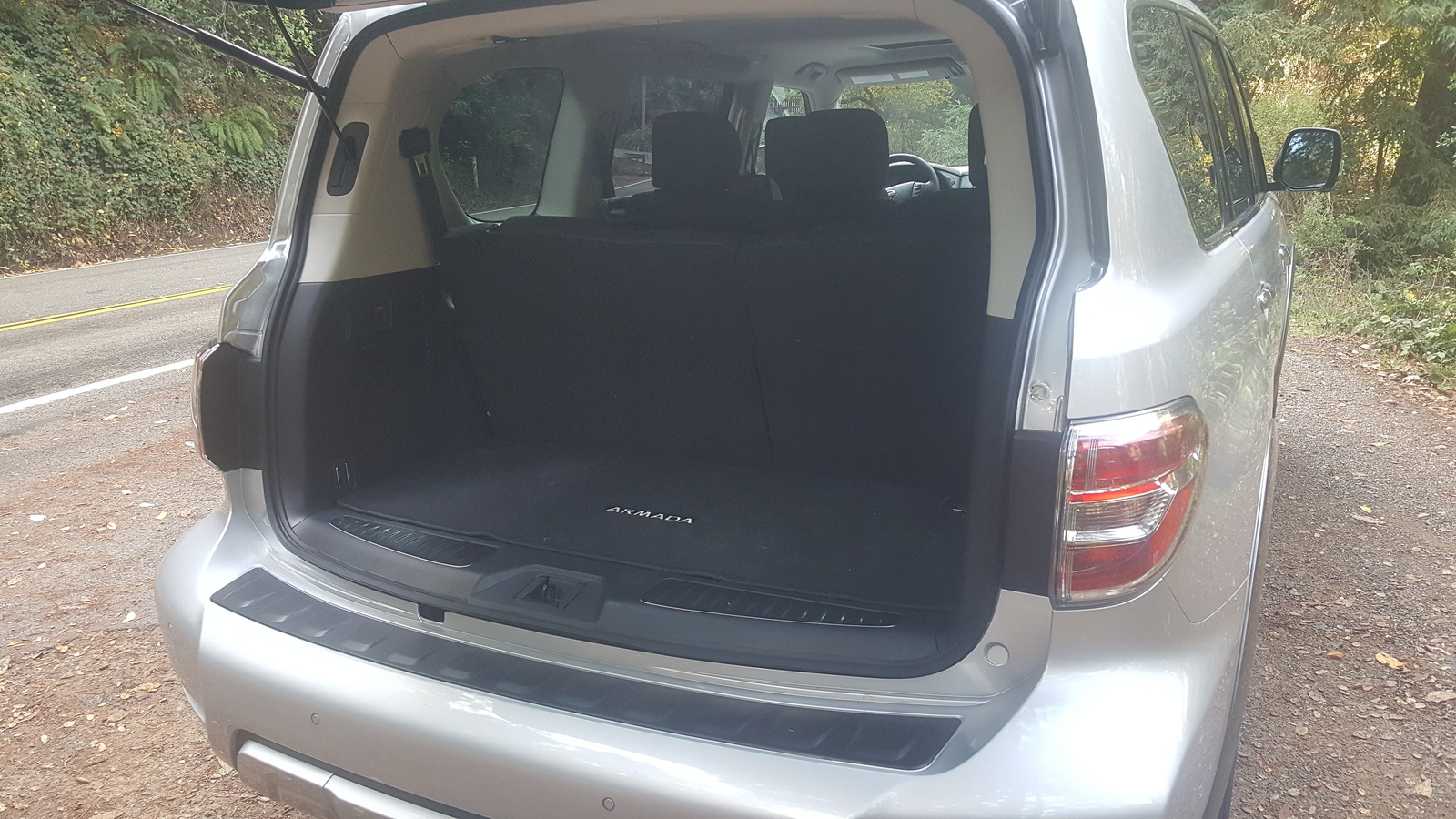 In the Armada’s aim to become more road-friendly, it’s given up most of its off-road ability. Given the percentage of shoppers who end up taking their SUV offroad, this is a good move, despite enthusiast grumbles. In place of off-road superiority, you’ll get better on-road manners, better fuel economy, and more luxury. This year that comes in the form of tech, with the newly standard 8-inch touchscreen with HD Radio and NissanConnect, but don’t ignore the rest of the cabin. High-quality materials and competitive fit and finish with an attractive design set the Armada aside in a segment that can get a little boring.

Storage and towing is a different story, with the Armada landing around the middle of the pack. An 8,500-pound maximum towing capacity is still very competitive, despite being 500 pounds less than the 2015 Armada’s 9,000-pound rating, but storage capacity of 95.4 cubic feet is better than the regular-length versions of the Tahoe/Yukon, but significantly less than the XL versions of the same. Even the standard Expedition bests the Armada at 108.3, but it’s the Sequoia that really buries the competition with 120 total. If internal storage and space are your primary concerns, head to a Toyota dealership, especially if you plan to host actual occupants in the third row. While the Armada’s third-row seats are certainly a tight fit and nowhere near the comfort of the examples in the Expedition XL or the Sequoia, they are large and comfortable enough for your adult friends who land on the smaller side of the spectrum. 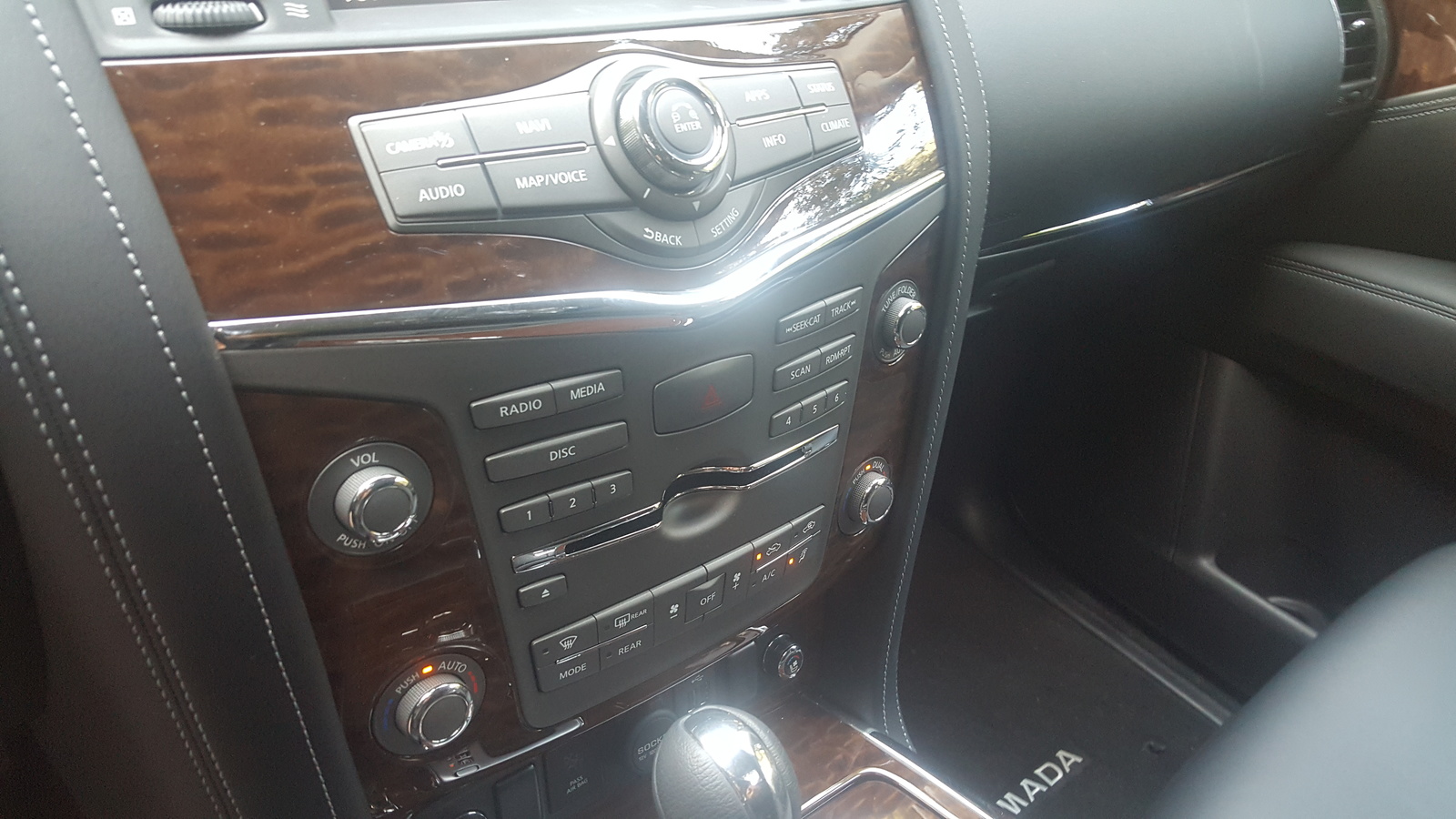 The Armada’s already impressive suite of standard tech is bolstered this year by an 8-inch touchscreen with HD Radio and NissanConnect, not to mention extra USB ports sprinkled throughout the cabin. With standard parking sensors front and rear, navigation, auto LEDs, and the 13-speaker Bose stereo, you’re quite well equipped even at the base level, but I’d recommend going up to the SL to take advantage of the 360-degree top-down camera, remote engine start and driver memory system. With the Technology package now at a $300 discount over last year (when you factor in the moonroof) you’re really set up to tackle the prodigious blind spots the Armada offers through adaptive cruise, blind-spot monitoring and warning, and the forward-collision warning with avoidance braking front and rear.

Speaking of blind spots, if you move up to the Platinum trim, you can get the Intelligent Rear View Mirror—Nissan’s answer to not being able to see backward through a cabin full of commuters. Press a button and a high-resolution image from a rear-facing camera is projected through your rear-view mirror. It’s a great solution to a very common problem, and I can see more manufacturers adopting this very quickly.

But I’m still confused and frustrated that the infotainment system hasn’t been updated. This is the same system as when the Armada debuted, and it hasn’t even managed to stay current with regard to updates, let alone design. Apple CarPlay and AndroidAuto integration would go a long way toward keeping this relevant, but even those are omitted here. If there’s one reason I’d tell you to wait on the Armada, it’s this. 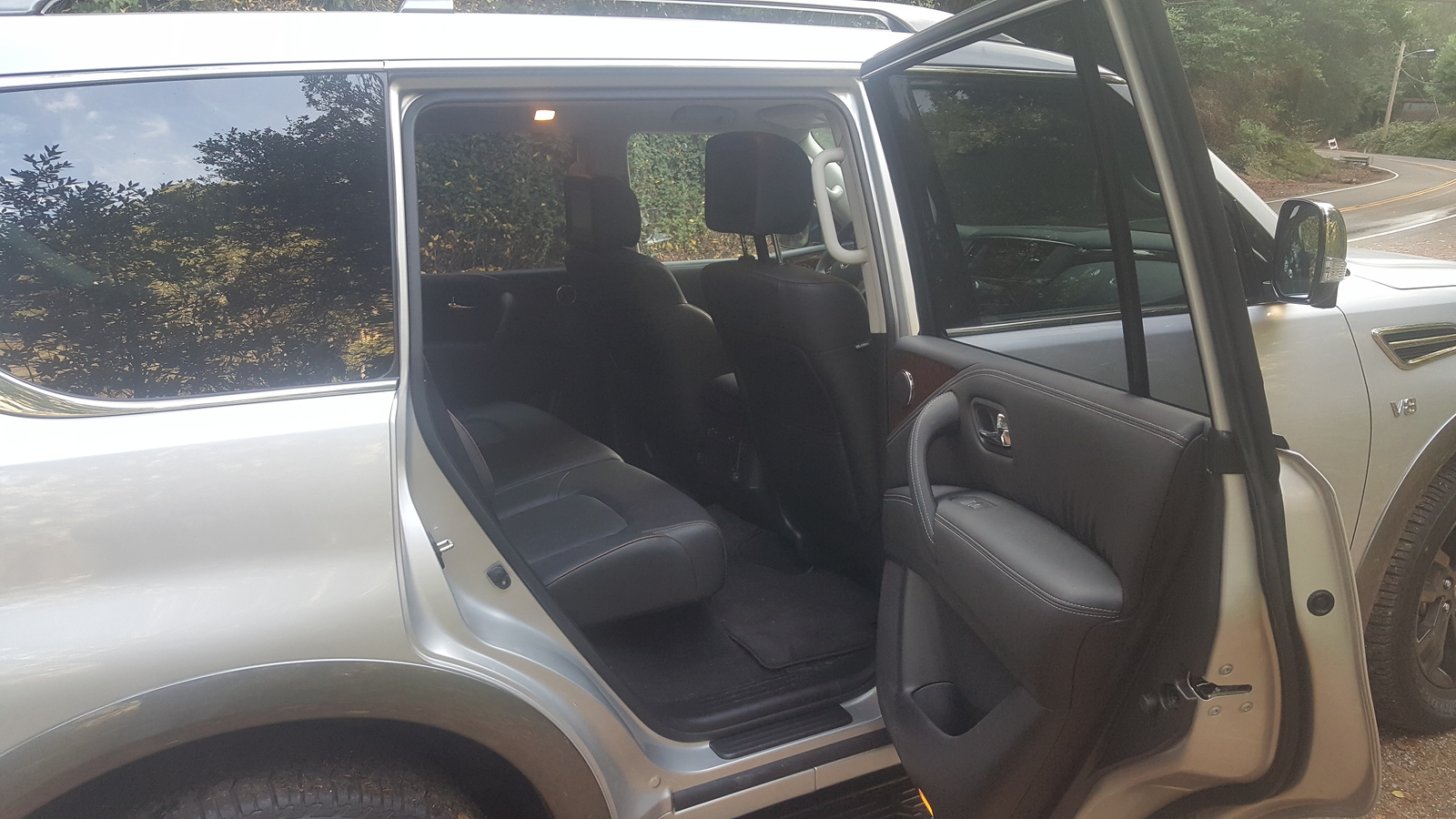 The SL trim with the Tech Package is where you should start when it comes to safety, and thankfully that’s a path with a $300 discount this year, as long as you were planning on a moonroof already. It’s a shame that the base SV trim can’t access most of the safety features and that lane-departure warning and avoidance and the Intelligent Rear View Mirror only come with the Platinum as well—a vehicle this big and burdensome shouldn’t be handicapped when it comes to available safety.

Thankfully, braking hasn’t been compromised depending on trim, with every Armada capable of a stop from 60 mph in just 115 feet. That’s an astonishing distance for a potentially 6,000-pound vehicle.

Crash-test evaluations have not been performed by the National Highway Traffic Safety Administration (NHTSA) or the Insurance Institute for Highway Safety (IIHS). 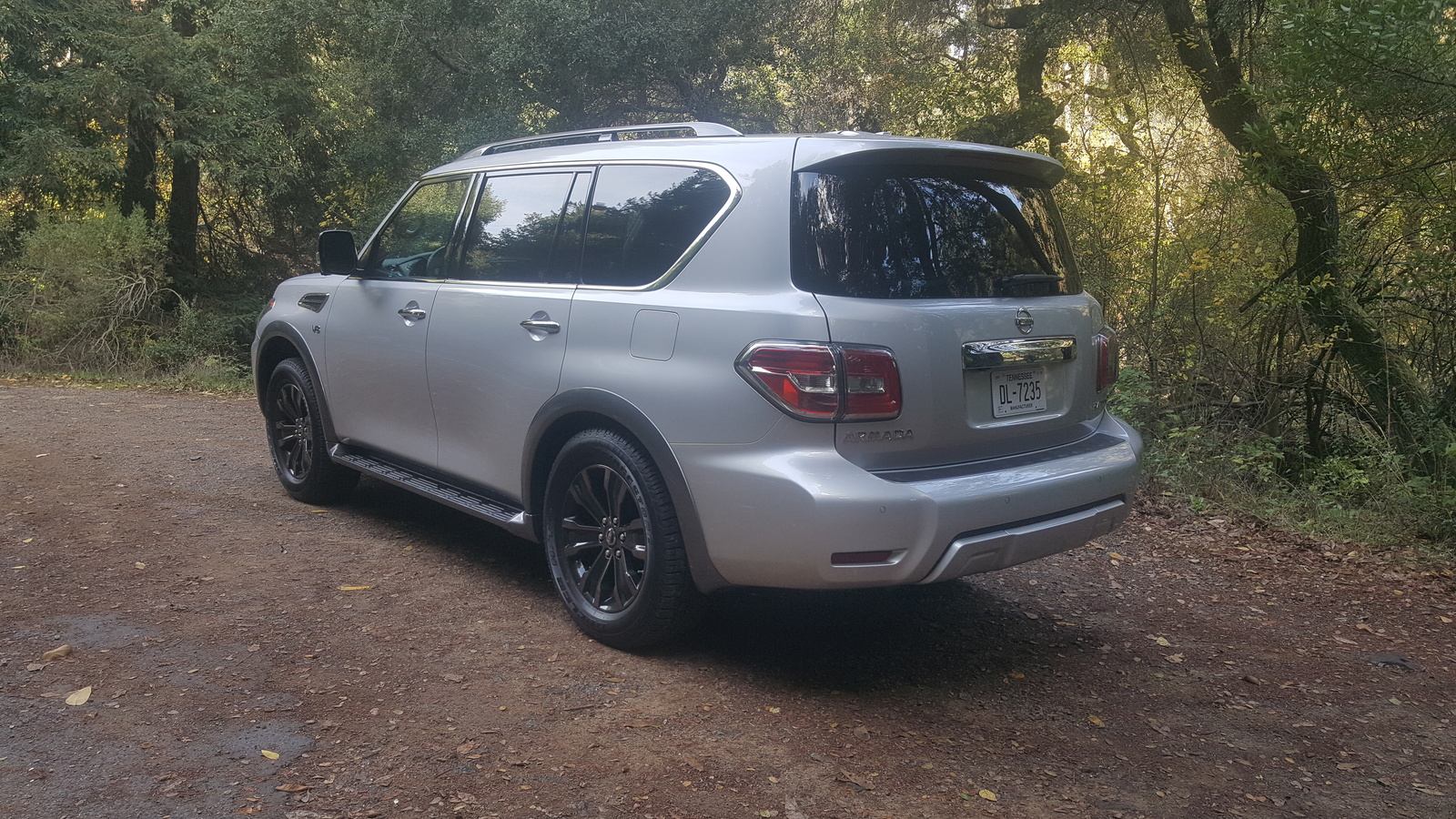 This is a confusing segment, and one that’s hard to parse out, as any given consumer could be coming here for a wildly disparate set of needs and wants. One is looking to truck around an entire den of Boy Scouts, another needs to haul a boat, while a third has a 6-adult commute to make every day. Thankfully the Armada can handle all beautifully, and at a price that’s very competitive. If you fall into the third category, the Sequoia may be a better bet with much more space but a slightly less luxurious interior.

However with the infotainment system still a major drawback, I’d worry that any money I’d save would quickly be erased by disappointment—either when the new system comes out or as this system continues to be left behind by the competition. The difference will be determined by your priorities.

Users ranked 2018 Nissan Armada against other cars which they drove/owned. Each ranking was based on 9 categories. Here is the summary of top rankings.

Have you driven a 2018 Nissan Armada?
Rank This Car

I cannot get the text services to work in my new Armada and I’m frustrated. My device is connected and I’m using Bluetooth with no issues. I can call out and give commands. Except speak to text. V...

We’ve got a 2018 platinum Armada and it drives me nuts that the movies play automatically when the ignition is started. So it’ll run through an entire movie if no one is in the backseat to remind ...

Foot on brake, push button start and all panel lights come on without starting. Brake doesn't go all the way down. After a few times it will start.

Has Anyone Used A Performance Chip Module?

I have been looking at various Performance Chip Modules to increase the MPG of my 2018 Armada. Just wondering if anyone has used something like it and what results you have seen. On top of that, any...

I have a 2018 Armada with an intermitten push button starter problem. Get in and puch the button nothing happens. I must get out of the car and use the remote start option to get it started.