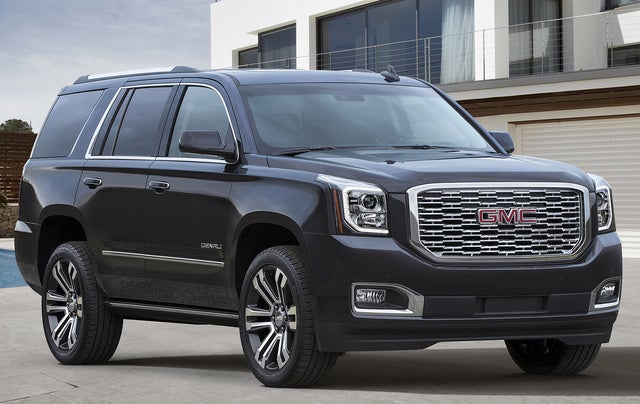 The GMC Yukon—and the Chevrolet Tahoe upon which it’s based—has been around in its current form for some time now, but GMC has continued to refine its full-size SUV to fit modern tastes and needs. The Yukon fills the gap for those customers who want a bit more luxury to go with the utility provided by the Tahoe. While there don’t yet seem to be any major changes to the regular Yukon lineup for 2018, GMC has announced a significant refresh for the high-end Yukon Denali line—and with Denalis making up half of GMC’s Yukon sales, it’s an important update.

For 2018, the most notable change to the Yukon Denali is a new sculpted, higher-flowing grille flanked by high-intensity discharge (HID) headlights and LED signature lighting. The updated grille allows more airflow to the radiator than before and now features active shutters, which will close when the vehicle is at speed in order to reduce drag and increase efficiency. Other updates include a newly available premium wood trim and a 10-speed automatic transmission.

Under the hood of the Yukon Denali is the familiar 6.2-liter V8 engine, rated at 420 hp and 460 lb-ft of torque. The big news, of course, is the new 10-speed automatic transmission jointly developed by Ford and GM. It has slowly made its way across the model ranges of both companies over the course of this year and is now featured on the Denali, where it replaces last year’s 8-speed automatic transmission. Fuel-economy figures aren’t out yet, but the new transmission and active grille shutters will hopefully result in a noticeable bump to the 2017 model’s 15 mpg city, 22 highway, and 17 combined rating.

In addition to the all-new premium wood trim, the 2018 Yukon Denali comes with active noise cancellation, heated and ventilated front seats, heated second-row seats, power-folding third-row seats, 4G LTE Wi-Fi capability, wireless phone charging, and a power liftgate. Denali models also add a better sound system and are available with retractable side steps, a roof rack, a sunroof, and a rear-seat entertainment system. The Yukon’s luxurious cabin feels almost cavernous, with ample space for up to 9 people. It offers 15.3 cubic feet of cargo space behind the third row, 51.7 cubic feet behind the second row, and 94.7 cubic feet when both rows are folded.

Although many buyers are perfectly willing to fork over the extra money for the premium Denali trim, the 2018 Yukon will also be offered in SLE and SLT trims. Base Yukons should still come with a 5.3-liter V8 engine rated at 355 hp and 383 lb-ft and either rear-wheel drive (RWD) or 4-wheel drive (4WD). It’s a bit too big to be a serious off-roader, but it should handle camping and runs around the ranch just fine, and RWD models are a solid choice when it comes to towing capabilities. Useful features include a tow/haul mode, trailer-sway control, automatic grade braking, and hill-start assist, and the Yukon does have an automatic locking rear differential for tough terrain. The Yukon is also available with Magnetic Ride Control. 20-inch wheels are standard, but large and flashy 22-inchers are available.

The 2018 Yukon is expected to arrive at dealerships this fall.

Users ranked 2018 GMC Yukon against other cars which they drove/owned. Each ranking was based on 9 categories. Here is the summary of top rankings.

Have you driven a 2018 GMC Yukon?
Rank This Car

What Is The Difference Between Summit White And White Frost Tri Coat In Yuk...

Air Quality In The Cabin

When re-circ is on, I can still smell a lot of exhaust and outside smells. How can this be avoided? I have driven other cars that do not do this. I have heard there is an air filter located behind ...

hello, my son manually flipped the door latch of my 2018 yukon denali, thinking he was putting on the child lock. now i cannot shut his door because i cannot get the latch to flip back. have pressed...

I Purchased The Upgrade

I purchased the upgrade and it is not showing up to my listing is several pages later ??

How to see on the instruments panel the number of gallons used on a Yukon Denali 2018?