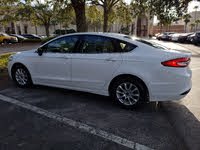 A family sedan that offers an extraordinary amount of variety within its lineup, the 2018 Ford Fusion remains one of the better midsize cars you can buy, even though it hasn’t been completely redesigned in more than half a decade. 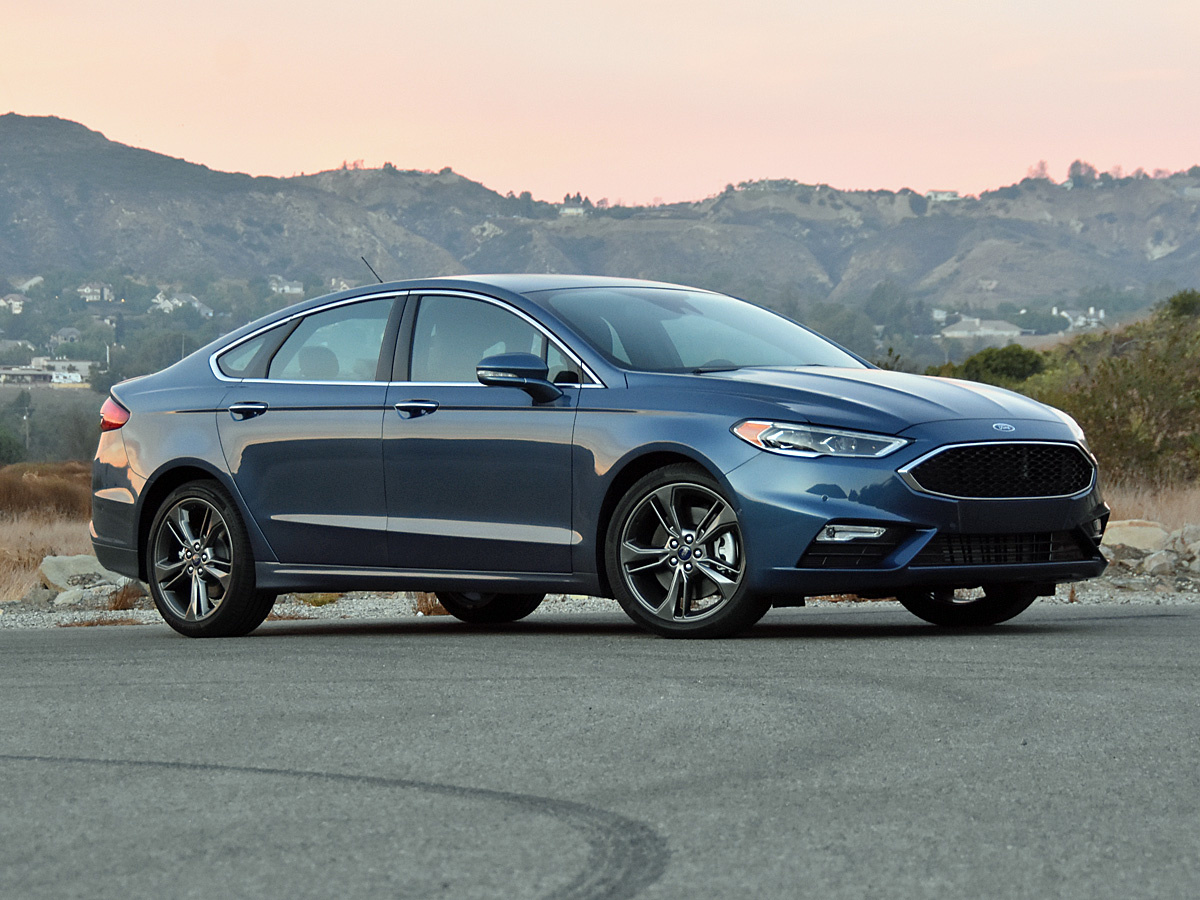 Want a basic but stylish car? How about a hybrid, or even a plug-in hybrid? What about an undeniably luxurious sedan, or a genuine sports sedan? The 2018 Ford Fusion lineup has them all, ranging in price from just over $22,000 all the way up to just under $44,000. 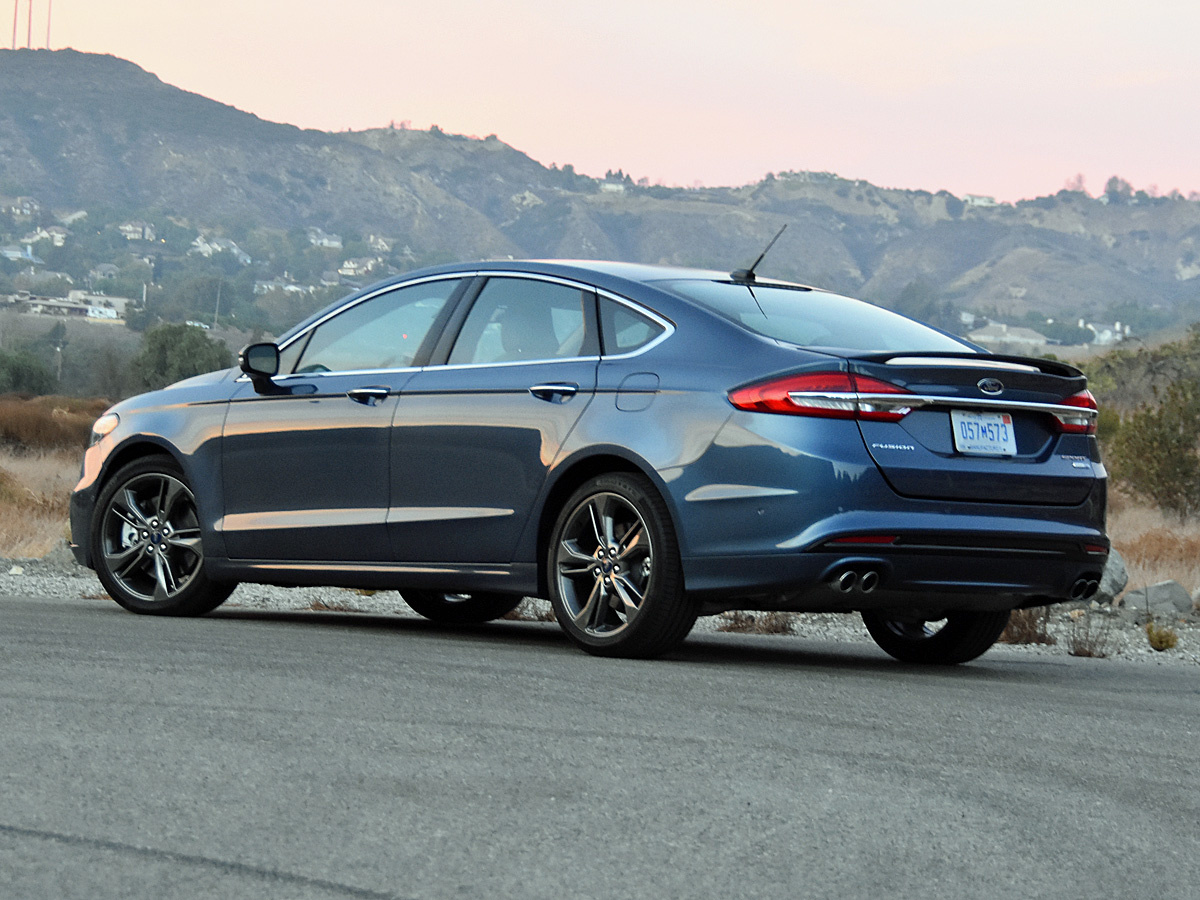 Back in the early 2010s, Ford proved with the redesigned 2013 Fusion that a family sedan could be as stylish as a luxury car, as efficient as an economy car, and as enjoyable to drive as a European car. That latter trait is no coincidence. In Europe, the Fusion is called the Mondeo, and it is available in a devastatingly handsome estate wagon body style.

Half a decade later, here we are, reviewing a 2018 Ford Fusion Sport, the only legitimate performance sedan you can buy in the mainstream midsize sedan segment.

How can I say that?

Name another car in this class that makes 325 horsepower and 380 lb-ft of torque, fed to an all-wheel-drive (AWD) system and featuring an adaptive damping suspension.

You can’t. The Fusion Sport is the only one.

The firepower isn’t cheap, of course. The Fusion Sport’s price starts at $34,625, and that’s before adding extras like a Sync 3 infotainment system, dual-zone automatic climate control, a premium sound system, a navigation system, added comfort features, or any of the Fusion’s available driver-assistance and collision-avoidance technologies.

Of course, if you could care less about performance, the Fusion lineup offers plenty of variety. The standard version is the S, starting at $22,995. The popular version is the SE, priced from $24,270. Titanium trim adds an upscale flavor for $31,270. And slotting in over the Sport is the loaded-up Platinum trim, delivering luxury on a budget at $37,770.

Hybrid versions of the Fusion are available in all trims except Sport, and they’re rated to get 42 mpg in combined driving. Plug-in hybrid versions are called the Fusion Energi, and come in SE, Titanium, and Platinum trim, all supplying 97 MPGe thanks to about 20 miles of electric driving range before reverting to gas-electric hybrid operation.

Speaking of which, my test vehicle looked terrific in new-for-2018 Blue Metallic paint. I am not, however, a fan of the gray wheels. The finish is fine, especially because it does an outstanding job of hiding brake dust, but the design is rather delicate for what is supposed to be the most exciting version of the Fusion you can buy.

All Fusion Sports have carbon-pattern interior trim and an Earth Gray over Black color scheme. Materials are a mixed bag, combining the inexpensive hard plastic that helps to make the car profitable in its base trim level with higher-end finishes that are appropriate for a car at the as-tested price.

Still, the overall look and feel are exactly what you would expect from a mainstream-brand sports sedan, and the performance exceeds standards in the class. 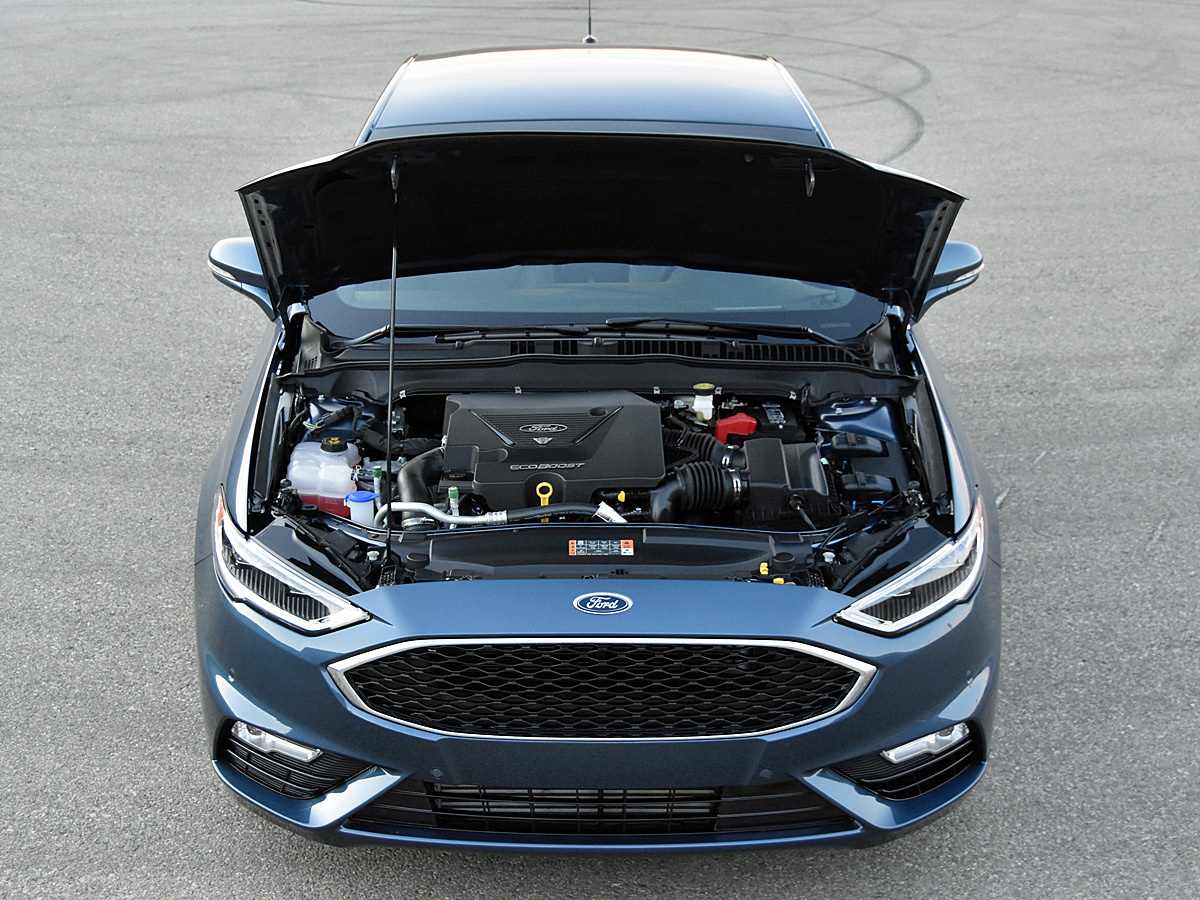 Yes, this car is fast. Based on testing conducted by enthusiast publications, it will get to 60 mph in a few ticks over 5 seconds. Not only does it push you back into your seat, but the twin-turbo V6 also sounds terrific when you mash the accelerator to the floor, a pleasing, guttural note making its way to the cabin as an accompaniment to the rush of speed.

As you might guess, passing power is plentiful, and the Fusion Sport effortlessly rockets up mountains, slices and dices through traffic, and zooms down freeway on-ramps to match the speed of other cars. The AWD system also does an excellent job of transferring engine power between axles, the car scampering out of turns with gleeful enthusiasm.

Switch the car into Sport mode and the suspension firms up, the steering feels heavier, the 6-speed automatic transmission responds more quickly, and the throttle reacts like a caffeine junky. Each trait serves the Fusion Sport well on writhing back roads, where it is quite fun to hustle.

The thick windshield pillars are a liability when bending into corners, the rev-matching paddle shifters sometimes fail to deliver desired downshifts due to Ford’s software algorithm, and the suspension remains a bit soft when rounding curves with uneven pavement, but the Fusion Sport is nevertheless delightfully flingable.

Deserving of special mention, the car’s brakes resisted fade under serious duress and the pedal itself is perfectly calibrated, making it easy to bleed into progressively more urgent deceleration as conditions warrant. During one particularly rapid deceleration from speed in order to set up for a sharp right-hander, I even momentarily activated the car’s automatic braking-assist technology.

Overall, the Fusion Sport is terrific fun to drive, and it defines the term “bang for the buck,” representing a genuine bargain in comparison to entry-luxury sport sedan models such as the Audi S4, BMW 340i, and others.

However, you should know that I got just 20.6 mpg on my test loop and that this car makes its maximum power and torque using pricey 93-octane fuel. Believe it or not, that result exceeds the EPA rating of 20 mpg in combined driving. But at the same time, it’s no better than a typical midsize SUV. 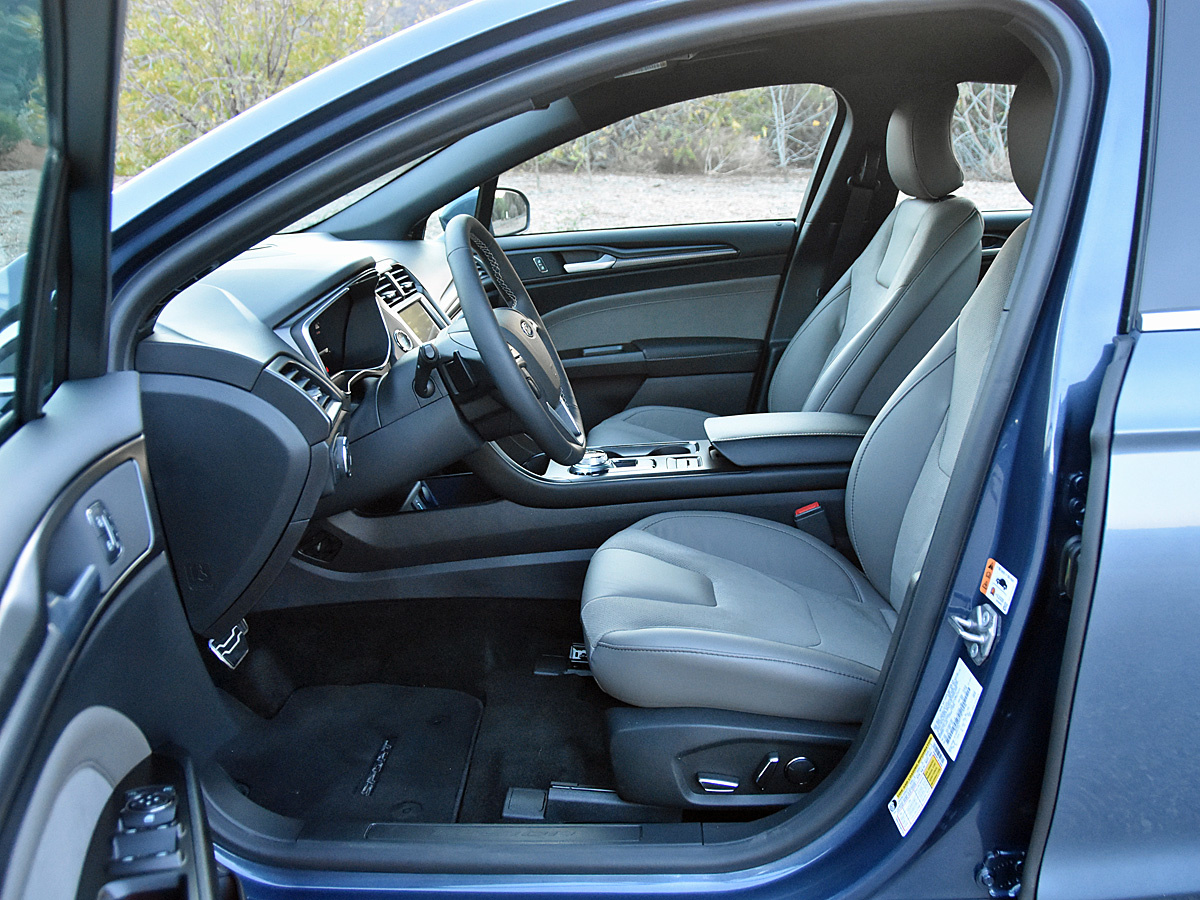 So then, the Fusion's driving fun comes at something of a cost, but it is not extracted from the comfort department.

Ford provides proper seats for the task at hand. Equipped with sport bolstering and manufactured suede inserts, the 10-way power adjustable driver’s seat has no problem holding you in place while exploring the outer limits of tire adhesion.

The backseat is snug for a midsize sedan, but Ford uses softly padded front seatback material to help cushion the potential blow to knees. My test car also had rear air vents, as well as rear 12-volt and 110-volt power outlets.

Trunk space is generous, measuring 16 cubic feet. The Fusion lacks a handle or slot for closing the trunk lid, though, so prepare to get your hands or gloves dirty. Also, keep in mind that if you get a Fusion Hybrid or Fusion Energi, the battery components cut into trunk space, reducing it by nearly half for the plug-in version. 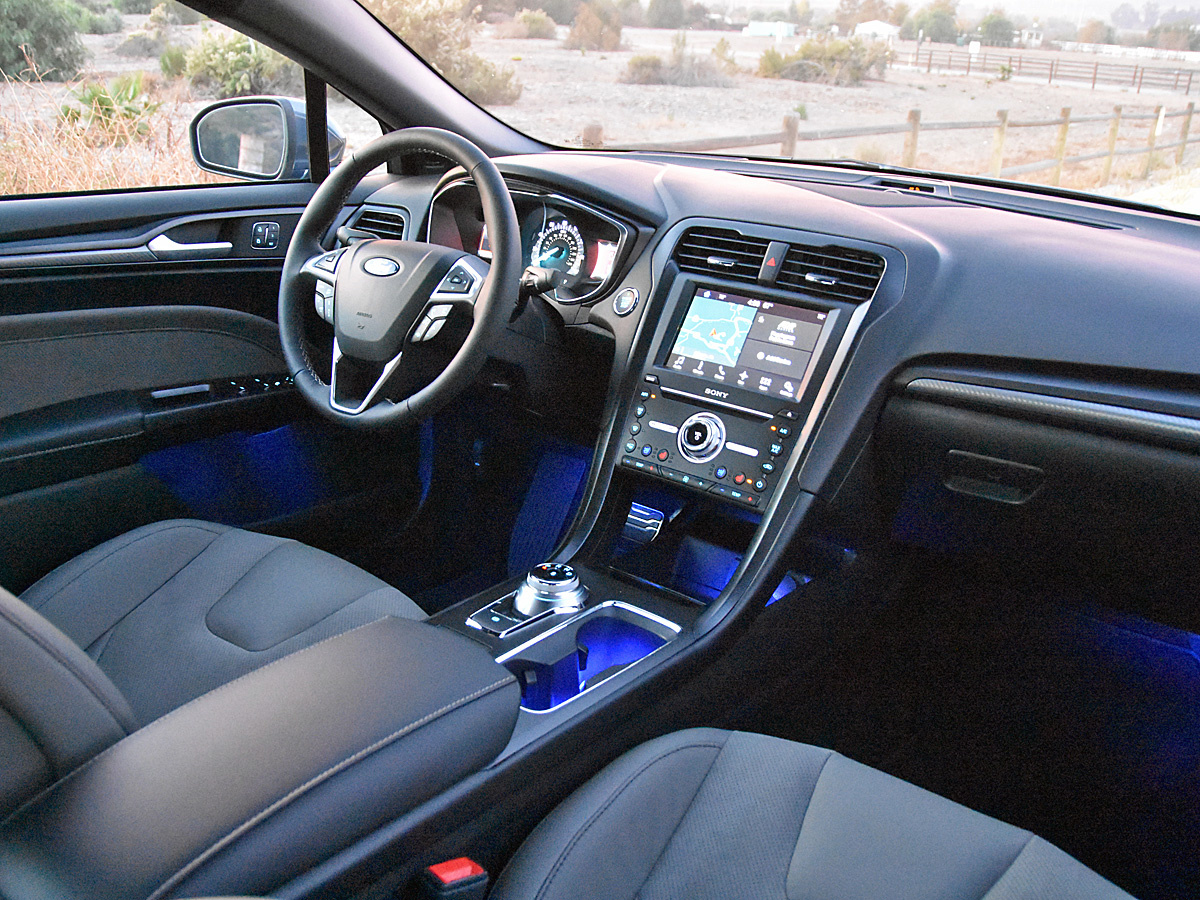 In order to keep the Fusion Sport’s base price within the realm of reasonable, the optional equipment list is a long one, and it includes Sync 3, Ford’s latest infotainment system.

Years ago, the Fusion came with an inferior technology called MyFord Touch, and it was combined with a seriously aggravating, touch-sensing control panel. Today, Sync 3 is vastly superior to Ford’s old technology, and traditional knobs and buttons have replaced the previous touch-sensitive panel. As a result, and despite the car’s age, a 2018 Fusion is far more satisfying to live with than what the company was selling half a decade ago.

The only potentially confusing part of the Fusion’s cabin is the electronic transmission selector. It’s a twist knob, my favorite alternative to a traditional shifter, and you push down in the middle in order to activate Sport mode.

Getting back to Sync 3, it supports Apple CarPlay and Android Auto, Sync Connect service with a FordPass app and a Wi-Fi hotspot, Siri Eyes Free, audible text messaging, and 911 Assist service following a collision. The system recognizes voice commands, can be paired with a Sony premium sound system, and can be upgraded with a navigation system. Sync 3 is quick to load, is responsive to inputs, and features modern graphics. Some of the virtual buttons are on the small side, though, which is especially problematic in combination with the Fusion Sport’s stiffer suspension setting.

In addition to Sync 3, the Fusion includes MyKey, allowing owners to personalize specific vehicle attributes in order to encourage safer teen driving habits. It is accessed via the dual-screen driver information system, which also allows for a wide range of customization in terms of vehicle settings and how information is displayed.

This car is also available with an active parking assist system that will steer it into parallel and perpendicular spaces while the driver operates the pedals and transmission. I’ve used these in the past, and don’t find them to be terribly helpful. In my opinion, if you can’t quickly get your car into a space without this technology, you are an excellent candidate for public transportation. 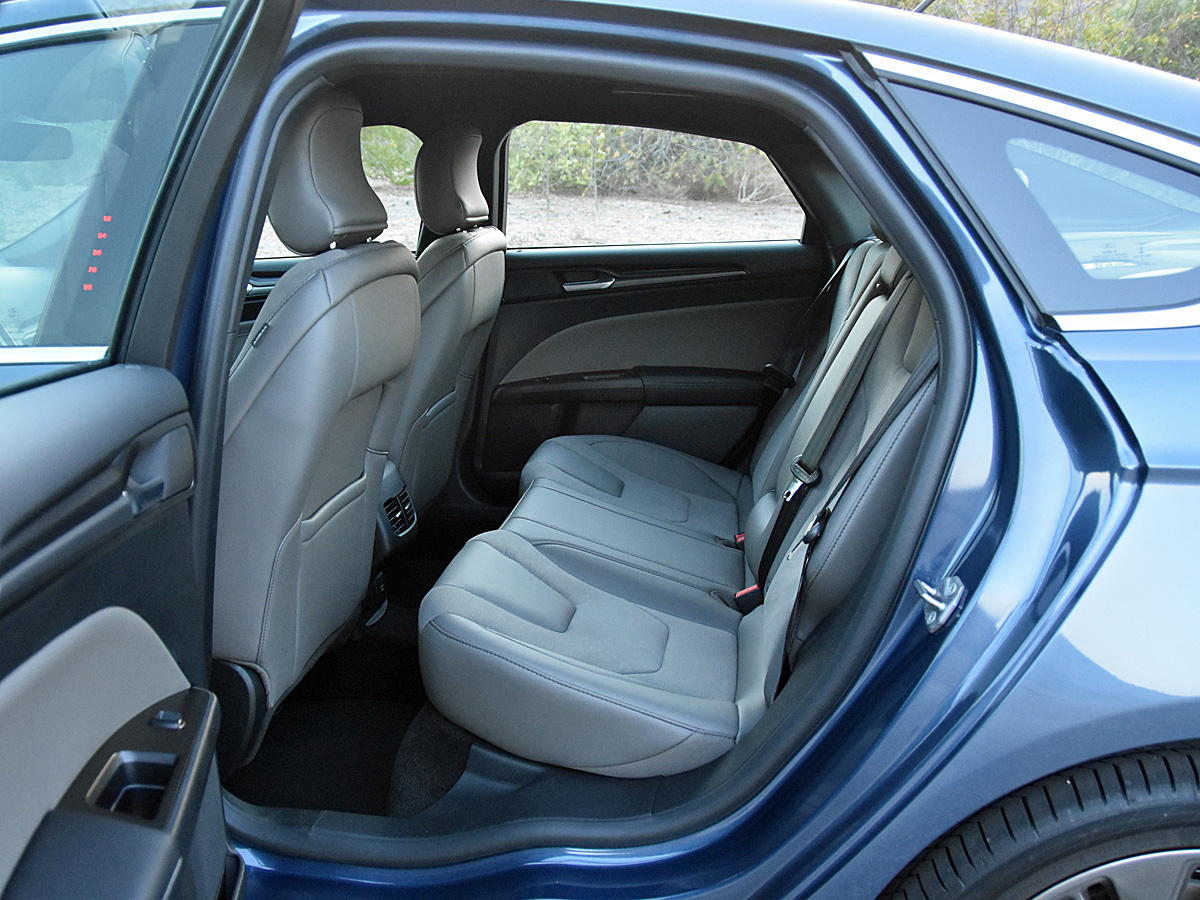 Ford offers the usual laundry list of safety, driver-assistance, and collision-avoidance features for the 2018 Fusion. A notable exception would be the car’s optional inflatable rear seat belts, which are designed to add extra cushioning in the event of a collision. They’re a rarity no matter how much money you’re spending on a new car.

As far as crash-test results are concerned, the 2018 Fusion performs beautifully in all Insurance Institute for Highway Safety (IIHS) assessments, including the new front passenger’s side small overlap frontal impact test. The IIHS does, however, think that the Fusion needs better headlights and more easily accessible child safety seat anchors.

This impressive performance makes the mediocre 3-star crash protection rating for the front passenger, as assigned by the federal government, all the more curious. In other NHTSA tests, the Fusion earns top marks. 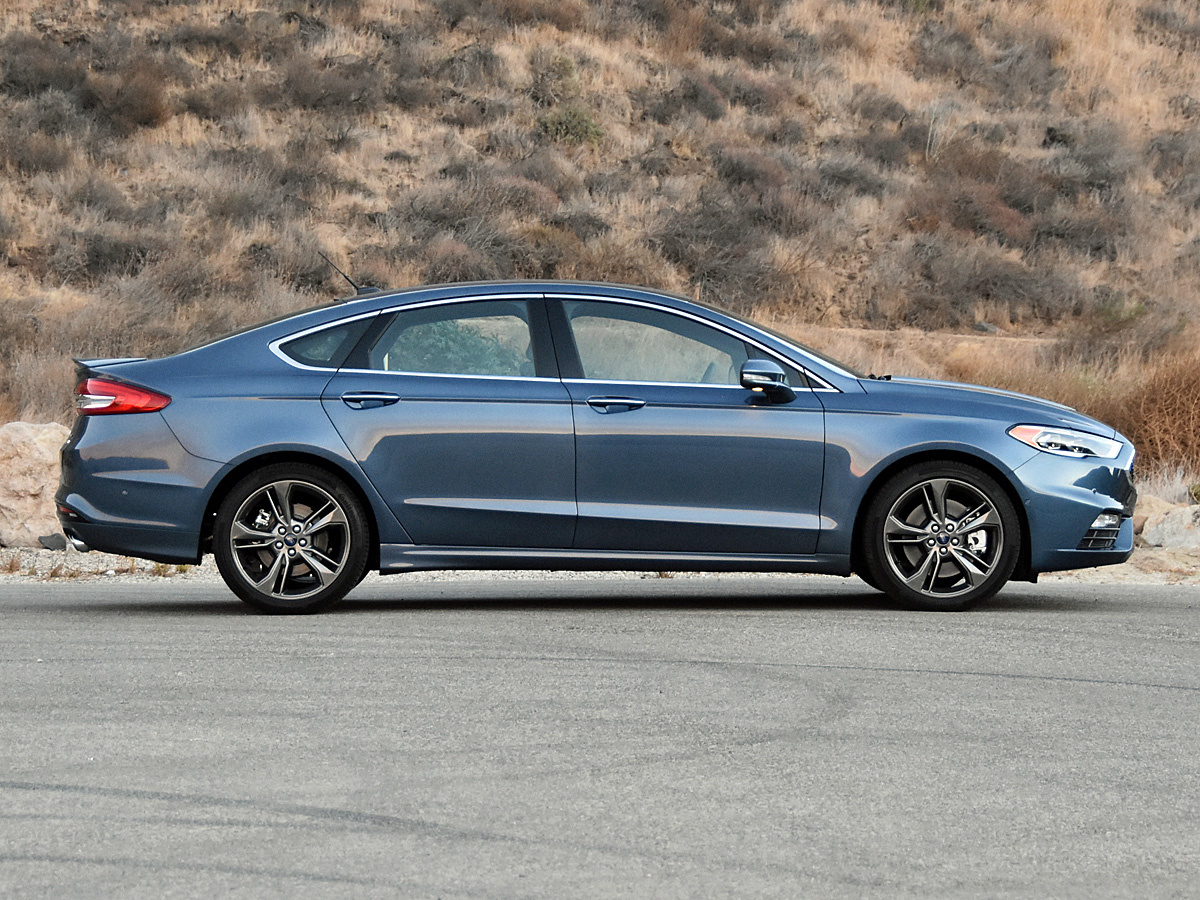 Although a 2018 Fusion can get pretty pricey, the reality is that Ford is almost always offering some kind of a deal on this car, and dealerships are further incentivized to make them financially appealing to family sedan buyers.

For example, as this review is written in December of 2017, Ford is offering a $1,000 rebate plus no-interest financing for 72 months. These incentives and other sweeteners for dealers shave a significant amount of money off the cost of a new Fusion.

Furthermore, you don’t need to get a Fusion Sport in order to buy a midsize Ford sedan that is satisfying to drive. Upgrade to the SE trim level with the optional 240-horsepower turbocharged 2.0-liter engine and AWD, and for little more than $29,000 you’ll have a rewarding, all-weather family car for daily driving.

But, if you enjoy the drive between points A and B just as much as your arrival at a destination, the Fusion Sport demands consideration, if for no other reason than its status as the most powerful and thrilling choice among midsize sedans.

TheHorror Come on, Ford. Enough with the Aston Martin grille. No one is mistaking this overweight rental car as a Rapide.

cadsux Ford owned Aston Martin from 1987 to 2010. That grille originally ended with the DB6 in 1971. Ford brought it back in 1994 with the DB7. Without Ford, Aston Martin would have been bankrupt long ago, and we would not be enjoying Aston Martin today.

Truedub Whose to complain against a "Aston Martin" grille? Especially on a sedan, lol, a lot of people enjoy it, me being one of them.

Users ranked 2018 Ford Fusion against other cars which they drove/owned. Each ranking was based on 9 categories. Here is the summary of top rankings.

Have you driven a 2018 Ford Fusion?
Rank This Car

Display Screen/ Radio Will Not Turn On

What would cause this to happen and how do I get it fixed?

My brand new 2018 Ford Fusion Energi has a roof leak. Water is coming in around the control panel between the sun visors but the dealership can't find where it is leaking. They have had the car 3 ti...

What Is The Correct Tire Size For My Car?

I have a 2018 Ford Fusion with 6,500 miles and I had the wrench light came on with a message saying see manual... I'm worried to drive it not knowing what's wrong with it, I barely got this car abo...