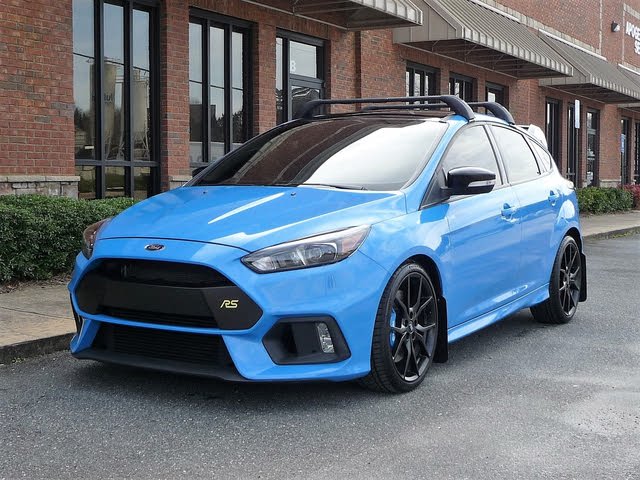 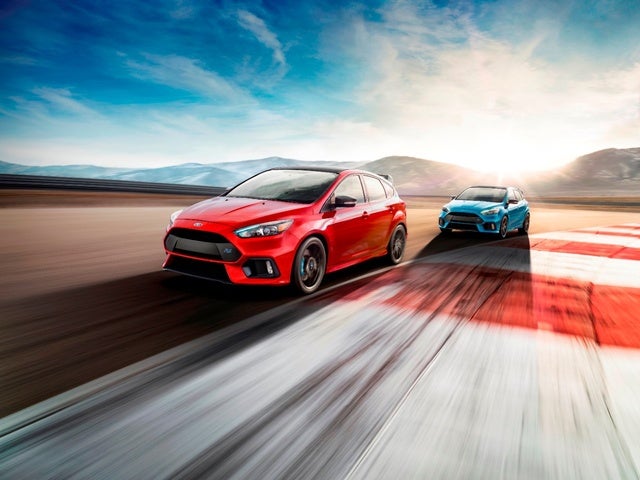 Introduced as Ford’s answer to compact global cars, the Focus hit the market in the late 90s to critical acclaim. The Focus remained largely unchanged until the third-generation release in 2013. This included the debut of the performance-centered Focus ST, forging a path for the 2016 Focus RS. Critics considered the first Focus RS an exciting addition to world-class performance cars.The 2018 Focus RS receives some minor adjustments, but largely remains unchanged from the prior year..

The Focus RS is available solely as a five-door hatchback,and it’s a difficult car to miss. The front fascia is dominated by smoke-effect headlights, menacing matte-black inserts for the upper grille and brake ducts, and a massive intercooler sitting just behind the lower grille. Painted black forged alloy wheels flank blue brake calipers. Around the back, there’s a giant RS-badged spoiler and fat twin exhaust tips that provide the only brightwork on the car’s exterior. It’s a cohesive look that makes a statement.

The Focus RS’s power comes courtesy of a turbocharged 2.3-liter inline-4 cylinder making some 350-horsepower and 350-pound-feet of torque. The only transmission choice, a short-geared 6-speed manual, connects to all four wheels. Up to 70 percent of the torque produced by the Focus RS can be applied to the rear axle. The rear axle features a limited-slip differential and twin electronic clutch packs that cooperate to control the torque to either wheel (up to 100 percent) for a trick torque-vectoring effect. On the front axle, there is an open differential, and each wheel can brake individually for similar torque-vectoring functionality. The Focus RS may share an interior and body-shell with the standard model, but it is an entirely different beast.

Critics are fond of the driving dynamics provided by the Focus RS. With the standard launch-control system, the RS can go from 0 to 60 miles per hour in 4.7 seconds, ranking highest in the segment for manual transmission cars. The Focus RS is a willing partner in fun and tomfoolery, especially aurally. Deliberate presses of the throttle are met with turbo chirps and exhaust growls. Steering is precise and quick, but firm. The Focus RS comes with four driving modes, including Ford’s first drift mode. Each mode reconfigures the stability control, throttle response, and engine mapping. The standard Brembo brakes are well-suited to track duty with firm response and no fade after hours on the track. While reviewers praised the spacing of the clutch and accelerator pedals, they did subtract points for the stiff ride in every suspension setting.

The hatchback on the Focus RS was chosen to compete in the hot hatch segment, not to make its interior practical. The Focus RS, a segment veteran, has been left behind in terms of space optimization and passenger comfort. The heavily-bolstered front Recaro seats are solid, so much so they may be uncomfortable for larger occupants. The thick, deeply-cupped front bucket seats mean further reduced rear legroom. Front- and rear-seat comfort and cargo space are outmatched by competition. The 2016 facelift addressed some outdated elements with a three-spoke steering wheel and revised temperature control panel, but the Focus RS retains interior components from the standard Focus. Performance-specific accents like contrast blue stitching and driver-focused instrument panel with oil temperature, turbocharger pressure, and oil pressure gauges slightly hide the cabin’s age. Despite newer, more luxurious features from the competition, the Focus RS cabin does little to detract from the overall experience.

Unlike other Focus units, the Focus RS is imported from Ford’s German factory. Ford offsets the import cost by limiting options. The 2018 RS comes in one well-equipped version that starts at $41,120, with few à la carte options. Standard on every unit are fog lights, xenon headlights, leather upholstery, dual-zone automatic climate control, heated front seats, a heated steering wheel, an 8-inch touch-screen infotainment system with navigation, XM Radio, and heated side mirrors. As far as color choices, two are available, Race Red or Nitrous--a signature blue that adds an extra $695. For sunny days, a power sunroof adds $895 and uprated summer tires cost $550. Buyers in northern climates may want to spec the $1,995 Winter Tire & Wheel Package, which comes with less-glamorous alloy wheels and winter tires for the snowy season.

Overall, the 2018 Ford Focus RS is an impressive machine. It is exactly the sort of European track dream North Americans have drooled over. Priced slightly above competition, the Focus RS delivers an approximate 50-hp advantage. Other carmakers may be more refined or spacious, but no one else offers the raucous, lovable character of the Focus RS. With its 2018 model, Ford retains the segment championship, supplying the ultimate street-legal rally car.

Users ranked 2018 Ford Focus RS against other cars which they drove/owned. Each ranking was based on 9 categories. Here is the summary of top rankings.

Have you driven a 2018 Ford Focus RS?
Rank This Car