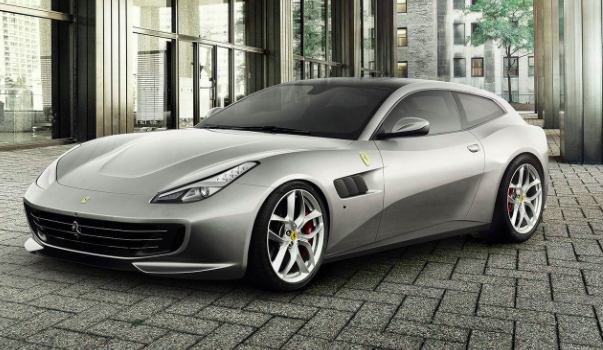 As almost every other high-end or performance car manufacturer has introduced an SUV into their lineup, Ferrari remains one of the last holdouts, and the closest thing to an SUV with a Prancing Horse badge so far has been their four-seat hatchback. Initially dubbed the FF, which was technically marvelous but a bit of an odd duck, Ferrari updated the model in 2016 with better styling, renaming it the GTC4Lusso, and the carmaker has released a new version of the Ferrari hatchback that further broadens the car’s appeal for 2018. Though these cars had previously employed Ferrari’s traditional large V-12 engine and a novel all-wheel drive system, the all new GTC4Lusso “T” model has a smaller twin-turbo V-8 and rear-wheel drive. It’s lighter and cheaper than the standard Ferrari, but it still has all the style and nearly all the performance.

Under the car’s long hood, the enormous, naturally aspirated V-12 found across the Ferrari range is replaced with the 3.9-liter twin-turbo V-8 out of Ferrari’s upcoming Portofino model, which is set to replace the California, and it generates 602 horsepower and 561 lb-ft of torque. While horsepower is nearly 80 less than the V-12 model, the torque figure remains the same, and very little performance is lost in the engine swap. The V-8 model hits 60 mph in just 3.5 seconds, merely a tenth of a second after the V-12. Top speed, meanwhile, stands at 199 mph against 208 in the V-12, and few owners of either car will ever come anywhere near that. The familiar 7-speed paddle-shifted dual-clutch automatic transmission shifts the vehicle, and power only goes to the rear wheels. The V-8 model reportedly has a more muted exhaust note compared to the raspy scream of the V-12, but putting the car in Sport mode opens a flap in the exhaust. While the GTC4Lusso T comes standard with stop/start ignition and offers improved gas mileage, a big Ferrari V-12 is easy to beat on the efficiency front, so don’t expect to save at the pump. It is rated at 4 mpg better than the V-12, but that still comes to just 17 mpg total.

Since the GTC4Lusso T ditches all-wheel drive, the new model doesn’t just differ in the powertrain. The smaller engine and more conventional drivetrain translates to over 120 pounds in weight savings, but in a two-ton car that isn’t as drastic as it sounds at first. That said, the weight saving here comes at the front of the car, and Ferrari claims to aim for more of a light and sporty feeling with this car even though it still has the four-wheel steering, magnetorheological dampers, and Side Slip Control of the all-wheel drive version.

The inside of the GTC4Lusso T is much the same as the standard car, maintaining the familiar luxury feel. The large central tachometer is flanked by an instrument screen in the usual place along with the manettino drive mode selector. Buyers can choose from about a dozen interior colors, and leather along with carbon and aluminum trim abound. Because the GTC4Lusso is a less overtly sporty model by Ferrari standards, it comes with a massive 10.25-inch infotainment screen in the middle of the dash, and buyers can add an extra screen for the front passenger. This screen measures 8.8 inches and allows the passenger to play with certain features like navigation. Another add-on option is a glass panoramic roof, which stretches all the way back from the windshield to the tail. As for practicality, the rear seats are suitable for adults even if they aren’t massive, and they fold down for what is, by Ferrari standards, a cavernous rear cargo area.

The GTC4Lusso T is perhaps the most well-suited Ferrari for daily driving duties, and with large windows and narrow pillars, outward visibility is quite good, which isn’t something you often hear about high-end performance cars these days. At the same time, however, Ferrari doesn’t include the kind of high-tech or active safety features that you find even in most basic economy cars. The GTC4Lusso T thus offers a visually identical car to the standard one that costs 40 grand less, uses less fuel, and gives you essentially the same performance.

Have you driven a 2018 Ferrari GTC4Lusso T?
Rank This Car