Looking for a Used 6 Series Gran Turismo in your area?

BMW's 2018 6 Series Gran Turismo is a multi-purpose luxury vehicle for the largest purses. 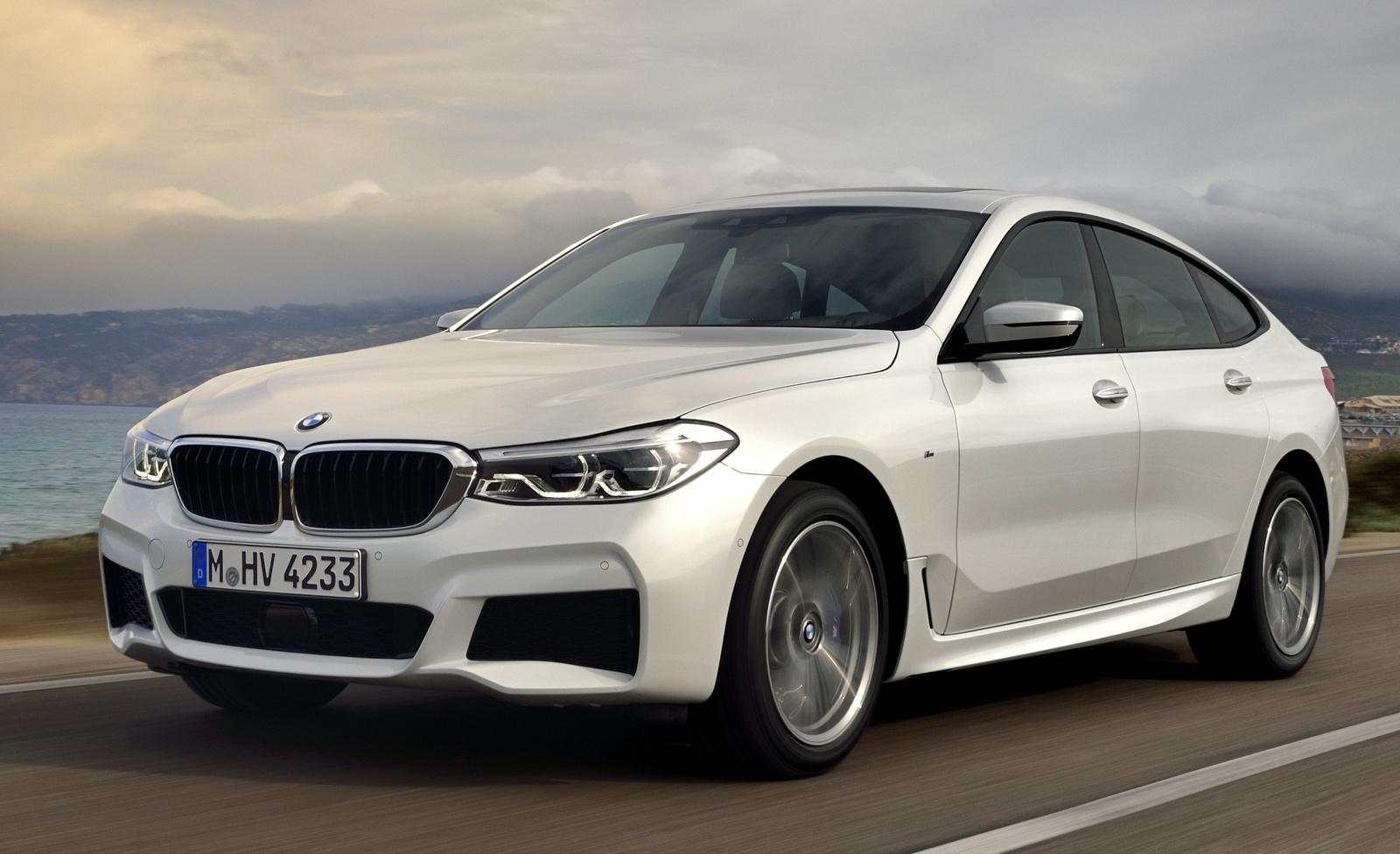 BMW makes so much money it can afford to develop peculiar cars based on its popular cars. The 6 Series Gran Turismo, which replaces the 5 Series Gran Turismo (in production since the 2010 model year), is one of the stranger BMWs. But this car is several cars blended into one large, strangely proportioned body. The styling and high starting price are turn-offs, yet the 6 Series Gran Turismo offers so much versatility, technology, performance, and comfort that we had to test one. Put down your judgments. This BMW is a lot better than it looks. 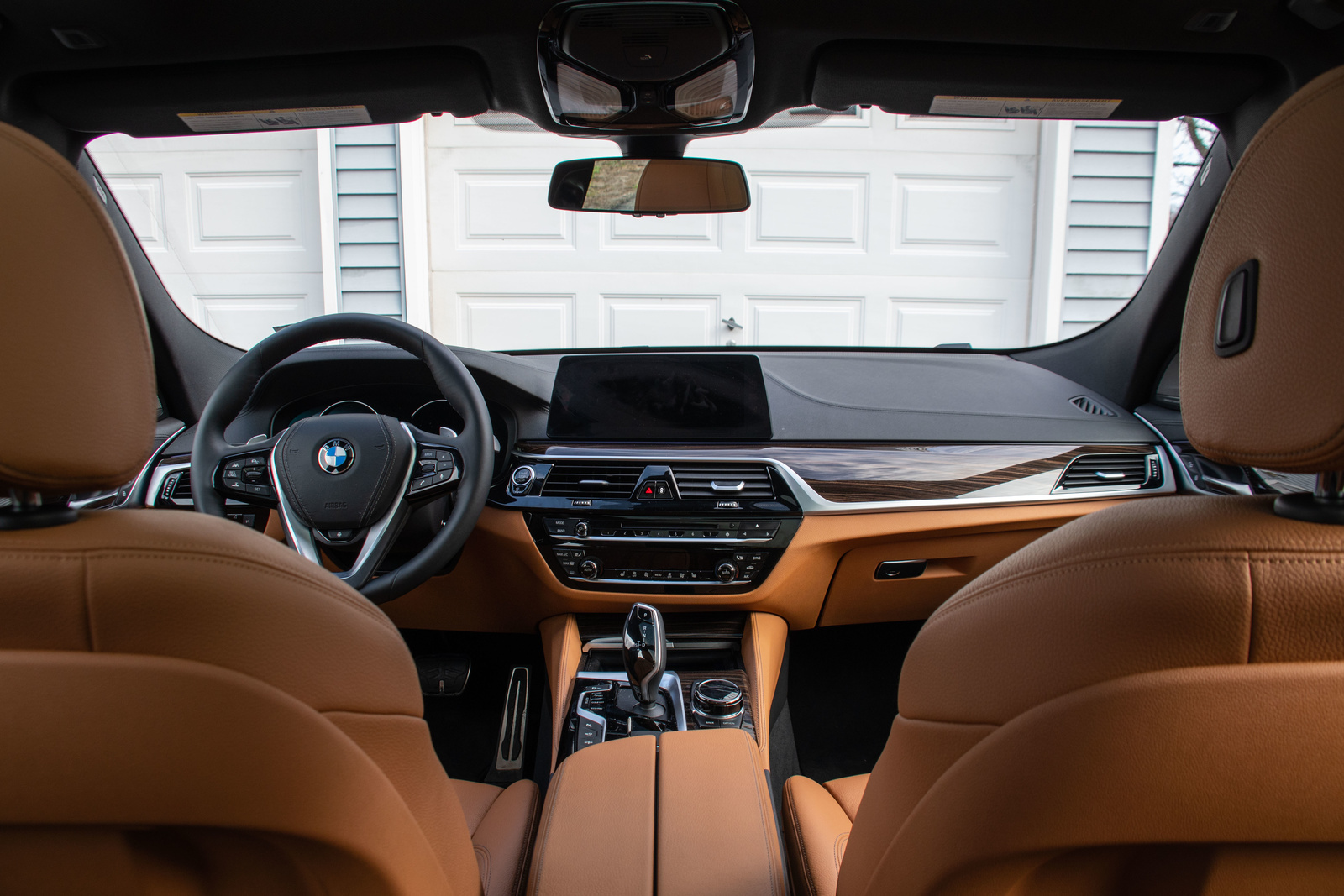 The previous 5 Series GT didn’t make many friends. Car and Driver called it one of the ugliest cars on sale. BMW called it “space-functional.” In all respect to the late David Bowie, we’d call the new 6 Series GT a space oddity. Despite a thorough redesign inside and out, the concept of a sedan-fastback-wagon-SUV looks better on a Powerpoint slide than it does in person. Viewed straight-on, the front is inarguably attractive and classic BMW, with its wide twin-kidney grille, aggressive LED headlights, and sculpted lower air intakes. The 19-inch wheels on our test car, part of the M Sport package ($1,200), along with the upper decklid’s retractable spoiler and flowing LED taillights, win points. So do the frameless windows and their shiny black surrounding trim. Yet in profile, the 6 Series GT is an awkward thing—tall, puffy, and struggling to appear sporty as its name suggests. The 5 Series GT was even puffier and weirder with its split rear tailgate. If cars could talk, you’d hear the 6 Series GT arguing with itself.

BMW redeems itself inside, where an impeccable attention to quality and detail pervades every surface. The tan leather, contrast stitching, and wood trim feel rich. The dash is lifted straight from the 5 Series sedan, whereas the rest of the cabin feels as cosseting as a 7 Series. It’s remarkably simple and clean, as most high-end products are. Sitting beneath the standard panoramic moonroof and arched roofline reminded us of a geodesic dome, one of those glass-enclosed structures you see in modern architecture or sci-fi films. It’s very airy and spacious. The rear seats have suede-covered pillows on their headrests, while ambient lighting glows from the front seatbacks. But a first-class interior can’t fully compensate for such a challenged exterior. The 6 Series Gran Coupe---a true sedan---or the two-door 6 Series coupe and convertible are the gorgeous cars. 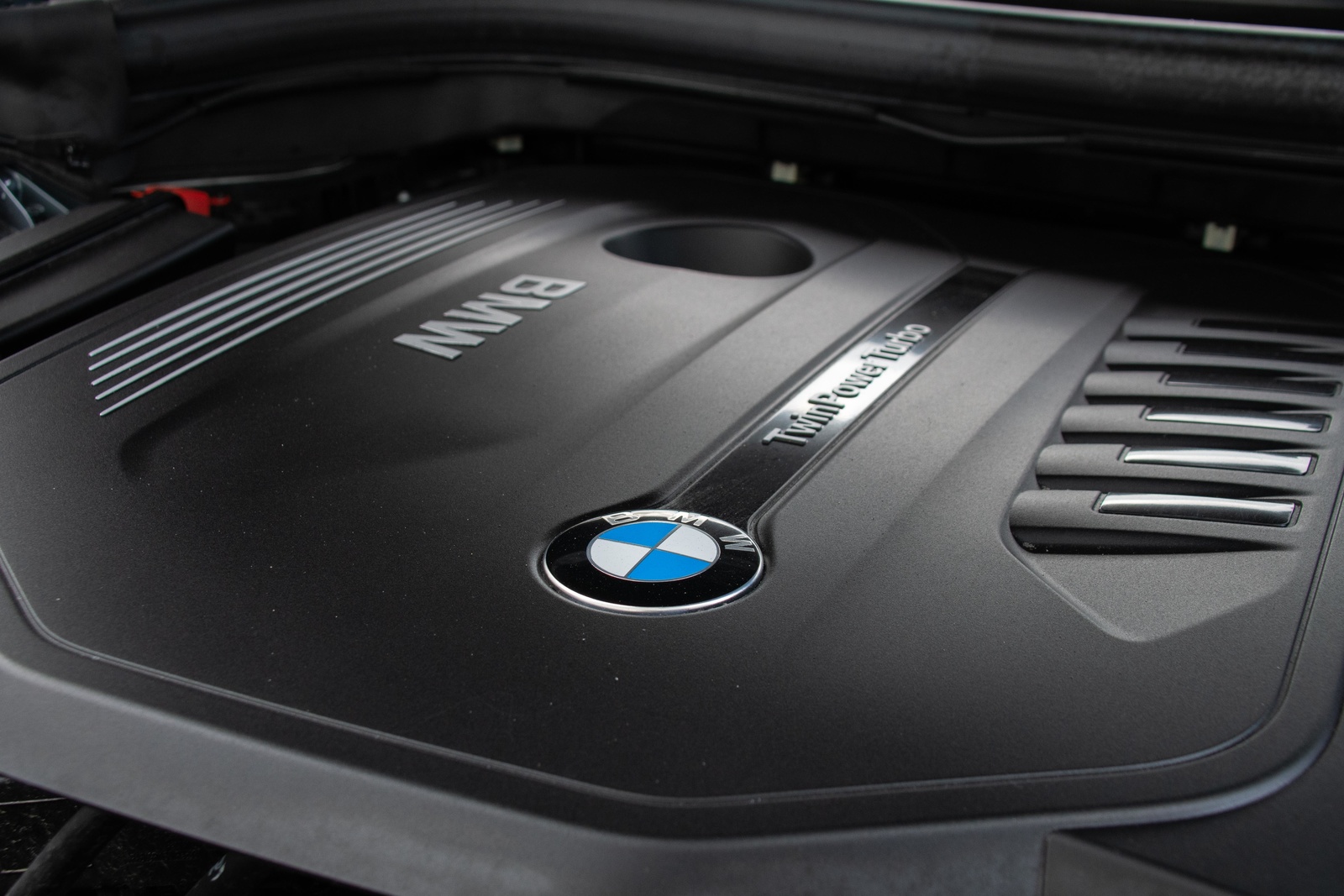 BMW offers one trim, the 640i xDrive Gran Turismo, instead of the previous car’s three. Rear-wheel drive (RWD) and an optional V8 are no longer available. In their place is an updated version of BMW’s 3.0-liter turbocharged inline 6-cylinder with 335 horsepower and 332 pound-feet of torque. An 8-speed automatic and all-wheel drive (AWD) transfer this engine’s considerable grunt to the pavement. There’s no fault to be found. The inline six and the transmission are smooth like whipped cream cheese. But you’ll want to put down your bagel before pressing the gas—this car launches hard and snarls while doing it. In Sport mode, the 6 Series GT belies its heavy, wide self with flat cornering, loads of grip from summer Pirelli P Zero tires, and powerful brakes.

Be sure to order the Dynamic Handling package ($4,100), which ensures these accolades are possible. It includes an adaptive air suspension, a retuned variable-ratio steering rack (which reduces how far you’ll need to turn the wheel, effectively quickening response at lower speeds), rear-wheel steering, and Active Roll Stabilization. That last bit is a technical marvel. It splits the antiroll bars in half and splices them together via a hydraulically actuated motor that can vary their torsion at a precise moment. Ordinarily, a car’s antiroll bar is fixed. But this BMW can crank up the twist to counter body roll or decouple the antiroll bar from the wheels for a softer ride. In the Comfort Plus setting, the 6 Series GT rides serenely and undisturbed by broken pavement. When the going gets rougher, a separate button can raise the entire car.

We wish BMW hadn’t dulled the steering feel, which offers virtually no feedback relative to how much grip is available. Yet in most applications, its finger-light effort makes the 6 Series GT a road-trip champ. Fuel economy is EPA-estimated at 23 mpg city, 28 highway. We averaged 20 mpg in mixed driving. 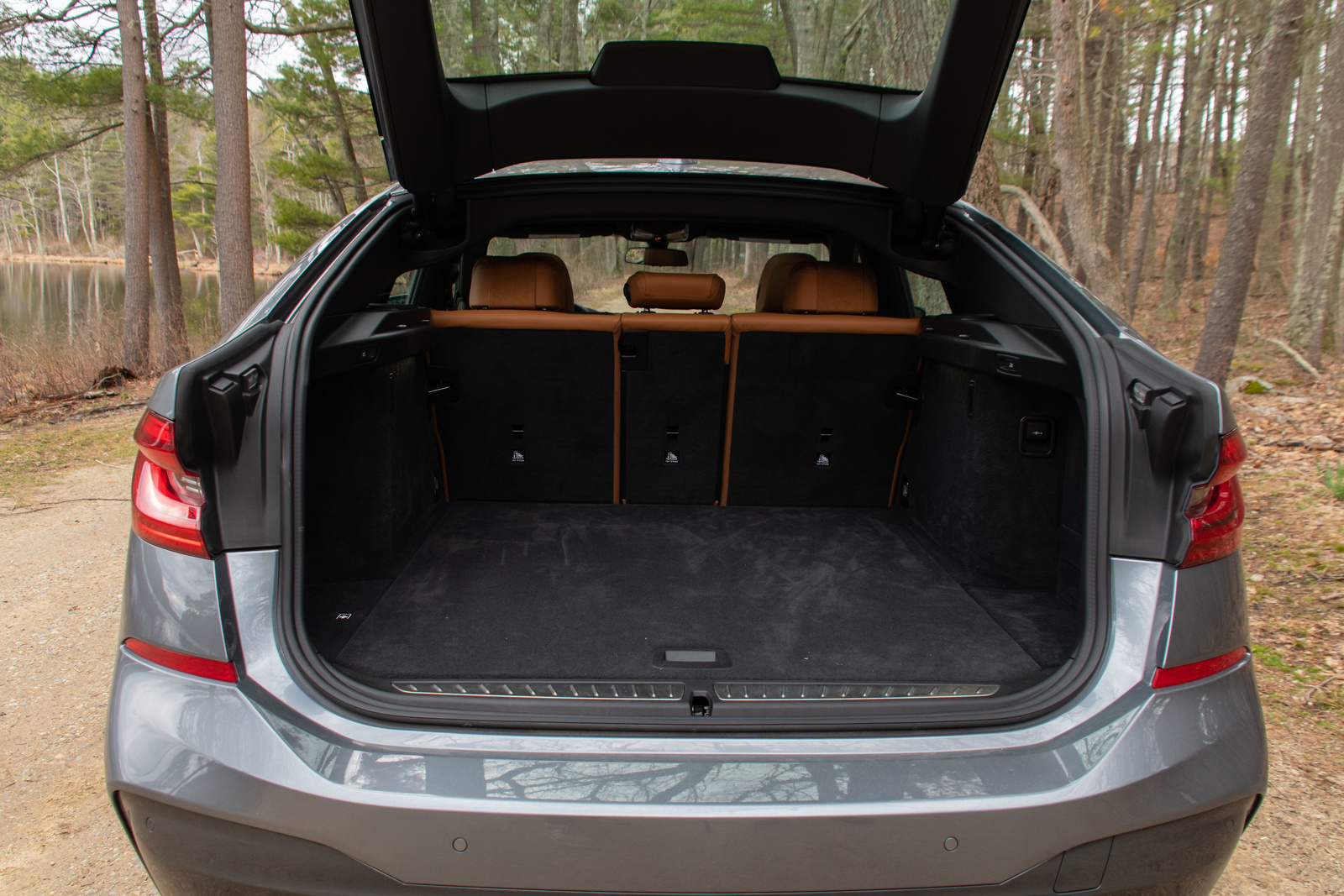 Here’s where the styling pays off. Four big adults can stretch out arms, legs, and necks without crowding, no matter the seat. Visibility is clear in all directions. The cargo hold is humongous. It can swallow 65 cubic feet with the rear seats folded. That’s less than the X5, which isn’t an issue. The tailgate swings open high, its opening is extra-wide, and the car’s ground clearance is low. That makes loading anything a cinch. Elastic straps on either side can hug wine bottles, while tie-down hooks help secure loose items. The cargo covers can be stored underneath the floor (propped open by a hydraulic strut), or you can use this space to hide more stuff. Bulky items pose no problem with this level of open space.

There are drawbacks. The power-reclining rear seats are a $500 option and don’t recline very far. Rear passengers also can’t adjust their own temperature or fan speeds, as tri- or quad-zone climate control is not offered. You’ll need to pay extra for the multi-contour cooled and massaging front seats, which are as decadent as the Luxury Seating package ($2,600) sounds. But the standard 16-way seats are supportive and plush enough. 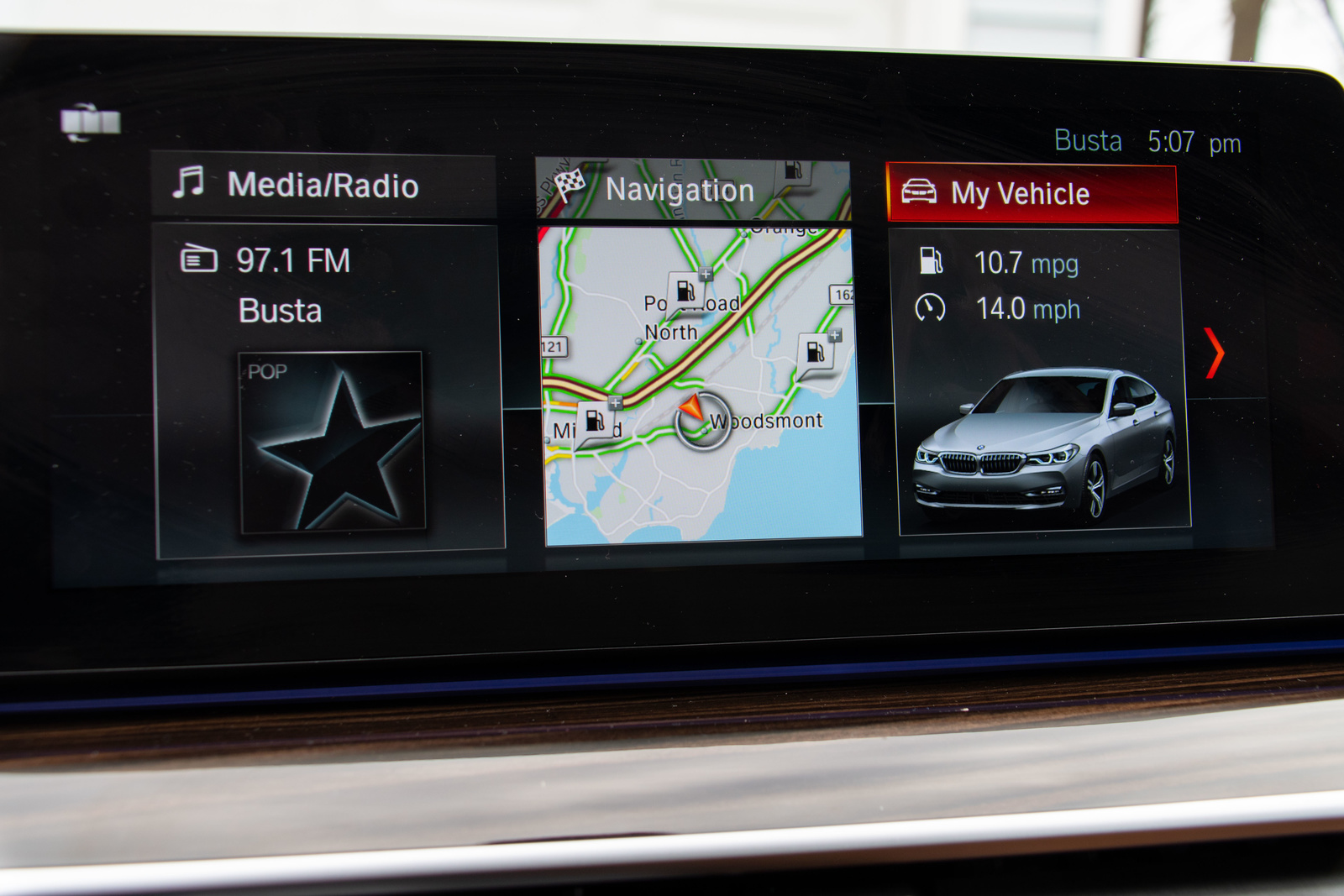 We've tested many new 2017 and 2018 models, and BMW may have the best technology in the luxury class. Gesture Control, which can sense certain hand motions to control phone calls and the car’s parking cameras, is the only gimmick that doesn’t function well. Everything else is there for a purpose and expertly integrated into the car, so it feels intuitive, not overwhelming. The iDrive 6.0 infotainment system can be controlled with BMW’s traditional rotary dial, touchpad, and hard buttons, or via tapping, swiping, or pinching on its 10.2-inch screen. Adjusting vehicle settings will bring animations of the actual setting you’re adjusting. The head-up display has the clearest, most detailed graphics anywhere. It can show the specific intersection you’re approaching instead of a generic lane marking. When it’s off, those graphics seamlessly take over the tachometer’s space within the digital instrument cluster or can list radio stations and songs, all easily controlled by a thumb wheel. Hover your fingertips over the radio presets and the system identifies all of them with a handy overlay at the top of the main screen (and they don’t have to be radio stations—navigation entries or phone contacts can be saved). Voice recognition works just like in TV commercials that falsely show Apple's Siri or Amazon's Alexa reacting instantly and perfectly. In the 6 Series GT, it really does. Speak the name of a point of interest (POI), and it’ll run an online search and start navigating within seconds. Apple CarPlay ($300) and Amazon Alexa support are available.

Then there’s the BMW Connected app, which can remotely start the car via a smartwatch. It can send directions to the car via your phone’s native maps app. Or you can activate the 360-degree cameras and view your car’s surroundings from every angle, in a freakily accurate 3D rendering. Has someone parked next to you? Is a tow truck coming? It takes all of 30 seconds to get an updated image on your device, which rotates and zooms. You can do that within the car, too. No other camera system is as precise or useful. Another feature lets you park the car while standing outside, although we didn’t have the special Display Key (a large key fob with a built-in touchscreen) to test it. Then there’s Traffic Jam Assistance, which allows up to 50 seconds of hands-free driving while the car steers, brakes, and accelerates at low speeds. This is part of the Driving Assistance Plus package ($1,700), and while this is a competent semi-autonomous system on the highway, you should never, ever take your hands completely off the wheel while driving.

Mercedes-Benz has a more complex array of controls and screens. Audi has a better digital instrument cluster but a less intuitive infotainment system. BMW has nailed this category. 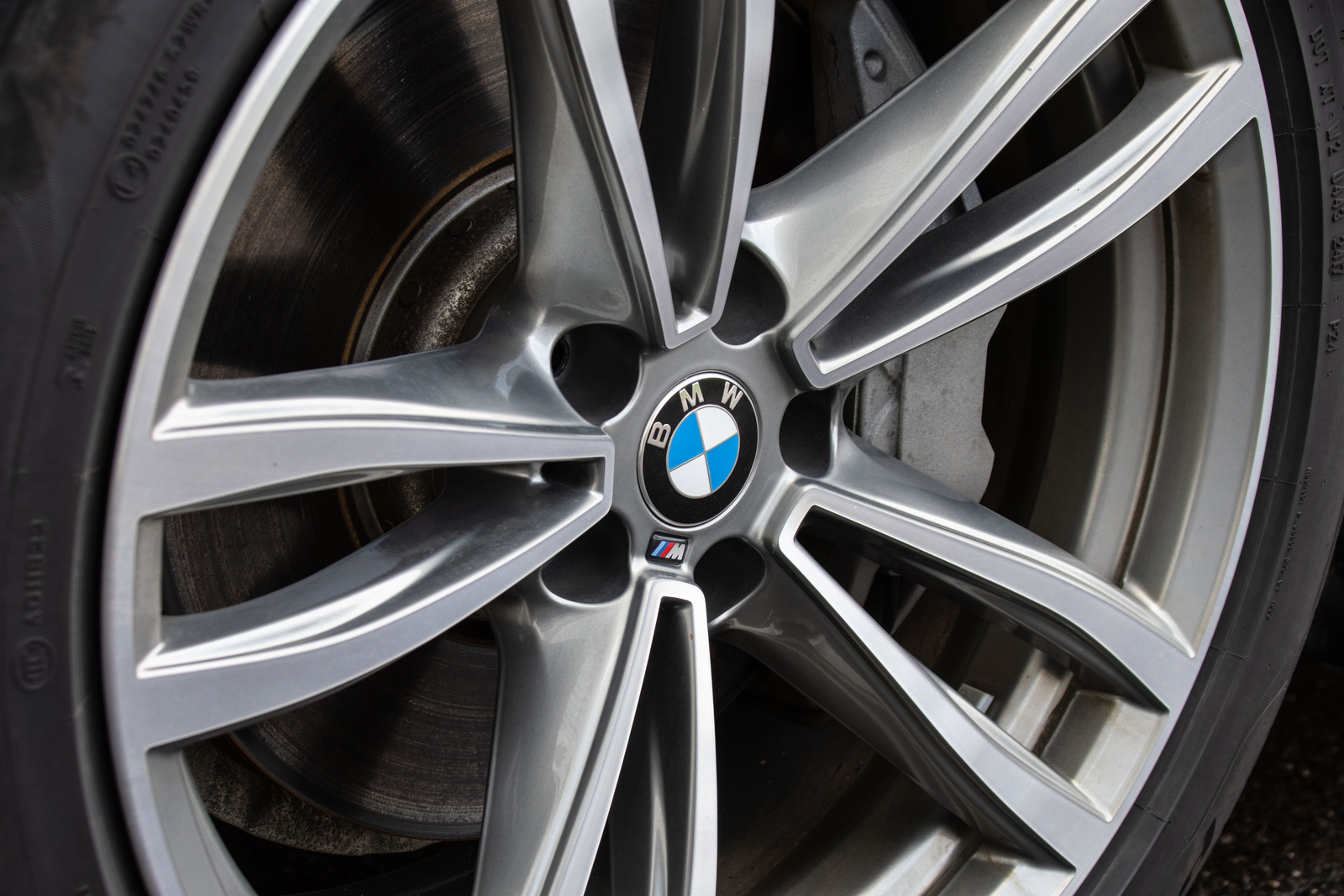 The 6 Series GT has not been rated by the National Highway Traffic Safety Administration (NHTSA) or the Insurance Institute for Highway Safety (IIHS), but we have faith in this car’s high-strength body. Forward-collision alert, auto-braking with pedestrian detection, lane-departure warning, blind-spot monitoring, and rear cross-traffic alert come standard. Lane-keep assist is part of the aforementioned Driving Assistance Plus package. If the 6 Series GT senses an imminent collision, it can close the windows and moonroof and pretension the seatbelts. After a crash, it applies the brakes to prevent further rolling and disconnects the fuel pump and battery, unlocks the doors, and turns on the hazard and interior lights. The brakes get automatically dried in the rain and include an anti-fade function. 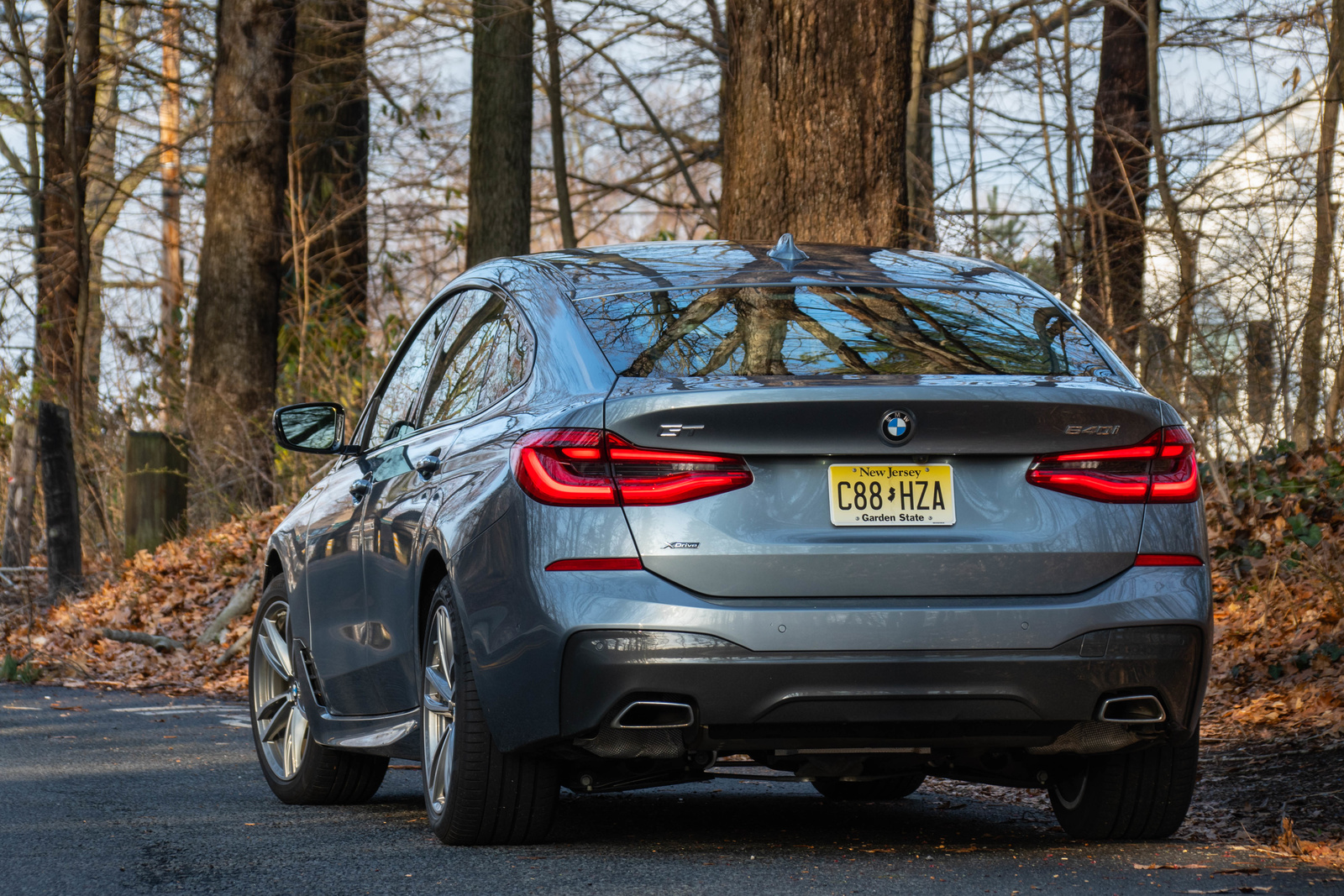 The 6 Series GT starts at $70,200 and comes standard with navigation, many safety aids, Wi-Fi, LED headlights, and a 3-year/36,000-mile maintenance program that includes brake fluid and spark plugs. Even a garage door opener and lumbar support come standard, which is a big deal for a BMW. But like all other BMWs, many of its nicest luxuries are optional. Our car stickered for $84,510, including the Executive package ($2,150), which brings soft-close doors, Gesture Control, 360-degree cameras, a head-up display, and automatic parking. This is serious money that’ll buy faster, prettier luxury cars than the 6 Series GT. But if you need a car with multiple personalities under one roof, the 6 Series GT delivers at a premium price.

Guru9W5M2X We generally get what we pay for and BMW delivers value. I disagree with the silly design criticisms - the earlier GT looked like a beached whale; the 2017/18 body redesign turned the 640GT into an attractive 5 door sedan. Sadly - US fixation with SUV platforms mean the GT availability is very limited. A7 is the only remaining car in class suitably for hauling around a bike without a rack or a big dog, for example.

Have you driven a 2018 BMW 6 Series Gran Turismo?
Rank This Car

Looking for a Used 6 Series Gran Turismo in your area?

LET ME KNOW WHEN ONE COMES AVAILABLE, VERY INTEREST.. WHAT YOU COME UP WITH