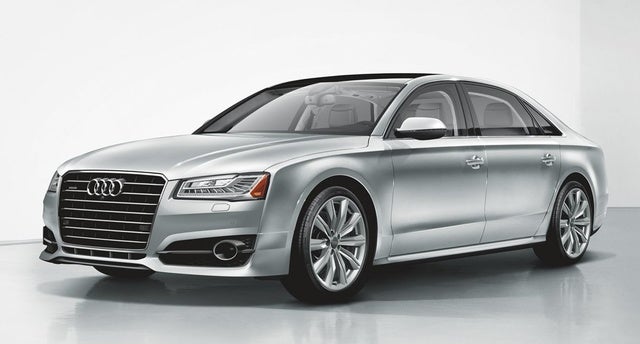 The 2018 Audi A8 will mark the last hurrah of this current-generation model. Sometime next year, Audi will launch an all-new A8 that will bring forth numerous changes such as self-driving technologies and a mild-hybrid system coming standard on all powertrains. But that doesn’t mean Audi won’t give the current A8 a quiet goodbye. The company is making some small changes to its flagship sedan before the new model takes its first curtain call.

The A8 has been with us since the 2011 model year, and Audi hasn’t made many changes to the exterior. Depending on who you ask, the A8 can be described as elegant or somewhat boring. The front features a large grille and a set of LED headlights. Along the side is a character line that runs the length of the vehicle and various wheel options ranging from 19 to 20 inches help give the A8 some presence on the road. An optional Black Optics package that brings blacked-out trim and 20-inch wheels can now be ordered with 21-inch wheels. One item to be aware of with the 2018 A8 is that it comes only with the long wheelbase. If you want a short-wheelbase model, you’ll need to go with the high-performance S8.

Going long-wheelbase only gives the A8 a leg up on competitors when it comes to the backseat. The A8 offers ample legroom for passengers to stretch out, and headroom is quite good for even tall passengers. Passengers will find more than enough room along with 14-way power seats to find that perfect position. The base 3.0T can be equipped with an Executive Package that adds ventilated and massaging front seats, heated rear seats, and a panoramic sunroof. The 4.0T gets the option of the Executive Plus package that brings ventilated and massaging rear seats, and the ability to adjust the front passenger seat from the back seat.

Despite being one of the older flagship sedans on sale today, the A8 can still give newer models a run for their money in terms of design and materials. Unlike most Audis that have austere interiors, the A8 is very opulent with real wood inlays, leather covering a fair amount of surfaces, and a modern design that helps the A8 stand out. The only area in which the model shows its age is its infotainment system. At one time, the A8’s MMI system was considered one of the best, due to its simple interface and a logical control layout. But time has not been kind to MMI, as it trails competitors by not having a large and vibrant screen and also lacks features you would expect, such as Android Auto and Apple CarPlay compatibility. At least the A8 does come with 4G LTE with Wi-Fi connectivity as standard.

Two engines are available for the A8. The base 3.0T is a supercharged 3.0-liter V6 with 333 horsepower and 325 pound-feet of torque. The 4.0T comes with a turbocharged 4.0-liter V8 with 450 horsepower and 444 pound-feet of torque. Both engines come paired with an 8-speed automatic and quattro all-wheel drive. While most reviewers love the V8 for the immediate thrust it offers, they agree the 3.0T offers more than enough power for most drivers. EPA fuel-economy estimates stand at 19 mpg city, 29 highway, 22 combined for the 3.0T and 18/29/22 for the 4.0T.

The A8 shines in terms of handling. Despite its large dimensions and a curb weight ranging from 4,465 to 4,673 pounds, the A8 is quite agile around the corners. Some of this can be attributed to a standard air suspension that can be adjusted to minimize body roll. Steering is precise and intuitive when the vehicle is pushed through a corner. What’s more, the A8 still provides the glass-smooth ride that is expected of a flagship luxury sedan. The air suspension smooths out bumps and other road imperfections with ease.

All A8s come equipped with a full complement of airbags, antilock brakes, traction and stability control, a backup camera, and Audi pre sense, which pre-tensions the seatbelts and closes the sunroof and windows if the system detects an emergency maneuver. Optional safety equipment includes a multi-view camera system; Audi pre sense plus, which alerts the driver of a possible front impact and can intervene with maximum braking; pre sense rear, which closes the windows and pre-tensions the seatbelts if a rear-end impact is imminent; adaptive cruise control with stop and go; lane-keep assist; and automatic high beams. The Insurance Institute for Highway Safety (IIHS) and National Highway Traffic Safety Administration (NHTSA) have not yet crash tested the A8.

GuruWQ4PS Best luxury 4 door sedan I have had the pleasure of driving.

Users ranked 2018 Audi A8 against other cars which they drove/owned. Each ranking was based on 9 categories. Here is the summary of top rankings.