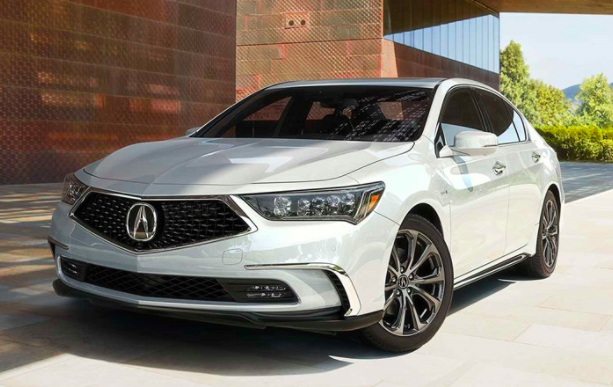 Though the Acura RLX gets little attention from critics and buyers, this flagship sedan has much more to offer than meets the eye. Many consider Acura’s MDX to be superior in terms of desirability, and many customers opt for the middle-ground TLX. The poor RLX thus goes mostly ignored, but for 2018, Acura has refreshed this high-end sedan in hopes that it can turn the model’s fortunes around.

The 2018 RLX joins the MDX and TLX in Acura’s latest school of design, which is inspired by the Acura Precision Concept. This redesign has eliminated the controversial shield grille and replaced it with a sharper, blacked-out hexagonal grille that features the stylized-A logo front and center with geometric mesh that radiates out from that point. The new grille is flanked by new inset-jeweled LED headlights. The lower front fascia features two up-turned, L-shaped chrome air intakes ahead of the front wheels. The wide, black grille subtly integrates the vehicle’s fog-lights along with a tasteful black lip frame at the bottom of the front bumper. The revised tail-end echoes the RLX’s new front by adding LED lights meant to evoke distorted rays of light and the same L-shaped motifs. Like other new Acura models, the new RLX features large exhaust tips as the brand moves away from its initial desire to conceal them. Overall, the RLX’s new digs are distinctive - if not traditionally handsome. Other pseudo-luxury sedans like the Lincoln Continental and Volvo S90 look more purposeful, but the RLX scores well against those of the Cadillac XTS and Infiniti Q70L.

Though the redesign majorly changed the look of the vehicle, the RLX offers the same powertrain options as before. The base model has a 3.5-liter V6 engine and 10-speed automatic transmission that produces 310 horsepower and 272 lb-ft of torque. This version is only sold with front-wheel-drive (FWD), but Acura bestows it with the cleverly-named Precision All-Wheel Steer (P-AWS) setup, which allows the car to adjust the toe-in angle of the rear wheels independently of one another and eliminates much of the handling deficit inherit in a powerful FWD car. Fuel economy stands at 20 city, 29 highway, 23 combined MPG, and Acura recommends running the car on premium, 91-octane fuel.

For improved fuel economy, buyers can upgrade to the RLX Sport Hybrid. This model combines the same V6 engine with a 47-horsepower electric motor coupled to a 7-speed transmission. The back features two 36-horsepower electric motors are located at each rear wheel. Acura calculates the Hybrid’s combined output at 377 total horsepower and 347 lb-ft of torque, and its fuel economy ratings register at 28 city, 29 highway, 28 combined MPG. The Sport Hybrid naturally features all-wheel-drive (AWD), but it operates in FWD until it needs to send torque to the rear wheels.

On the 2018 model, Acura has revamped the RLX’s interior with new materials, colors and sport seats. Overall, the interior looks high-quality and well-put together - especially in regard to the perforated leather seats and glossy wood trim. Additionally, the driver and passenger get 12-way power seats with four-way lumbar adjustments, and all models come with seat heating. Buyers can even choose an optional cooling function, and they can also select from two sets of 14-speaker audio systems.

The center console features Acura’s push-button transmission selector, which separates each drive-mode button by shape and feel. Furthermore, a new feature called Traffic Jam Assist essentially allows the car to drive itself in low-speed heavy traffic, but drivers will need to move the wheel every 12 seconds to prove they are paying attention. Unfortunately, the awkward dual-screen infotainment setup remains unchanged and lacks CarPlay and Android Auto, which are featured on less expensive models. In the realm of space, the front seats are commodious and comfortable, but in the back, the RLX’s second-shortest wheelbase in its class becomes apparent due to its lack of rear legroom.

Acura does have its eye on safety with the RLX, which has seven airbags throughout the cabin, including driver and passenger front and side-seat airbags, a driver knee airbag, and curtain airbags for both rows. The AcuraWatch safety suite is standard on both trims and features front collision warning/mitigation, lane-keeping assist, and adaptive cruise control. The Insurance Institute for Highway Safety (IIHS) tested the RLX as recently as 2017, and it received top scores in all categories, including front crash prevention. The IIHS thus chose the RLX as one of its Top Safety Picks.

The RLX comes from a long line of full-sized Acura sedans that, for various reasons, have been slow-sellers in the marketplace. Though it seems underwhelming when compared to similar competitors, the 2018 RLX is one of Acura’s most enthusiastic revamp efforts.

Have you driven a 2018 Acura RLX?
Rank This Car