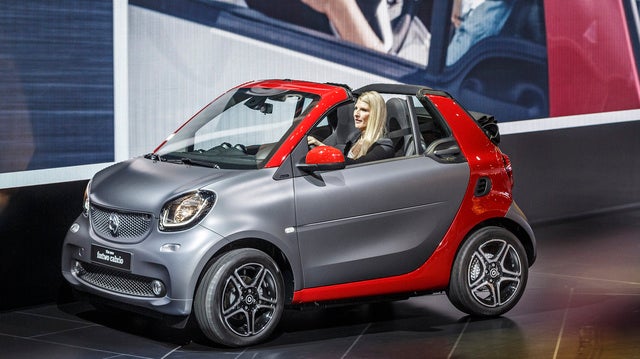 Want proof that big things can come in small packages? Look no further than the smart fortwo. It’s a 2-seat urban runabout that takes up minimal space for the ever-crucial challenge of city parking, and yet it's fun enough to whip around city streets. The very nature of its diminutive proportions causes the smart fortwo to call attention to itself.

The fortwo is in its third generation, but American buyers would recognize it as they would the second generation. The first generation was sold outside the U.S. and until 2007 was something of an automotive oddity. But then parent company Daimler brought it to the American market, where it became a stable for frugal-yet-fun motoring. The new generation of the smart fortwo arrived in coupe form for the 2016 model year and is being carried over to 2017, though a new convertible trim arrives this coming model year as well.

Both trims have a wheelbase that is slightly longer than the previous generation's, with a 4-inch wider track. The fortwo is also slightly less than a half-inch taller and a couple hundred pounds heavier. Take a look at the model and you can see that added weight put to work. The new iteration looks like a more considerable car, with more muscular fenders and big, brooding headlights. Like the generation before it, the 2-passenger fortwo has a two-tone paint job, with the primary paint scheme set off by a silver “blade” that runs from below the door to the roof.

The convertible top opens in just 12 seconds, and smart claims this can be done even at top speed! This is because the fortwo Cabrio is not a full convertible–the roof and rear window area are cloth and retract toward the trunk. This top also has a mid-range open position, which operates like a large sunroof and can be operated from either a toggle in the vehicle or the key fob. Putting the top down further accentuates the smart's blade design.

Despite its small size, the smart fortwo has plenty of head and legroom, even for taller occupants. The fortwo is also capable of carrying large cargo items. The rear of the hardtop trim has a twin-tailgate section that opens wide and can even accommodate some large items when you fold down the passenger seat.

The fortwo is available in passion, prime, and proxy trims. Standard features include a 3-spoke multi-function steering wheel, a 3.5-inch color display centrally located in the instrument cluster, smart radio, and Bluetooth hands-free calling with streaming audio. The overall interior has a very unorthodox and eye-catching design, with bright, unique color schemes.

Optional features include a leather interior, a smartphone cradle, a height-adjustable driver’s seat, and power-heated side mirrors. You can also get an 8-speaker JBL premium audio system, an attractive ambient lighting system, or a panoramic sunroof as additional options. An available sport package adds a sport-tuned suspension, upgraded 16-inch alloy wheels, and paddle shifters.

The smart fortwo is powered by a 0.9-liter 3-cylinder turbocharged engine that makes 89 hp and 100 lb-ft of torque. Power is sent to the rear wheels through either a 5-speed manual or “Twinamic” 6-speed twin-clutch semi-automatic transmission The fortwo's small size allows it to be incredibly agile–its 22.8-foot turning radius will pay dividends when making quick U-turns, while its diminutive footprint will allow you to dart in and out of traffic at rush hour.

Fuel economy for the smart fortwo coupe has not been listed for 2017. This being the sophomore year of the new model, expect fuel economy to be close–if not the same–to 2016 numbers of 32 mpg city/39 highway/35 combined with the manual or 34/39/36 with the automatic.

The fortwo comes standard with eight airbags, an electronic stability program with hill-start assist, and something called crosswind assist. The size, shape and weight of the smart could make it susceptible to being thrown off course by a strong wind, so the crosswind system can sense those winds and make steering adjustments to keep the vehicle on path. Optional safety gear like a proximity-warning function and rear park assist will make fitting the fortwo into any space even easier.

Though not big on size, the smart fortwo brings a lot to the table. From its bold styling to its surprisingly spacious seating, the fortwo makes a big statement. In daily urban life, the ability to park anywhere, dart in and out of congested roads, and fit a surprisingly large amount of items make purchasing a smart fortwo a practical choice, as well as a passion-driven one.

Have you driven a 2017 smart fortwo?
Rank This Car