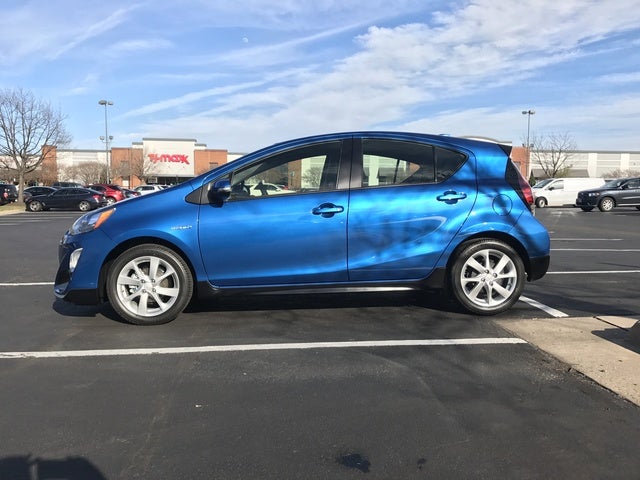 The Toyota Prius has the most recognizable name in the world of hybrid automobiles. It debuted 20 years ago with a single model and a distinct, aerodynamic shape. In 2012, Toyota added the Prius v hatchback wagon, Prius Plug-In (now called the Prius Prime), and the Prius c subcompact to the lineup to grow the hybrid’s appeal.

The Prius c achieves particularly high fuel economy, thanks in large part to its smaller size, and in 2017 it remains one of the cheapest hybrids available and Japan’s best-selling automobile. It got a facelift for 2015 with a revised front bumper and new headlights and taillights, and 2016 models received a number of standard safety features with the Toyota Safety Sense C package. The 2017 Prius c is conventionally styled by Prius standards, with fewer body creases and less outrageous lights—the casual observer might even mistake it for a Yaris. It’s available in four aptly named trim levels—One, Two, Three, and Four—and starts at just over $20,000.

A 1.5-liter 4-cylinder gasoline engine that makes 73 hp and 82 lb-ft of torque is the only engine available for the Prius c. This engine is paired to a smaller hybrid system than that in the rest of the Prius range, and total output is just 99 hp. While the Prius c is a subcompact, it’s still a 4-door car that weighs about 2,500 pounds, and these power figures will allow it keep up with traffic, but that’s about it. Where this car really shines, of course, is between fill-ups. With fuel-economy figures of 53 mpg city, 46 highway, and 50 combined, it’s hard not to see the appeal, especially given its price. The high sticker price of earlier Priuses meant it could take years of driving for the fuel savings to make up the difference in cost compared to a conventional commuter sedan. With the Prius c, though, a $20,150 price tag for the base trim means buyers can start counting their savings pretty much immediately. An EV mode allows the car to run exclusively on electric power for up to a half-mile at low speeds, while an Eco mode limits the throttle response and climate-control system for extra efficiency.

The Prius c handles like a conventional subcompact should, avoiding the numb, sterile feel of previous hybrids. While not exactly tiny, its size makes it ideal for urban maneuvering and tight parking. Both the battery pack and fuel tank fit under the rear seat, so the inside of the car is roomier than one might expect and offers adequate passenger room in both the front and rear. The base One trim is inexpensive, but comes with turn-signal-integrated power mirrors, automatic climate control, and a USB port. Higher trims include conveniences like in-dash navigation, heated front seats, and a reversing camera, and a standalone options package adds a power moonroof and alloy wheels. The Prius c’s build quality is typical Toyota, but with a full hybrid powertrain at such a low price, the fit and finish are not exactly luxurious.

While the Prius c is one of the most fuel-efficient cars you can buy, it isn’t quite the safest. The Insurance Institute for Highway Safety (IIHS) gave the 2016 model Good scores in most crash testing, but only an Acceptable rating for the small-overlap frontal test, while the 2017 Prius c received a 4-star overall rating from the National Highway Traffic Safety Association (NHTSA). That said, it does come with antilock brakes (ABS), traction and stability control, and daytime running lights, as well as the Toyota Safety Sense C package with automatic emergency braking, lane-departure alert, and automatic high beams.

The Prius c is the cheapest new hybrid out there and the most fuel-efficient non-plug-in hybrid you can buy. Those attributes have made it the second best-selling Toyota hybrid after the original Prius, and they will continue to draw buyers even as gas prices remain relatively low.

TheHorror The original Prius looked distinctive? It was remarkably similar to the Echo, actually.

Have you driven a 2017 Toyota Prius c?
Rank This Car