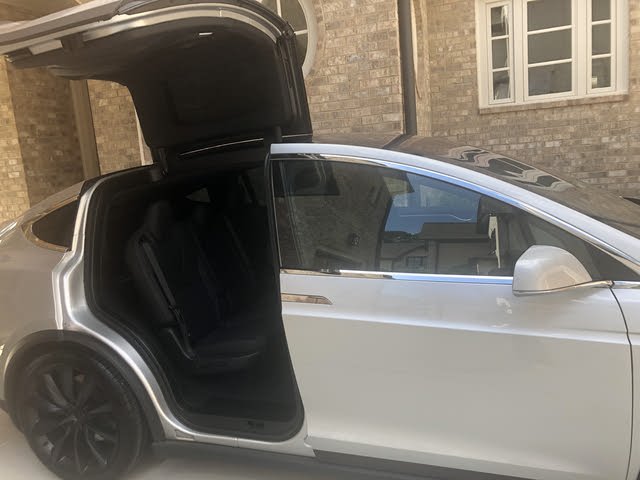 It sounds like a Sphinxian riddle—what’s more efficient than a hybrid, as quick as a sports car, and can carry up to 7 passengers? The answer—the 2017 Tesla Model X.

The Model X is Tesla’s all-electric, 4-door SUV that was first introduced last year. Tesla doesn’t follow the regular model-year schedule, instead rolling out product updates on a continuous basis, so it’s hard to say exactly what’s new for 2017. The most notable change from last year’s model, however, is that the second row of seats now folds flat, increasing this SUV’s “utility” by extending the cargo space to 88 cubic feet.

The Model X 75D comes with a 75-kWh battery pack, a 237-mile driving range, and an electronically limited top speed of 130 mph. Its efficiency numbers are, of course, amazing—the EPA estimates that the 75D gets the equivalent of 91 mpg city, 95 highway, and 93 combined. The same goes for its acceleration—0-to-60 mph in 6.0 seconds. Not bad for a 5,000-pound vehicle.

The electric motor, with its instant thrust and face-numbing acceleration, is the sportiest part of the Model X. The car’s handling doesn’t have the same high-end feel, but it’s more stable and dynamic than you’d expect from an SUV. The Model X’s air suspension and hushed powertrain deliver a comfortable and quiet ride that’s made even smoother by the standard 20-inch wheels, and it can tow up to 5,000 pounds. Optional 22-inch wheels add a little bump to the ride and lower the towing capacity to 3,500 pounds.

In some ways, the Model X looks like a larger, stockier version of the Model S sedan, which wowed critics with its debonair styling. No one is raving over the Model X’s looks, but no one is bashing them, either. The hatchback shape, aerodynamic slimming toward the roof, canted rear window, and lengthy hood keep the Model X from looking like a minivan, which is a positive for most prospective buyers. Its most notable exterior aspect is the rear “falcon-wing” doors that open vertically. If you love how they look, great, but be aware—they’re the consensus drawback for the Model X. Because the door hinges take up so much of the roof, you cannot attach a roof rack or cargo carrier to the top of the car. And if you’re parking in a spot without much room next to or above your Model X, something is going to get scratched.

The Model X’s already pleasant ride is made even more so by the comfortable seats, which can be configured for 5 to 7 passengers. The first and second row provide ample room, while the available third row is probably best left for the kids. A panoramic windshield and large side windows provide great sight lines for the driver, who can also rely on the wide-view reversing camera. The interior materials are just luxurious enough to justify the price tag of around $100,000, with leather, suede, wood insets, and matte silver accents throughout.

As for features, every Model X comes with navigation, LED headlights, a panoramic windshield/sunroof combination, keyless ignition, power adjustable heated front seats, Bluetooth connectivity, and a power liftgate. A 17-inch color touchscreen that controls the vehicle’s infotainment and HVAC systems is also standard and has been praised by experts.

There are no crash-test results yet for the pricey Model X, but it does come with a slew of safety features, such as a set of 12 airbags, stability and traction control, blind-spot and lane-departure warnings, a crash sensor for high-voltage disconnect, and automatic emergency braking. Other standard items include a forward-facing camera, radar, and 360-degree sonar sensors that support Tesla's extra-cost Enhanced Autopilot self-driving system.

Users ranked 2017 Tesla Model X against other cars which they drove/owned. Each ranking was based on 9 categories. Here is the summary of top rankings.

Have you driven a 2017 Tesla Model X?
Rank This Car

What type of problems are people having with Elon Musk's electric car the Tesla after a few years on the road?