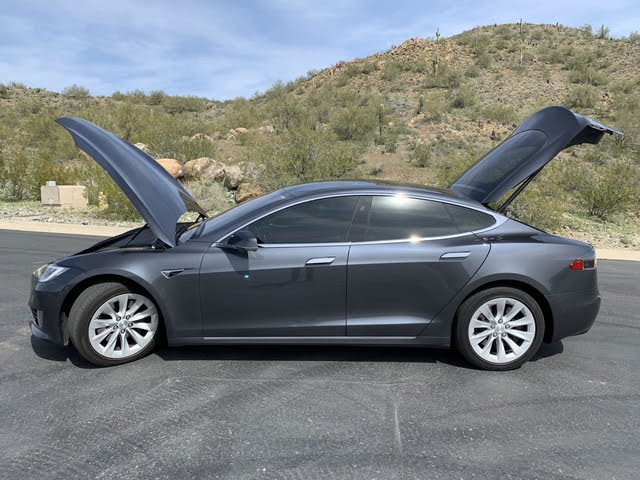 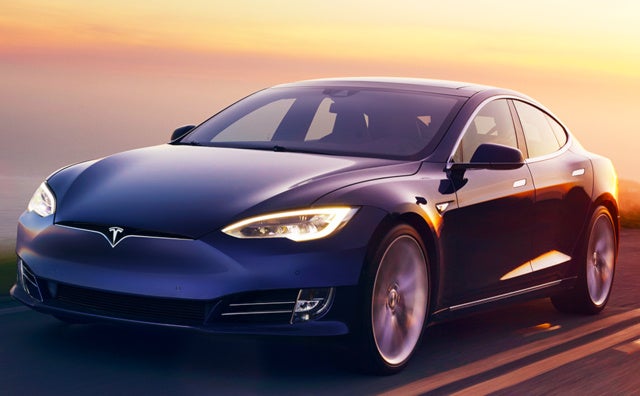 Tesla may be famous for “upgrading” its existing electric cars with over-the-air software updates, but new model years can still bring major changes—even for a nontraditional automaker. The 2017 Model S gets updated taillights and adaptive LED headlights, but the biggest visual change to this all-electric sedan is right up front, with the deletion of a grille in favor of a nose reminiscent of the Model X’s. The update makes sense—after all, electric cars don’t have the same air-intake requirements as their gasoline counterparts.

Aside from charging and looks, however, most things Tesla aficionados love about the Model S remain the same—like its three powertrain choices. The rear-wheel-drive (RWD) 60 and 75 trims both get a single rear electric motor to drive the rear wheels. The 60 starts at $68,000 and has a 210-mile range, while the 75 offers a 249-mile range and sells for $74,500. Both trims come with the same 75-kWh battery, although the 60’s is limited to 60 kWh but can be “unlocked” for $8,500 (before delivery).

The range-topping AWD Model S P100D trim ($134,500) includes a standard motor up front and a high-performance motor at the rear, as well as a 100-kWh battery pack. This setup comes standard with a Ludicrous Speed Upgrade, a setting that rockets the vehicle to 60 mph in an astounding 2.5 seconds. The P100D’s big battery gives it an EPA-rated range of 315 miles as well, making the Model S the first electric car with an official range of over 300 miles.

The tech aboard the Model S isn’t just about emissions and speed, however. While prior Teslas came with autopilot and a semi-autonomous Enhanced Autopilot system, all new models will feature the hardware and software necessary for completely autonomous driving via Enhanced Autopilot or a Full Self-Driving system. That’s possible thanks to an 8-camera setup, 12 new ultrasonic sensors, a forward-facing radar, and an upgraded onboard computer. Although Tesla claims that the 2017 Model S is capable of driving itself, each vehicle’s specific abilities will depend on software updates and government regulations. The Enhanced Autopilot system will be able to change lanes automatically, merge from one highway to another, exit highways, and self-park. Enabling it will cost $5,000 (or $6,000 after delivery), and it will be pushed to the car as an over-the-air software update. When it becomes available, Full Self-Driving will cost an additional $3,000 to unlock ($4,000 after delivery).

Whether they decide to drive it themselves or not, buyers can outfit their Model S with an extensive list of options. The $3,500 Premium Upgrades package adds a HEPA air-filtration system with a “Bioweapon Defense Mode” that can filter out deadly pathogens. Less ominous features include premium ventilated front seats, LED fog lights, turning LED headlights, leather accents, Alcantara dashboard trim, lighted door handles, and a power liftgate.

A $2,500 Smart Air suspension, which is standard on the Model S P100D trim, automatically adjusts the ride height—and remembers manual settings based on GPS coordinates. The $1,000 Subzero Weather package adds a heated steering wheel and seats, wiper blade defrosters, and heated washer nozzles. The $2,500 Ultra-High-Fidelity Sound package includes a 12-speaker sound system with a subwoofer—and SiriusXM satellite radio, if the buyer opts for a sunroof. Additionally, 2 rear-facing seats for children that fold flat when not in use can be added for $4,000.

Mapmike I love that car I gotta have one soon

Have you driven a 2017 Tesla Model S?
Rank This Car

I have a bent steering rod on model S 2017 75D. Trying to replace it. Found one that is part of a whole steering assembly. I cannot remove the rod (red cloud in picture). tried to twist the piece that...

I agreed to purchase a car from private party Jan 22. I wired over $60k to your third party Auto Pay. I still don't have the title. The bank says they sent the title 2/14. Auto Pay says they won'...

How can I avoiding paying florida 7% tax on my car which has a Carmax appraisal . I was told said 7% fl tax does not apply if one "trade-in" toward the purchase of another car