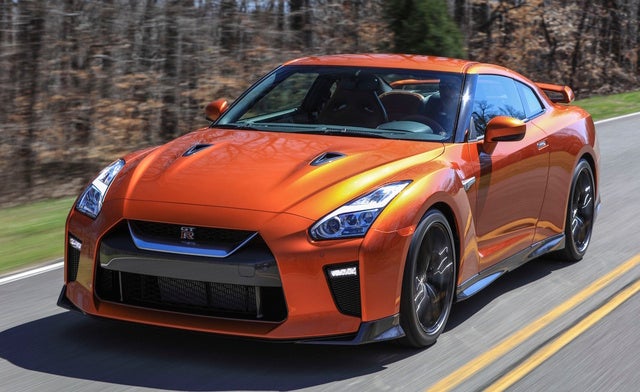 The upcoming model year, 2017, marks the 10th year of production for the current version of Nissan’s GT-R, aka Godzilla, a performance car that has shaken things up more than almost any other in recent memory, thanks to its advanced drivetrain, intensively engineered design, and the fact that it will outperform plenty of established supercars for a fraction of their price. Nissan unveiled the 2017 GT-R at this year's New York International Auto Show, revealing it to be largely the same automobile, but with exterior tweaks that are both functional and cosmetic, along with more power, a new interior, and a new metallic orange paint color.

At first glance, the most noticeable change to the 2017 Nissan GT-R is its nose, which has been reshaped. The side sills have been also reshaped, as have the enlarged rear diffuser and new C-pillar, in order to make the body more aerodynamic. Pricing for the 2017 version will be similar to that of the previous model, at over $100,000. The GT-R is therefore very expensive--but considering the feats it's capable of, it represents a tremendous value. Along with the Corvette and a handful of bare-bones track-day cars, the GT-R offers just about the most performance per dollar available on four wheels, even if its sticker price has become significantly higher over the years.

Under the hood of the GT-R is the familiar hand-assembled 3.8-liter twin-turbo V6, which has grown consistently more powerful during the GT-R’s production run. For 2017, Nissan has added 20 ponies, bringing the total to 565 hp and 467 lb-ft of torque driven through a dual-clutch 6-speed automatic transmission with paddle shifters. A titanium exhaust comes as an enticing option. One of the most impressive of the previous GT-R’s many jaw-dropping performance stats was a 0-60 mph time of 2.7 seconds, and the extra power for 2017 might just be enough to drop it a tick to an even more ridiculous number. The GT-R sends that power to all four wheels, and the system’s computers can vary torque from 100% at the rear to 50/50, depending on factors like speed, lateral acceleration, tire slip, and yaw rate.

The chassis and body of the 2017 GT-R have both been stiffened. This should improve the handling, which is already extremely sharp and precise (even with the vehicle's relative heaviness). For everyday driving, the GT-R is surprisingly tame, with a suspension that can be adjusted through different driving modes. For track day, though, it can be a savage performer. The GT-R’s formidable electronics, driver aids, and computer systems have drawn criticism from driving purists who have said it feels too much like playing a video game and not enough like driving an actual car. It’s those electronic systems, however, that enable the GT-R to effectively put all its power to the ground, handle predictably, and simply go around a race course very quickly. These systems also allow just about anyone off the street to hop straight into a GT-R and be able to drive quickly and confidently.

One of the major changes for 2017 appears on the inside. The GT-R has become a more comfortable, premium-feeling car than before, with fewer controls and switches in the cockpit for a simpler operation. Higher-quality materials, larger seats, a larger 8-inch touchscreen display, and redesigned paddle shifters all add to the premium look and feel of a car that’s now comfortable but still brutally fast. One complaint from previous owners was that the GT-R wasn’t quite as usable as a daily driver as they had initially believed, and the new model seems to be aiming to address that issue. Another appeal of the GT-R for those who value usability is the fact that it has two back seats. Unlike the rear seats in a Porsche 911, however, the GT-R's will actually fit human beings.

High-end cars like the GT-R are rarely crash-tested, but Nissan's sports car is a solidly built, heavy vehicle that covers all the basics in terms of safety equipment. Plus, a rear-view camera now comes standard. But while the GT-R offers outstanding performance value and is manufactured by one of the leading Japanese automakers, that doesn’t make it cheap to maintain. As a highly strung, highly engineered, hand-built supercar, it requires more intensive and specialized servicing than other models wearing a Nissan badge. That’s just something to consider, however, and it takes nothing away from the GT-R’s bar-raising capabilities, which now come in a more usable and comfortable package for the 2017 model year.

Guru7RMKK is it for sale?