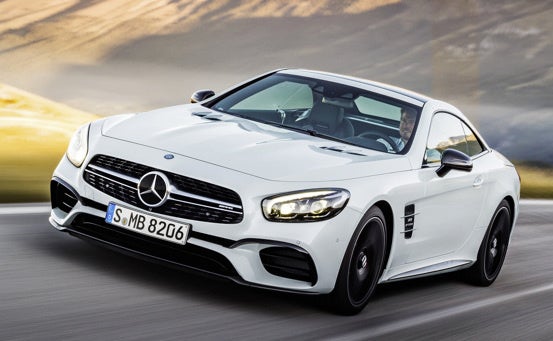 For many years, Mercedes-Benz stuck with a primarily numerical naming system for its model lineup, with descriptive letters trailing. Then it switched over to primarily letters followed by numbers. The company recently overhauled its naming convention yet again in an effort to clean up certain inconsistencies with the letter system. So now the automaker tackles the luxury market with a core lineup composed of five letters, the most important of which are S, E, and C (in descending order). And the roadsters? Both models borrow nomenclature from the S-, or “Sonder” (Special), Class, the flagship of Mercedes’ range. The smaller of the two, the SLK, was replaced with the SLC for 2017 (no place for a “K” anymore). But at the top still sits the SL, termed the “Super/Special Light,” a unique combination of comfort and performance for discerning luxury roadster fans.

Last redesigned for 2012, the 2017 SL-Class represents a mid-generation refresh. To begin with, check out the front fascia: you’ll see sharper, flatter headlights, which Mercedes calls the “standard-fit LED headlight system,” something of an attempt to mimic the raked headlight setup currently in vogue among premium or sportier cars. The lower air intakes have also grown quite a bit. Even with the narrower headlights, looking head-on at the front of the car gives one the impression that everything has basically grown larger. The grille has also been given a cleaner appearance—Mercedes claims it drew inspiration from the 300SL Panamericana, an older coupe model best known for its signature gull-wing doors.

Although largely unchanged, the SL’s engine choices are solid all around, if somewhat less performance-oriented at the bottom end. Choosing between them basically means considering what type of driving you plan to do most. The SL450 is a comfy sports car, better as a grand tourer. The SL550 adds enough power to make it a dynamic driver as well as a premium luxury vehicle. And the AMG SL63 and 65 are the true performance trims—you’ll likely already know if one of these is the vehicle for you.

It's to the credit of the SL-Class that its 2017 iteration a) loses some weight, to the tune of 220 pounds, thanks to a new aluminum bodyshell, and b) sports improved handling technology. The Dynamic Select system offers 5 drive modes: Eco, Comfort, Sport, Sport+ (think flat and fast), and Individual (lets the driver manually adjust driving parameters). An Active Body Control function reduces body roll, the vehicle will automatically lower itself for better aerodynamics at high speeds, and a button in the cockpit allows you to raise the body in order to better negotiate rough or rutted roads.

Mercedes outfits its new SL models with an electrohydraulic vario-roof that can open or close at speeds of up to 25 mph; a new automatic trunk separator adjusts trunk space according to whether the top is up or down. The “vario” in the roof name refers to the “Magic Sky Control” system, which is able to lighten or darken the panoramic roof in response to outside brightness in a matter of seconds.

The interior of the SL-Class is as luxurious as its price tag suggests. There is a broad range of trim materials, and an ambient lighting feature is available in three colors: solar red, polar blue, and polar white. The two-tube gauge setup and analog clock on the dash offer a classy contrast to the TFT multifunction driver’s display and larger infotainment screen. A Harman Kardon Logic 7 Surround Sound system comes standard, with a 600-watt output and 11 speakers. Available as an option is a 900-watt, 12-speaker Bang & Olufsen BeoSound AMG sound system. A standard “Frontbass” system uses cavities in front of the footwells to produce a more resonant bass, and an optional smartphone integration package offers Apple CarPlay capability.

The SL-Class is too much a premium car to be crash-tested by either the National Highway Traffic Safety Administration or the Insurance Institute for Highway Safety. There is, however, an optional driver assistance package that provides the usual array of high-tech safety features, like a Mercedes-specific cruise-control system with steering assist, an active brake assist, forward autonomous braking, blind-spot and lane-keeping assist, and a rear-end collision mitigation system. Standard LED headlights automatically adapt to external factors like reduced visibility and cornering.

What's your take on the 2017 Mercedes-Benz SL-Class?

Users ranked 2017 Mercedes-Benz SL-Class against other cars which they drove/owned. Each ranking was based on 9 categories. Here is the summary of top rankings.

Have you driven a 2017 Mercedes-Benz SL-Class?
Rank This Car