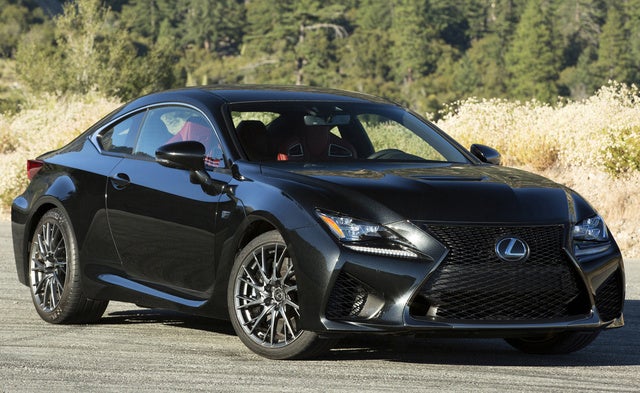 Lexus may be late to the performance luxury vehicle game, but it’s making up for lost time with an impressive selection. From the original manic LFA supercar (now retired) to the recently launched GS F sedan, Lexus is beginning to flex its performance muscle with its F lineup. Which of these cars are you most likely to see out on the road? That would be the entry-level RC F coupe, with a starting price tag of $64,165 for the 2017 model.

The RC F takes the RC coupe’s aggressive-looking exterior and turns it up a notch. A giant grille is flanked by large bumper vents that provide additional cooling to the massive brakes. A new vented hood feeds cool outside air to the engine, and a range of available 19-inch wheels gives the RC F various levels of attitude. The rear features four exhaust tips, a revised bumper, and a rear wing that rises at speeds above 50 mph to keep the vehicle grounded, and the roof and rear wing are available in carbon fiber to help cut weight.

The RC F’s interior was designed with crisp, straight lines and a clear layout to minimize distraction. Little details such as a paddle-shifter-equipped sport steering wheel and carbon-fiber accents highlight the coupe’s luxuriousness, and the high-back sport seats help keep everyone in place during hard cornering. Infotainment duties are handled by a display screen and Lexus’ Remote Touchpad, a laptop-like touchpad. New for 2017 is Scout GPS Link, which uses an app to sync your Android or Apple smartphone to the RC F’s infotainment display. Optional upgrades include the Enform App Suite, a navigation system, and a Mark Levinson audio system.

For the RC F, Lexus bucks the turbocharging trend followed by many of its competitors, opting instead for a naturally aspirated 5.0-liter V8 engine that produces 467 hp and 389 lb-ft of torque. This V8’s power figures are not as impressive as those of others in the performance luxury segment, but the RC F is no slouch. With an 8-speed automatic, the RC F rockets to 60 mph in 4.4 seconds and hits a top speed of 168 mph. EPA fuel-economy figures stand at 16 mpg city, 25 highway, and 19 combined.

The 2017 model year sees Lexus introduce a new adaptive suspension system for the RC F in an effort to solve one of the biggest issues of previous models: a very uncomfortable ride. The RC F features a number of other performance items, including Brembo brakes, a Torsen limited-slip differential, and a speed-sensitive electric steering system.

As for safety, the RC F comes with 8 airbags, traction and stability control, a reversing camera, and Lexus Enform Safety Connect. This telematics system will alert emergency services in the event of a crash, locate your vehicle if stolen, and call for roadside assistance. Optional features include blind-spot monitoring with rear cross-traffic alert, adaptive cruise control, and collision-mitigation braking.