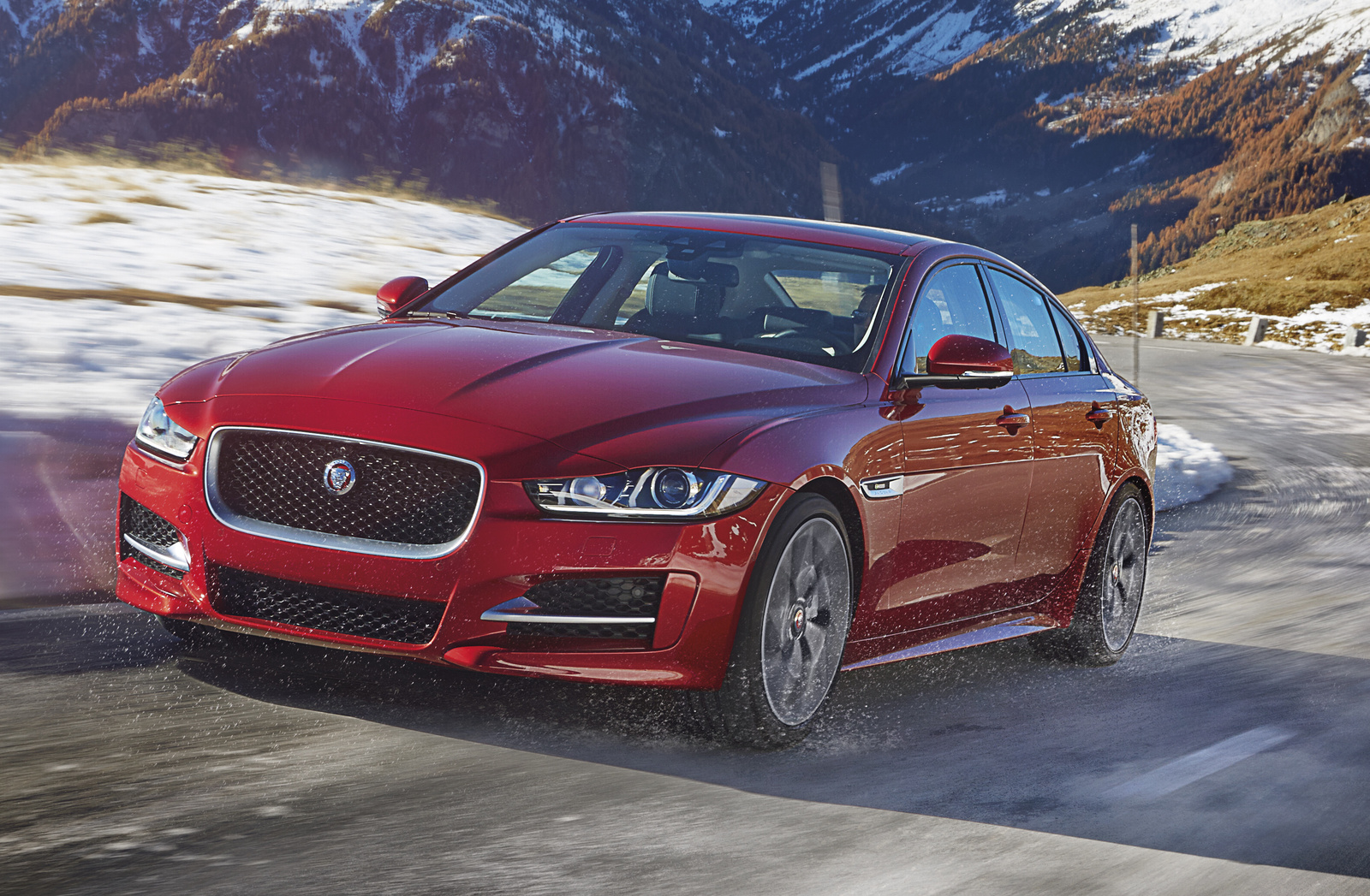 BMW invented the category. Everyone else has tried it. The compact luxury sedan is typically what hooks people to or steers them away from a car brand. Jaguar, after the X-Type between 2001 and 2008, had most shoppers looking in other directions. The 2017 XE is out to rebuild Jaguar’s image in this relatively inexpensive, highly competitive segment. 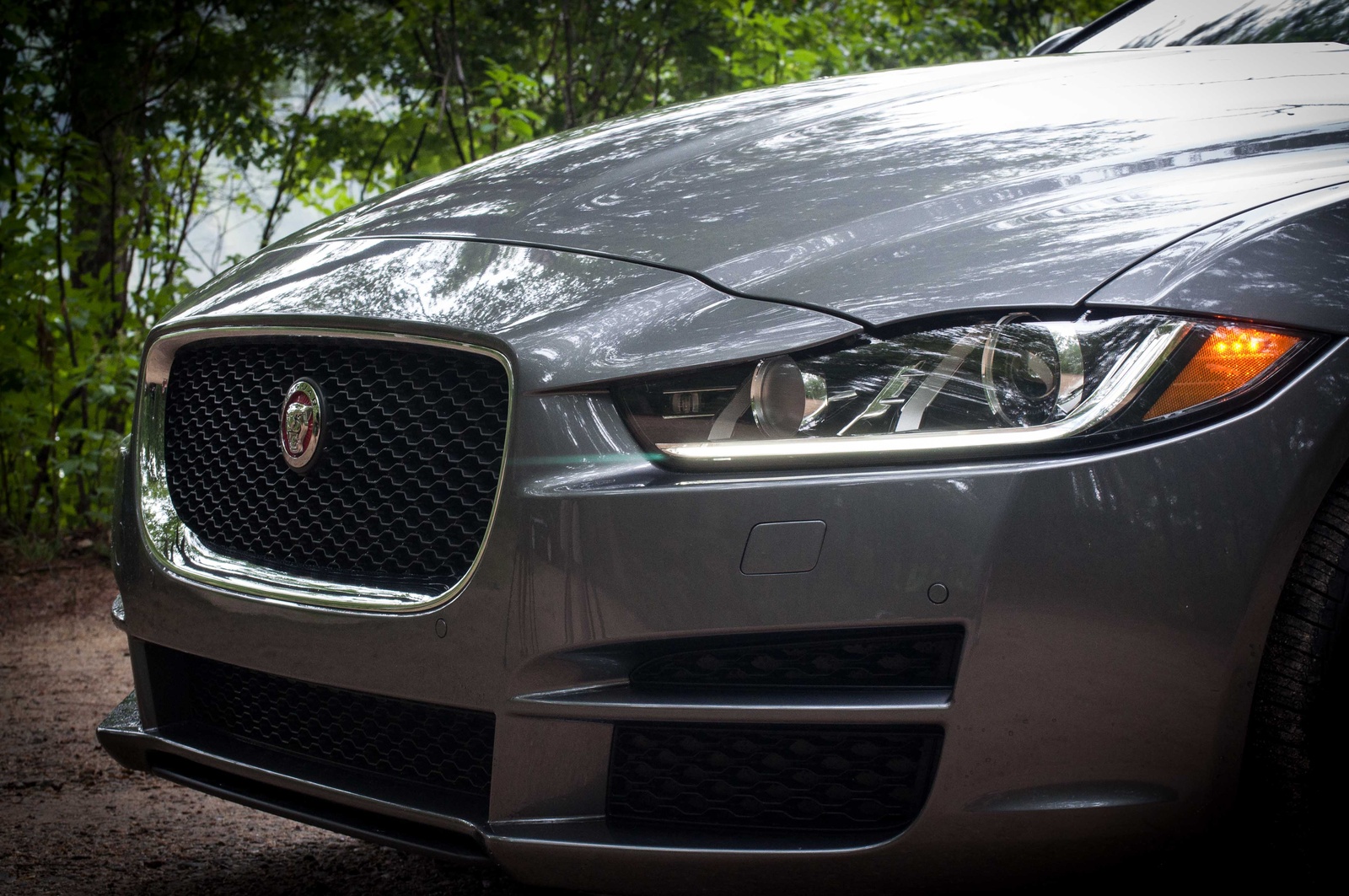 Jaguar’s clean, uncluttered design scales down to compact size quite well—almost a little too well. It’s tough to discern the XE from the pricier, midsize XF even at close range. The J-shaped headlights, U-shaped LED taillights, upright honeycomb grille, long hood, short tail, and the rearward-sloping roof have all been finely tuned for years now, with only a minimum of creases along the side panels for a finishing touch. At least these days, even when Jaguar revels in continuity across its lineup, you can tell the XE apart from a 3 Series, C-Class, A4, or just about anything else. Our car’s Ammonite Grey paint over Light Oyster gray leather lent it a decidedly stealthy appearance, with only the polished black 18-inch wheels and chrome trim around the doors adding some flash.

The XE’s simple, upright cockpit is all business, except for the upper dashboard trim that seamlessly connects to the doors. These curves, including the rounded rectangles forming the air vents, contrast with the rectangular center stack and console and the flat passenger-side dash. Again, it looks just like the XF or the F-Pace SUV, just squished a few inches here and there. The two gray tones in our car, offset with a few aluminum trim pieces and shiny black plastic, exhibited good fit and finish and a quality feel. The thick three-spoke steering wheel and attractive instrumentation are straight out of the F-Type sports car, save for a very low-rpm tachometer. 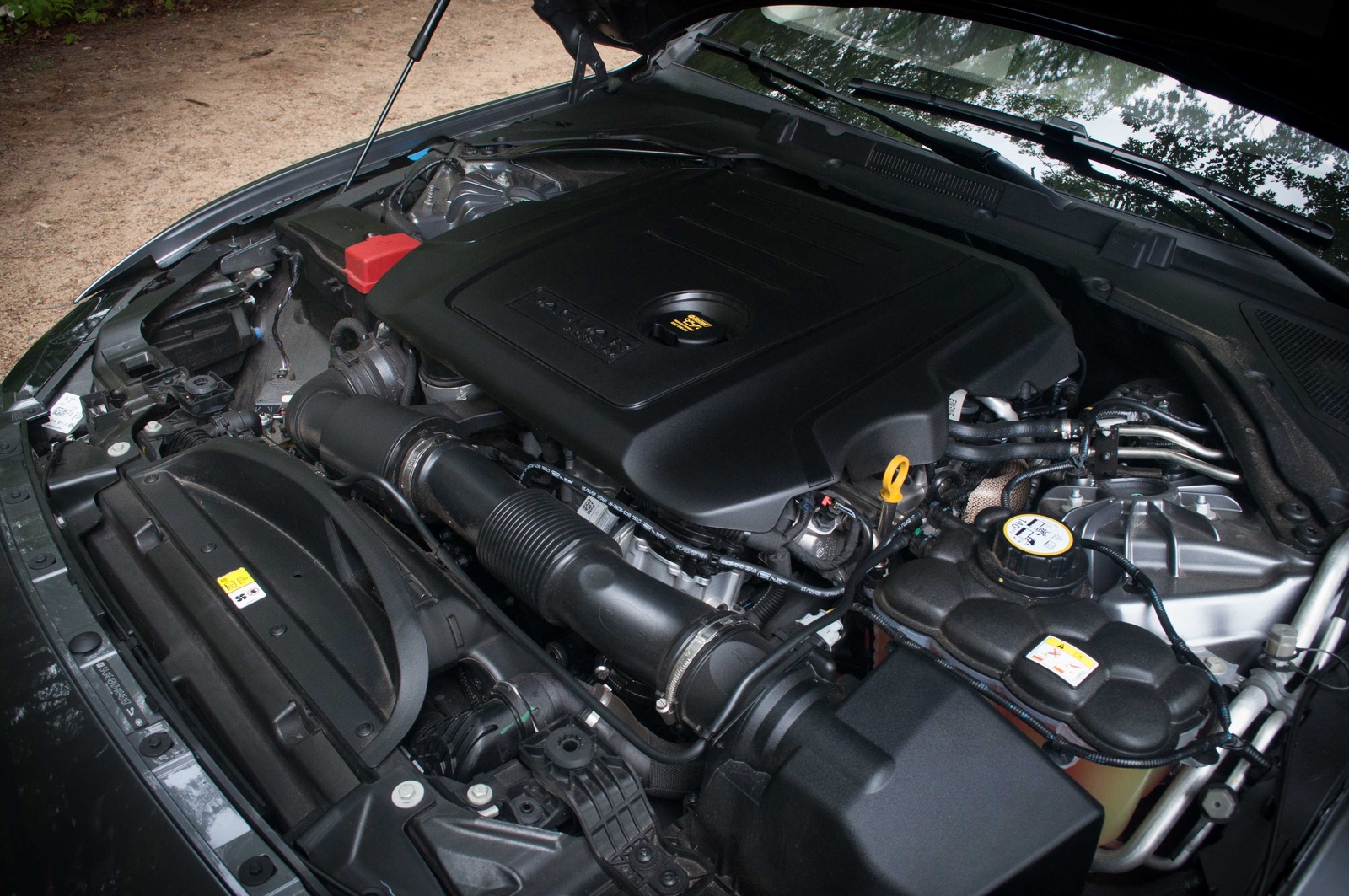 A 4,800-rpm redline is a strange sight in a Jaguar, and that’s because of a most unconventional engine choice: a diesel! The XE is the first diesel Jaguar has ever offered in the U.S., and while it's expectedly weak during high-speed passing, this 2.0-liter turbo 4-cylinder has decent grunt for around town and accelerating up to lower highway speeds. Output stands at 180 horsepower and 318 pound-feet of torque. The usual diesel clatter pervades at idle, but only when cracking a window. Smell and soot? Not an issue. A urea-based solution called AdBlue cleans up the diesel exhaust—this is the very thing Volkswagen didn’t put into its so-called “clean diesels”—and its trunk-mounted tank must be refilled at each oil change. Inside, the XE is quiet and damped at all speeds. Vibrations are quelled and the engine pulls smoothly, even excitedly, when setting the 8-speed automatic transmission to Sport and switching on the Dynamic engine setting. But when a new Honda Civic presents a stoplight challenge to a $53,000 Jaguar, has the solar system realigned?

Thankfully, you can revert the XE back to premium gasoline. Two gasoline engine options—a 2.0-liter 4-cylinder with 240 horsepower and 251 pound-feet of torque or a supercharged 3.0-liter V6 with 340 hp and 332 lb-ft of torque—are available across most of the four trims (the V6 is not available in the base; the four can’t be had at the top). I drove the V6 briefly in Michigan. Needless to say, this is the XE’s ideal engine—plenty of power, snappy response, and pleasing sounds—to match its stellar chassis. Indeed, our rear-wheel-drive (RWD) diesel tester still felt lithe and responsive, plus a little tail happy when provoked; all-wheel drive (AWD) is optional on all trims save for those with the gas 4-cylinder. As far as suspension and steering go, the XE aces them out of the box without the need for adaptive or air-filled dampers. It’s a pleasant car to chuck into curves, with little body roll and a natural steering feel that BMW can’t seem to get right anymore.

So why eschew performance for a diesel? I’d like to say speed rules all decision-making, but my gas bill disagrees. I had a very busy week with the XE diesel, shuffling back and forth twice to New York for the U.S. Open and a Mets game, a video shoot in Massachusetts, and all places in between. Over 900 miles, I averaged 43 miles per gallon. On some highway stretches doing 75-plus, I saw 55 mpg. I didn’t even fill the tank until I hit 617 miles, with another 30 miles indicated on the trip display. Tell that to your Civic friends.

As is usual for a diesel, I overshot the EPA's estimate of 32 mpg city and 42 highway (30/40 with AWD). Gas models are much lower, at 21/30 for both the four and V6 RWD models (a very strange result—and another reason to choose the six). The worst of the litter is the AWD V6, but at 20/29, it’s not all that bad. If long highway drives call you, the diesel is answering. 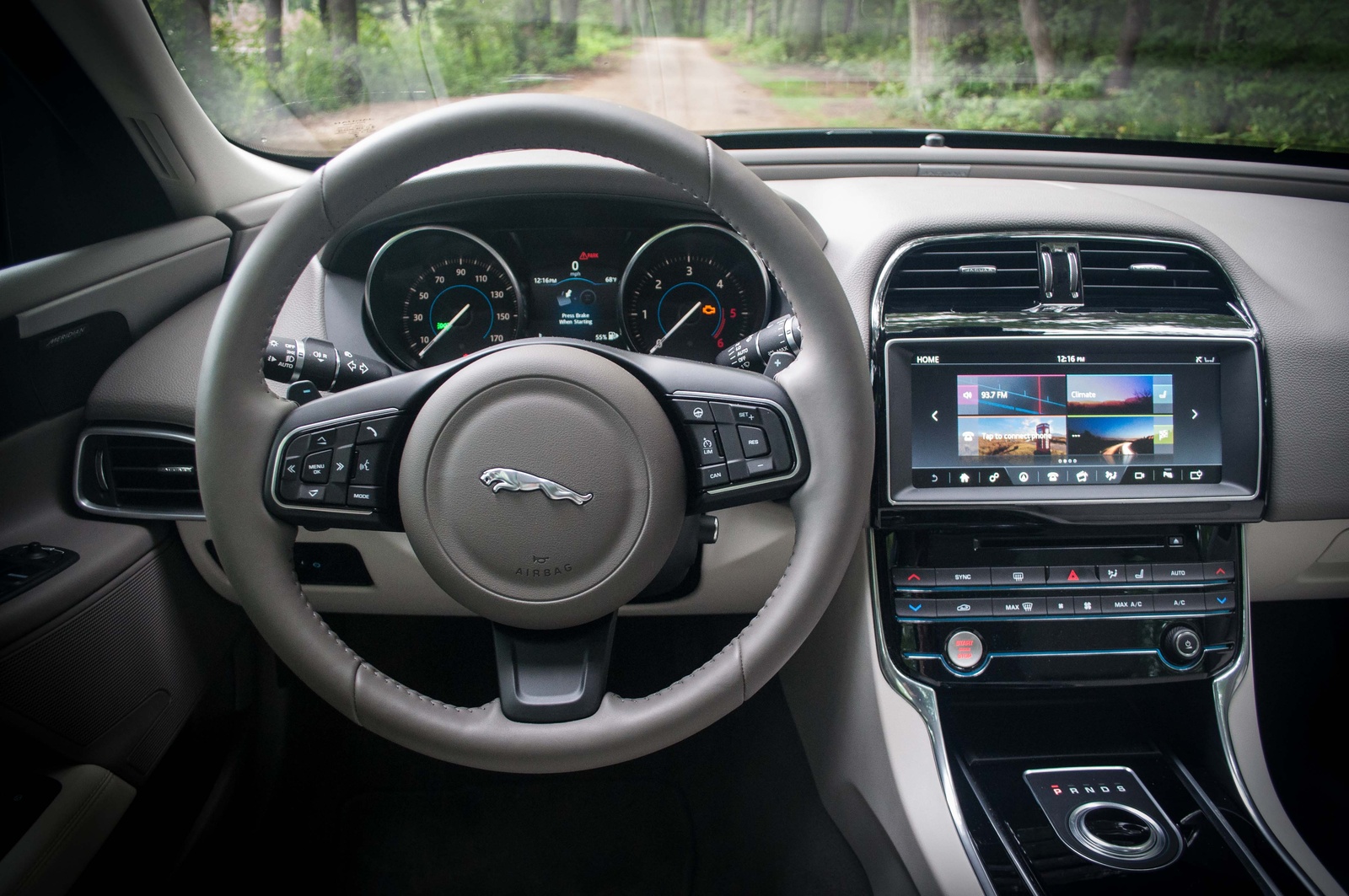 Jaguar values elongated proportions and curvy sheet metal over such petty things as practicality and space. As a result, getting into a Jaguar and trying to see out of one can be vexing. The door openings are narrow, the pillars are thick and slightly intrusive, and the back glass distorts your view with its aggressive slope, not to mention the rear headrests blocking the view even more (they can be folded down). Headroom, even up front, is rather tight. The XE isn’t claustrophobic, but it won’t win any measurement contests, either. Like in the F-Pace, the window switches are located awkwardly high—above the seat memory controls, which I can’t think would be used more than the windows—and yet there aren’t any physical dash buttons for heating or cooling the seats or seeking a radio station.

Intimacy aside, the XE’s comfortable seats are truly supportive on those long diesel drives, instrumentation is easy to see, and there’s enough storage and cubby space. Trunk space is ample for this class, and thank goodness, there’s a spare tire under the cargo floor. Many automakers remove the spare to save space and cost these days. Rear passengers enjoy air vents, heated seat switches, and two power outlets. Another power outlet and 2 USB ports sit within the center armrest. Aqua ambient lighting and xenon headlights (part of the $2,400 Vision package) are welcome nighttime companions. Overall, the XE is just a hair too small to be comfortable for three or more people. 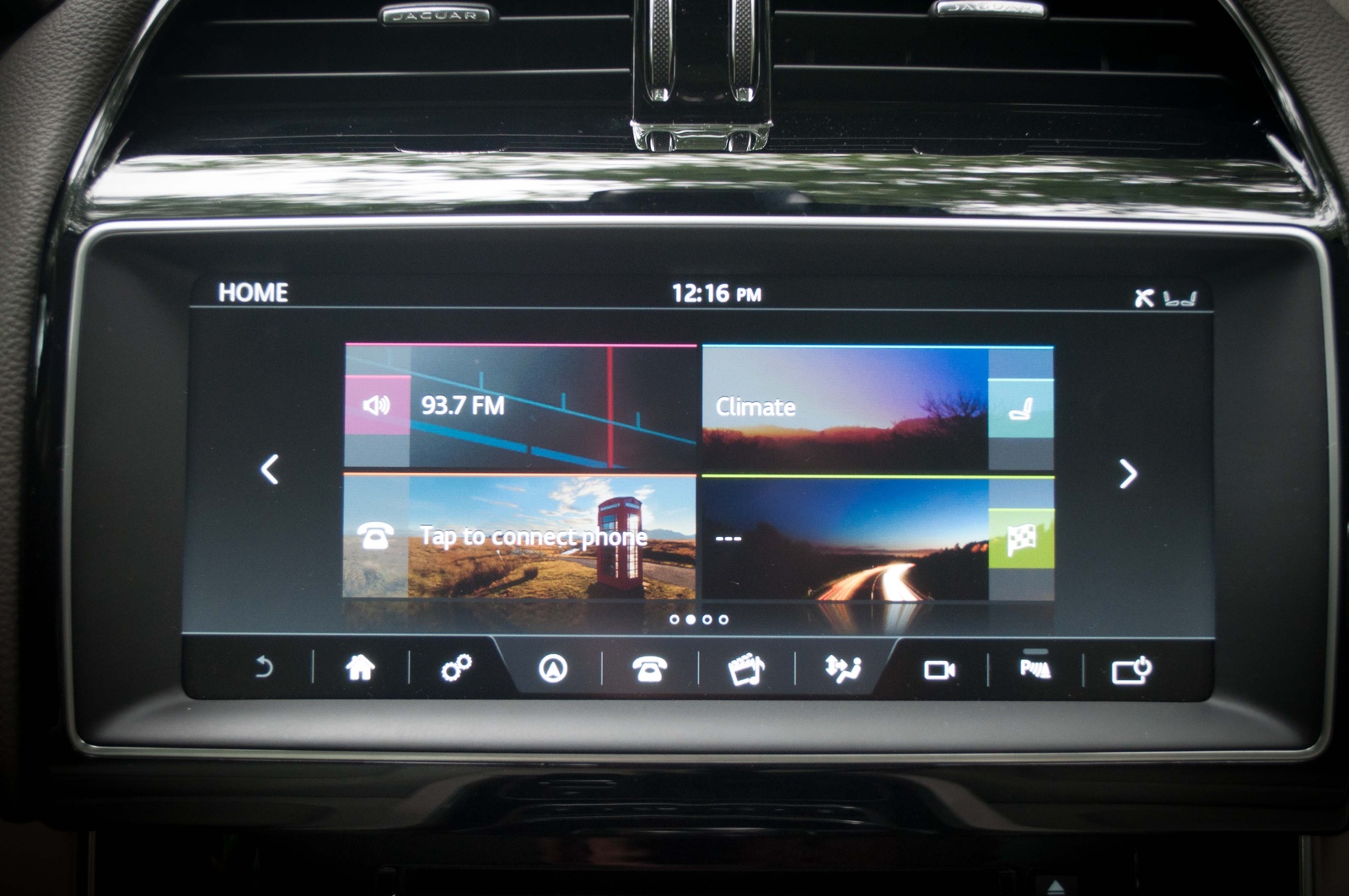 Jaguar overhauled its infotainment system not a moment too soon. But it could have waited a little longer to debug the software. All four of the 2017 Jaguar models with InControl Touch Pro I’ve tried have left me stunned at Jaguar’s execution. Radio-volume and seat controls occasionally won’t respond for seconds. Switching audio sources wouldn’t work for a minute. The Bluetooth may randomly disconnect. When using the backup camera, options my car didn’t have—such as 360-degree views and a trailer guidance system offered on Land Rovers—appeared on screen but obviously couldn’t function. Once on the highway, the backup camera took over the whole screen. The navigation isn’t set up for voice control—the most sensible use for such technology—and if you don’t set a destination before switching on the engine, your entire address entry gets deleted. In the F-Pace, I thought the bugs were just early-build flukes, but they’re not (see more {"id":12,"type":"eLink"}). There’s a lot of potential here. The 10.2-inch screen is clear, easy to navigate, accepts touch and swiping gestures, offers reconfigurable menus, and is generally quick. It just needs to work all the time.

Elsewhere, our XE’s cooled front seats, powered rear sunblind, and 825-watt Meridian Surround Sound system (with three selectable modes including Dolby and DTS) kept my body cool and ears delighted. A head-up display with navigation, speed, gear selection, and cruise control info was continually helpful, though not as detailed as those from BMW. While the power trunk wasn’t necessary, a heated steering wheel will reward anyone who doesn’t live in Los Angeles. 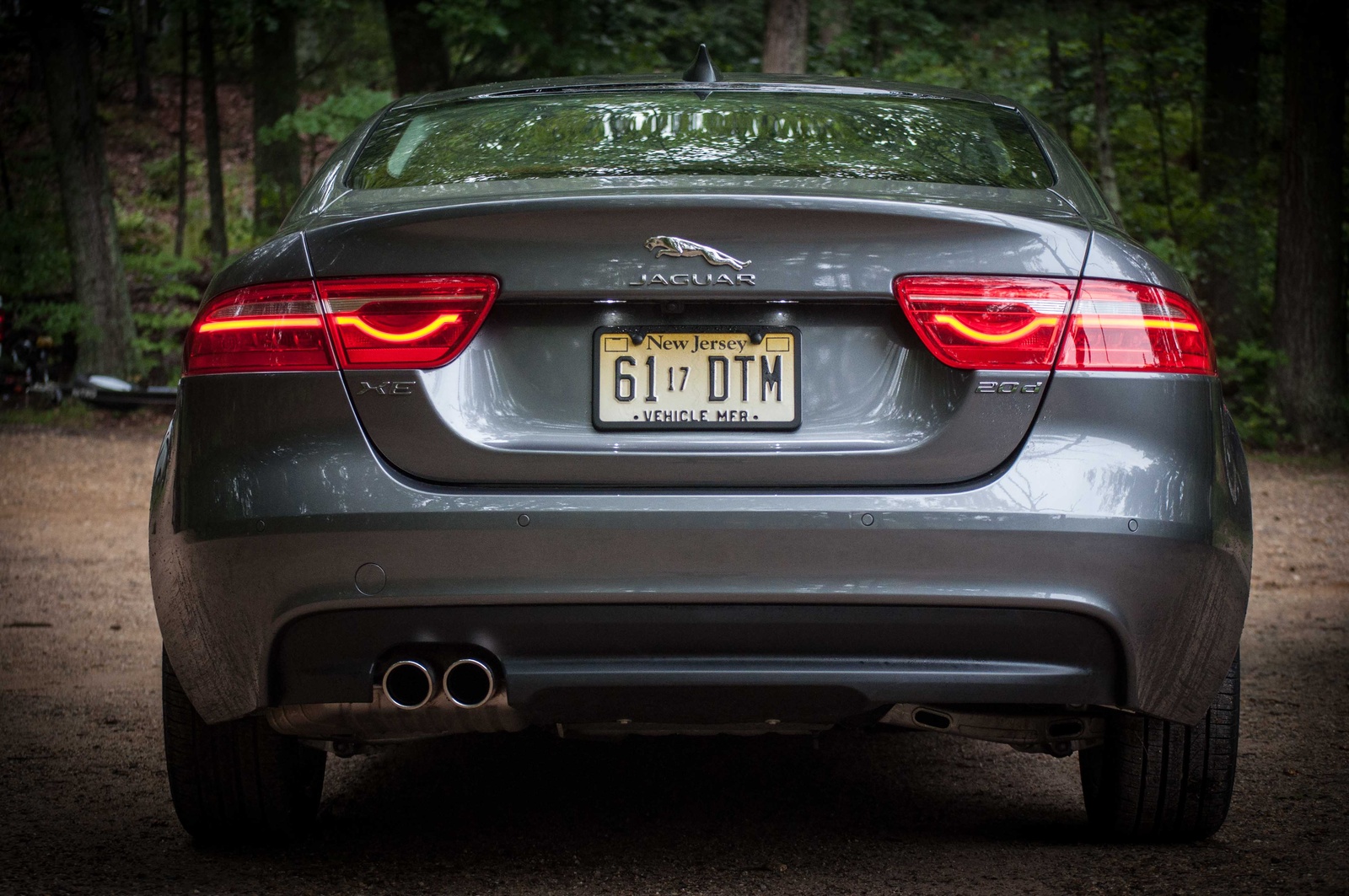 The XE has not been rated by the National Highway Traffic Safety Administration or the Insurance Institute for Highway Safety. Typically, only higher-volume cars get crash-tested, and the XE is still too new. Jaguar’s chassis and body structure of aluminum and high-strength steel should hold up to the toughest tests. Our car had optional blind-spot monitoring that rapidly flashes alerts in each side-view mirror if a fast-moving car approaches from behind. It’s an incredibly useful feature that no other company I know offers. Forward-collision alert, auto-braking, lane-keep assist, and a driver fatigue alert are standard in the top R-Sport trim and optional on others. Adaptive cruise control, 360-degree cameras, and automatic parking are also available as options. 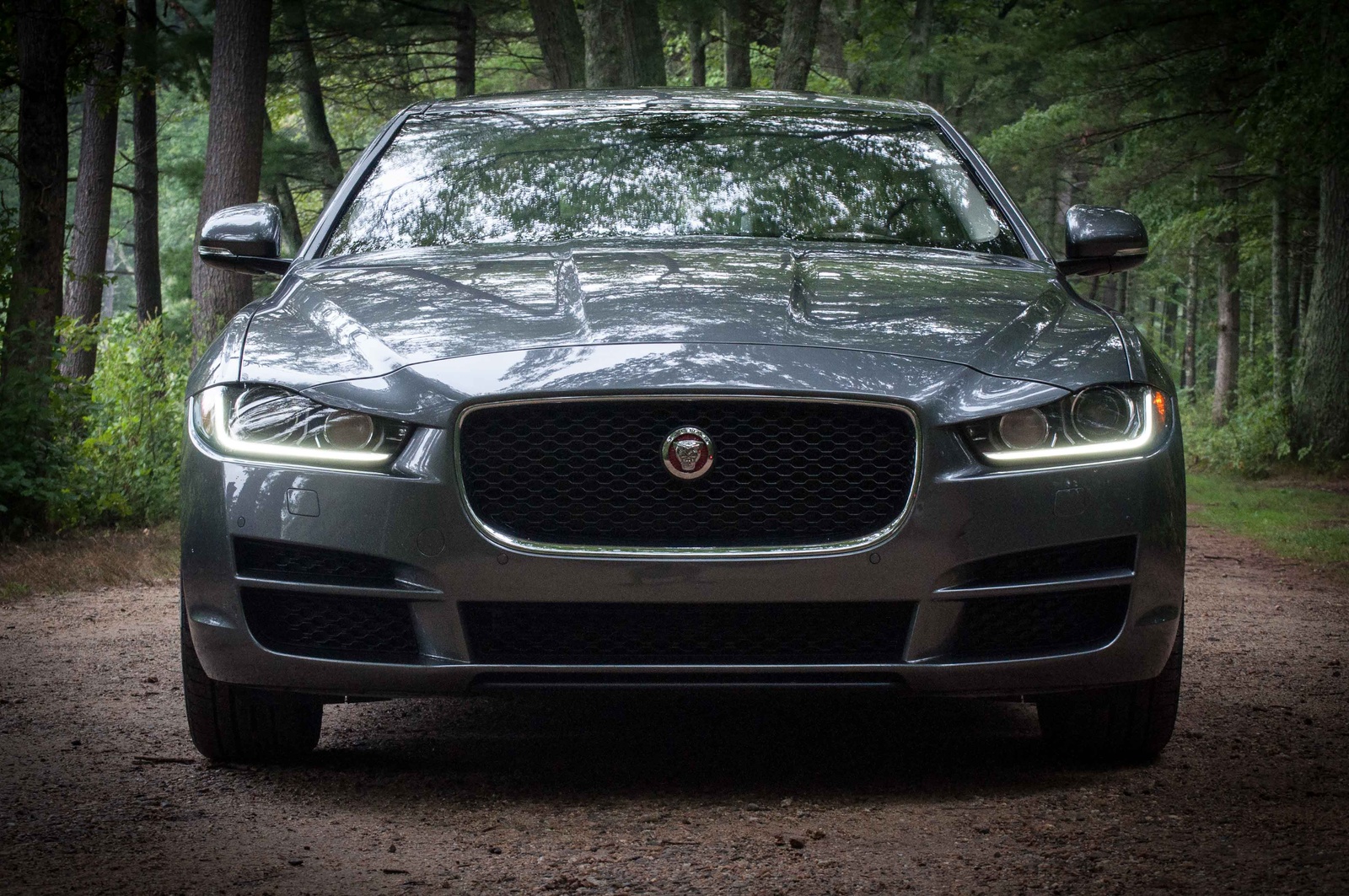 Tech niggles and some space issues aside, the 2017 Jaguar XE impresses in many key attributes (performance, styling, materials quality, and equipment) that shoppers in this class want. Base prices range from $35,895 for a RWD version with the smaller gas engine to $52,695 for the AWD gas V6. The diesel models command a $1,500 premium regardless of trim (base, Premium, Prestige, R-Sport). Our Prestige version was kitted out with $9,590 worth of options, ringing up a total of $53,485, and a similarly optioned V6 version can crest $60,000. None of that is worrisome considering what German and Japanese competitors cost. Jaguar’s 5-year/60,000-mile warranty, including all scheduled maintenance, is a big plus for the price. Once the XE receives a software update that tidies up the electronics, we’d be inclined to rate the XE higher. Still, as a competent and handsome sport sedan, it’s worth a hard look in this very crowded market.

Users ranked 2017 Jaguar XE against other cars which they drove/owned. Each ranking was based on 9 categories. Here is the summary of top rankings.

Have you driven a 2017 Jaguar XE?
Rank This Car

Is Diesel Engine Cars Good To Have

I have a car listed for sale on this site, the customer wants to do a test drive. What do you suggest is the safest way to accomplish this.

I Need To Change Cover Photo

The wrong photo is posted